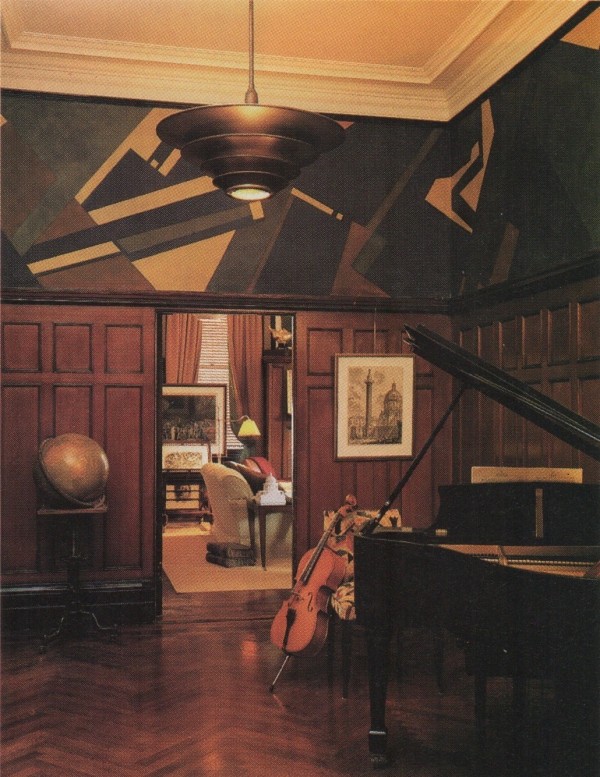 Architect and decorator Thierry Despont is finally getting his due. Or, perhaps, it’s just a case of a passionate aesthete doing his life’s work happily without much fanfare. Whatever the case, I have long admired his work but remain dismayed by lack of accessibility to his near-forty year ouvre. Even his own website has little to suggest that he has created magnificent properties, from the ground up, inside and out, for some of the world’s heavy hitters, including the Gutfreund’s, the de la Renta’s, Ralph Lauren, Calvin Klein and Leslie Wexner. But alas, Vanity Fair published a wonderful tribute in their Holiday Issue to his genius as architect and decorator, with special focus on two prestigious current projects for the Ritz Paris and the conversion of New York’s iconic Woolworth Building tower into trophy residences.

Apparently, Thierry Despont likes to keep a low profile. I can think of only two publications that have featured his work: American House & Garden and the long defunct Maison & Jardin. In my post Passion-Discipline-Savoir-Faire I featured the Maison & Jardin publication of a classic-modern home Despont refurbished from the ground up somewhere in the Pacific northwest. Its interiors reminded me of another house featured in an American magazine. I discovered, after rifling through old issues of House & Garden, that my memory pointed to Despont’s own New York apartment. I had intended to follow the Maison & Jardin post with it … but time slipped away, and so did the magazine back into its place.

I featured the following image in my post The Men’s Room, an interior indicative of a learned man who enjoys the arts and travel, and the occasional game of billiards. But, as the saying goes, looks can be deceiving. At the time of publication in House & Garden in 1991 Despont shared the apartment with his then wife, Anne, and two daughters, Catherine and Louise. To the contrary, this was a family home, not a bachelor’s pad, despite the evidence leading us to believe so – the clubby Edwardian-style paneled rooms, iconic modern furniture, Constructivist art, architectural renderings and a sober scheme of mellowed off-white walls seemingly stained by years of tobacco smoke and furniture covered in brown and black leather and simple natural cotton. All but for one dramatic flourish, the gold curtains revealing a shock of peridot lining, we are witness to a masculine point of view. But then this was the early 1990’s, the decade of the power suit (think Armani) and powerful women (think the fictional Alexis Carrington Colby). A defining moment when women were flexing their masculine muscle. Or was it really only the case of architect creating home as portfolio.

Yet, contradictions there are. Despite the appearance of the Edwardian-style paneling the apartment was constructed in the 1930’s. And despite the interior’s predominantly American point of  view Despont is French. Apparently, Despont welcomes this kind of unresolved struggle. To this task he painted the walls above the paneling in the entrance gallery (top photo) with contructivist forms reminiscent of America’s dislocation in the 1930’s. Perhaps it was his education at Harvard, not the École des Beaux-Arts, that informed many of his architectural and decorative decisions for his Gotham City apartment. A landscape by American artist Derek James spans the dining room doorway, while the billiards table converts to a dining table by flipping over the top. 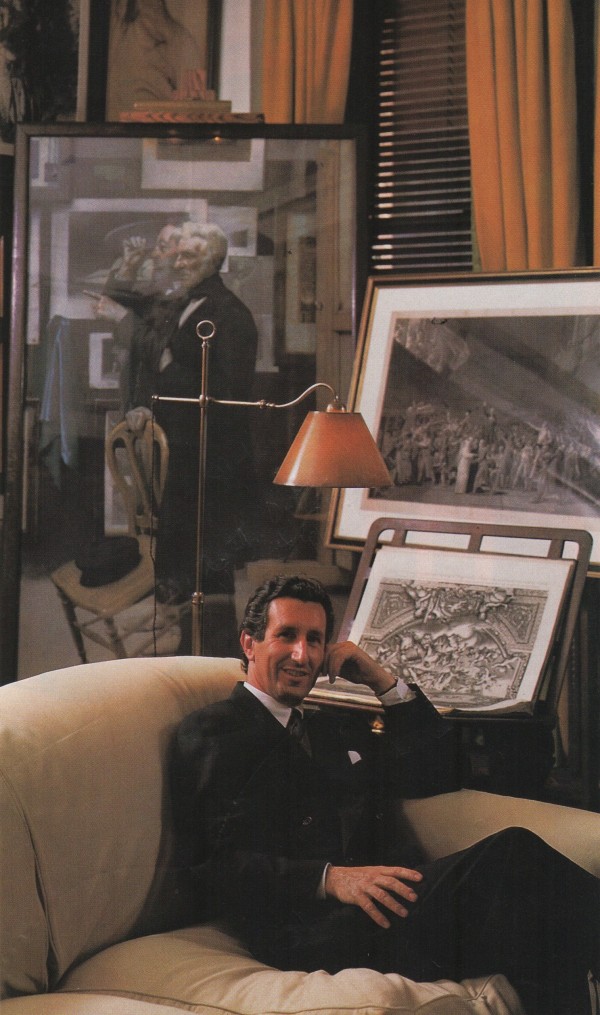 Thierry Despont poses in the living room in front of a 19th-century pastel of an art collector and a curator. 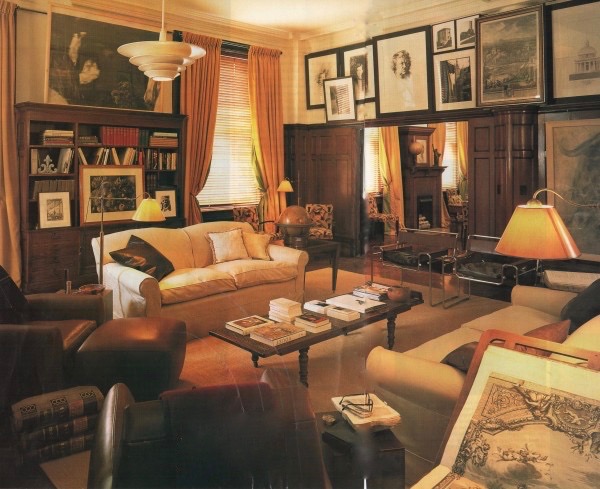 The main salon is reminiscent of a private gentleman’s club, featuring old prints, 19th-century-and-20th-century drawings alongside Despont’s own work hung stacked, salon style, as in the Louvre. A cubic layout of floating furniture includes a pair of facing George Smith sofas, an Anglo-Indian cane campaign bed as coffee table, and Marcel Breuer armchairs facing a pair of Dakota Jackson club chairs. In one corner a pair of French moderne armchairs are covered in Art Deco patterned velvet. The tattletale in the room is the pair of Donghia side tables, which gives the age of this room away. Then again, how many designers are creating neutral spaces today? 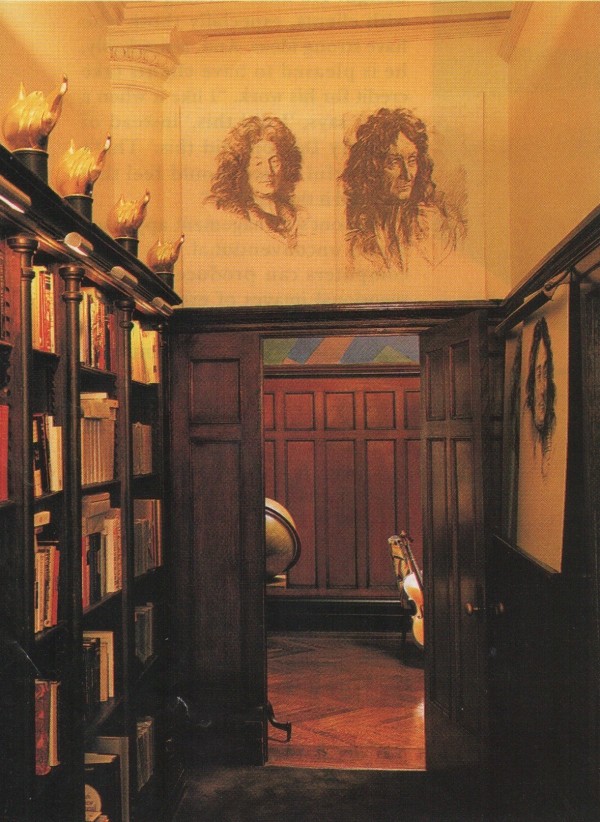 In the bedroom gallery Despont took what could be considered kitsch and made it monumental via repetition: along the top of the bookcase he placed a row of Liberty flame souvenirs. Portraits of French artists and writers are hung on the walls. 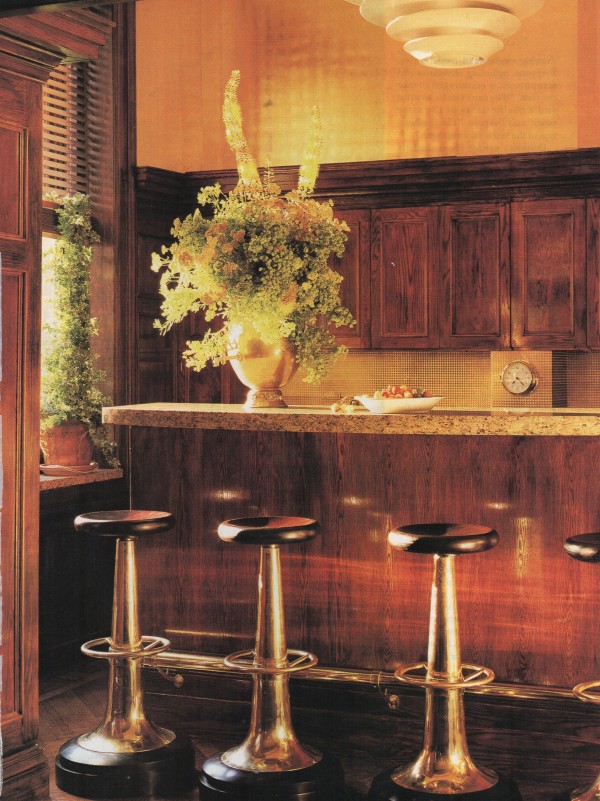 Barstools from a 1930’s Italian yacht  line the kitchen counter and a Bugatti dashboard inspired the gridded brass backsplash. 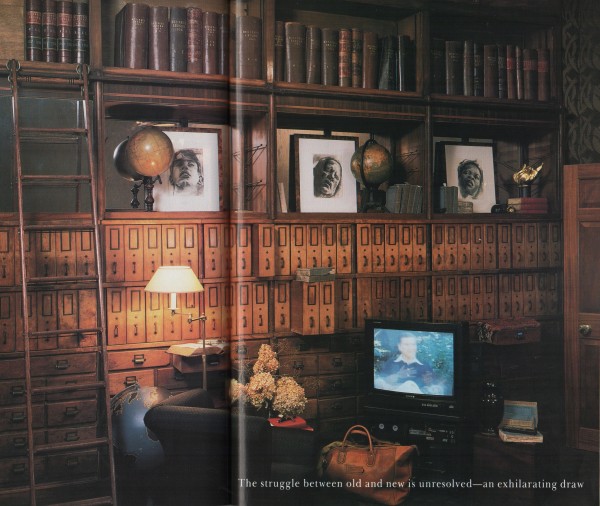 Cabinets from a homeopathic pharmacy were remodeled for storage in the master bedroom. Shelves display drawings by Mike Glier, antique globes, and another Liberty flame beneath old ledgers which recall the apartment’s original use as offices.

2 Responses to The Despont Difference