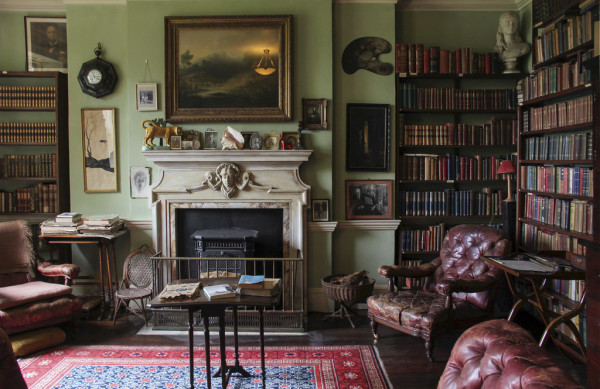 Long ago, before the Man Cave, there was the private gentlemen’s club. In the 17th-century the British male aristocracy formed private clubs in which to meet their peers to discuss business and pleasure, make connections, drink, relax, read … and, yes, escape their wives and family obligations. As the middle class became more affluent they, too, wanted their own clubs. The area around West London became saturated with these clubs, predominantly around St. James Street, which became known as Clubland. While many of these continue the men’s only tradition, many more now accept women as members, as they, too,  have become more affluent.

The “men’s room”, past and present, tend to exhibit a propensity for honeyed wood paneling, mellowed and worn tobacco hued leather seating, and a generally restricted color scheme of camel, brown, black and white – and most any Anglophile’s favorite private club inspired green-and-red scheme. For centuries men and women alike have found comfort in the clubby atmosphere of this timeless aesthetic , recreating its sense of permanence and respect for time-honored traditions in their own homes. Whether  thespian or billiards’s pro, the richly appointed rooms to follow are certain to attract your inner masculine magnetism. 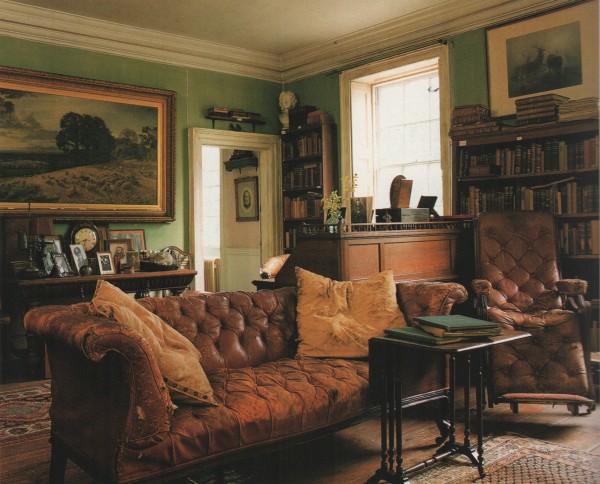 Crumbling leather and piles of books invokes a sense of lived in comfort in the library at Southside House in Wimbledon, London, England. Photography by Tim Beddow. 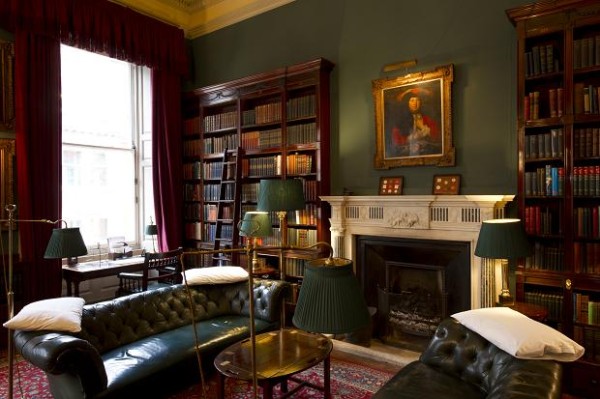 The Smoking Room at London’s Reform Club, originally designed as a library for this 1836 institution, is replete with suites of handsome worn tufted leather upholstered furniture. The World of Interiors, November 1984; photography by John Vere Brown.

Pratt’s Club, since 1841, was purchased by the Duke of Devonshire’s father in the 1920’s, leaving its decoration just as it had always been, replete with sporting trophies, a billiards room and a complete edition of Ruff’s Guide to the Turf, which ultimately found its way to the library at Chatsworth. The main room of the club resides in the basement, featuring an open fire next to the stove where all the cooking used to be done and a game table set for cribbage. “George”, as all stewards and other members of the staff are called, sits at his desk. From “Pratt’s: The Most Famous Private of Clubs” by the Duke of Devonshire for House & Garden, March 1986. Photography by Christopher Simon Sykes. 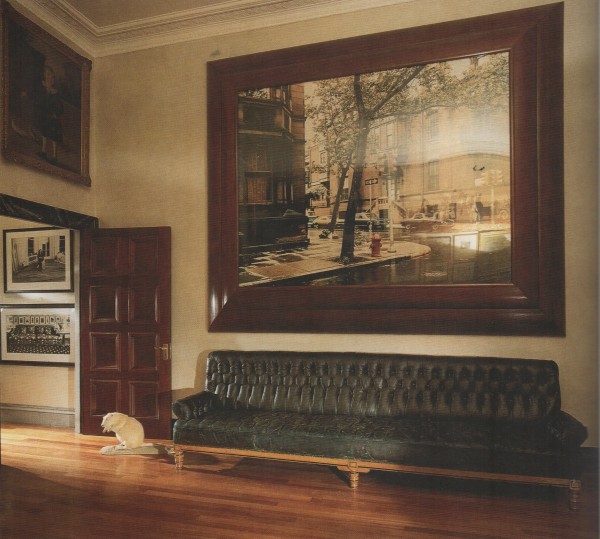 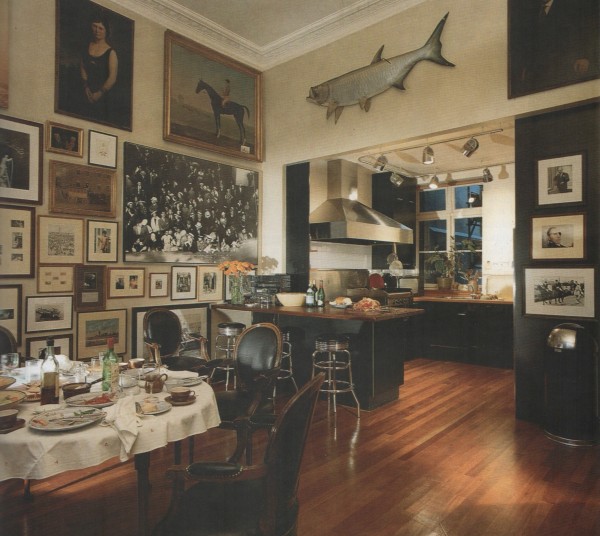 In a London flat decorated by Christopher Hodsoll a large photograph of a street in Philadelphia hanging above a billiard-room sofa and family pictures stacked along the walls evokes a private London gentleman’s club. From The World of Inteiors,-September 1987. Photography by James Mortimer. 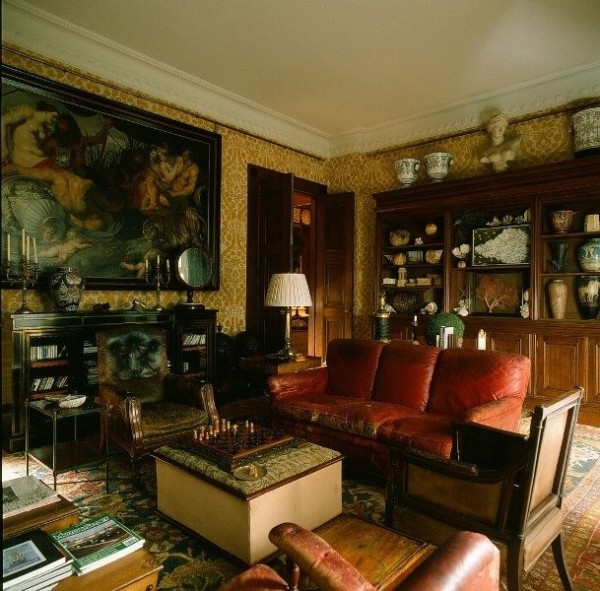 In the antiquarian and decorator’s own Warwick Square flat in London, Christopher Hodsoll tapped into the spirit of the 19th-century aesthete with a passion for books and curiosities. 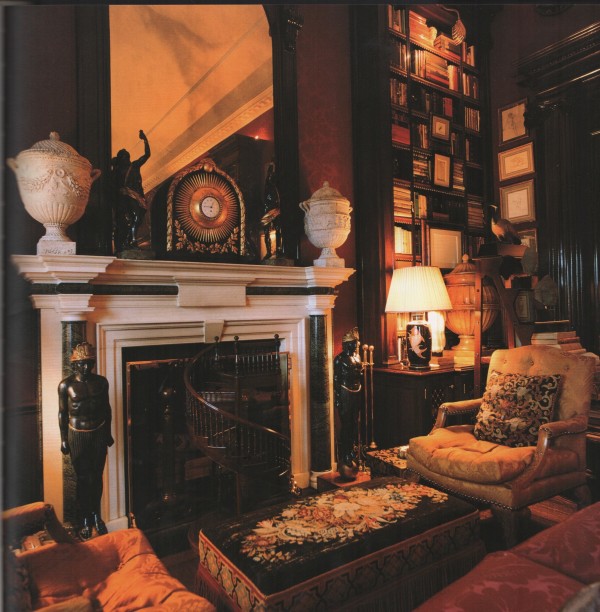 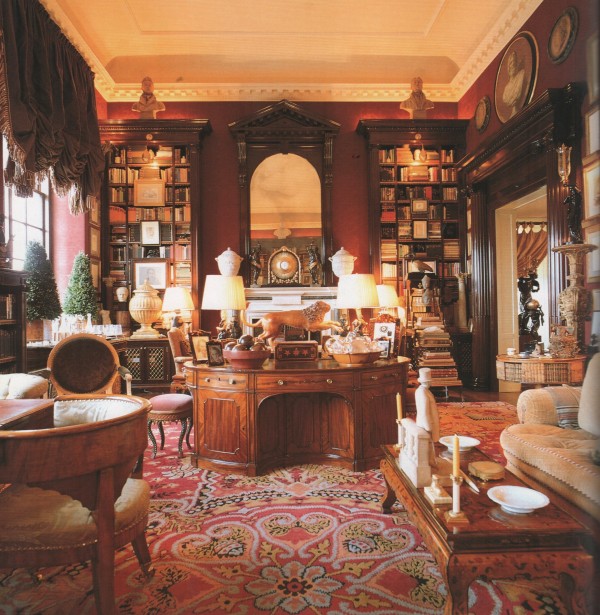 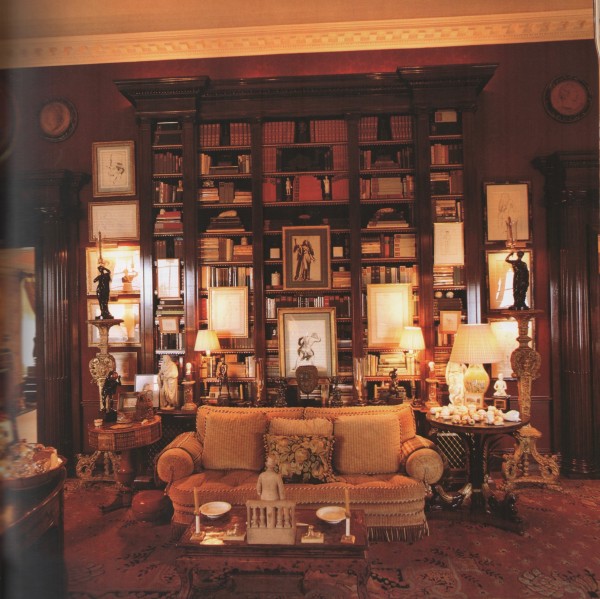 American designer Mark Hampton created an an extraordinary Neoclassical-style library for Susan and Carter Burden’s Fifth Avenue apartment in New York that could have easily been pulled from one of London’s exclusive private clubs. Piled high with books and layered with exotic collections this library would be the envy of many a bibliophile and world traveler. 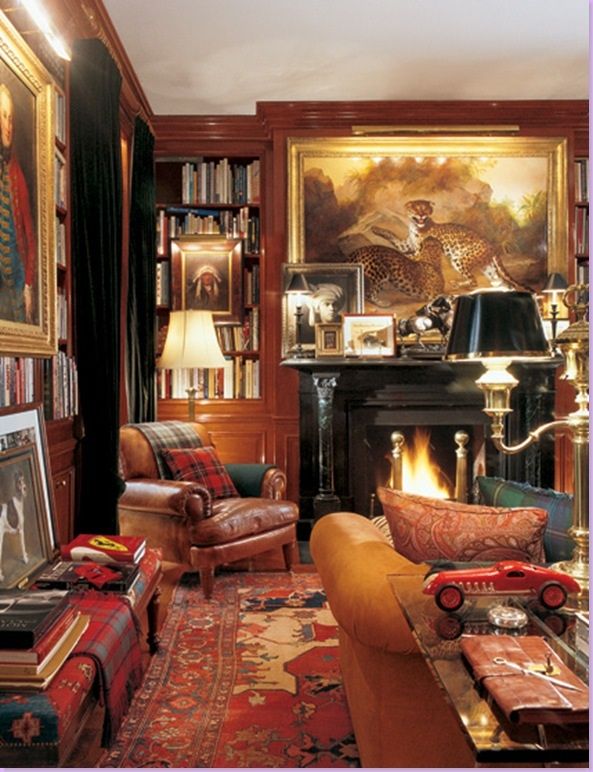 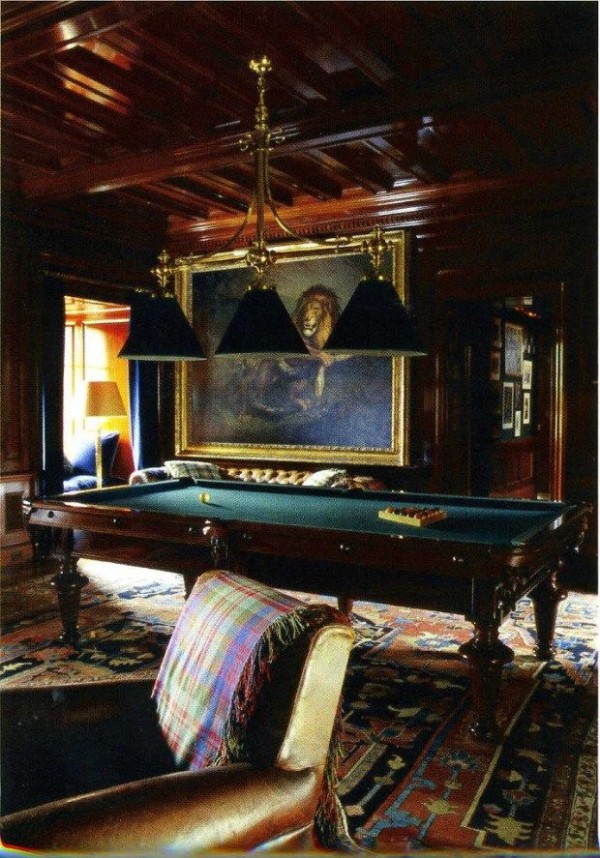 Ralph Lauren also looked to England’s exclusive clubs for the design of his own Bedford, New York, library and billiards room. From Architectural Digest. Photo by Durston Saylor. 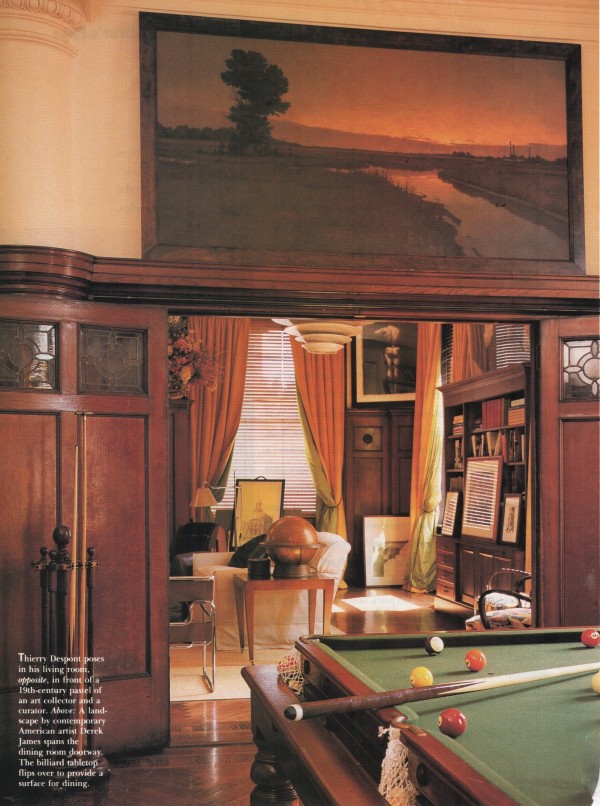 The Manhattan apartment of architect Thierry Despont channels the modern aesthete’s love of books, art, history, travel and sportsmanship in a refined setting that embraces classic and modern design. Featured in the October, 1991, issue of House & Garden, with photography by John Hall. 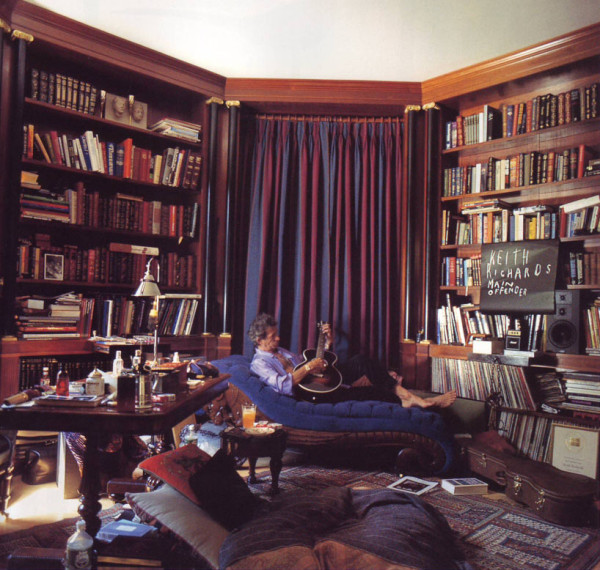 Andrew Lauren announced his bachelor independence in his previous New York apartment outfitted with modernist furnishings, a black and white scheme tempered with wood, and a bar sign. From Bright Young Things by Brooke de Ocampo with photography by Jonathan Becker, 2002. 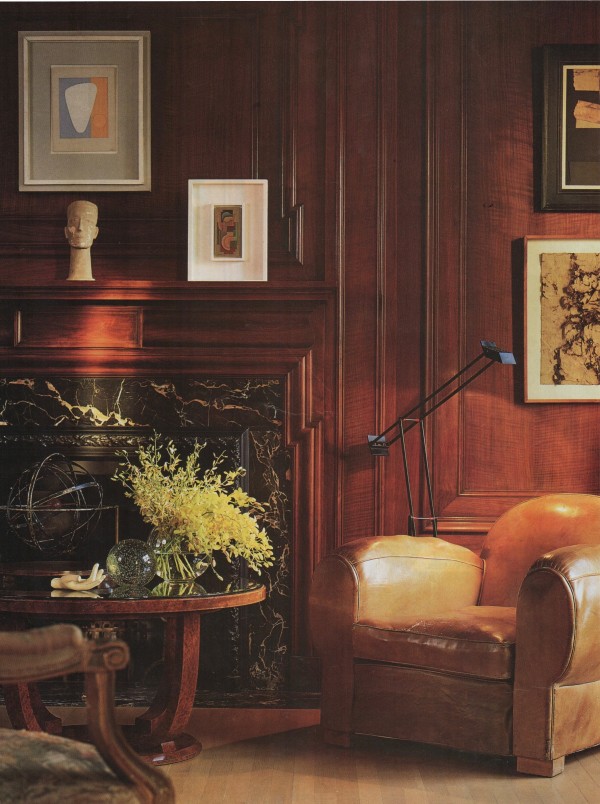 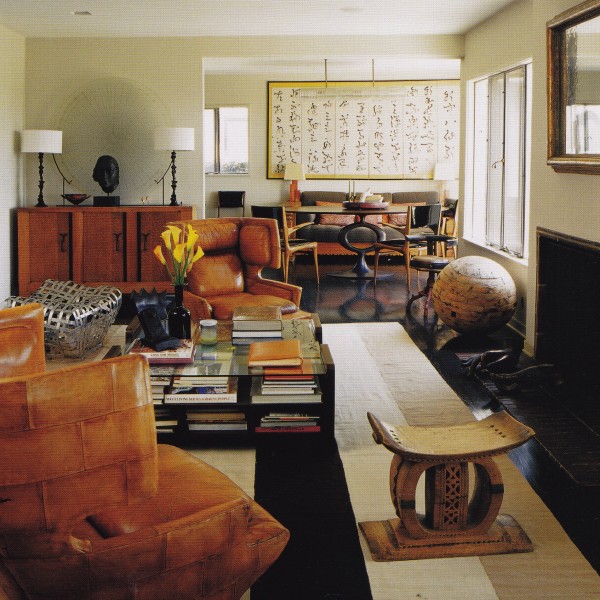 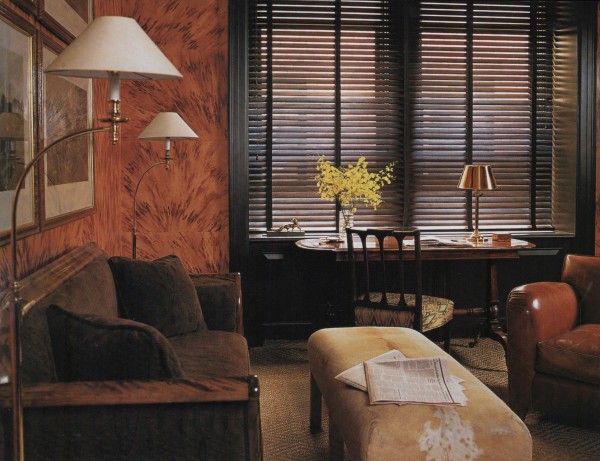 Randall Ridless sheathed the walls of this clubby den with a hand-painted tortoiseshell design inspired by Billy Baldwin’s library for Cole Porter in the Waldorf Towers. Elle Decor, March 2005. Photography by Simon Upton. 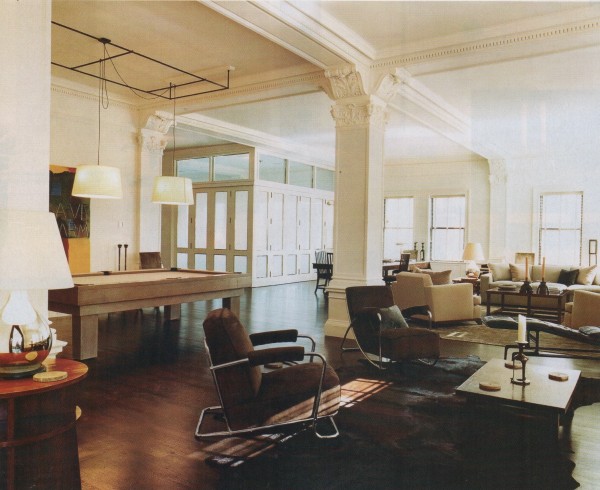 For a penthouse apartment in New York’s  American Thread Building designer Thomas O’Brien  combined a masculine Machine Age aesthetic with contemporary forms in an open loft-style plan for a bachelor to relax and enjoy a game of pool with friends. House and Garden; photography by François Halard.

In his own New York apartment Thomas O’Brien layered collections, art, his own renderings and personal ephemera in the spirit of the 19th-century collectors, reinterpreted with a modern point of view. From American Modern: Thomas O’Brien; photography by Laura Resen. 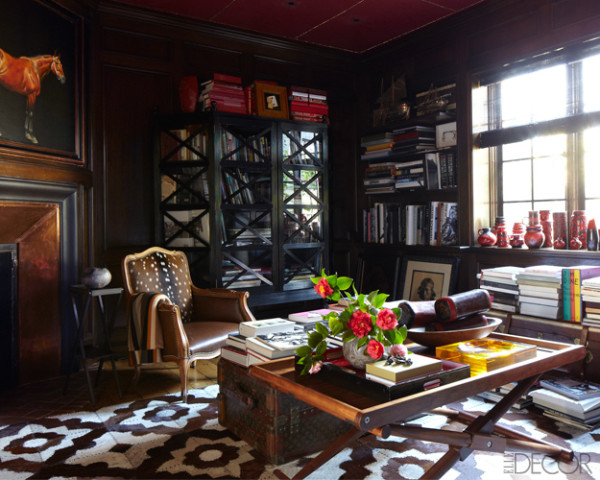 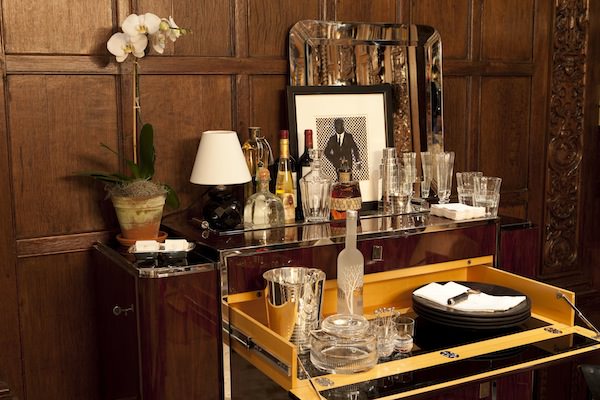 Ally Coulter layered masculine forms, past and present, in this clubby paneled den she decorated for the 2012 Holiday House. 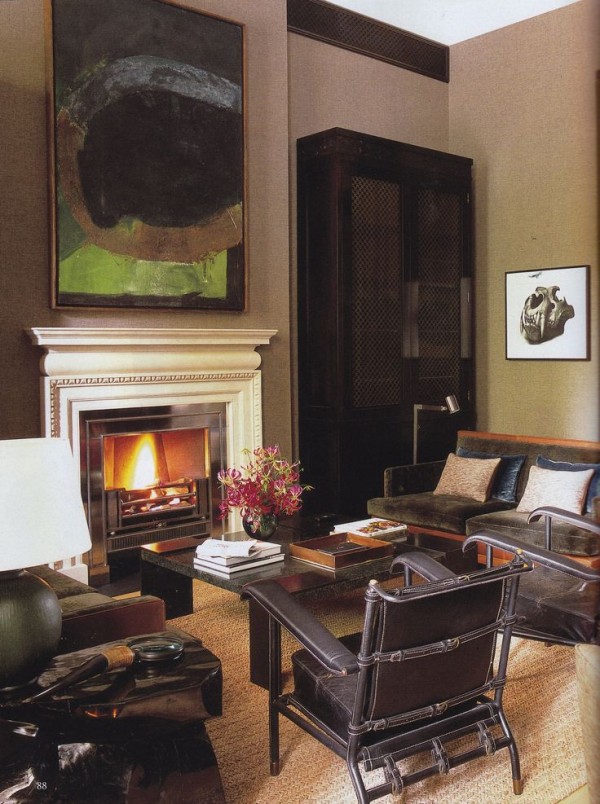 For a London flat Jonathan Reed layered sober modern forms, natural materials, and handcrafted objects with a palette inspired by nature. The World of Interiors, March 2015. Photography by Simon Upton. 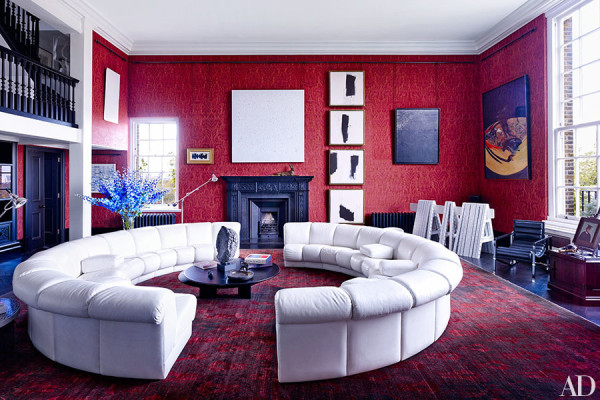 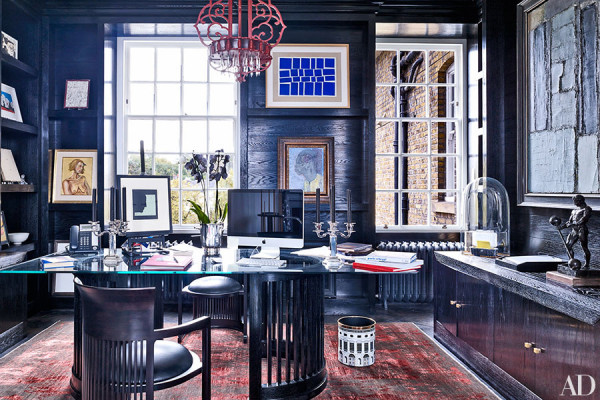 Roubi L’Roubi’s Veere Grenney-designed penthouse in London is a modern take on the 19th-century cabinets d’amateurs. Architectural Digest, May 2015. Photography by Björn Wallander.