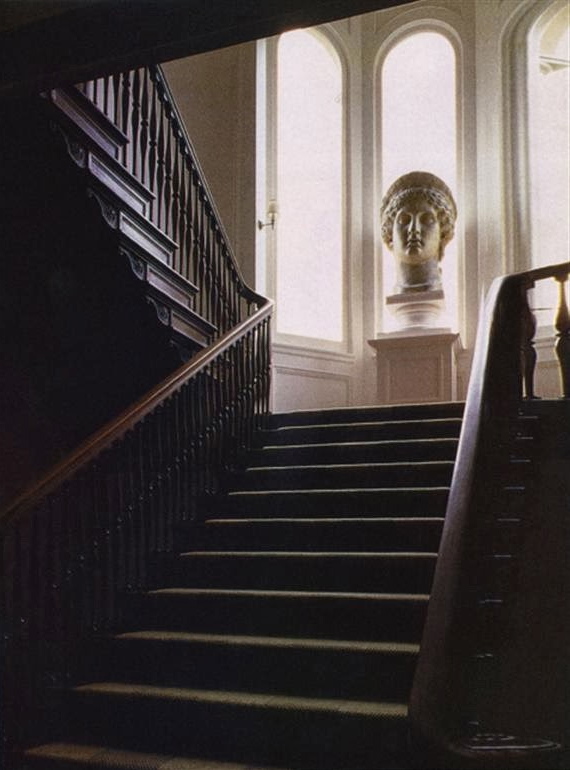 “Passion, discipline and savoir-faire”: these are the three guiding principles of master architect and designer Thierry Despont. Tucked away in the shelves of my studio’s books cabinet I rediscovered a spread  that has long been on my mind since I first discovered it in 1995 in Maison & Jardin, that wonderful publication that met an untimely end. By 1995 an English version was available; I was living in Los Angeles and would count the days for its appearance at the news and magazine stand on Robertson Boulevard. Since then, I have moved so many times that I still rediscover books and magazines that got filed away in boxes. 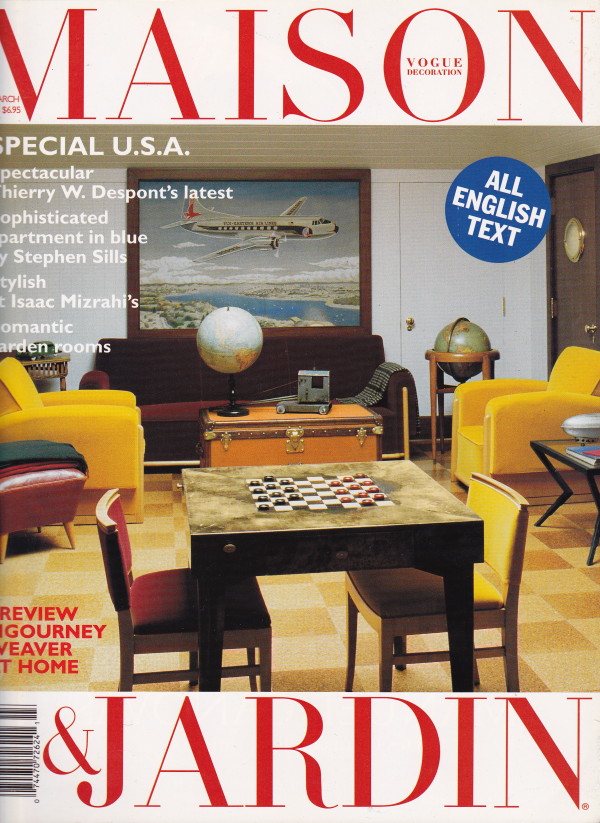 Thierry Despont has remained low on the design world’s radar, with only rare publication of his work here and there. Even his own website sparingly covers his architectural oeuvre. With exclusive and highly private clients the likes of Bill Gates, Ralph Lauren, Leslie H. Wexner and Calvin Klein it’s no wonder. So it is with a good degree of giddiness that I present these images and the story of a house in the western part of the United States that Despont designed in collaboration with undisclosed clients. The formidable house was built in the 1920’s but had been insensitively altered in the 1950’s. Despont’s design program was to demolish everything but the facade to allow its rebirth to embrace an integrated whole in the spirit of master architects of yore who “worked hand-in-hand with artists and craftsmen, creating houses that were architectural works of art, in which the interplay of light and volumes combined with materials and colors to satisfy the wildest dreams … We must listen to the clients’ wishes, understand their tastes and, above all, respect their desires.” Despont and client took dozens of trips across Europe and the United States visiting the flea markets and the Carré Rive Gauche of Paris and the fine antiques showrooms of New York’s Madison Avenue, where they met with artists and commissioned work from craftsman. “It takes a close-knit collaboration and an ongoing exchange between client and professional for a house to be successful. Architecture in not the exclusive domain of architects. it belongs to cultivated people. Memories and dreams make a house a home. Memories of childhood, of trips, of books as well as of desire and experiences. Dreams of life, style and of immortality.” 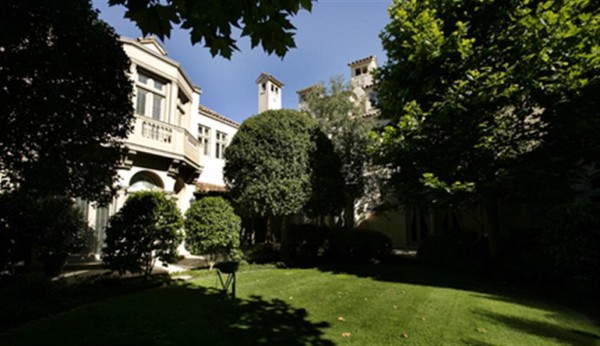 A sober formality is conveyed by the only image of the exterior I could locate, found at Despont’s website. The first photo reveals the monumental staircase, the only element of the interior architecture that was left intact. On the landing is a bust of Juno, found at Christian Sapet in the Marché Paul Bert, Paris.

The main sitting room, at once classical and modern, evokes the timeless style and color palette of Jean-Michel Frank with its walls of waxed honeyed English oak and upholstered furniture simply covered in white linen and gold velvet. African kuba cloth covers some of the throw pillows, a wonderfully textured and bold neutral pattern I still enjoy and use.  At the window is a leather covered Porteneuve chair set between a pair of 19th-century copies of Pompeian bronze urns. The painting above the sofa is by John Register. 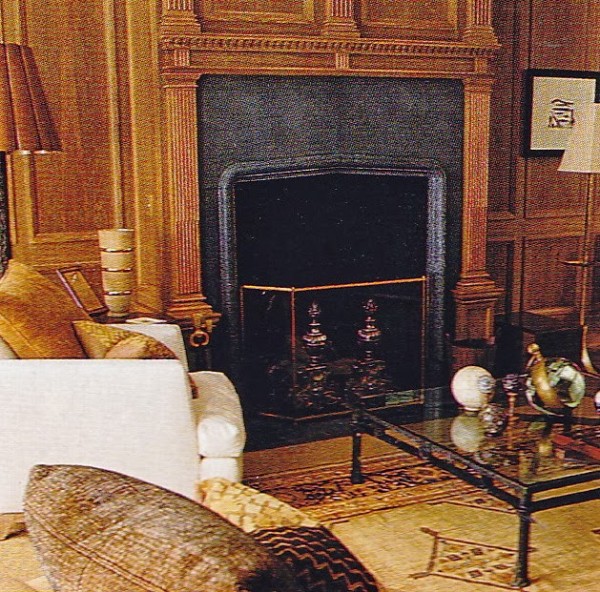 Looking toward the fireplace in the main sitting room a sense of grandeur is conveyed by the pilasters set into the paneling of the fire surround. The silver andirons date to 1877. 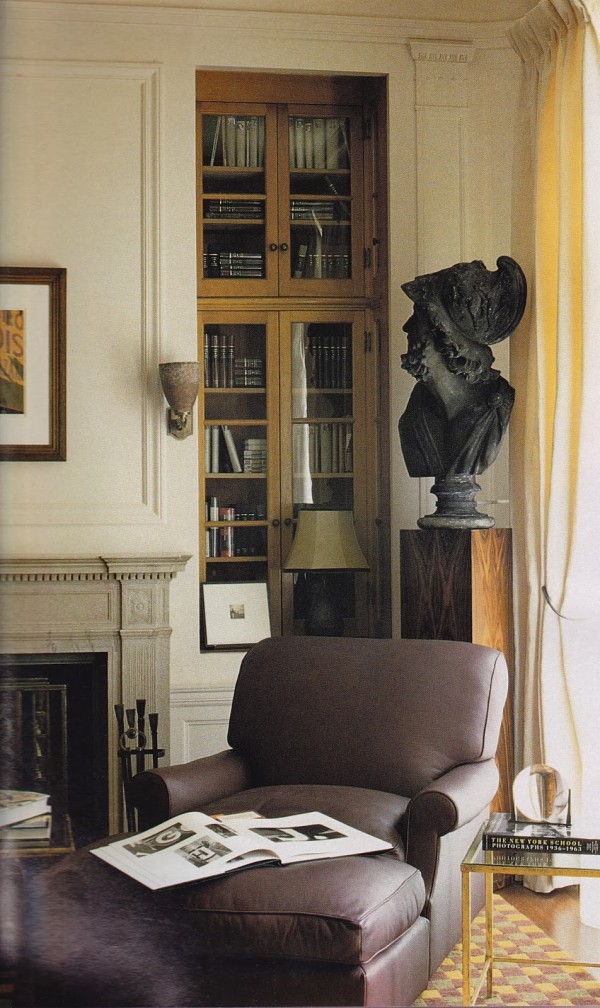 Two views of the study illustrate the great care and craftsmanship that went into conceiving the scale and proportions of these rooms. The paneling, cabinets, shelving, fireplace mantel, and sconces feel as though they had been here since the house was originally built in the 1920’s. The restrained classicism of the room’s architecture paired with understated modern furniture made of luxurious materials hits a subtle note of sophistication that runs throughout the house. The bust behind the leather chair is 19th-century stoneware; the check-covered armchairs are by Jacques Quinet, 1945; the Japanese cypress wood table lamp is from 1930; on the 1930 French walnut desk is a black spherical lamp from 1940; the leopard covered stool is from 1935. The chandelier in the foyer, beyond is by Jean Royère. 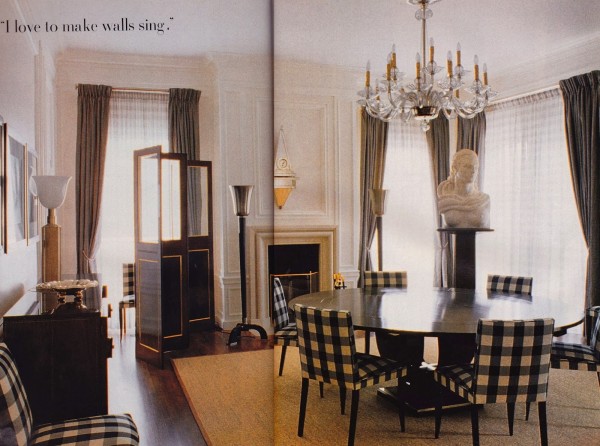 Classical-moderne defines the elegant yet sober dining room, a study in black and white. Checks, apparently, were all the rage but I can’t recall their popularity, and I can’t say I’m a fan of this large-scale version. It reads “gingham” which, for whatever reason, has a bad association. Despont designed the dining table to compliment the Andrey Sornay sideboard from 1930. Flanking the fireplace are a pair of nickel-plated bronze lampshades by Leleu, 1930. Mounted above the fireplace is a French wall clock from 1940. The folding screen is 19th-century; the bust is by Delamarra from Galerie Yves Gastou. 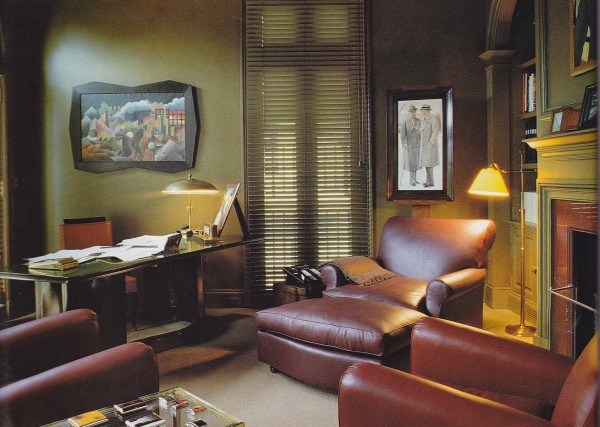 The husband’s somber study looks like a movie set for a Hollywood film set in the 1930’s or 40’s. The painting is by Albert Gleiz, 1911; the 1920 painting on the easel is from Guerin Antiquaire.

The lady’s study has pine paneling set with panels of goffered flannel … and more of that black-and-white checkered fabric from Manuel Canovas. A chair from the S.S. Normandie is pulled up to a Biedermeier desk. The armchairs are 19th-century English. The chandelier is 18th-century French. 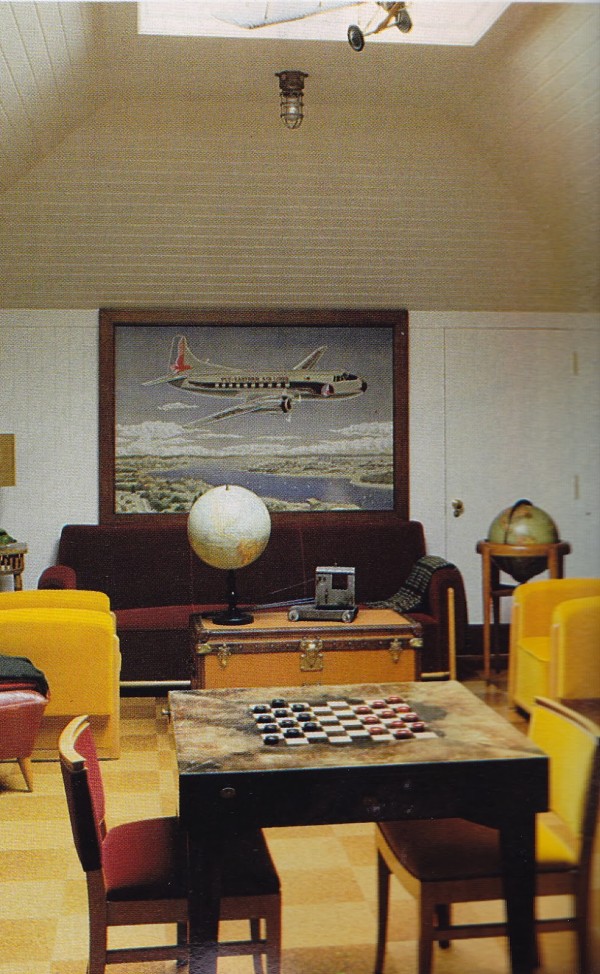 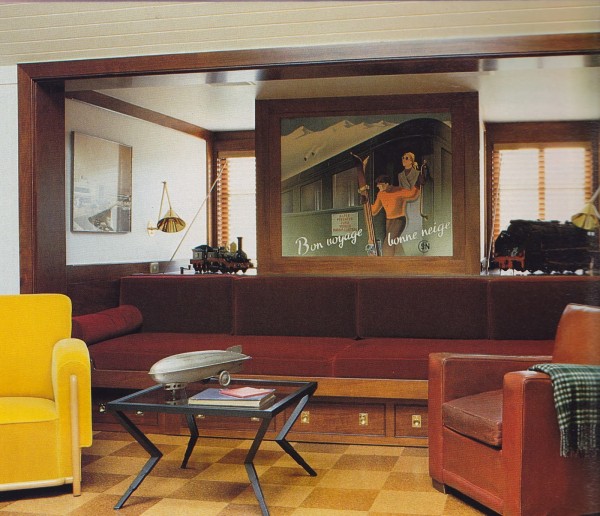 America’s love affair with Art Deco crescendoed in the 1990’s, nowhere more obvious than here in the den, another virtual movie set replete with a zeppelin model from 1930 sitting on a Stockar Czech-style coffee table, and model trains from 1925 setting behind a sofa from the 1930’s. Elsewhere in the den are globes from the 1950’s and a vintage photograph of La Guardia airport, representing the period’s fascination with travel.

Donald Deskey was the inspiration for a child’s room with a custom bed and rug designed by Despont. The armchair is 1920’s French. The chest and mirror are by Deskey. 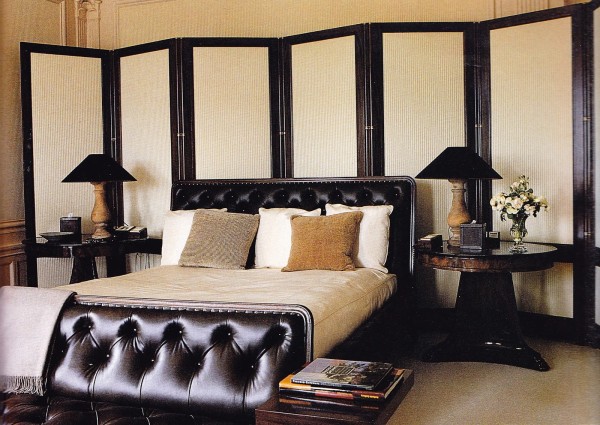 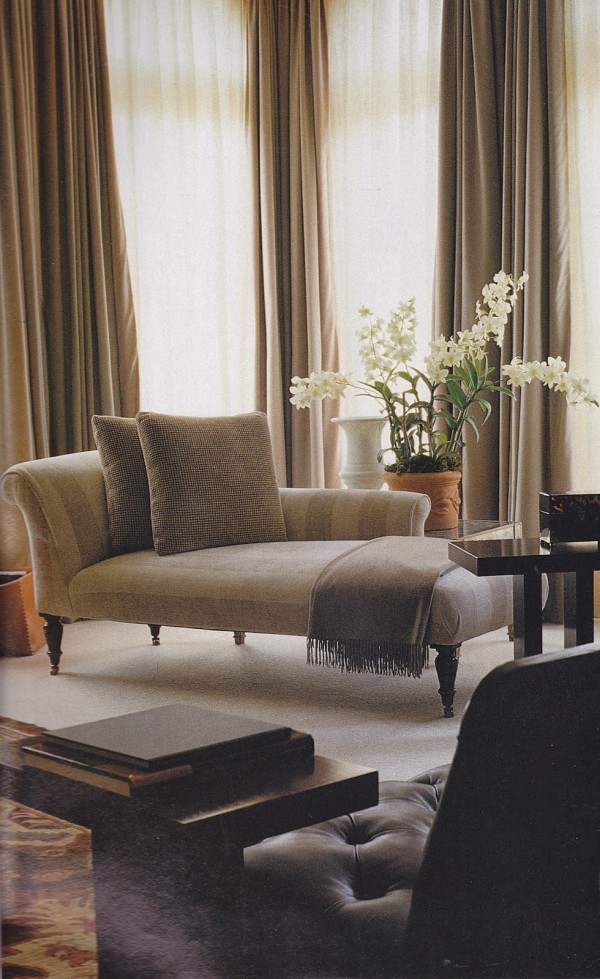 Despont designed a large multi-panel upholstered-and-wood-framed screen as a backdrop to a custom leather-padded headrest, which matches the 19th-century tufted leather loveseat from Christopher Hodsoll at the foot of the bed. A pair of terra-cotta base lamps are set on a pair of Empire pedestal tables with marble tops.  In a sitting area of the master bedroom is an English sofa from 1880 paired with one of two English Art Deco tables. 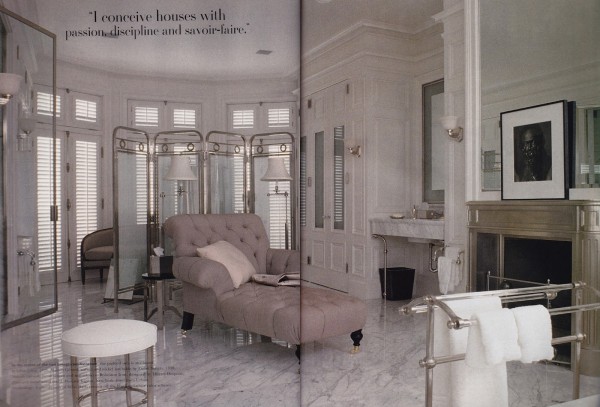 In the vast and well-appointed master bath a chaise longue attributed to Leon Jallot, 1926, takes center stage. Pulled up behind it is a walnut and nickel low table by André Sornay, 1930. Despont designed the metal screen and mantlepiece. The black-and-white photograph is of Miles Davis.

Tomorrow I will follow-up with the luxurious subterranean pool and spa Thierry Despont fashioned for this impressive project.

This post was based on an article written by Françoise Labro for Maison & Jardin, March 1995, with photography by Pascal Chevallier.