With a view across the Strait of Gibraltar to the coast of Spain, Villa Mabrouka, Arabic for “The House of Luck”, is a peaceful walled complex set into a lush landscape perched at cliff’s edge, a mere five minutes from the labyrinthine souk in the Medina of Tangier. Yves Saint Laurent and Pierre Bergé purchased the villa in 1998 after selling their beloved Villa Oasis and guest house Dar es Saada. 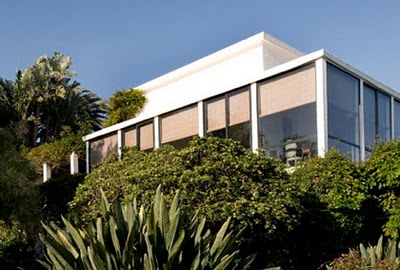 by an Englishman, Villa Mabrouka is a contemporary villa with open spaces and soaring volumes, awash in natural light. Absent are rooms taken straight from the Arabian Nights, layered with tedelakt wall finishes, intricately carved and inlaid wood-paneled surfaces, and elaborately patterned zellige (Moroccan tile) fireplace mantels, floors and walls that interior designer Bill Willis introduced into Villa Oasis. Almost entirely absent is the partners’ collection of Syrian furniture. Nor will you find Berge’s beloved Orientalist paintings or Saint Laurent‘s beloved Matisse’s.“Those are in the Museum of Modern Art in New York and the Hermitage in St Petersburg. You can’t put worthless things on the walls. It’s better to have nothing at all.” explained Bergé. What you will find is an economy of means, rooms that breathe in light and color. Exotic eclecticism has been traded for a spare elegance and quiet comfort by longtime friend and interior designer Jacques Grange. 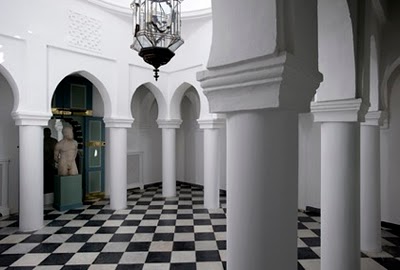 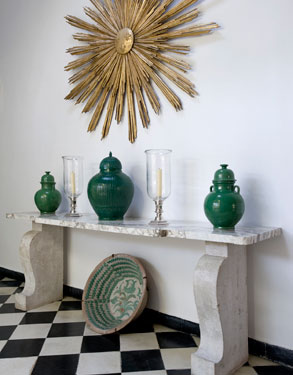 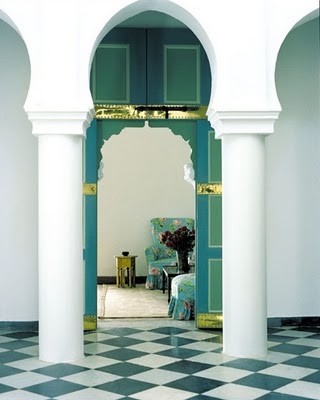 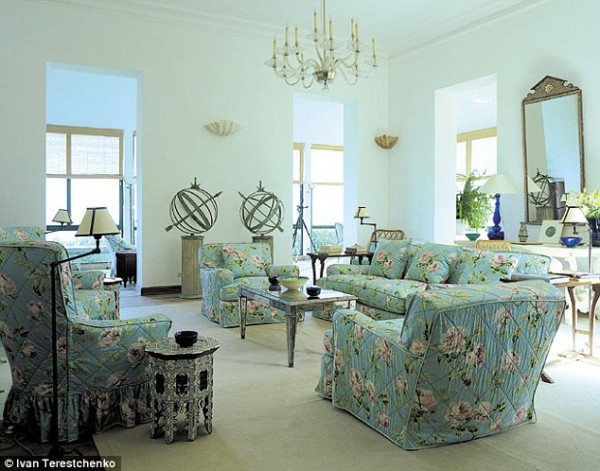 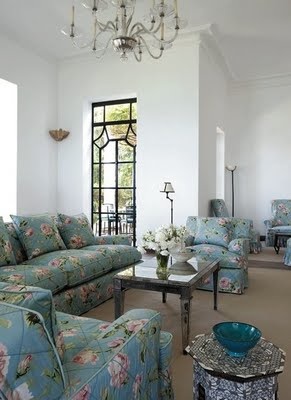 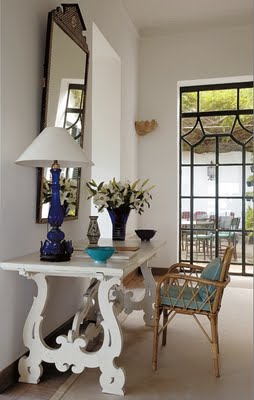 “The interiors pay homage to the Anglo-American presence in Tangier” says Grange in his eponymous design tome by Pierre Passbon. Brightly colored, pretty cotton chintz covers the upholstered furniture in the salons. The overall color scheme was limited to mostly pale blues and yellows with shots of pink and green here and there, set against bright white plaster walls, black mullioned windows, and the simplest of woven area rugs underfoot. These rooms, bright and cheery, could easily come from a villa on the Amalfi Coast or the isle of Capri if we didn’t know better. “It was like decorating a house for people out of a play by Tennessee Williams,” says Grange. “We based it on the house of an eccentric Englishman who moved to Tangier in the 1950’s” – which may not be far from the truth, given its provenance. 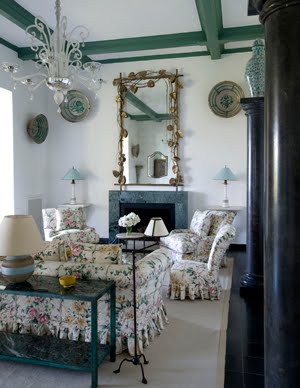 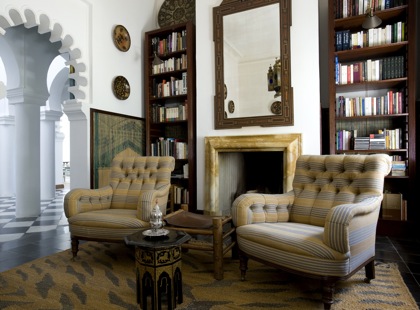 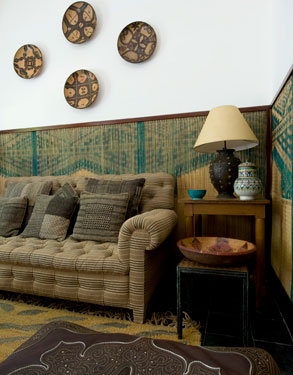 Warmer tones, Saharan pottery, stenciled grass cloth on the walls, and African textiles in the library injects a masculine counterpoint to the adjacent light filled and more feminine rooms. 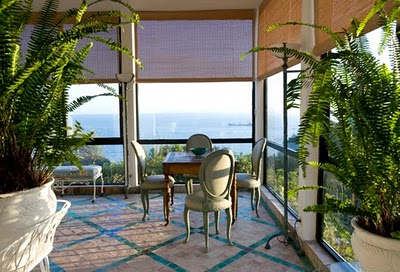 Walls of glass in the conservatory afford views across the Strait of Gibraltar toward the coast of Spain. 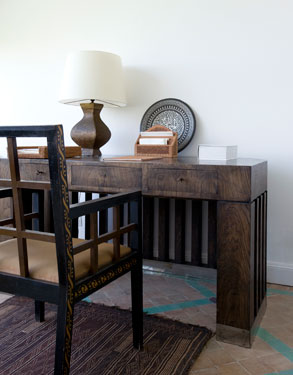 A gutsy and modern desk and chair in the conservatory, its floor identifiable by its diamond patterned criss-cross design in green. 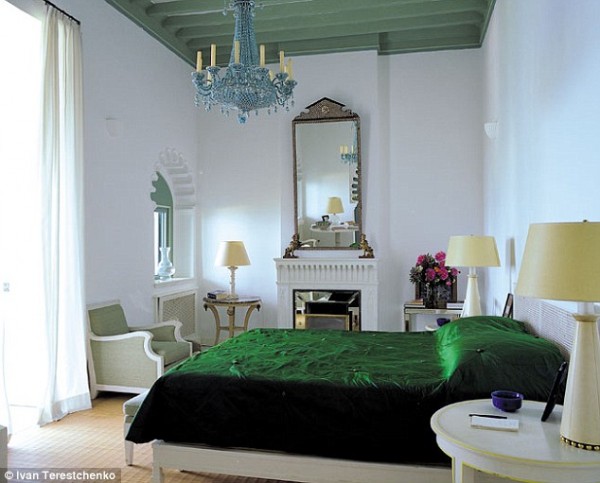 An emerald green bed cover and paler green painted ceiling in a bedroom with white painted furniture and a shot of yellow on the fauteuils seat cushions resembles a guest suite at La Sirenuse in Positano, Italy. 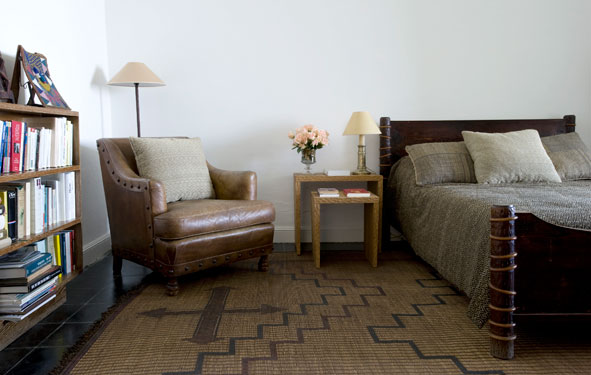 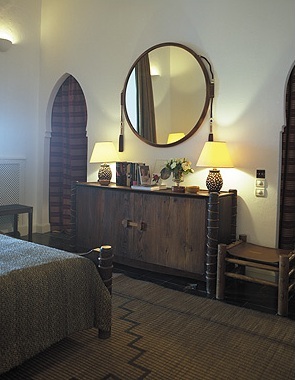 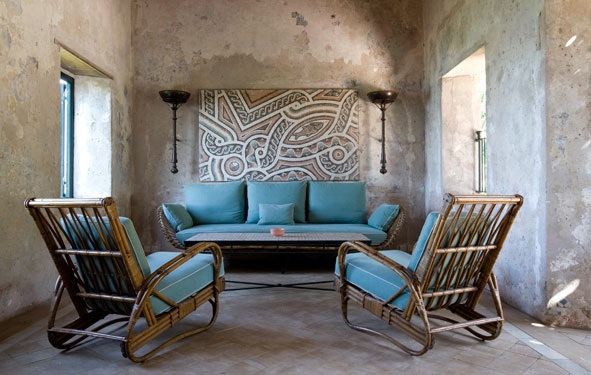 Raw and minimal by design, this pavilion offers a cool respite from hot summer days. Vintage bamboo furniture has cushions covered in turquoise cotton, while a wall showcases an abstract primitive style artwork flanked by a pair of wall-mounted bronze torchieres. 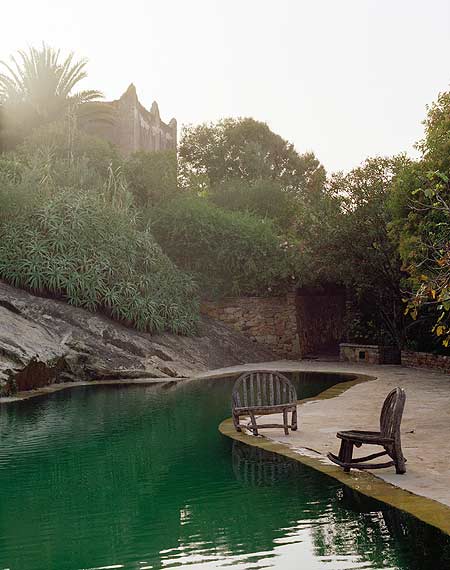 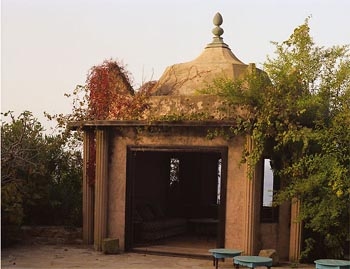 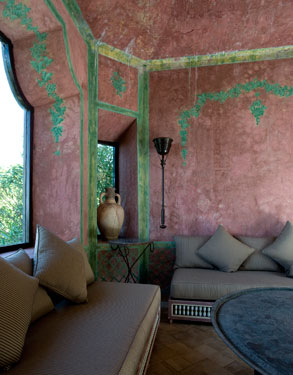 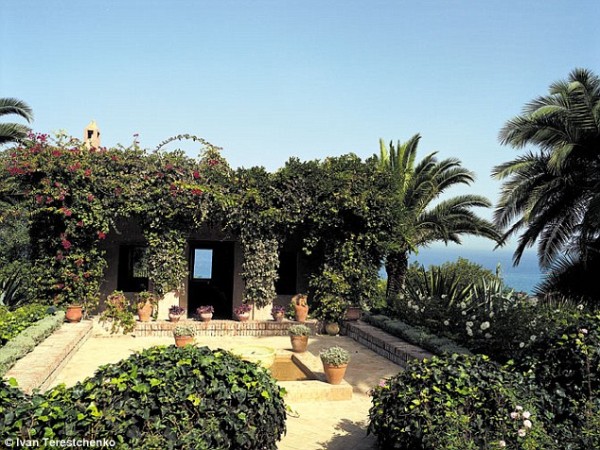 The espaliered garden by Madison Cox includes imported lemon trees, rolling lush lawns, fountains and a Moorish pavilion that, according to Grange, has served tea for passing visitors the likes of Marguerite McBey, Paul Bowles and Cecil Beaton. A biomorphic swimming pool carved into the rocks appears natural to the environment.