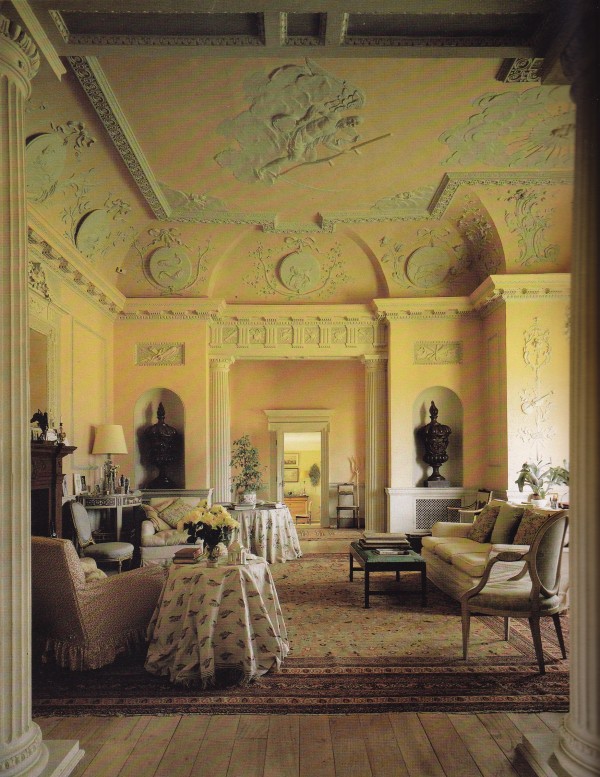 The late architectural historian and writer Gervase Jackson-Stops is probably most remembered, in our contemporary virtual world of visual literacy, for the single extraordinary room he restored and decorated for himself at The Menagerie, his grand folly at Horton in Northhamptonshire, England. The one-story structure with flanking pavilions is attributed to Thomas Wright, designed as an “eye catcher” for the Earl of Halifax in the 1750’s.  Jackson-Stops discovered it in 1972 and made it his life ambition to restore what was for him an architectural dream, one of England’s finest Rococo plasterwork rooms.

The drawing room was in derelict condition when Jackson-Stops purchased the folly, with much of the plasterwork representing medallions of the Signs of the Zodiac, Father Time and the Four Winds crumbling if not missing. By providence the Menagerie’s new owner was friends with Christopher Hobbs – the gifted sculptor famous for his garden statuary, painting and film and exhibition designs  (See The Cabinet of Wonder and The Cabinet of Wonder Part II) – who committed himself to the free-hand decoration of the missing zodiacs Aries, Cancer and Leo and restoration of the remaining six.

During renovations it appeared only two layers of color had ever been applied – an overall stone color laid over with a pink and grey scheme – which Christopher Hobbs exacted and refreshed. He also painted over the mantel in trompe l’oeil porphory to compliment the plaster urns rendered as bronze, replications of the originals as seen by Horace Walpole, also executed by Hobbs. Amidst the frothy envelope of pink outlined in gray I can’t imagine the four niches of this room without the grounding presence of these magnificent sculpted dark accents.

The original intention of this space was not for living but for afternoon dining. Dark mahogany chairs would have lined the walls until they were pulled up to tables set up for lunch. To create a comfortable living space Jackson-Stops consulted an old friend, Melissa Wyndham, to assist with upholstery and curtain selections. The rest of the furniture came from his family’s collection (his grandfather, Herbert Jackson-Stops, founded the eponymous and up-market estate agency in London). Though I have an aversion to draped tables (they have always seemed to me a lazy substitute) I concede this photo was taken, I assume, sometime in the later 1970’s when they had greater appeal. I do find pleasure in the personal appointments – the cozy fireside arrangement; the unframed sketches casually arranged on the chair rail above the demilune; the fresh flowers; and the bench piled with books. And, to this, add the bare untreated wood floors, giving this folly true English country house style and appeal. One room: The Art of the Room! 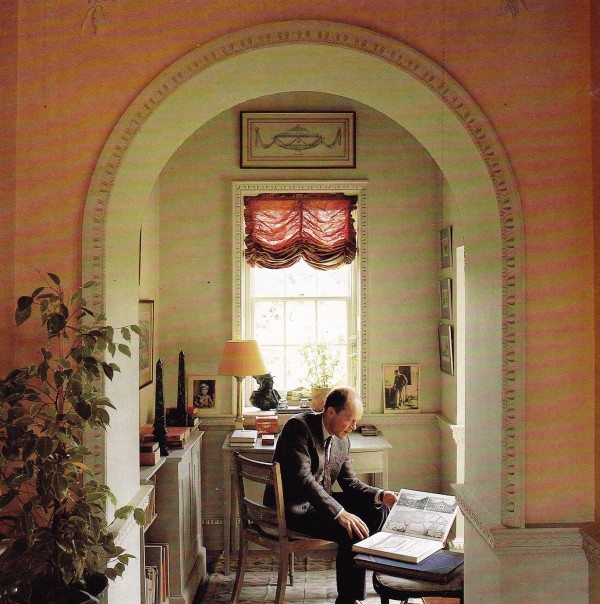 Gervase Jackson-Stops in one of two lobbies he created to work and read adjacent to two new spare rooms he added on to the dwelling.

From The Englishman’s Room, published 1986, with photography by Derry Moore.