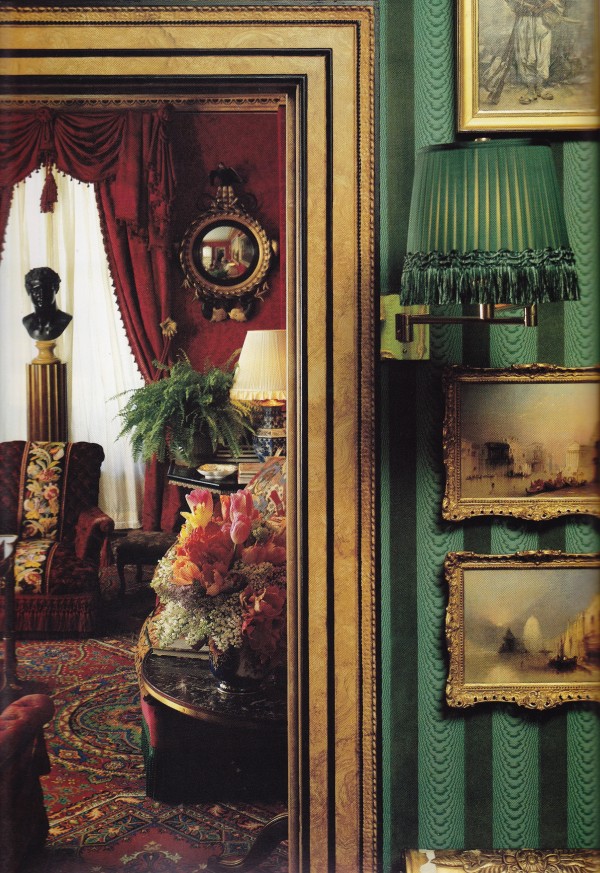 As Oscar de la Renta’s career skyrocketed in the 1970’s so did his lifestyle. Sometime around 1980 he and his then-wife, the late Françoise de Langlade, traded up from their previous apartment, which I featured in Oscar de la Renta: New York, c1970’s, to this much grander apartment overlooking Central Park on the Upper East Side. Firmly established in New York society, Françoise was considered a legendary hostess, entertaining the rich, the powerful, the beautiful and the gifted. It was not unusual for them to throw two dinner parties a week, salon-style, in these richly appointed rooms crafted by Robert Denning and Vincent Fourcade. These rooms opulence speaks to the power couple’s place in New York society during an era when entertaining was less about having fun – as with the disco craze of the 70’s – and more to do with bringing together influential people in the privacy of one’s home. The 1980’s, after all, were all about money and power! And for that order Denning and Fourcade created a sumptuous background for high style entertaining, inspired by late-19th-century eclecticism. 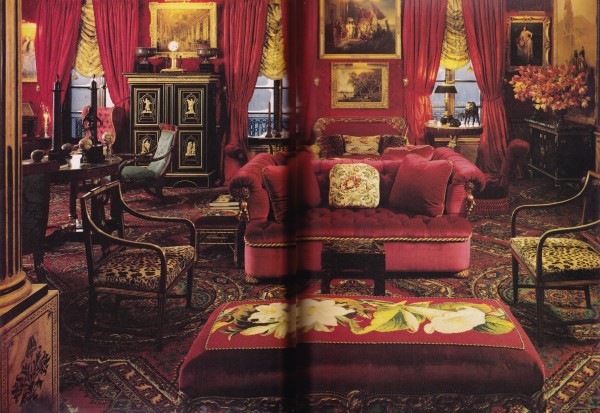 Scarlet red velvet and custom Napoleon III Turkish-inspired carpeting sets the tone for the richly appointed living room featuring a mix of Russian neoclassical chairs, French cabinets in the style of Boulle, and antique Victorian woven fabrics. The snow settling into the window panes outside incites a feeling of pampered luxury within. 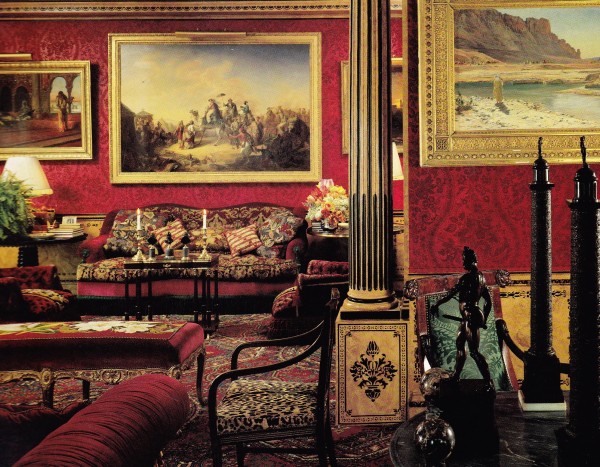 Hanging above a sofa covered in antique Victorian plush is A Royal German Family Traveling in Egypt, 1864, by Johann Hermann Kretschmer. 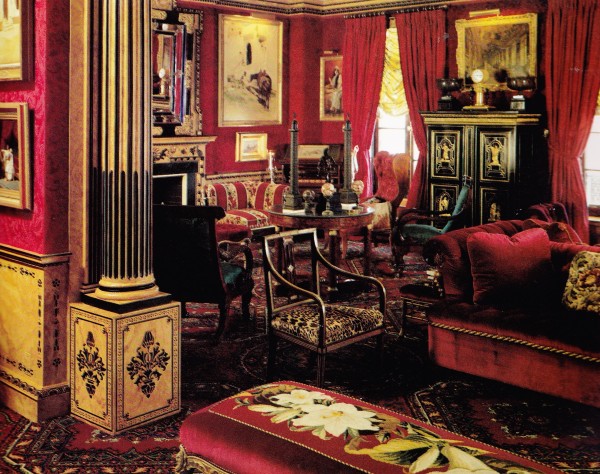 Vincent Fourcade added the faux bois columns, creating an alcove seating area off the main living area. Pairs of bronze 19th-century models of columns dress tables, based on the Colonne Vendôme. The blue-glass mirror above the faux bois fireplace is 18th-century. Trompe l’oeil, after all, was the word in decorative painting in the 1980’s! 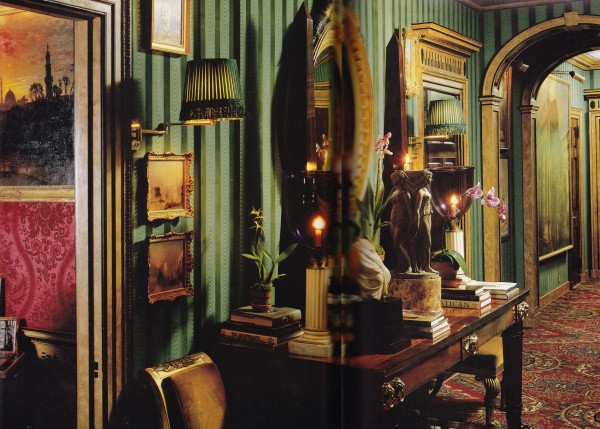 A Regency mirror with crocodiles, a 19th-century library table, Russian hurricane lamps, and a pair of Egyptian-style Empire chairs line a wall of the moiré flocked front hall. 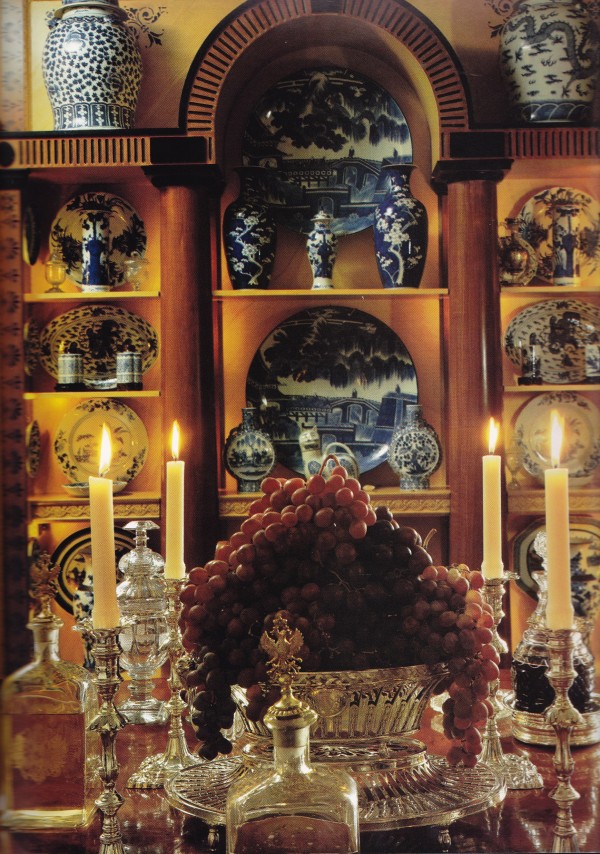 In a photo taken prior to Françoise’s death in 1983, dramatic and massive blue-and-white ginger jars flank a window in the faux bois-and-mirrored dining room – the elegant table setting a testament to her high standards and taste for elegance. 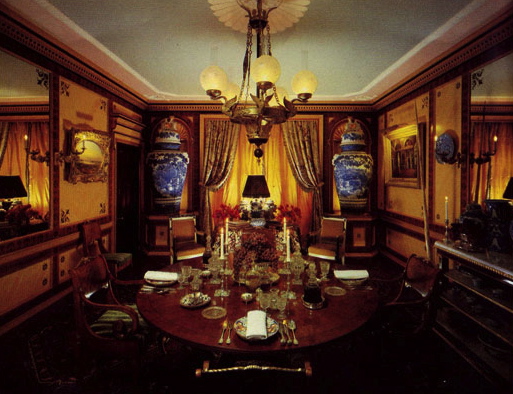 In this photo from Oscar de la Renta online the foreshortened affect  makes the room appear smaller than it is.

Denning and Fourcade created Oscar’s bedroom suite after the death of his wife, which consisted of a bedroom and sitting room divided by velvet portiéres. Surrounding the Viennese bed are 19th-century landscapes over a Lee Jofa fabric covering the walls.

Our tour of the Oscar’s homes continues with a return to his Connecticut country house after his marriage to Annette Reed.