As a follow-up to the prior week’s last post I will be featuring over the course of this week, as promised, the homes of Oscar de la Renta, who passed away on October 20th after an eight-year battle with cancer. The elegant fashion maestro and his family have inhabited homes in New York, Connecticut, and his native Dominican Republic over the course of his illustrious career. The first of these to be photographed was the New York apartment he shared with his late wife, Françoise de Langlade, photographed by Horst in 1969 for Vogue. As one would expect, these early rooms are so effortless, timeless and stylish that they remain relevant today. The dining room expresses the de la Renta’s love of chinoiserie and a blue-and-white color scheme. Walls, covered in a fabric that mimics tile, is an exuberant foil for their collection of blue-and-white china and porcelains while an exotic coordinating fabric with a stylized animal print decorates the ceiling, a skirted table, and the seat cushion of a chinoiserie-style bamboo chair. 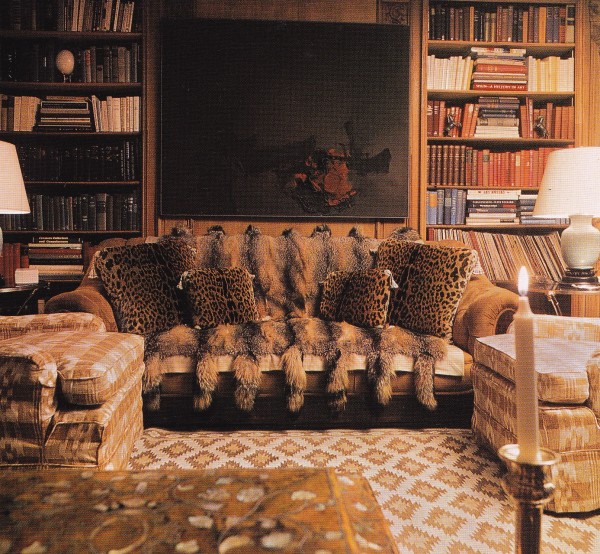 The library, also photographed in 1969 by Horst, offers a mix of traditional furnishings and exotic pairings: a clubby English suede upholstered sofa with leopard pillows and fur pelts is flanked by a pair of armchairs with Ikat slipcovers and an Ikat rug underfoot. The same two rooms were later featured in HORST Interiors by Barbara Plumb, published in 1993. 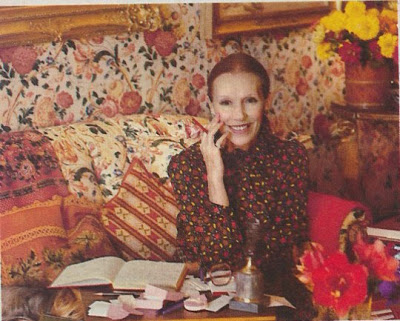 In 1982 House and Garden published a feature on Françoise’s love of entertaining in the couple’s New York apartment. You can glimpse here her passion for flowers, sumptuous textiles and elegant surroundings.

The same article featured this photo of a table in the living room set for tea service inspired by Russian composer and author Nicolas Nabokov. 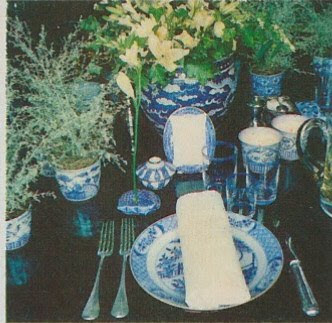 And, here, Françoise set her dining room table with her favorite blue-and-white china. You can read more about this House and Garden feature at Jennifer Boles blog, The Peak of Chic.

This photo of the couple’s New York apartment bedroom photographed by Horst was featured in the September, 1972, issue of Vogue.  Until 1983, Oscar shared this bedroom with his late wife Françoise. The chinoiserie wallpaper was inspired by Pauline de Rothschild’s iconic Paris bedroom, custom made in Hong Kong.

Tomorrow we will return to Françoise and Oscar’s relaxed retreat in the Dominican Republic.