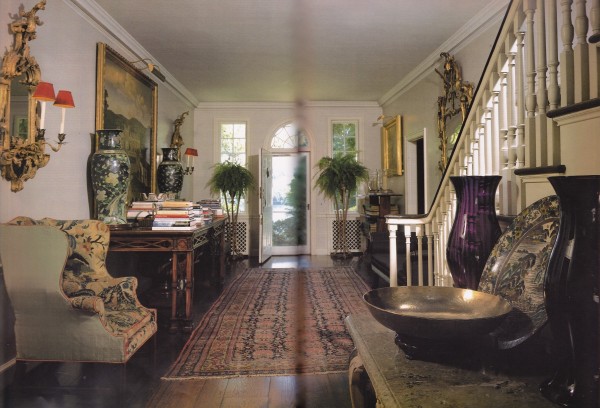 Oscar de la Renta reopened the doors of his country house, Brook Hill Farm, in Kent, Connecticut, again to House & Garden in the later 90’s (I covered the first publication of this property in Oscar de la Renta: Connecticut, 1986). After the death of his first wife, Françoise de Langlade, in 1983,  he married his present wife, socialite and philanthropist Annette Reed, in 1989. Annette had her own country house in Katonah, New York – a grand home of architectural distinction. When the prospect of moving to Oscar’s rather ersatz clapboard colonial style house was presented Annette initially rejected the idea and confided “This house is so hideous; tear it down!” However, she conceded that the property and its views possess great appeal.

The House & Garden feature coincided with the launch of Oscar’s first home collection, Oscar de la Renta Home. Over the years between their marriage in 1989 and the HG publication Annette added her own stamp of high style taste with the addition of her collections of fine early-19th-century European furniture and decorative arts. She also had the floral quotient toned down several notches, covering over the existing Lee Jofa floral chintz that Françoise had put up with a solid  fabric, Colefax & Fowlers Avebury in Terracotta-Blue. In the process, another layer of fabric was added to the walls which, according to Oscar, decreased the size of the room by one inch in all directions. To maintain the Anglocentric atmosphere Bennison’s Roses in Blue chintz covers the upholstered furniture. Over the years Mrs. de la Renta called on various designers for guidance and management of projects but never conceded control to any one given talent. “A lot of decorators have worked on it”, commented Oscar, “because we have so many decorator friends. But Annette is always very sure of what she wants.” Case in point: the entrance hall(top photo) was decorated by Sister Parish shortly after Annette moved to Brook Hill Farm.  Theirs was a longtime allegiance formed in the days Annette’s mother used Sister for the decoration of her own homes and Annette’s subsequent country house she traded for Oscar’s.  In the photos to follow a much lighter aesthetic now fills Brook Hill Farm, showcasing the couples fine collections they have amassed over the years set within an Anglo-American sensibility. 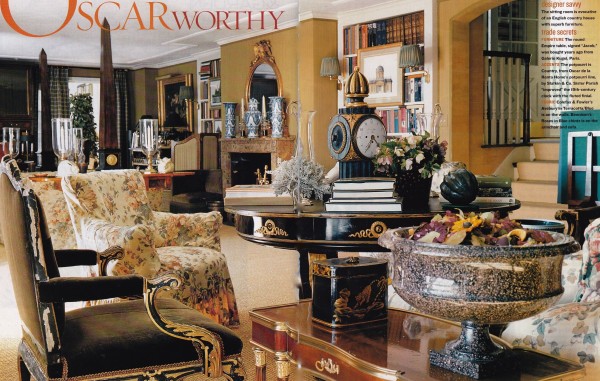 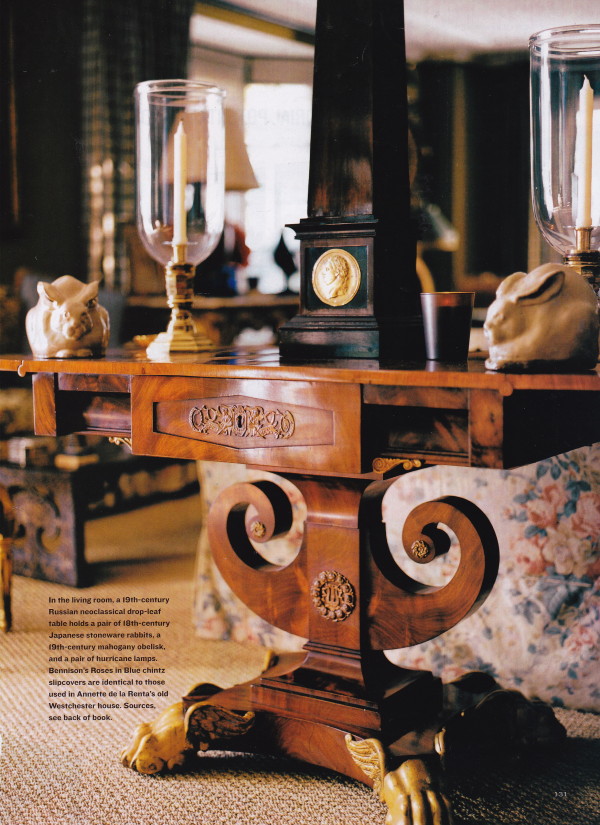 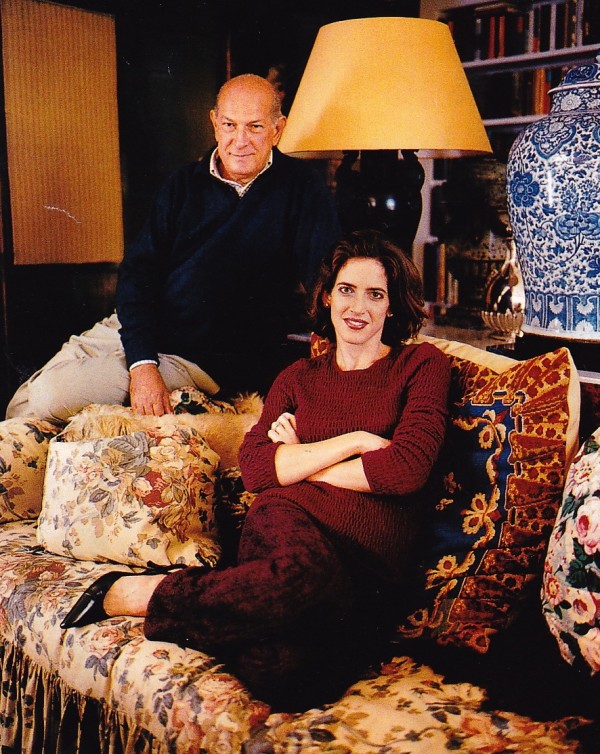 Oscar and his stepdaughter, Eliza Reed Bolen, collaborated with Slatkin & Co. on the development of their home fragrance collection, which includes candles and potpourri that evoke the memory of the de la Renta’s homes in New York, Connecticut and the Dominican Republic. 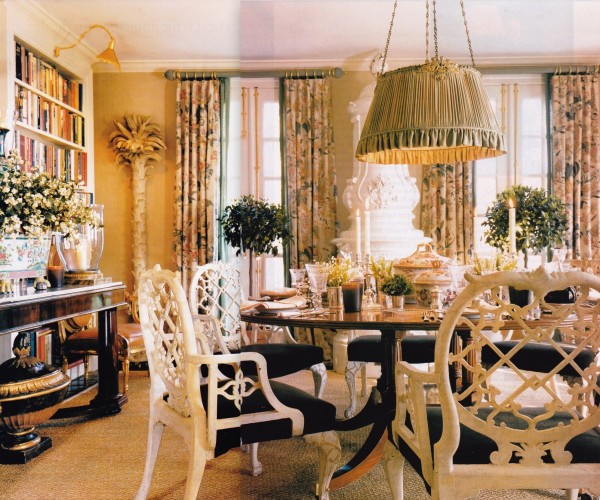 A voracious reader, Annette had bookcases added to the garden-themed dining room, where ivory-painted 18th-century English chairs surround a mahogany table. The Swedish Baroque ceramic stove and carved palm trees in the corners inject a note of whimsy. 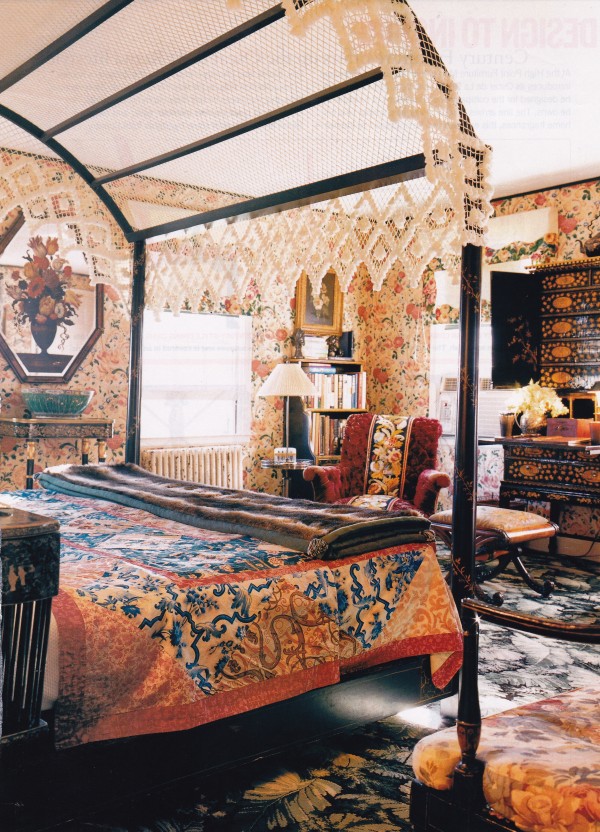 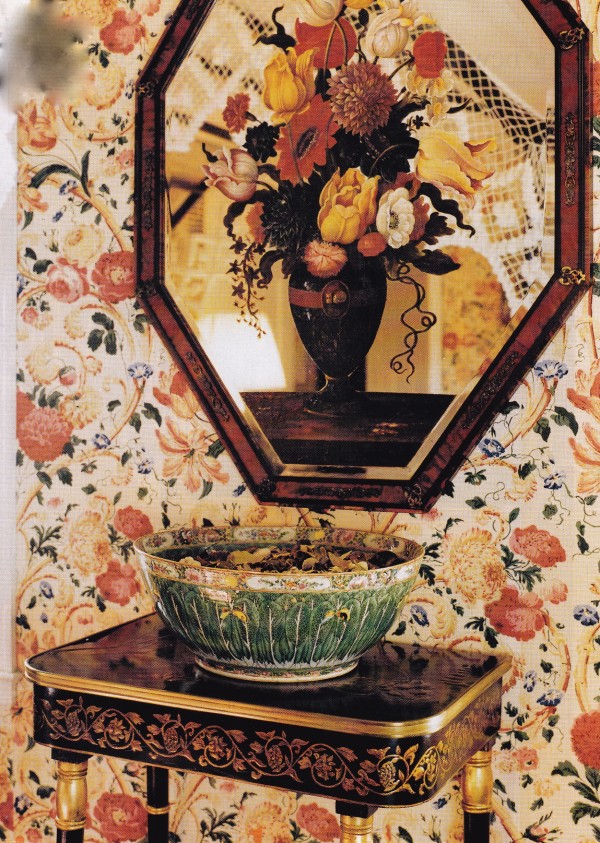 A 19th-century reverse-painted mirror repeats the flowered-wallpaper in the guest room.

To assuage Annette’s discontent over the home’s lack of architectural integrity Oscar proposed to add an ambitious and elegant bedroom wing that would provide his wife with spaces to read, write, work, dine and rest. They had long admired their friend and neighbor’s (Picasso biographer John Richardson) neoclassical pavilion commissioned from architect Ernesto Buch and, in turn, commissioned Buch to conceive a Russian-inspired pavilion set apart from the main house. 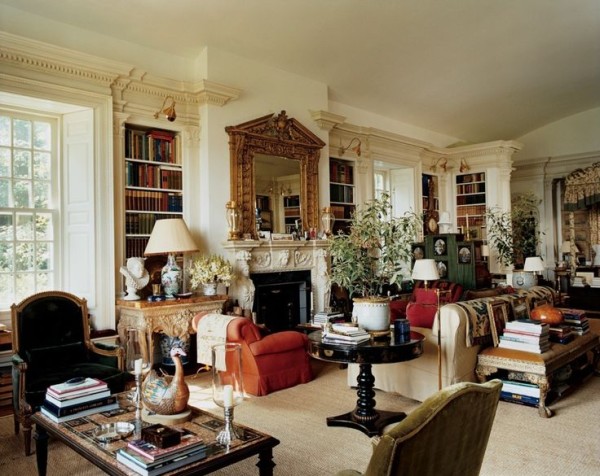 The most beautifully proportioned and appointed room in the house, Annette’s bedroom suite evokes a drawing room or library in a great 18th-century English country house, with elaborate cornices and Corinthian pilasters framing the bookcases. The mantel was modeled after one at Houghton Hall, and the console to its left is William Kent. The French chairs in the foreground come from Annette’s former country house. For all the bookcases to be found throughout the house there are still not enough to contain every book, as witnessed by the piles stacked on and below the Georgian bench behind the sofa. My kind of house! 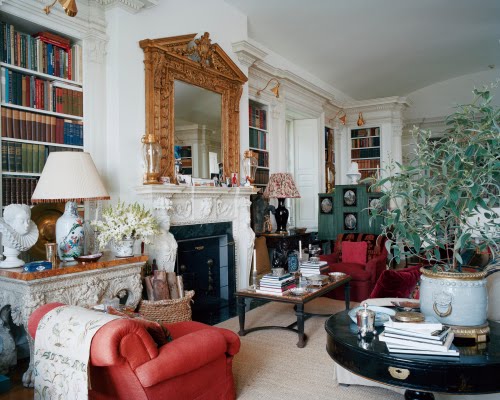 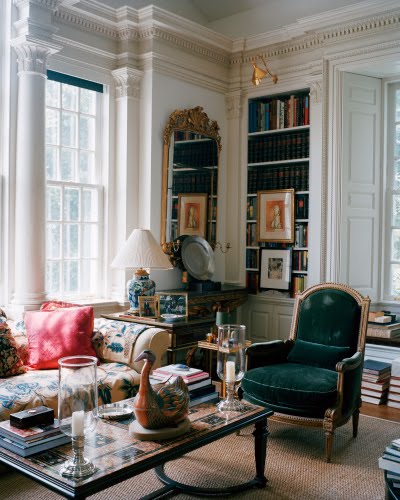 The focus of the bedroom suite is a large Palladian window that overlooks the formal gardens and rolling countryside beyond. 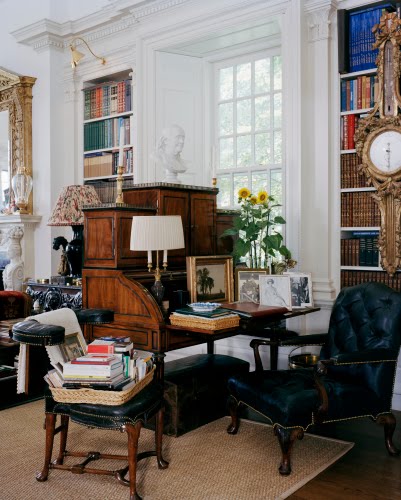 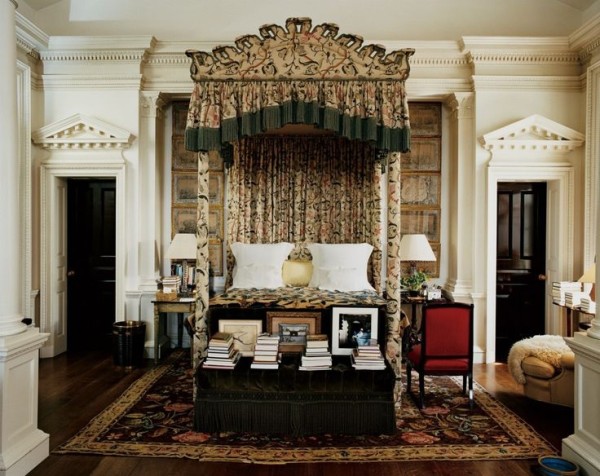 A bedsit was conceived by British decorator Lady Vivien Greenock (see Design Focus on Vivienne Greenock), featuring an early Georgian-style bed upholstered in Robert Kime’s Tree of Life linen. Set into an alcove it takes advantage of the wide vista beyond the suites windows. 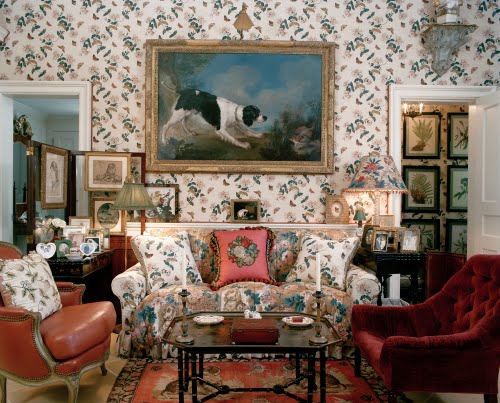 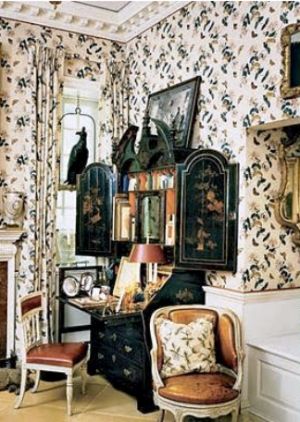 The walls of Annette’s luxuriously appointed bathroom decorated by Vivienne Greenock are covered with Colefax & Fowlers’ Honeysuckle and Butterfly linen. A Georgian chinoiserie secretary, caramel leather covered antique English and French chairs, and a fireplace make this a bathroom for living. 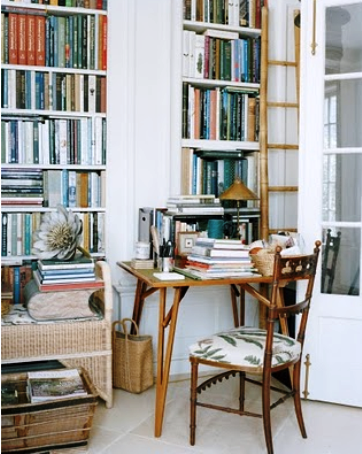 The layout of the home at the time of Françoise included two pavilions with faux trellis patterned walls flanking the main drawing room – the dining and garden rooms (see Oscar de la Renta: Connecticut 1986). With the new bedroom addition Ernesto Buch removed the sun room and installed an orangery to link the new structure with the main house. Annette had additional bookshelves installed to house her ever-growing collection of garden books. To wake up each morning and experience these rooms full of books in elegant surroundings is to live a well-lived and creative life. 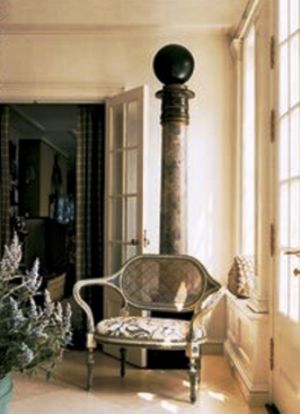 Another view of the orangery includes an 18th-century Italian chair. 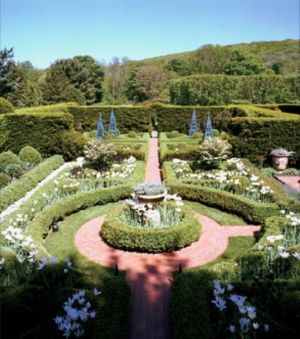 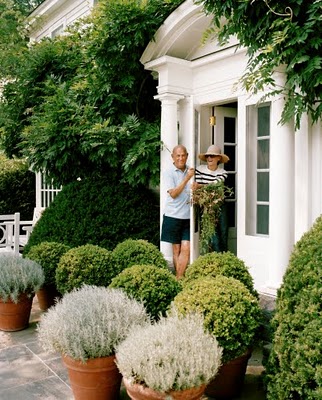 A formal garden room created in collaboration with the great Russell Page features, in the Spring, Triumphant and Queen of Night tulips.

Next stop chez de la Renta: The Manhattan apartment of Annette and Oscar.

Photography by François Halard for House & Garden, Vogue and The World of Interiors. Photo of entry hall, decorated by Parish-Hadley, by John Hall.