The Cottage at Badminton 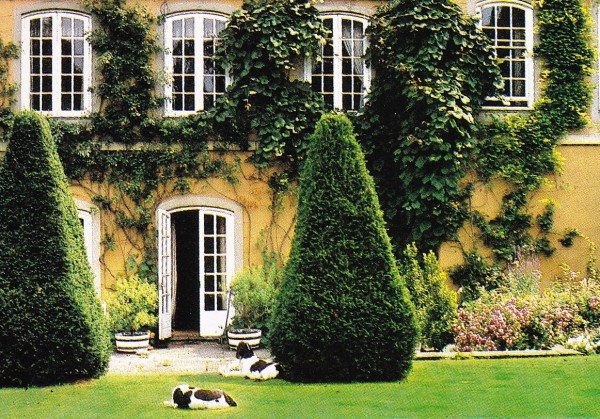 Today’s post is a continuation of the story of the Somerset’s at Badminton, their ancestral home in the countryside of Gloucestershire, England. In Badminton Revisited we dropped in on David Somerset, the Duke of Beaufort, and the current duchess, at the grand and imposing Badminton House, built in the reign of Charles II and later enlarged, in part, by William Kent seventy years later. But before David Somerset succeeded to dukedom around 1984 he and his late wife, Lady Caroline, resided at The Cottage at Badminton.

The Cottage, also known as The Dower House, was considered by many of their friends at that time the quintessential English country house, as opposed to a palace such as Badminton House. During their years spent at the Cottage Lady Caroline called on the advice of Tom Parr of Colefax and Fowler to assist with the decoration of its rooms. It has been said that Lady Caroline’s own style and taste were very much admired and imitated, and that the decoration of the Cottage was a convivial collaboration between the two.

The welcoming front hall defines English country house style, with its array of sporting gear strewn about: walking sticks, hunting caps, raincoats, cloaks and chaps. Beautiful and ample Imari bowls are set on a table to catch odds and ends, and a silver fox hints at good luck for the next hunt. 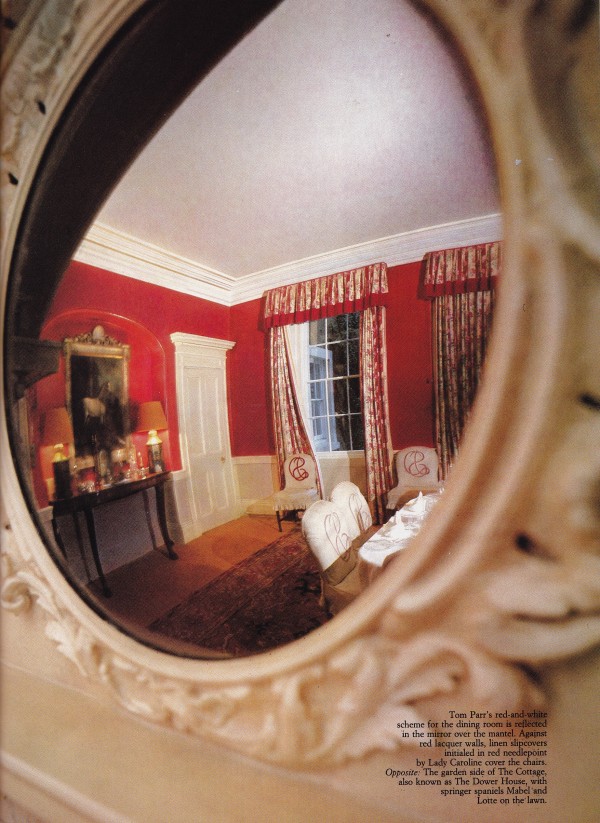 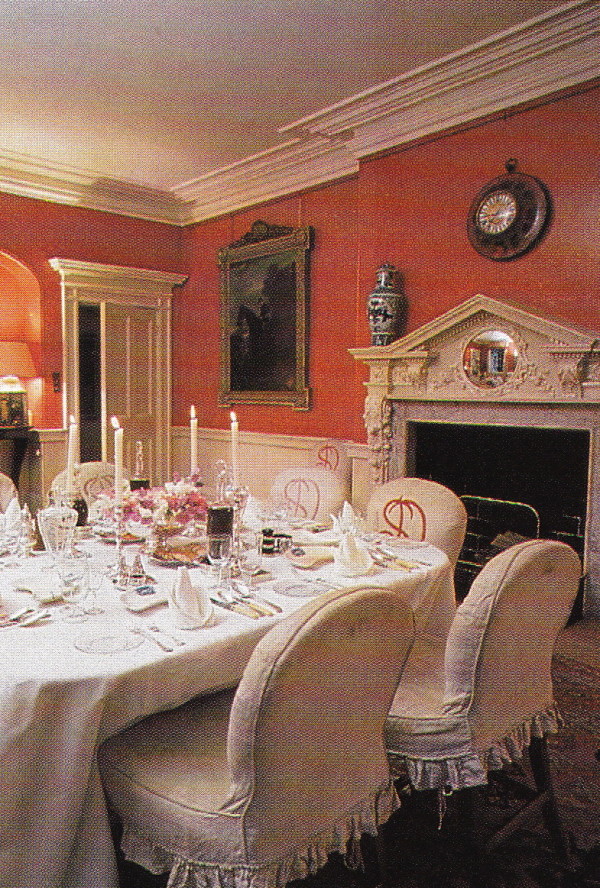 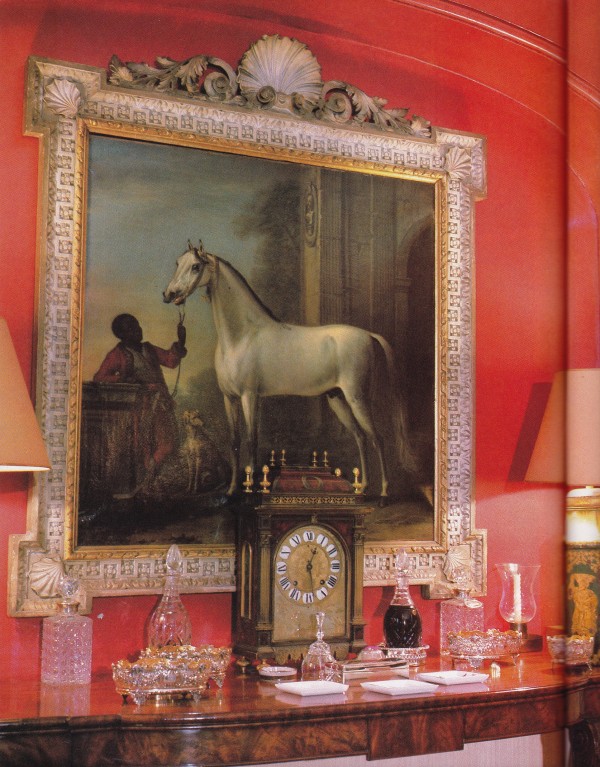 Tom Parr introduced the red-and-white scheme for the dining room (above three photos) with red lacquer walls, and linen slipcovers initialed in red needlepoint by Lady Caroline cover the chairs. In the photo above, tea caddy lamps flank John Wootton’s painting of a stallion in a frame by William Kent. 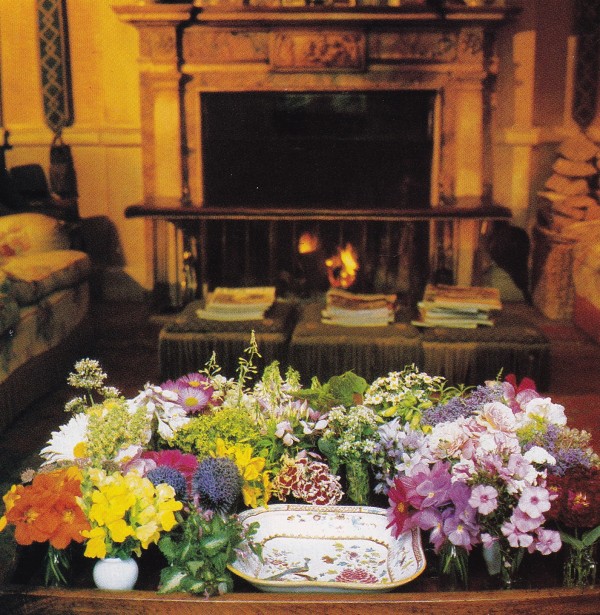 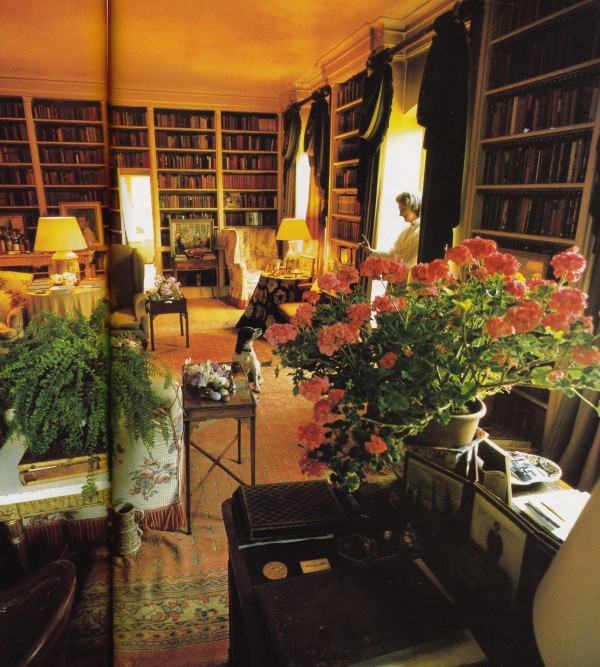 Smoke from the fire burning summer and winter had given the cozy library walls a rich parchment color. The green curtains were based on those created by Nancy Lancaster and John Fowler for Ditchley. In the window stands Lady Caroline, who is speaking to one of her spaniels. 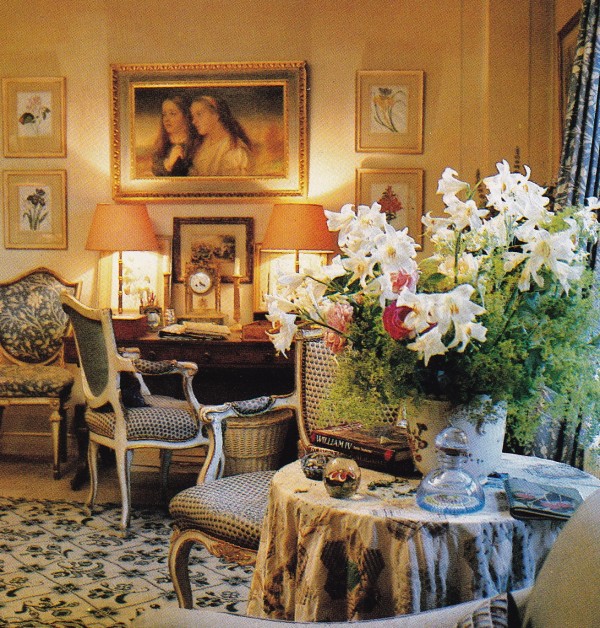 The blue-and-white sitting room has a decidedly Colefax and Fowler allure, with it prettily painted shield-back chairs, covered with a small rep French pattern, a stylized floral Portuguese rug over sisal, and botanical watercolors. 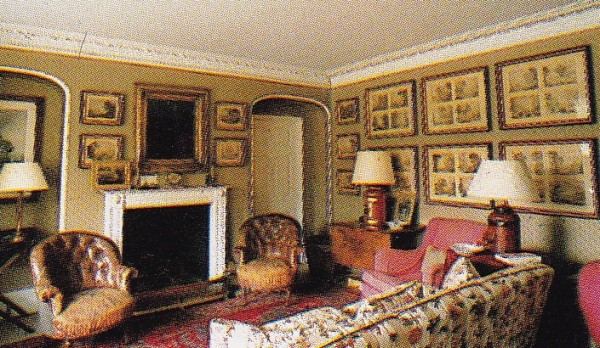 The Men’s Room is appropriately clubby and informal, its walls hung with pictures from a book illustrated by Claude Lorrain. 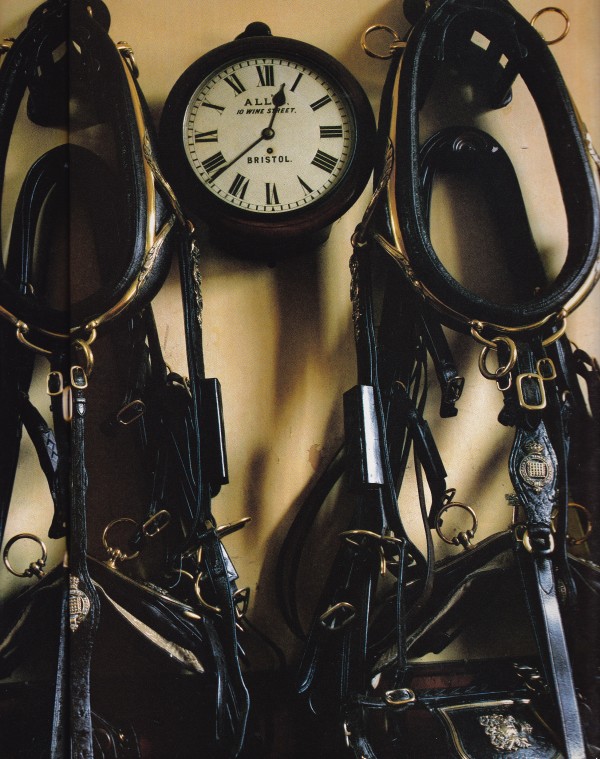 The heart of the Cottage is the stables and gardens, which together influence the atmosphere of the cottage’s interiors. Ceremonial harnesses for driving horses flank the stable clock. 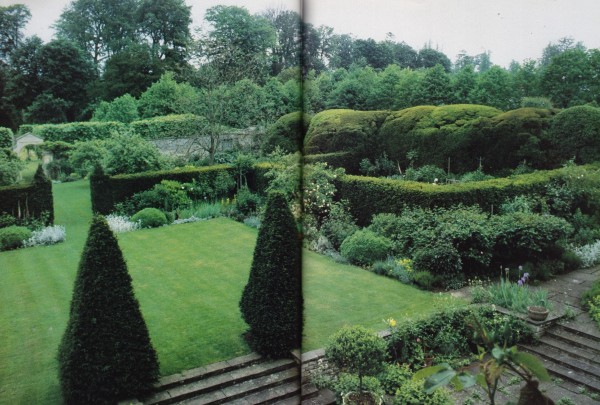 David and Caroline collaborated with the doyen of English garden designers, Russell Page, so that everything turns on to the gardens, which were designed as rooms leading into one another. 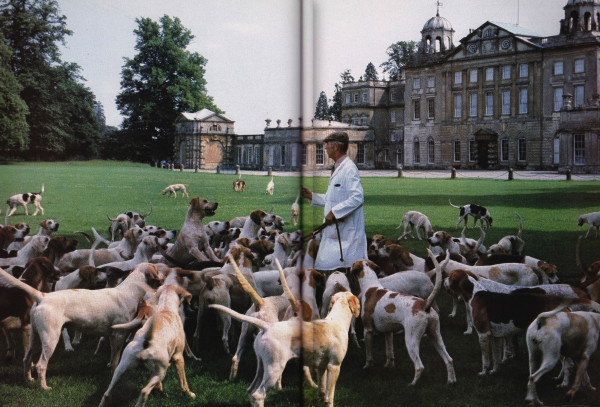 The Duke of Beaufort is considered the most distinguished expert in England on fox hunting. In a scene of the sporting life behind Badminton House huntsman Brian Gupwell stands among the hounds bred for their special pale coats.

In the final chapter on Badminton we will visit, or revisit, as the case may apply, Swangrove, the Duke of Beaufort’s hunting lodge on the Badminton estate.

This post was based on an article written by Alan Pryce-Jones for the February, 1983, issue of House & Garden, with photography by Horst. The photo of the dining room in full view is from Colefax & Fowler: The Best in English Interior Decoration.