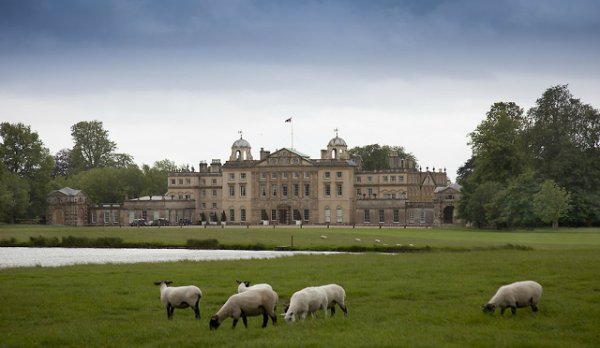 Badminton House, the Duke of Beaufort’s home in Gloucestershire, England, as photographed by James Fennell for The English Country House by James Peill.

As a follow-up to the last post, Design Focus on Vivien Greenoch, I want to share more of the grandeur that is Badminton House, and the commission that Greenoch and her senior, the legendary Tom Parr, received in 1984 when the Somersets moved from Badminton Cottage to Badminton House as David Somerset succeeded the Duke of Beaufort.

Badminton House is one of the most revered of England’s country houses, seated in the beautiful rolling hills of Gloucestershire. Through its evolution since the 17th-century it has seen England’s greatest architects create and add to its magnificent glory – Francis Smith of Warwick, James Gibbs, William Kent and Jeffry Wyatville. The Duke and late Duchess, together with Parr and Greenoch, established a continuation of quintessential English country house style, with room after room giving the impression they had always been just as they appear. 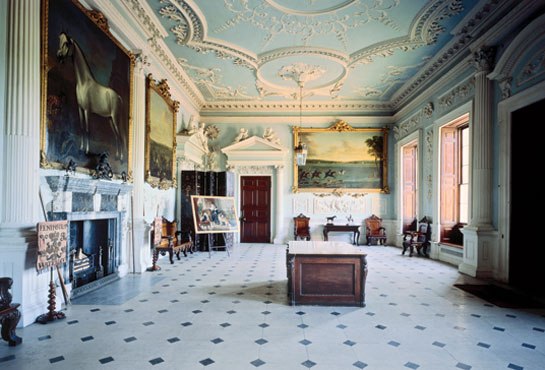 The Great Hall retains its 18th-century appearance with original elaborate plasterwork by Francis Smith,  large scale equestrian paintings by John Wootton and mahogany furniture attributed to William Kent. And if the name hasn’t given it away, it is here in the Great Hall at Badminton that the game by the same name was invented in the 19th-century. 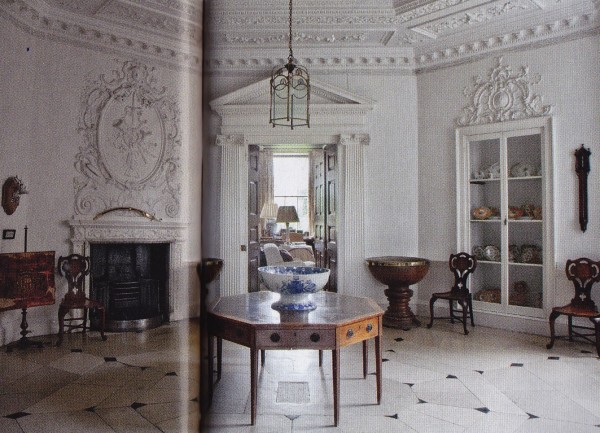 Off the Great Hall is an octagonal anteroom, the Waiting Room, which was decorated in the rococo style by Thomas Paty in 1750. The mid-eighteenth-century hall chairs bare the Somerset portcullis crest. 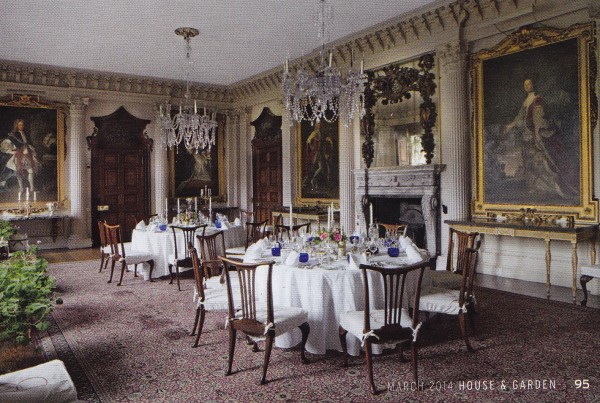 One passes from the Waiting Room through the Oak Room, a comfortable space whose walls are hung with sporting and landscape pictures, into the Great Dining Room, above. Designed by Francis Smith, Grinling Gibbons created the carvings over the chimneypiece, and the walls are hung with ducal family portraits between Corinthian pilasters. Usually the Georgian dining chairs are covered with monogrammed loose white linen covers. 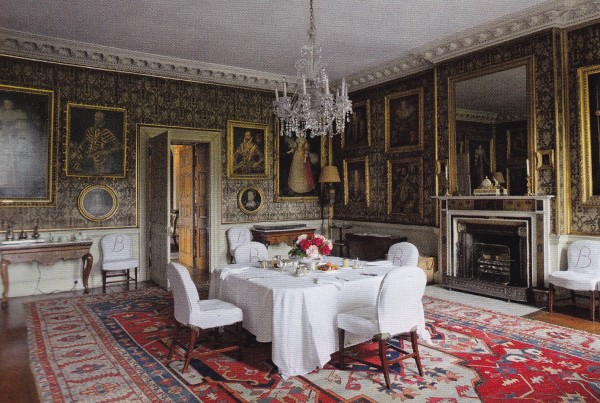 Next in the enfilade of rooms comes the Family Dining Room which combines formal and informal elements, featuring the same monogrammed loose linen covers for the chairs since the Somerset’s days at Badminton Cottage (post to follow on the cottage). Early family portraits hang over walls hung with mid-19th-century wallpaper designed by Thomas Willement. 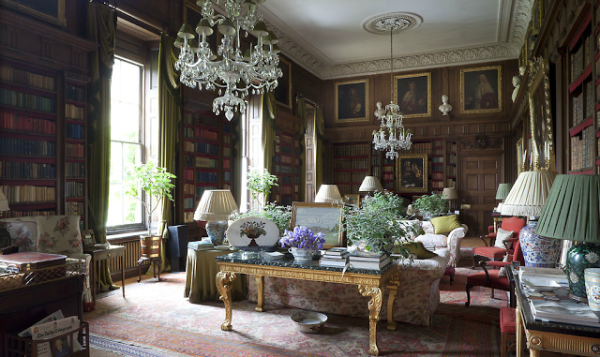 Off the Family Dining Room is the Library, one of a handful of rooms that epitomizes Colefax and Fowler’s taste for grand and humble gestures. When Tom Parr and Vivien Greenoch were asked to refresh Badminton’s interiors the intention was not to reinvent them, but to enhance them. This room was created in the early 19th-century when Wyatville moved the bookcases from the Grand Drawing Room and is used today by the family as their main sitting room. A comfortable mix of formal and informal, thirty years later the rooms appears virtually the same. Only upon close inspection with older photos can you recognize that Colefax and Fowler’s discontinued “Bailey Rose” chintz has been replaced with Bennison’s “Rope Vine”, due to years of wear. 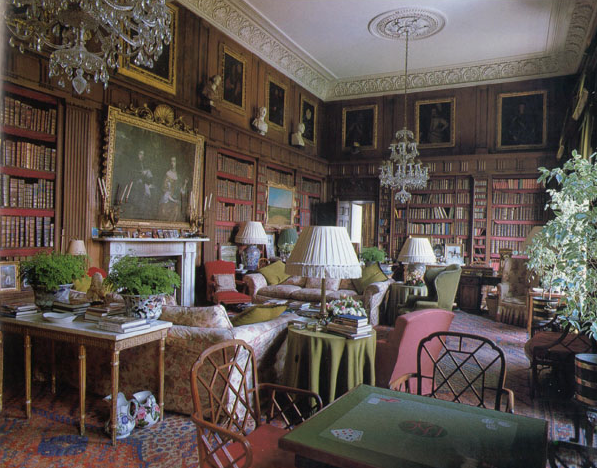 A view of the opposite end of the library reveals a painting of Badminton by Canaletto on the far end. The Chinese Chippendale chairs surrounding the games table are by John Linnell. 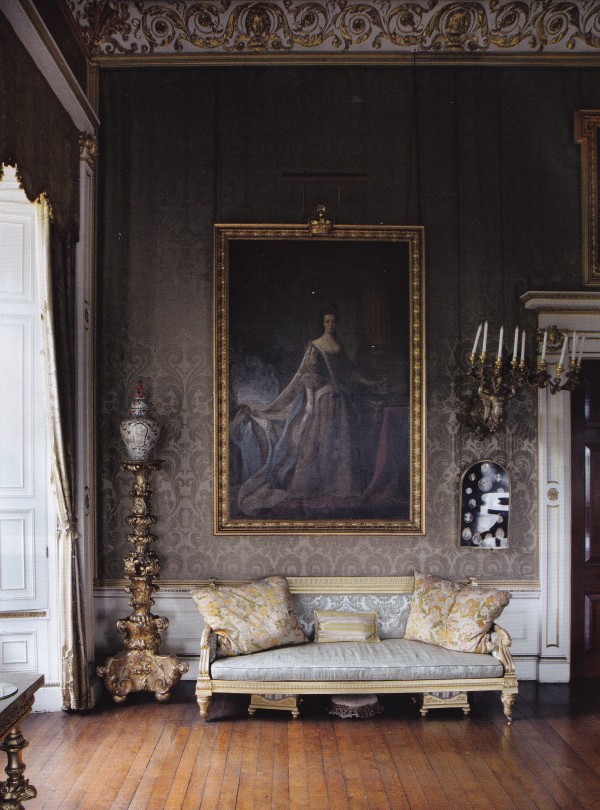 The last room at Badminton, The Great Room, is also the largest. Allan Ramsay’s state portrait of Queen Charlotte, wife of George II, hangs above a George IV giltwood sofa attributed to Morel and Seddon. 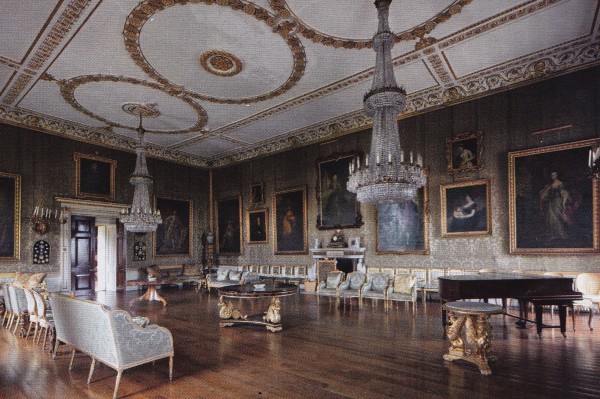 The Great Drawing room was conceived by Wyatville with a Garter-themed plasterwork ceiling and a neoclassical Italian chimneypiece designed by James Byres in 1773. 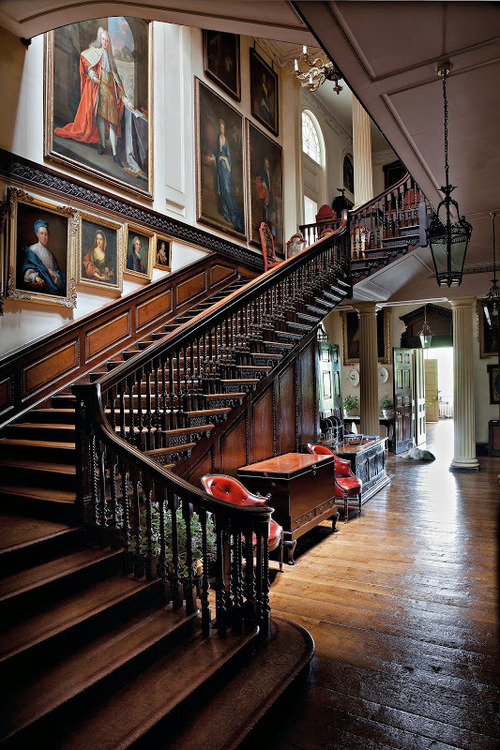 Wyatville also designed the Great Staircase at the heart of the house, which is lined with family portraits. 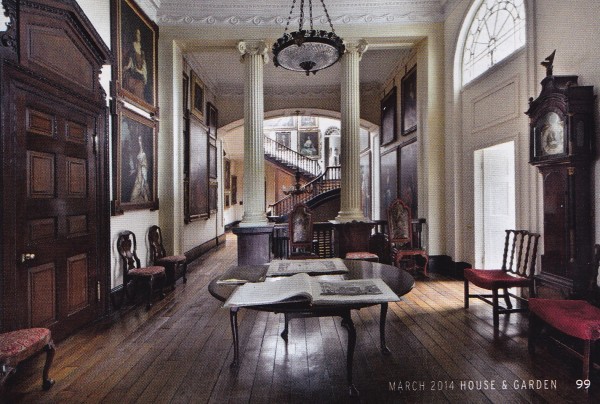 The Great Staircase is visible beyond the Ionic columns in an upstairs gallery. 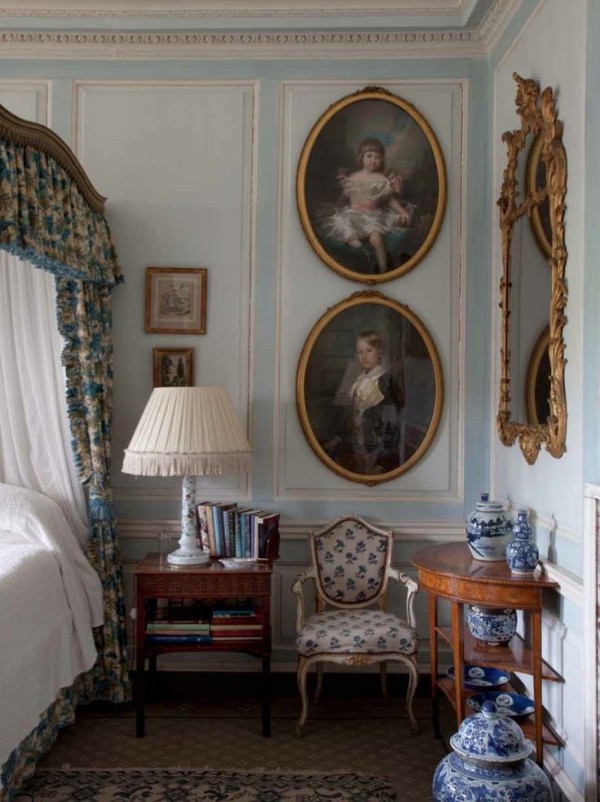 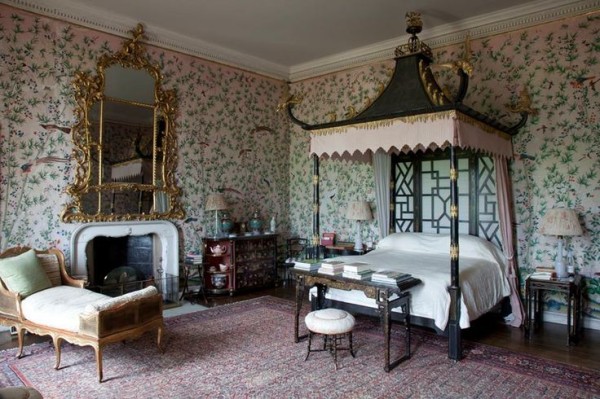 The exuberant and exotic Chinese Bedroom lined with hand-painted 18th-century Chinese export wallpaper features copies of Chinese furniture by William and John Linnell, the originals now residing at the Victoria and Albert Museum. 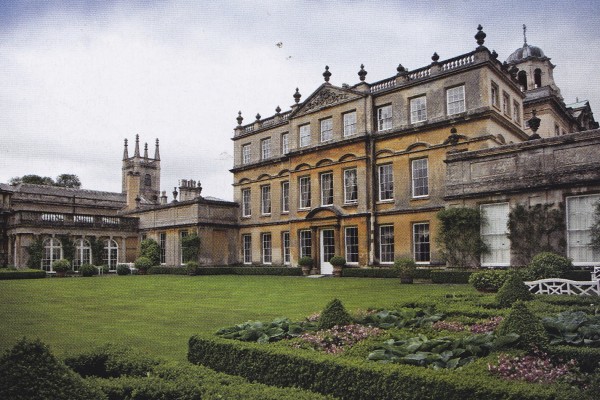 I hope you enjoyed this additional coverage of Badminton House. In the next post we will retrace the Somersets days at Badminton Cottage, decorated by Tom Parr.

Photos of Badminton House, unless otherwise stated, are by James Fennel for The English Country House by James Peill and for the March issue of British House and Garden.