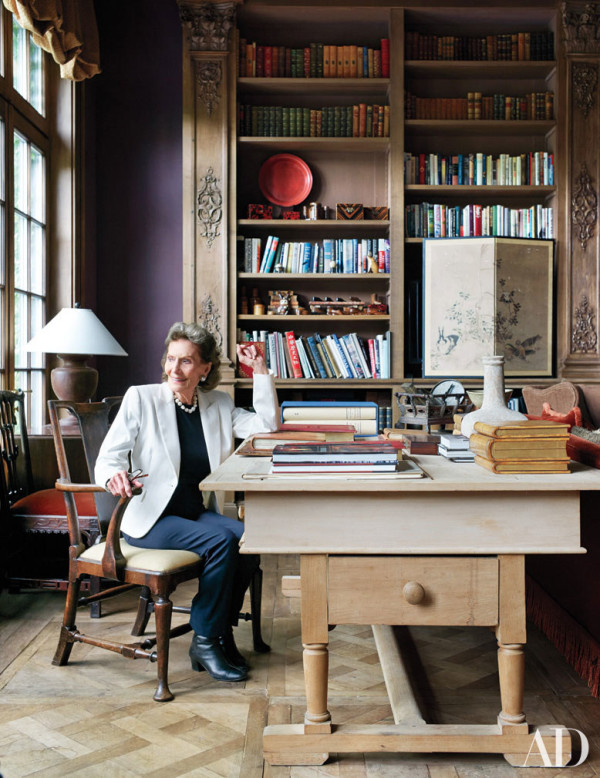 This is the story of a decades-long love affair and fascination with the Far East, and with the tradition of fine European antiques and objects. Long before the Belgian-Dutch look was en vogue in the states Betty Gertz, owner of antiques emporium East & Orient Company in Dallas, Texas, discovered its Old World allure while traveling to Europe and meeting antiquaire and decorator Axel Vervoordt at the Paris Biennale des Antiquaires, who at the time had done very little work in America. This chance meeting developed into a quick friendship that lead to a collaboration between owner and decorator on the design of the Gertz’s 1919 Georgian-style house in Dallas.

In years prior, Betty Gertz’s late husband’s petroleum business provided travel to Hawaii, Guam and Hong Kong, where the couple also maintained residences, stimulating Betty’s eye for Asian decor and culture. With her growing obsession for antiquities of the Far East, as well as her abiding love of fine European antiques and objects, the couple amassed a staggering collection that led to the opening of East & Orient Company in 1979.

With the assistance of Vervoordt, Gertz oversaw the process of selecting furniture and objects, many of which came from the designer’s 15th-century Belgian castle, Kasteel van ‘s-Gravenwezel, outside Antwerp, where Betty was a guest during European buying trips. It was on these excursions that she acquired many fine European antiques and objects for her Dallas home, many of which now fill her new home recently featured in Architectural Digest, also designed by Vervoordt.

From past to present we are witness to a singular style and clarity of vision, a passion for quality, a fascination with the rare and unusual. We are witness to a keen understanding of the relationships of form, texture, color, scale and proportion, and of Vervoordt’s masterful juxtaposition of opposites. It is a lesson in knowing oneself completely, of being immune to fleeting trends and fashions. While the prior home was decidedly more sober and compartmentalized and the present one light filled and open, there is a unifying principle that transcends time, one that can only be achieved with great generosity of spirit, passion and a discerning eye for quality, detail and, above all, atmosphere. This is The Art of the Room. 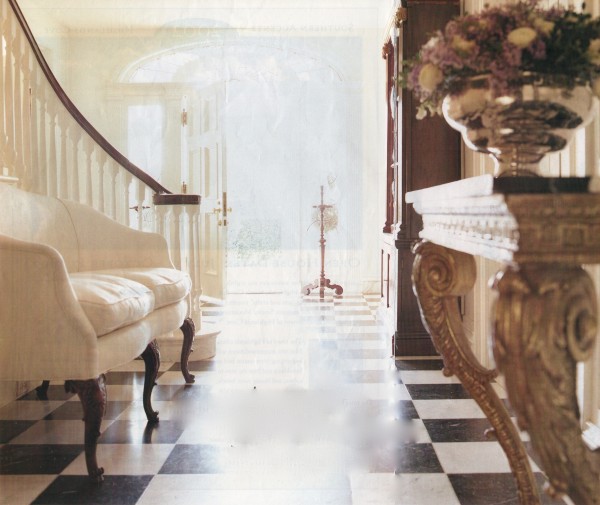 The crisp and classic entry hall of the Gertz’s previous Georgian-style residence featured a William Kent-signed George II carved giltwood console, a George II bookcase and a comfortable sofa with rounded contours to contrast the overall rigorous austerity of the space. 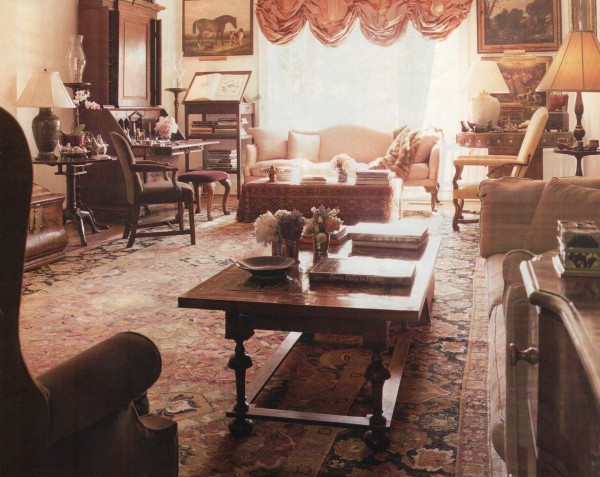 The living room represents an accumulation of objects, art, and books, and much of the furniture is 17th-and-18th-century English, with many pieces attributed to the workrooms of Thomas Chippendale. One of the finest pieces in the room is an 18th-century carved wooden games table by Daniel Marot I, a Franco-Dutch designer who worked for the princes of Orange and the English royal family. Within an envelope of creamy white the subdued color scheme draws from the 17th-century Persian Isfahan rug with shades of burnished terracotta, repeated on the taffeta window treatments. 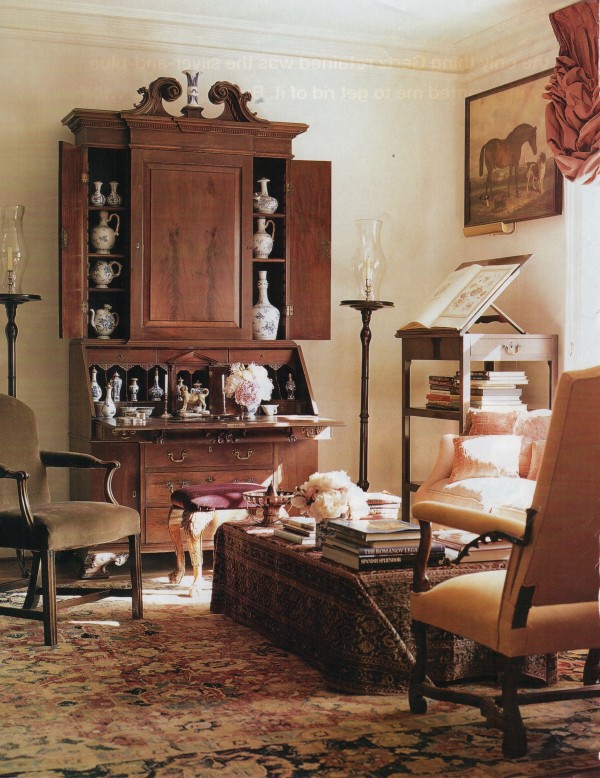 In one corner of the living room a writing desk attributed to Thomas Chippendale displays a collection of Ming porcelain, and an 18th-century silk fabric covering a books table compliments the Persian rug. 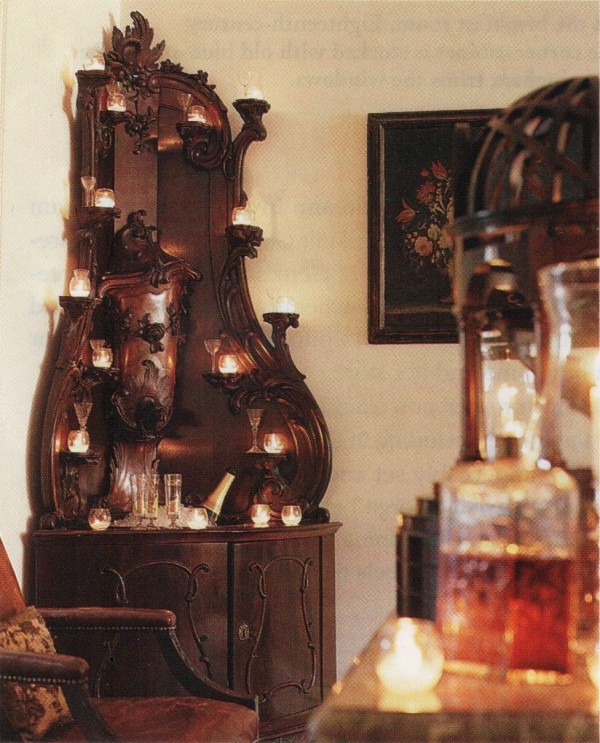 In another corner of the living room a rare Dutch rococo corner cabinet was used as a champagne bar. Today it can be found in Betty’s bathroom (see below). 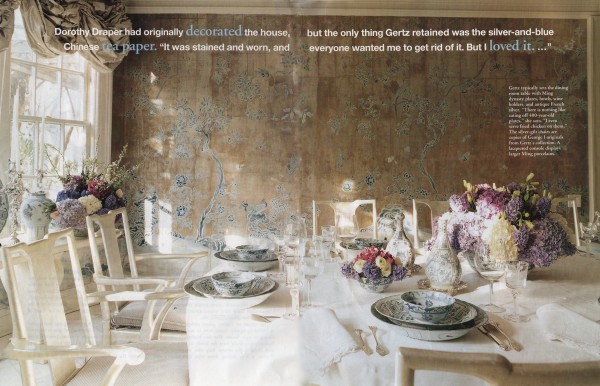 The Georgian-style home had many years prior been decorated by Dorothy Draper. The stained and worn silver-and-blue Chinese tea paper covering the walls of the dining room was the only design element Gertz retained, against the advice of everyone else, except perhaps Vervoordt, whom extols the virtues of patina. As seen elsewhere in the house, four-hundred-year-old Ming dynasty porcelain from the legendary Hatcher trove is not only displayed, but used. Silver gilt chairs are copies of George I originals from  Gertz’s collection. With its romantic silvery light, what a magical place to dine, day or night! 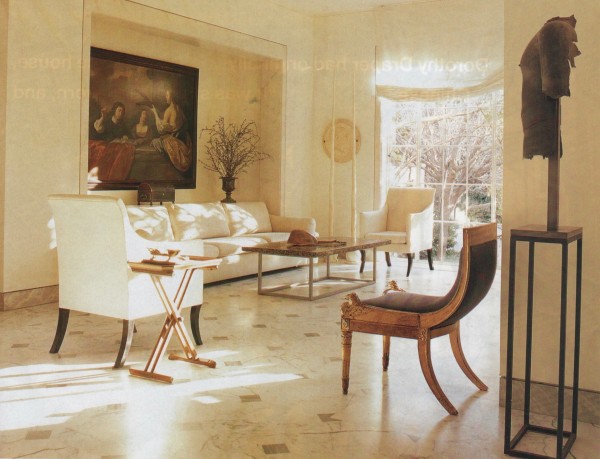 The solarium, or “White Room”, as it was referred to, is one example of Vervoordt’s achievement in the juxtaposition of opposites. Just off the living room, with its rarefied collections and soberly elegant ambiance, the new solarium designed by Vervoordt was a retreat for the senses, a spare and rigorous contemporary setting. There are so many lessons to be learned from this room – a room of contrasts of form, texture, hue, shade style and period, all seamlessly married into one cohesive decorative resolution.  The creamy white of the walls, marble floors, upholstery and window treatment creates a soothing envelope for a curated and restrained selection of antiques, art and objects. The rich palette of Concert, painted by Jan van Nijlert, above the sofa, stands in counterpoint to a rare Empire giltwood gondola chair from the Chimay collection, floating as a work of art before a 14th-century Thai bronze, each extending the rich tones from the painting across the room. Though not discernible from this photo, the modern base of the coffee table supports an Italian pietra dura marble top featuring a design of interlocking circles in the same rich hues. Another nod to the Classical past includes a Renaissance terracotta tondo framing one side of the floor-to-ceiling window overlooking a park. 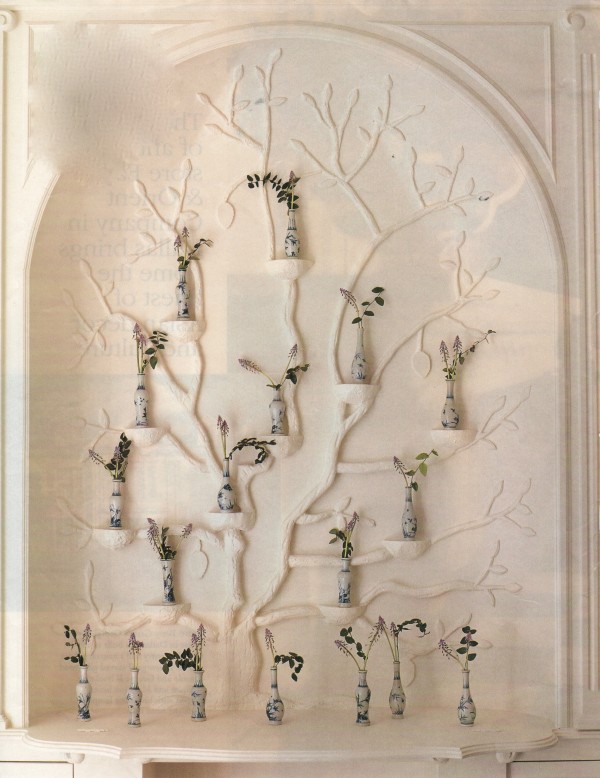 I wish I could uncover more photos of the solarium, my favorite of these rooms. If you happen to possess any, please, share them – I will include them here in an update. Somewhere in the solarium is this plaster niche  displaying more of the Hatcher trove, which was discovered on a sunken ship in the South China Sea and auctioned at Christie’s in 1984. 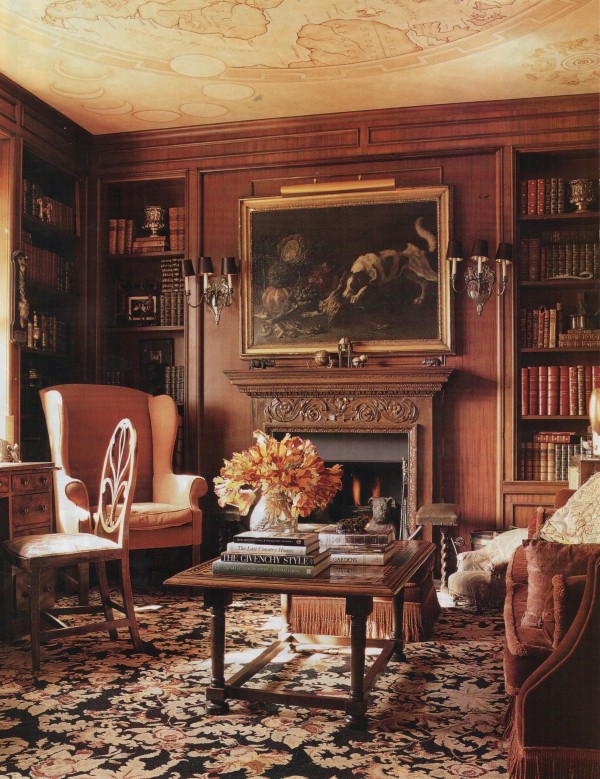 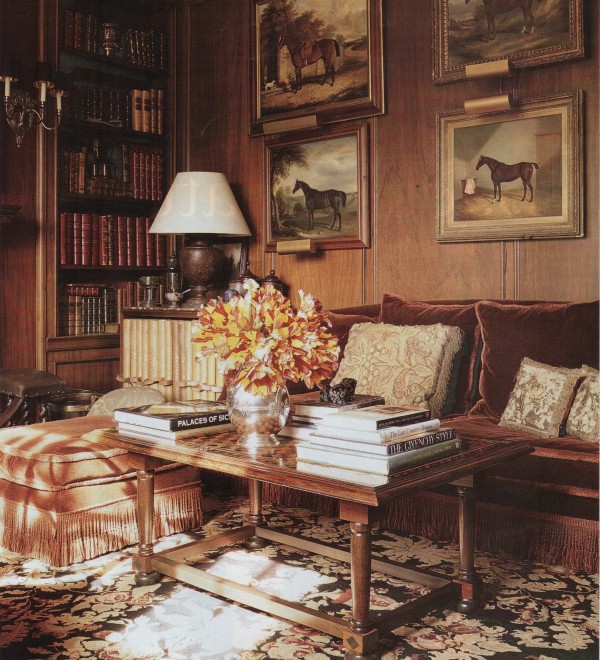 The clubby appeal of the library, hung with English horse paintings, is imbued with a rich palette, from the burnished oak of the paneling to the cinnabar of the mohair sofa and terracotta velvet of the wingchair, to the chiaroscuro of the still life painting above the fireplace and the richly patterned French needlepoint rug. The ceiling is painted with a sepia-toned map, which include stars indicating places where the Gertzes have lived. 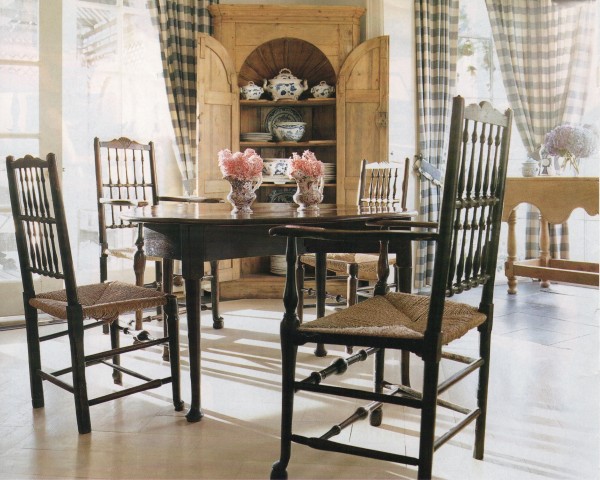 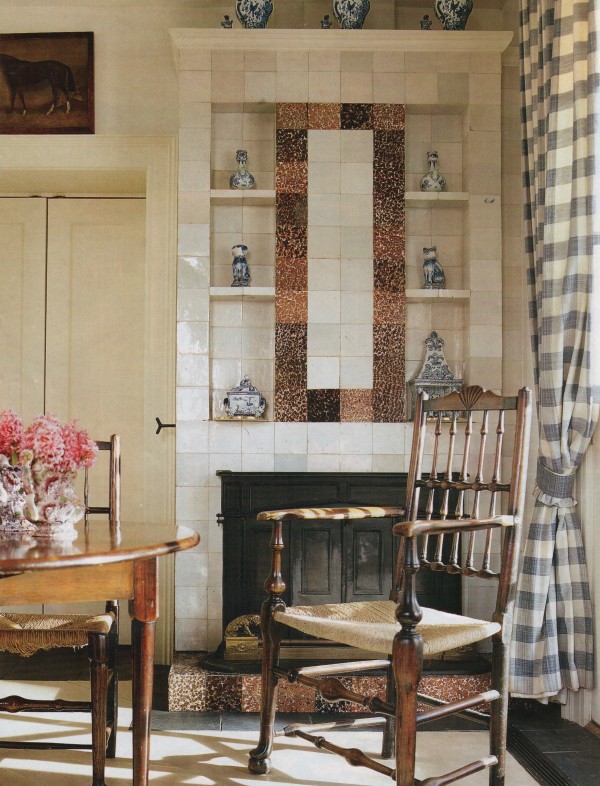 In addition to the solarium, Vervoordt installed the kitchen in his now imitable style, featuring a large mantelpiece surrounding an iron stove faced in plain Delft tiles with display niches. Eighteenth-century rush-seated Georgian chairs surround a breakfast table, and a pine cabinet is stocked with blue-and-white Spode porcelain.

Betty Gertz’s new Dallas home is one part contemporary villa, another Belgian manor. Calling once again on her friend Axel Vervoordt, the minute he laid his eyes upon her new home he made it clear he didn’t like it one bit. The two-story house is narrow and set deep into the lot, with little room for aesthetic improvement to its exterior, short of tearing it down.  Vervoordt proposed to surround the property with high garden walls to create anticipation upon arrival and a sense of mystery within. One now enters through a shaded garden leading to what appears to be the front door but which is, in reality, a door opening onto a small courtyard, which then opens onto yet another, larger, courtyard, culminating with the home’s proper entrance. A complete renovation of the house followed, resulting in higher ceilings, new finishes and materials, more light … and an abundance of atmosphere evoking the past and present. 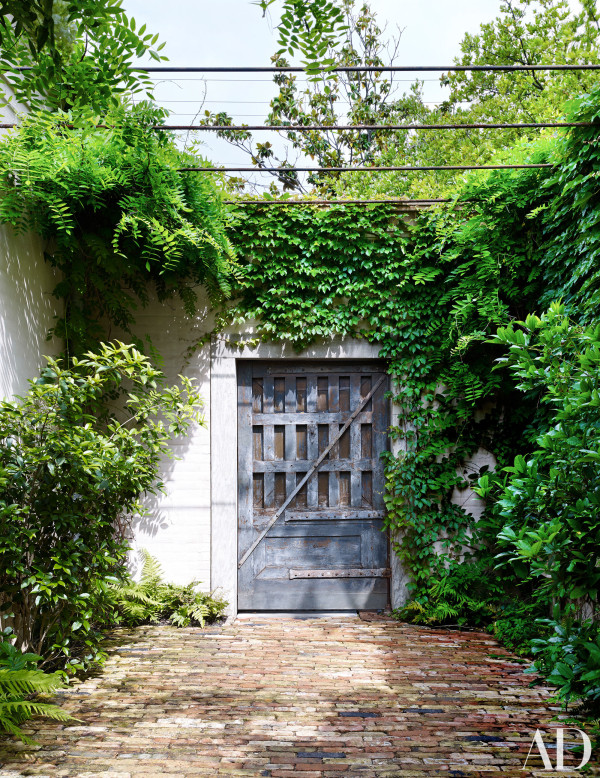 A Louis XIV door marks the entrance to the property’s outer courtyard. 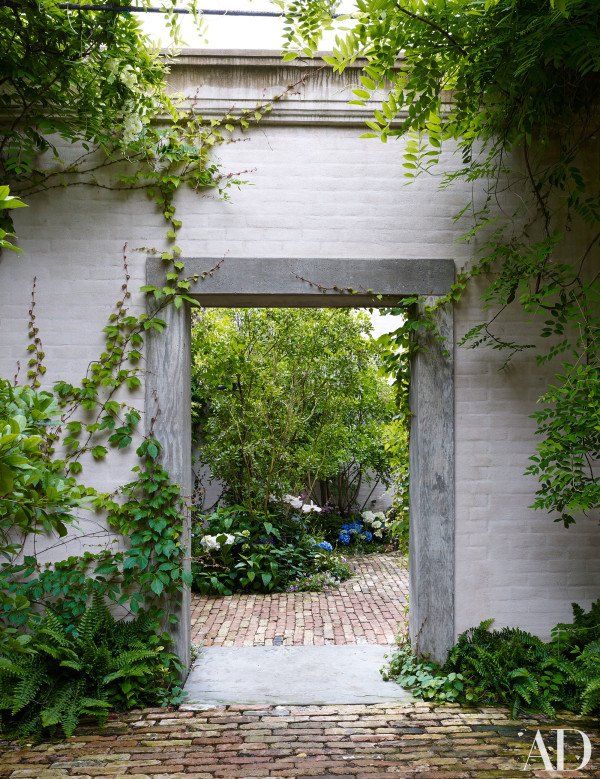 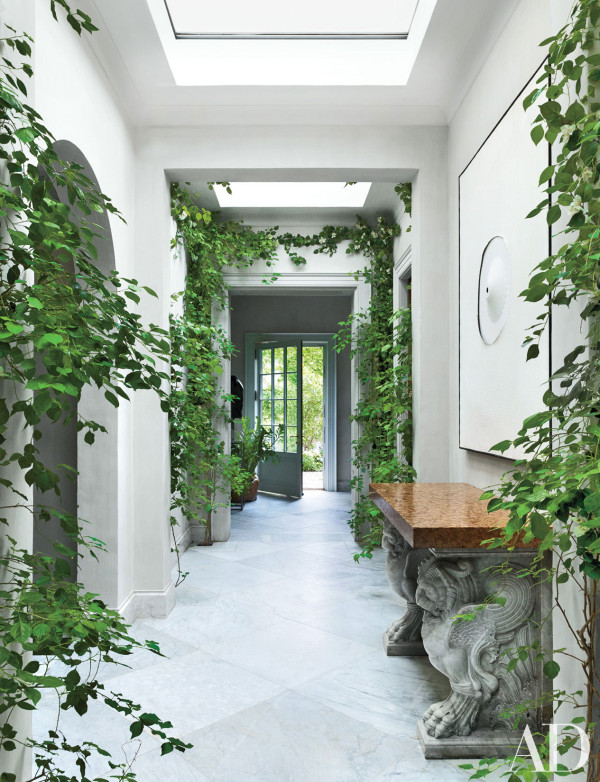 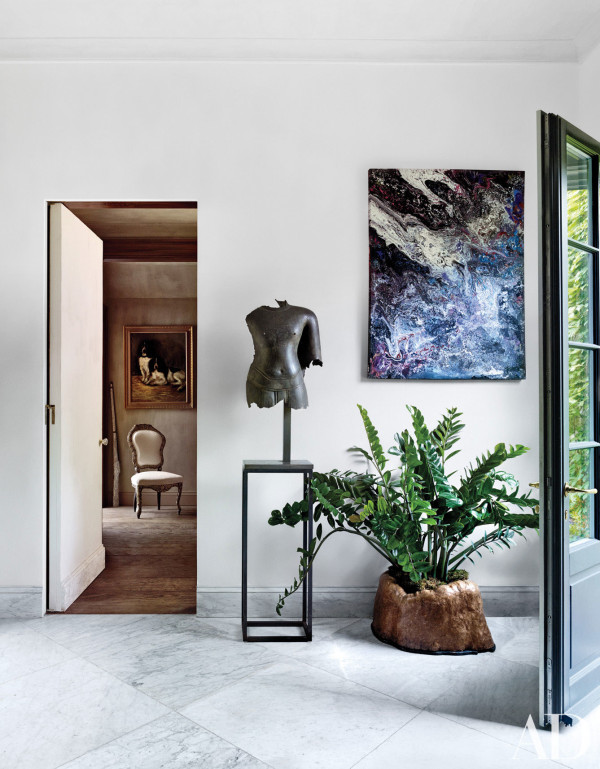 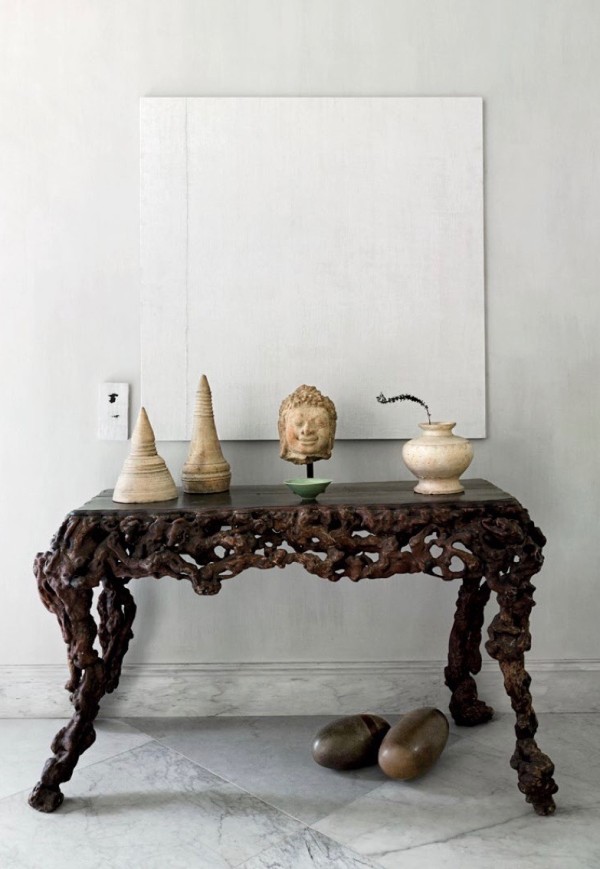 The entrance hall merges garden and interior into one light-filled gallery highlighting exceptional items of furniture and art selected and arranged with the eye of an artist and curator. To the renovated space Vervoordt installed old Carrara-marble slabs and trained bougainvillea onto lime-painted plaster walls applied by Flemish artisans. In the first photo a canvas by Japanese artist Norio Imai crowns an 18th-century marble console. In the next photo, just inside the front door, a Khmer bronze torso, an abstract painting and a 19th-century hibachi create a three-point composition. The last photo features a root table beneath a minimalist artwork by Axel Vervoordt. 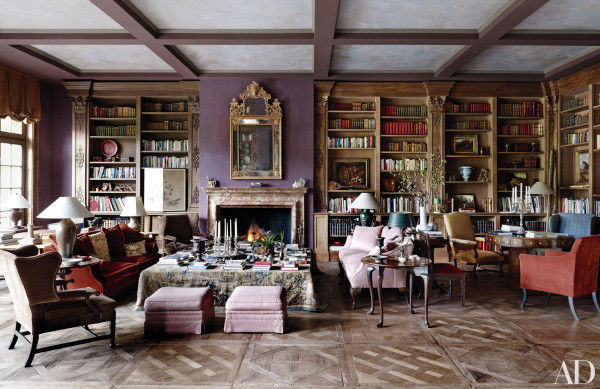 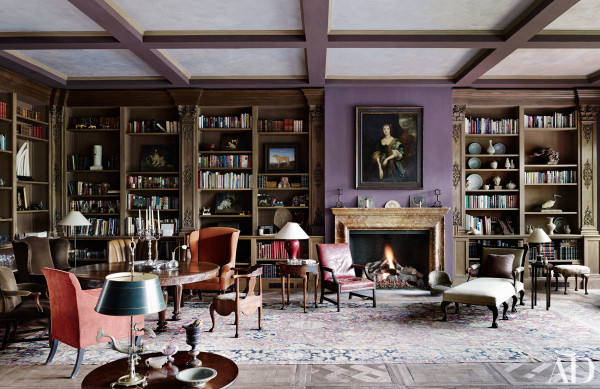 The spacious library – divided into two sides, each with a fireplace – is the heart of the house, a virtual cabinet of curiosities designed for reading, relaxing and dining. To create a copacetic background for Gertz’s beloved collection of fine English antiques and objects from the Far East Vervoordt devised bookshelves built around c1700 French pilasters and installed timeworn wood parquet set into patterns for the floors. As your eyes scan the room you will identify many of the furnishings and objects used to furnish her previous home – the cinnabar mohair covered sofa from the library facing an English one from the living room; in one corner a chamois hued English leather chair pulled up to the round games table designed by Daniel Marot I from the living room; a 17th-century English wing chair from the library, its velvet wearing thin on the arms; as well as various lamps, objects and art. Gertz loved  the silk covered books table from her previous home’s living room so much it was repeated here, now covered with a Flemish tapestry. And in a daring stoke, the room’s walls are not neutral but eggplant, to which soft pink silk was selected to recover the English sofa and a pair of ottomans. Like the finest homes of Europe, the worn fabrics and rugs mingling with centuries old antiques and art imbues the home with the patina of age, as though it had existed here as such for generations. 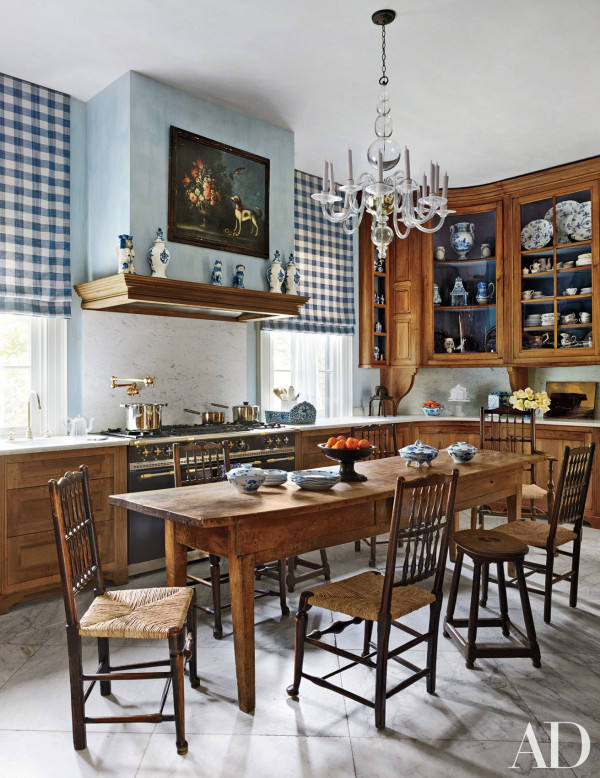 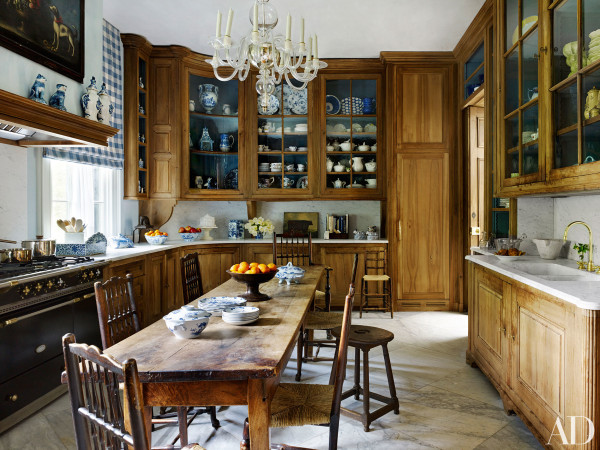 Vervoordt recreated the Old World atmosphere inherent in Gertz’s prior kitchen utilizing cabinetry from an 18th-century Bordeaux apothecary and by installing walnut cabinetry that integrates antique French elements. The same blue-and-white Belgian gingham as used before was hung at the windows. 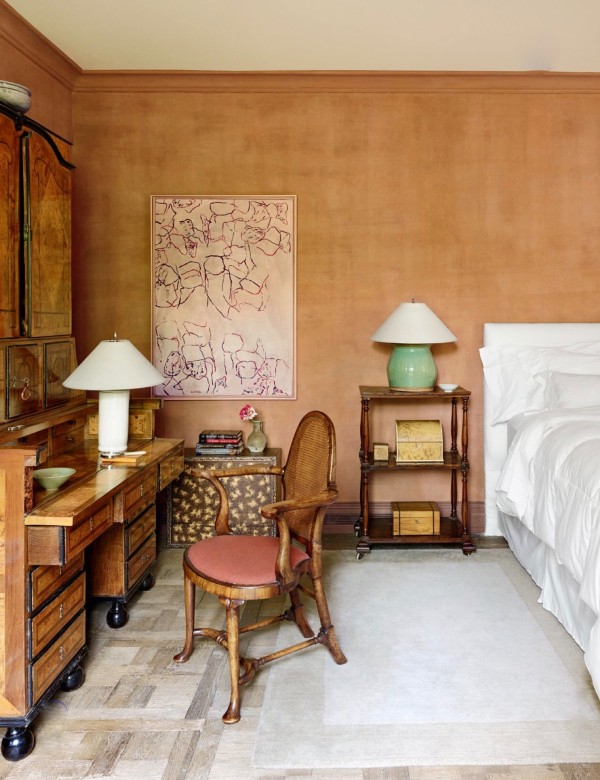 Walls limed the color of burnished apricot form a complimentary backdrop to the honeyed wood tones of an antique Belgian secretary bookcase in the master bedroom. The painting is by Ida Barbarigo. 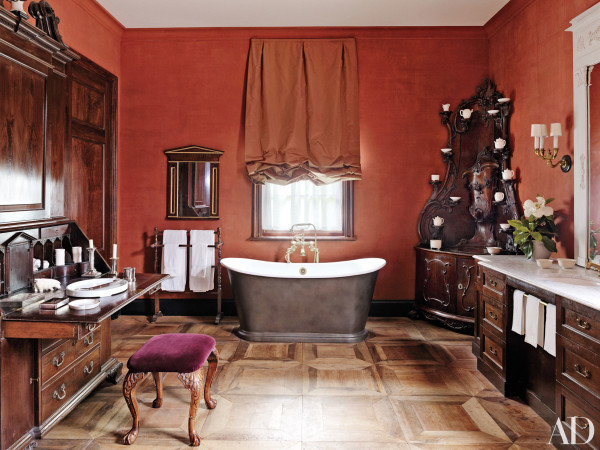 The richly appointed master bath includes several of Betty Gertz’s most prized possessions, all from her previous home: a Chippendale secretary bookcase and an exuberant rococo corner cabinet laden with blanc de Chine, which Southern Accents attributed as Dutch but which Architectural Digest suggests is Venetian. 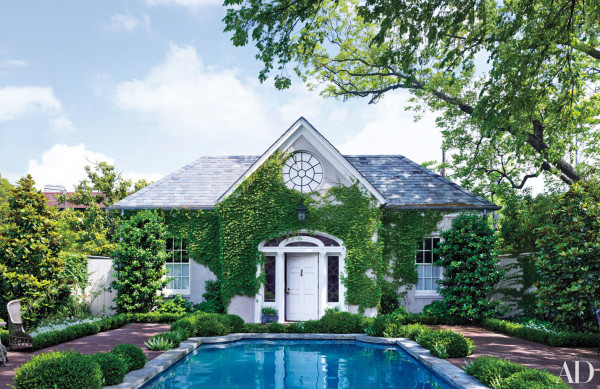 The design of the poolhouse was intended as a happy memory, incorporating a Colonial-style entrance salvaged from Gertz’s former home. 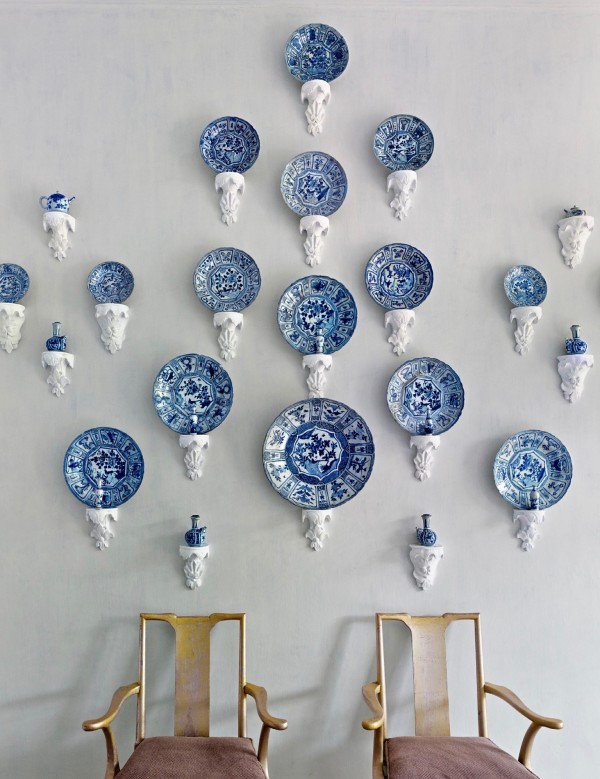 In the poolhouse, antique Chinese porcelain from one of the famous Hatcher cargoes perches on plaster brackets designed by Axel Vervoordt.