The Enchanting World of Las Tejas 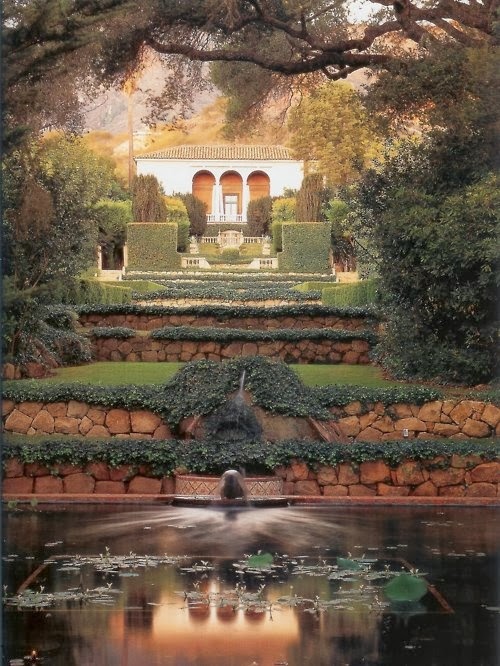 Greetings, and Happy New Year to each of you! I have been away from writing for The Art of the Room for some time, I realize. And I apologize for not providing explanation in my last post. But, you see, at the time I had no real inkling I would step away for as long as I have. Professional projects and personal obligations have taken precedence, and as the holiday season fast approached I found myself running to catch up. So, in the spirit of a new year and a fresh start,  I share with you a magical property that has long captured my imagination since I first discovered its secret charms, Las Tejas in Montecito, California.

Las Tejas is likely familiar to many of you for its gardens and interiors designed by John Saladino. But after searching the estate on the Internet, Pinterest, Instagram and Tumblr I discovered very little has been posted or written about it. I would be disappointed to learn I am one of few who find the enigmatic qualities of Las Tejas sublime. It isn’t just the house, or the setting, or the interiors, or the gardens – it’s the ensemble, the whole, which captivates our senses. There is a poetry to living expressed here that is undeniably seductive, a dream of the past realized in the present.

My husband, Michael, and I recently returned from holiday in Montecito. In another life (not so many years ago!) I lived in southern California, where I was enrolled in UCLA’s Interior Design program. While working as an outside sales representative for Jack Lenor Larsen I became acquainted with Montecito, calling on interior designers and architects such as Mark Weaver and Jack Warner. Instead of stopping for lunch I would drive up Olive Mill Road into the hills below the Santa Ynez mountains and get lost in their amazing rugged beauty, dotted with walled estates on expansive properties inspired by the Grand Tour, in particular the romantic revival styles of Spain and Italy. Growing up in northern California I was not immune to the Golden State’s love affair with Spanish and Mediterranean-style architecture. But this was on a wholly different level than anything I had ever seen. And so, while driving along Olive Mill Road this past December we passed the turn for Las Tejas Road. My heart leaped! I knew the estate for which the road is named well from its publication in a 1990 issue of House & Garden and John Saladino’s monograph Style By Saladino. There is no gate, only a long, narrow road leading to the villa’s actual address on Pichaco Lane, where a formal gated entry guards the property. There are many narrow and private roads like this in Montecito, lined with towering mature eucalyptus and framed by private walls, luring us into their promise of a hidden paradise. 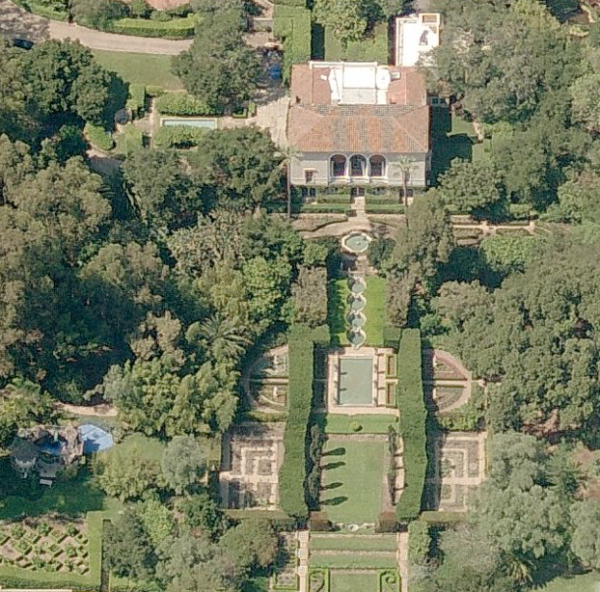 Las Tejas began as a simple adobe with a central courtyard when built in 1898 by William Alston Haynes Jr. for his bride, covering its roof with 8,500 tiles that he obtained in return for providing shingles to Santa Barbara residents who wanted to replace their sagging roofs – ergo Las Tejas, which translates to “The Shingles” but what many refer to it as “The Tiles”. Unfortunately, Haynes couldn’t afford to remain there and was forced to lease it out for two decades to vacationing easterners. In 1917 Helen Seymour Starford Thorne, a highly accomplished landscape designer, and her husband, Oakleigh, purchased Las Tejas as a winter home from their base in Millbrook, New York. Inspired by their travels to Italy, and Giacomo da Vignola’s 16th-century Villa Farnese outside Rome in particular, they hired architect Francis W. Wilson to restyle it into a reinterpretation of a Renaissance villa for California living in the 20th-century. To the basic footprint of the existing house Wilson added a second floor, a new wing and the three arches over the veranda, altering its appearance significantly. In 1926 George Washington Smith was brought in to make further changes, including a new design for the front entrance, the installation of a retractable glass roof over the inner courtyard, and the refashioning of an outdoor patio into an Italian-style patio. Helen Thorne took immediately to the grounds, basing their design after the many gardens she had visited and studied in Italy, in particular those at Villa Farnese, creating a magical paradise with cascading gardens and water features. But, sadly, they felt they must leave their piece of Xanadu, shaken by the attacks on Pearl Harbor in December, 1941, and sold the property for a mere $40,000 to Caroline and Frederick Leadbetter. 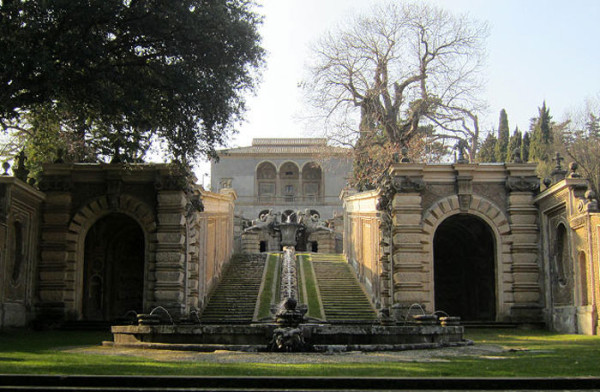 The casino at Villa Farnese outside Rome designed by Giacomo da Vignola in 1556 inspired the architectural style and layout of Las Tejas.

Over the ensuing years under the Leadbetter’s stewardship Las Tejas declined, ending with Caroline’s death at the age of 102 in 1972. Purchased for $575,00 by its new owners, Teri and Manuel Rojas updated the villas plumbing and wiring, made renovations to much of the house and cleared the gardens of overgrowth, later selling it in 1988 for $6 million to preservationists Stephanie and Peter Sperling,.  With a vision to restore Las Tejas to its former glory, who better to call on than John Saladino to meet the task? Not only is the designer well-versed in the language of classical architecture, having studied in Rome, and for fashioning an interior design business on its ethos, he also had an intimate relationship with the house having years earlier lost Las Tejas in a bidding war. And so, with enthusiasm and funds to spare, the Sperling’s and Saladino embarked upon a major renovation of house and gardens. The fourteen-acre estate boasts a twenty-room mansion, a four bedroom/four bath guesthouse, swimming pool and cabana with spa, tennis court, the original chauffeur’s cottage cum artist’s studio, and terraced gardens. 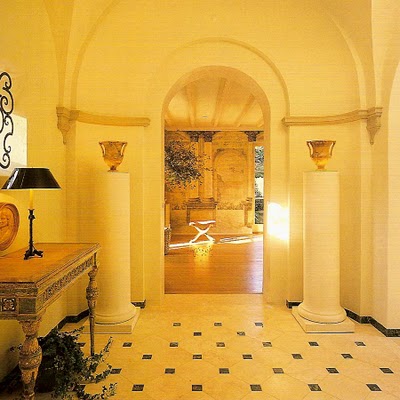 One end of the gallery-like entry hall introduces Saladino’s restrained vision with architectural interest as passage from one room to another. The pair of pedestals supporting  alabaster urns, the 18th-century console, and Régence-style stool beyond in the dining room came from Quatrain in Los Angeles. 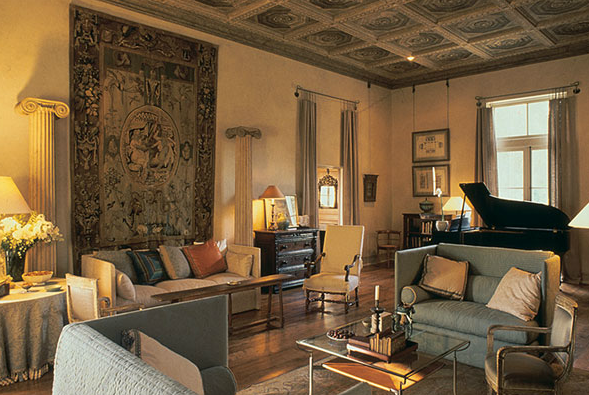 In order to control the overwhelming scale of the drawing room Saladino referenced the classicists by introducing a large scale trompe l’oeil coffered ceiling painted by Christian Granvelle and a de Medici tapestry hung high, flanked by a pair of columns to represent the residential scale over a high-back sofa, which represents human scale. This formula of three scales, in effect, allows our eye to experience a sense of proportion and harmony as it travels up and down throughout the room. The floating high-back facing sofas of Saladino’s design further establishes a distinct zone and carries the sight line from the top of the other sofa to the center of the room. A secondary zone at one end of the room is designated for music, and at the other is an area dedicated to books. Of course, all of this, too, adds a great sense of theatricality and opulence, combining antiques with his own comfortable contemporary designs based on classic models. 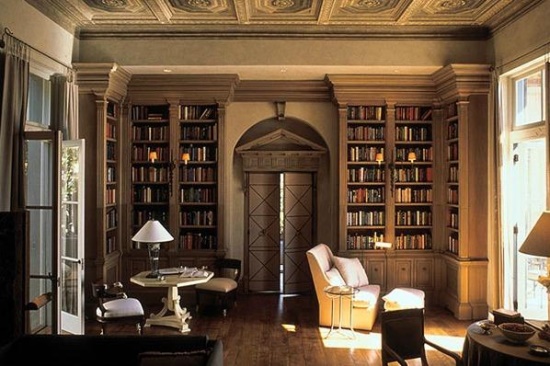 At the opposite end of the drawing room Saladino installed bookcases flanking a pedimented doorway set into a triumphal arch hung with leather doors studded with oxidized-bronze nailheads in a Roman grille pattern – repeating the classical theme of the coffered ceiling and Ionic capitals on either side of the tapestry. This particular space continues to provide great pleasure and inspiration. 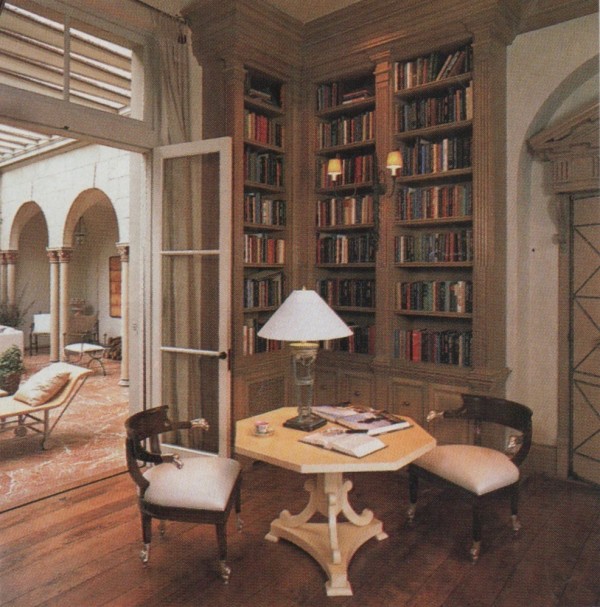 The library opens onto the villa’s central inner courtyard on one side, evoking the spirit of an ancient Roman villa.

For a small room with a high ceiling off the drawing room Saladino commented “I paneled the room, keeping the paneling low to reduce the scale, and painted the upper part of the walls a shade of blue-gray. What had been an awkward space was transformed into a cozy refuge.”

The romantic inner courtyard is the heart of the house and retains a modified electric retractable glass roof first installed by George Washington Smith in 1926. Saladino looked to Italy’s great houses, installing a central impluvium into a new rojo alicante marble floor, and replaced original corkscrew columns framing the arcades with simpler Tuscan ones. Rooms such as this conjures visions of a bygone era, of The Great Gatsby and Hollywood glamour. Again, the formidable scale of this room is tempered by the residential scale of the columns and human scale of the fireplace niche. 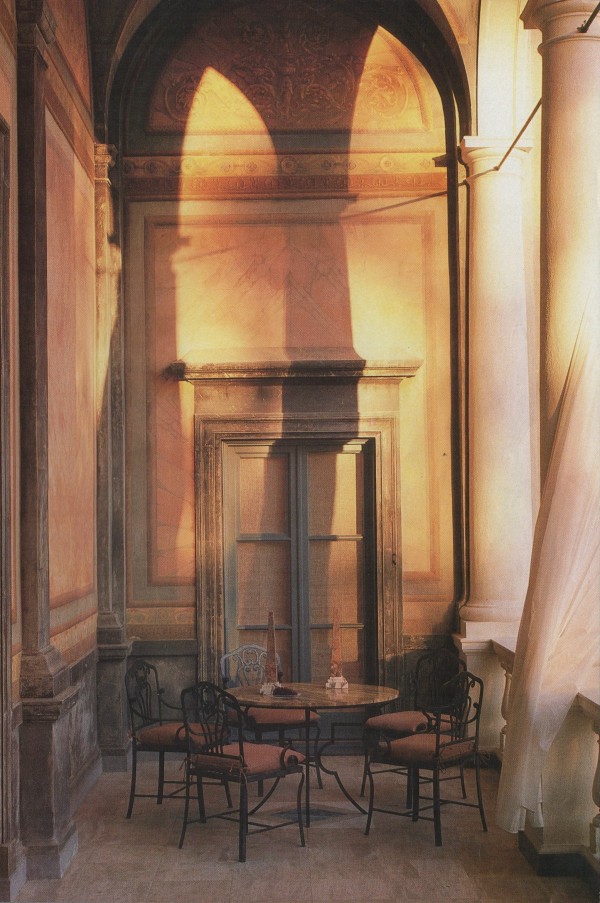 Billowing parachute cloth adds a theatrical note to the south loggia with walls painted faux marbre in shades of sienna and ocher. 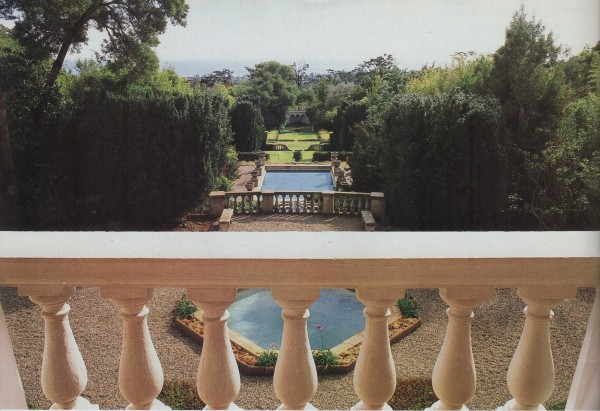 The view from the loggia takes in the classically laid out gardens and cascading water features culminating with the tea pavilion. 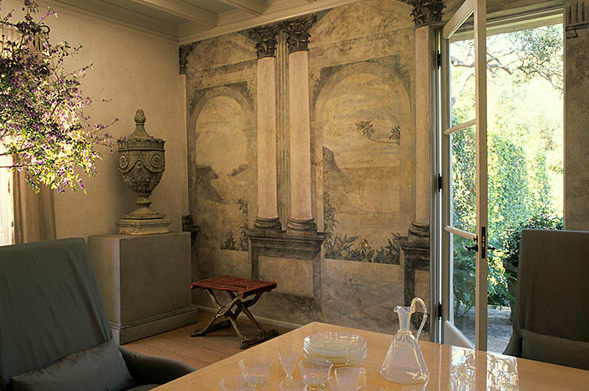 Saladino introduced a garden atmosphere into the dining room by referencing an imagined view from Villa Farnese, on which the Mediterranean-style villa was based, with trompe l’oeil frescoes evoking the illusion of dining in an Italian loggia. Furthering the indoor-outdoor quality of living so distinctive to California are pair of large-scale outdoor Adam-style lead urns on plinths, which conceal stereo speakers. 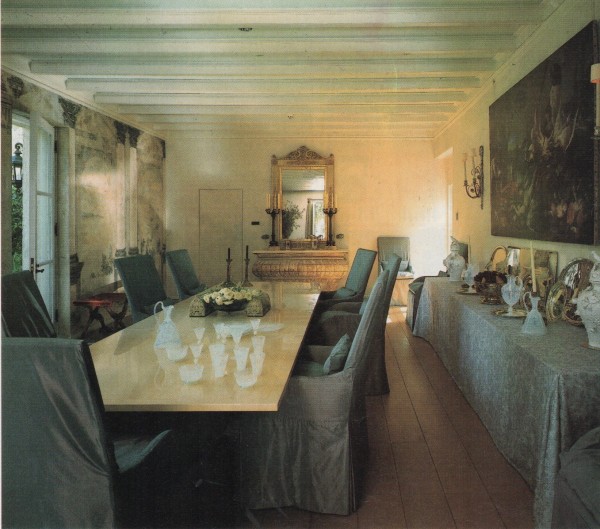 The opposite view of the dining room reveals Saladino’s mastery at creating quietly romantic and sophisticated rooms that are timeless, comfortable and energized by an understanding of how we want to live in the present. While a draped banquet table lined with silver serving pieces and Venetian glassware points to the classical past the luxe sycamore and lacquer dining table and commodious chairs represent the present with a taste for luxury and comfort. 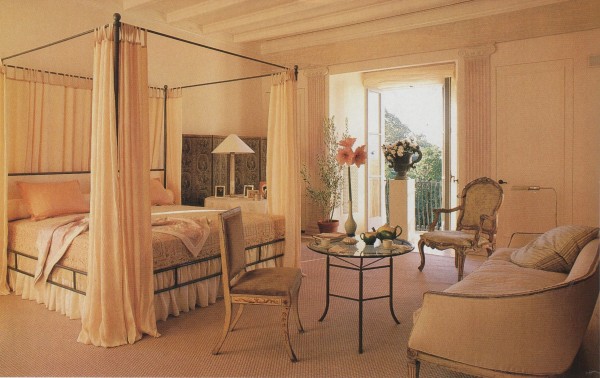 The master bedroom is a study in warm white utilizing texture and a variety of shapes and materials for contrast and interest. 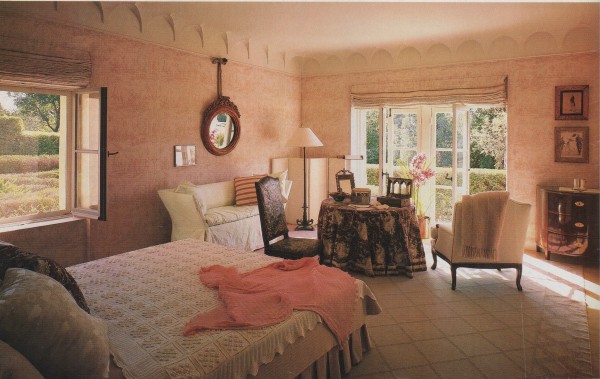 A light and soft coral hued toile from Lee Behren Silks defines the romantic lower floor guest room, which opens onto the gardens.

THE GARDENS – THEN & NOW 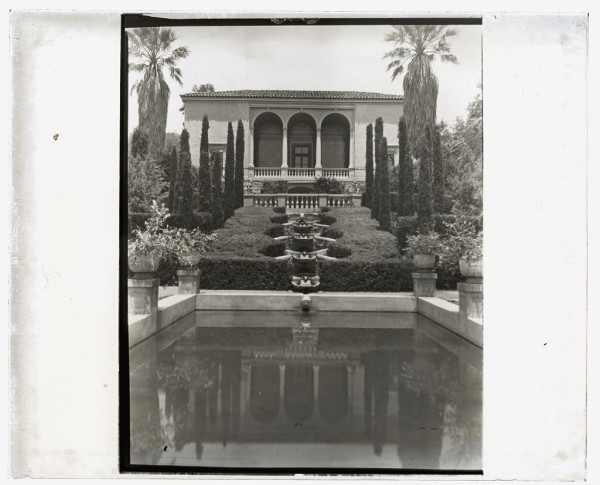 A view of the water chain as photographed in 1923. 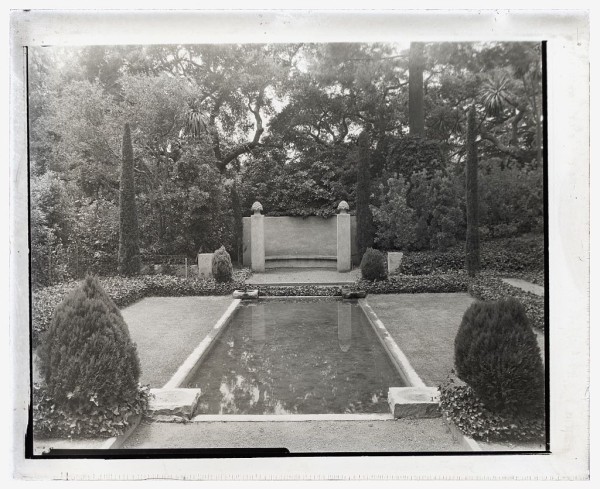 The reflecting pool as photographed in 1923. 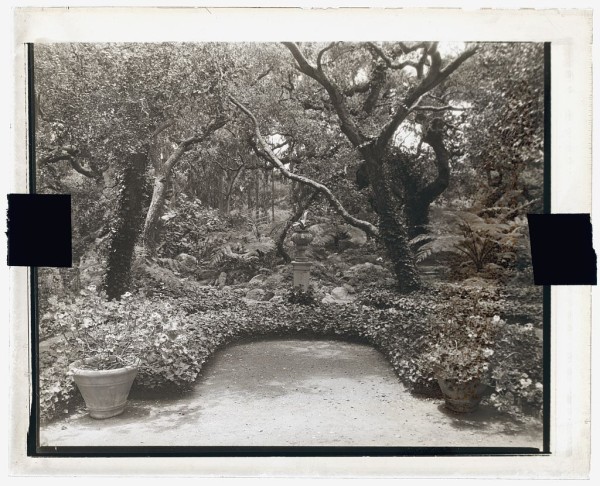 A terrace as photographed in 1923. 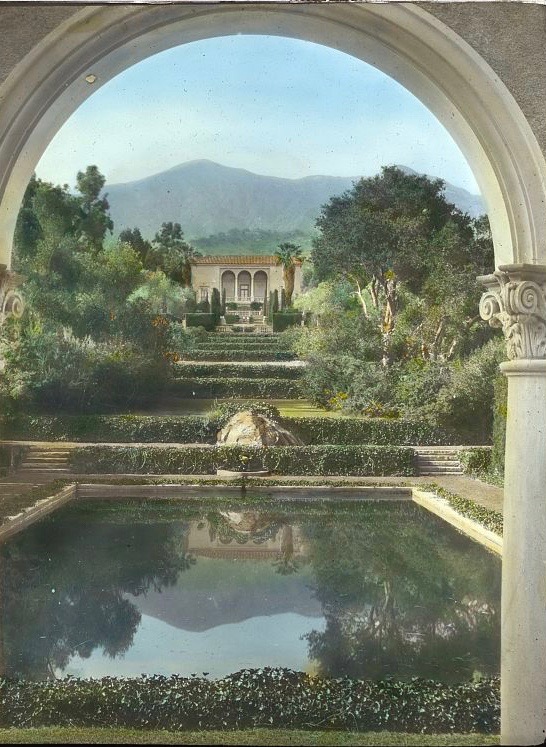 A colorized view from the tea pavilion toward the villa as photographed between 1920 and 1930. 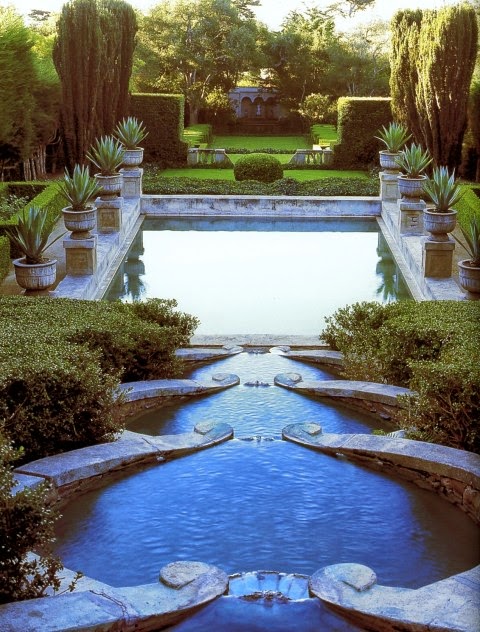 The Rococo curves of the water chain, softened by yew hedges, contrasts the angular formalism of the reflecting pool lined with stone urns planted with agave. Beyond the next tier, framed by a broken stone balustrade, is the lowest tier, ending with an Italian-Renaissance-style pavilion. Archival photos taken in the 1920’s were referenced when restoring the gardens created by landscape architect Helen Thorne.

Hedges of boxwood and yew have been restored to their lyrical past, framed out by walls of yew and Romanesque columns supporting a pergola draped in wisteria. 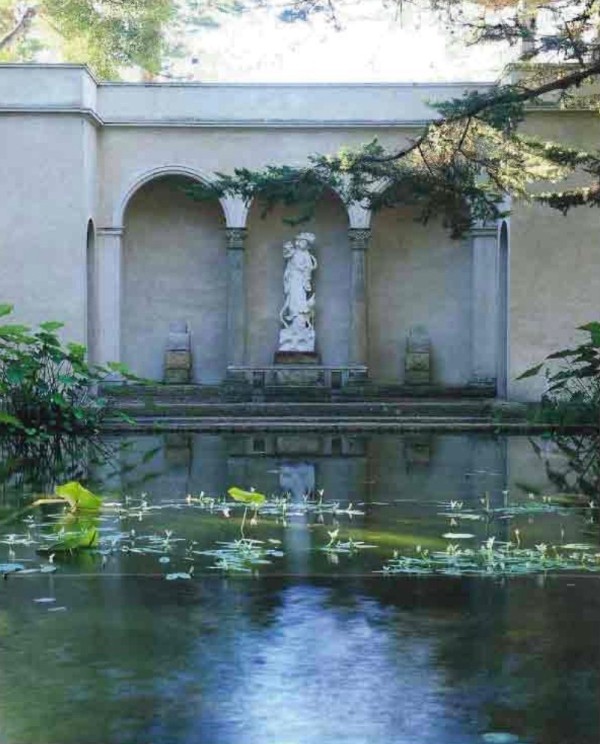 Helen Thorne traveled far and wide – from Italy, France and England to the Far East – in search of beautiful and timeless sculpture for her gardens. Here, a marble statue of Quan Yin still resides in the arcaded tea pavilion overlooking the lotus pond. 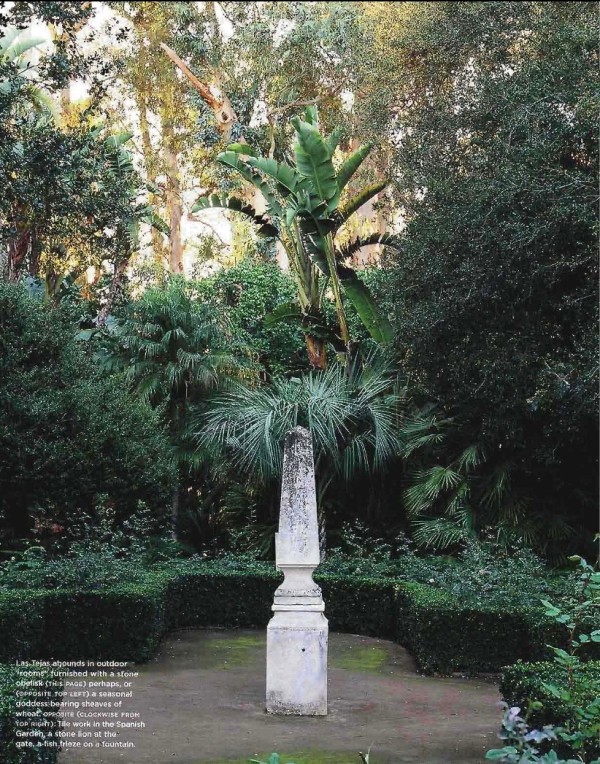 An outdoor room is defined by a hedge of boxwood encircling a stone obelisk, quite possibly the same space featured in a vintage photo above. 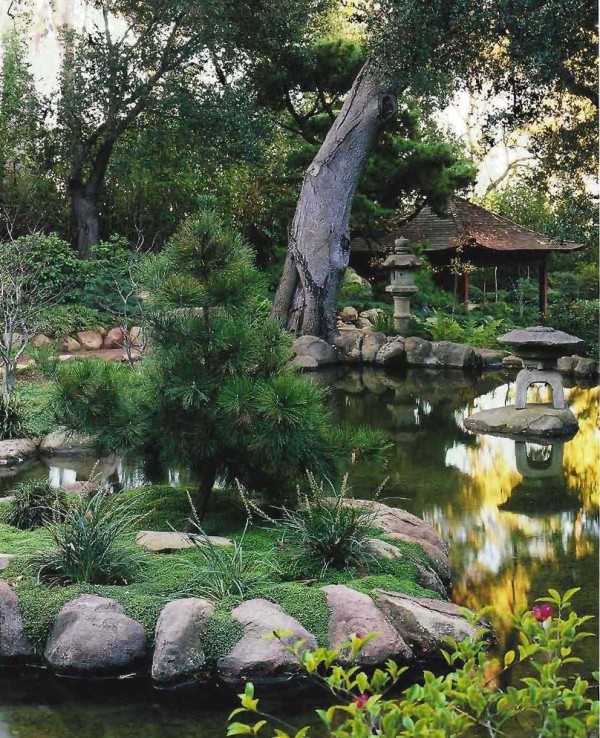 The vast estate affords stylistic diversions from the classical, as in this Japanese-inspired garden on one side of the villa, which includes a ceremonial tea house set upon a small lake. 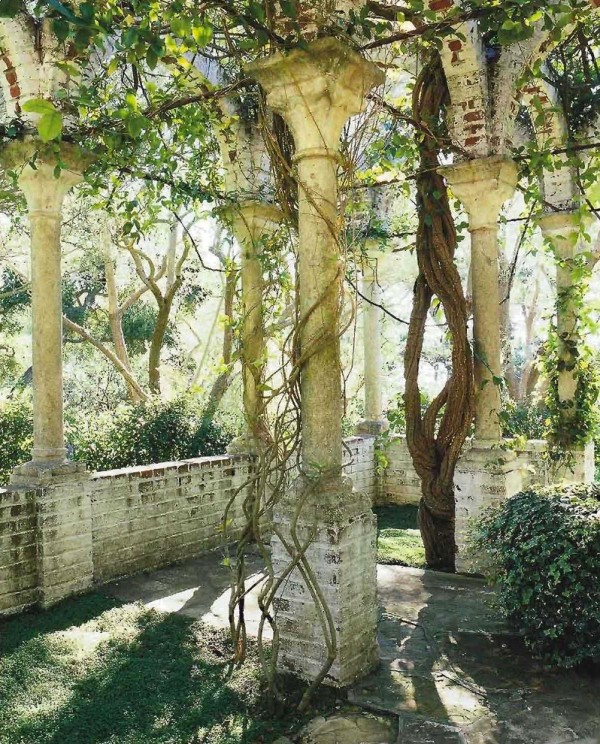 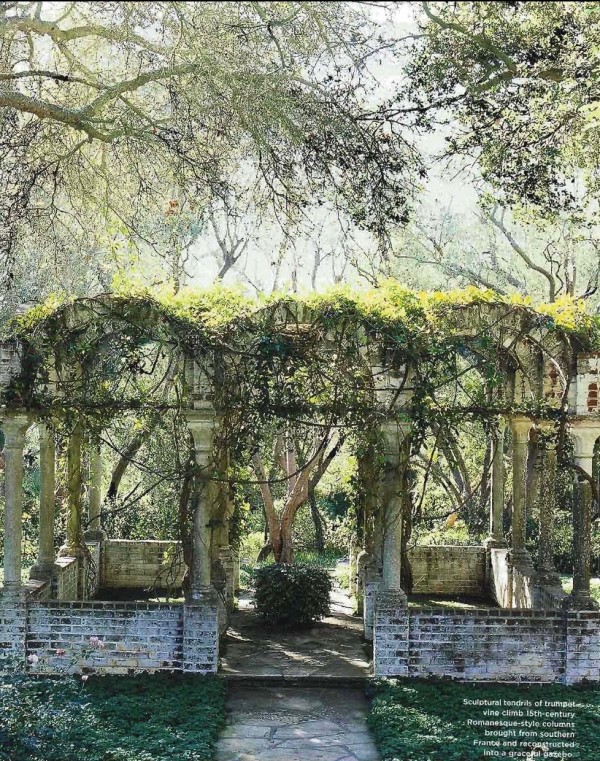 This vine covered arbor is yet another horticultural folly expressed on the property.

This concludes our tour of the forever romantic Las Tejas. Should any of you possess photos which I have not included, and you would like to share them, please forward them to info@worthlandinteriors.com. I will, of course, credit your contribution!

6 Responses to The Enchanting World of Las Tejas