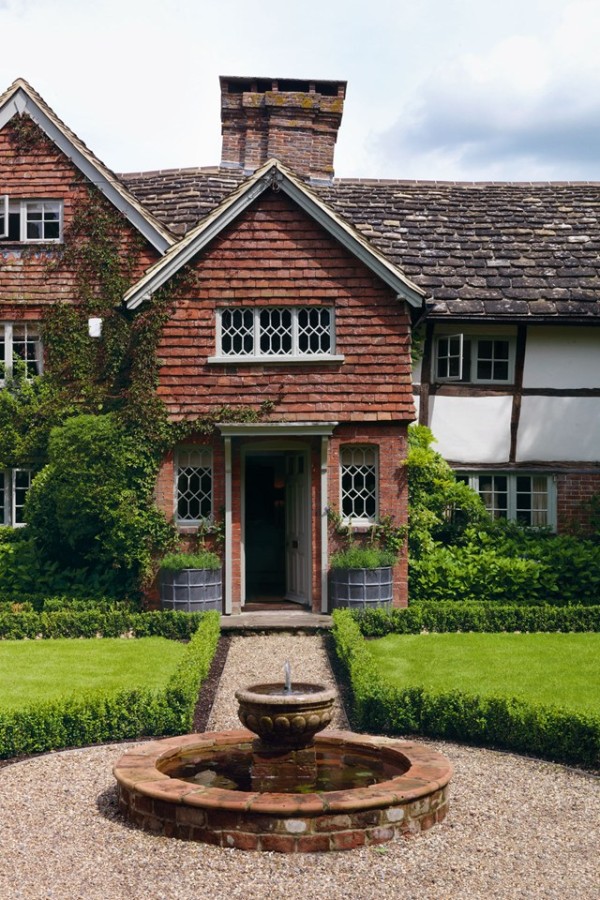 The spirit of autumn is on my mind but, thus far, not in the air. The countryside, with its abundance of tress, possesses the promise of changing color. It’s only a matter of time. In the meantime, the comfortably charming and stylish West Sussex country house of interior designers Paolo Moschino and Philip Vergeylen is a welcome distraction from the final days of summer before the first signs of autumn appear.

The couple, whom own and run Nicholas Haslam, which makes and sells furniture, fabrics and lighting and also deals in antiques, purchased the half-Tudor half nineteenth-century house and barn practically on the spot. Without first viewing the interiors they knew it was perfect the moment they set eyes upon it through the front iron gate. Merely an hour from London by train its location provides them ideal proximity to life in the city and the restorative qualities of country living. Yet reality soon proved that two interior designers with exacting tastes would not settle on what lied within. In short, they tore out walls and ceilings, reconfigured rooms to bring in the light and allow the rooms to flow into one another, and renovated the barn into a welcoming guest wing.

The results speak for themselves, and you can see a hint of Nicky Haslam here and there from those years Moschino worked alongside the designer. Yet here the colors are lighter and more neutral, sometimes richer, but never overly pretty. The one exception is the coolly romantic dining room with blue-and-white painted walls based on old English willow-patterned china, which you have likely seen popping up on Pinterest (albeit, more often than not, without due credit or, worse, with incorrect details.). I have, personally, only seen a photo or two of this enchanting property pop up here and there and wanted to add the whole story and its images to my blog, which you will find labeled under English Country House Style. Although the setting when photographed is redolent of Spring allow your mind to wander and imagine these cozily appointed rooms aglow in the golden light of autumn. It’s coming soon, to a township near you! 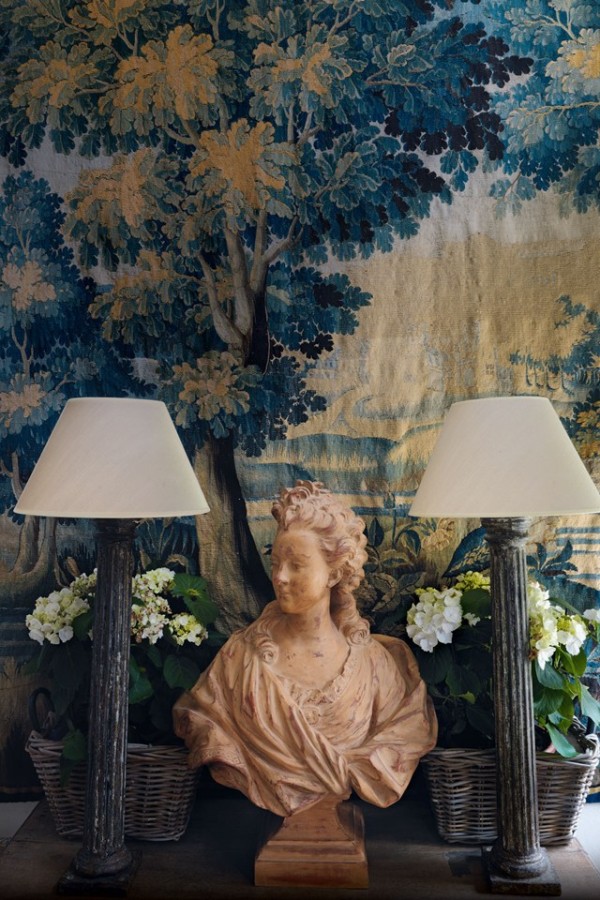 In the entrance hall, for example, a seventeenth-century Flemish tapestry hangs behind a chest on which a pair of Belgian lamps, made from cast-iron balusters, guard a terracotta bust of Madame du Barry, Louis XV’s last mistress. 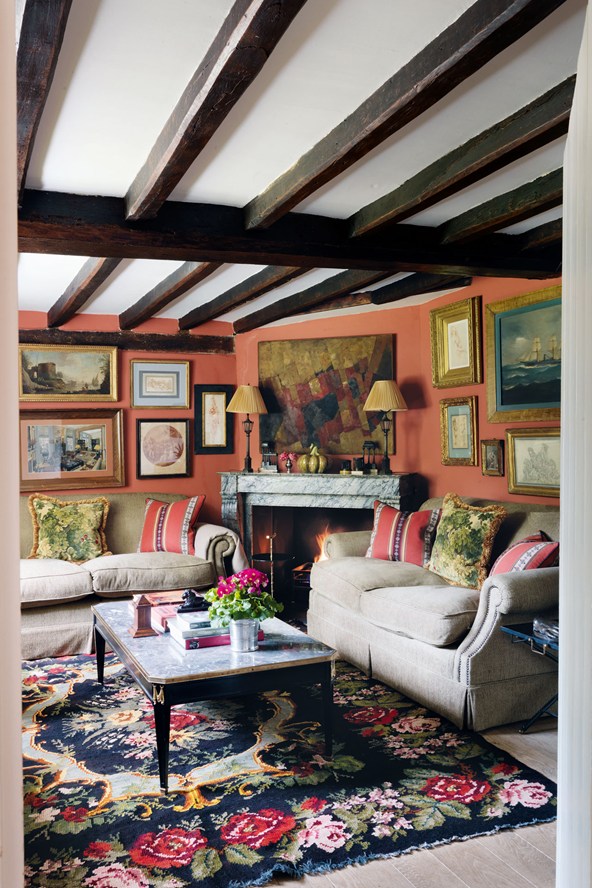 A nineteenth-century French chimneypiece anchors the densely hung pictures and the symmetrical seating in the cozy sitting room just off the entrance hall, in the front of the house.

Curiosities in one end of the double drawing room include two of Paolo’s collection of silver tortoises. 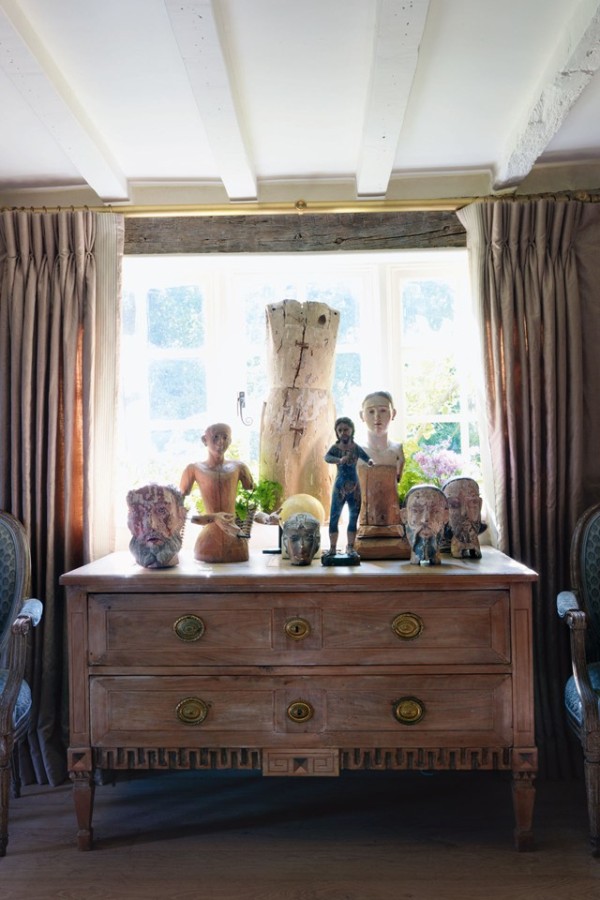 An assortment of Catholic statuary. 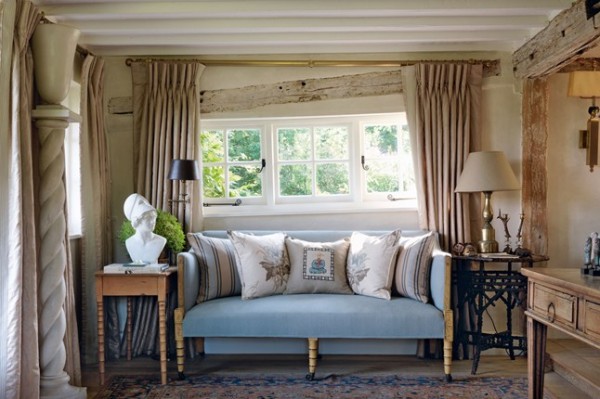 The drawing room is composed of two smaller rooms. Can you recognize the barley-sugar torchière, one of a pair, by Jean-Michel Frank from the living room of their London townhouse? 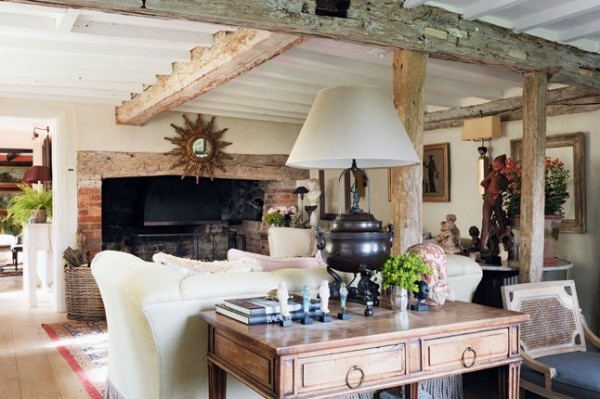 An eighteenth-century walnut table hides the back of the sofa in the drawing room. 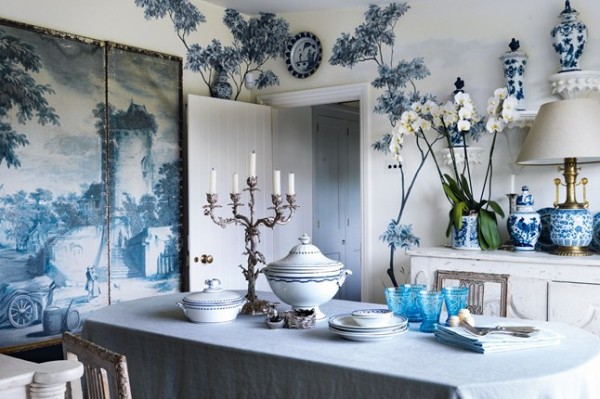 The dining room’s blue-and-white scheme is based on the eighteenth-century painted French screen that hangs on the wall.

The collection of Tournai porcelain was amassed over several decades.

The garden table is made from a Tuscan olive press. 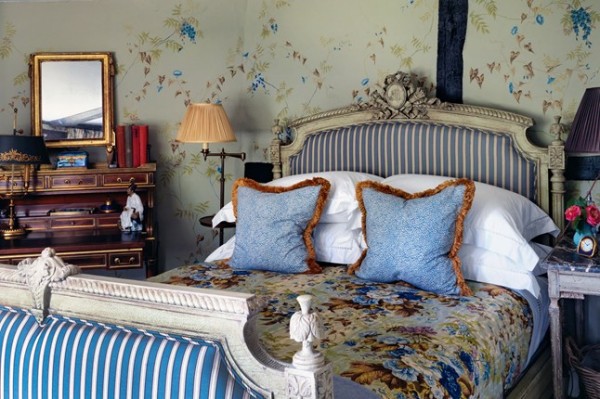 The walls of the attic bedroom were painted freehand by artist Dawn Reader, in a design that echoes the colours of the Le Manach fabric on the bedcover and curtains. Paolo was drawn to the nineteenth-century French bed because the ‘PM’ initials carved into the headboard are his own. 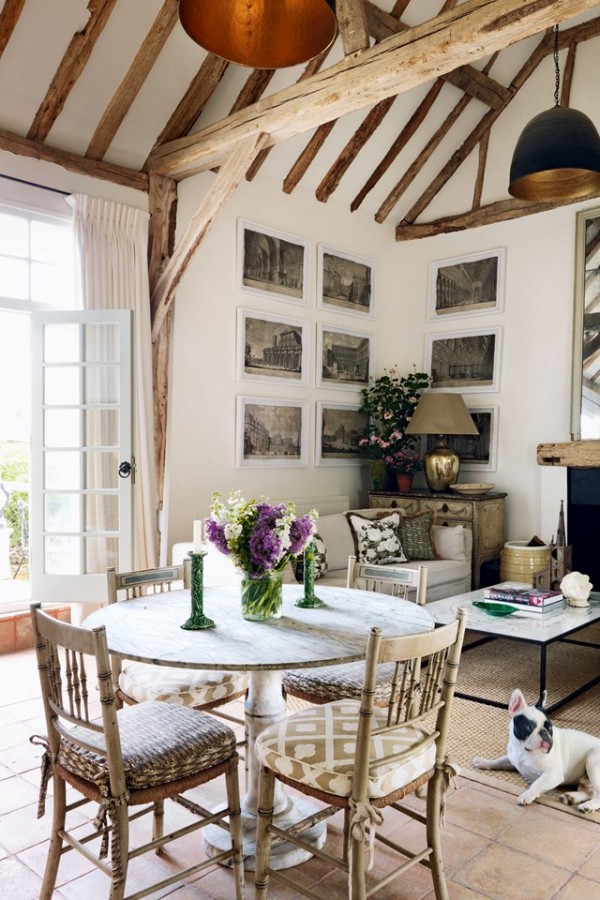 The breakfast room is a new extension to the farmhouse. The chandelier is a copy of an eighteenth-century Italian design, by Nicholas Haslam, which also supplied the linen covering the chairs.

In the barn, the cupboard in the main room is by Nicholas Haslam. 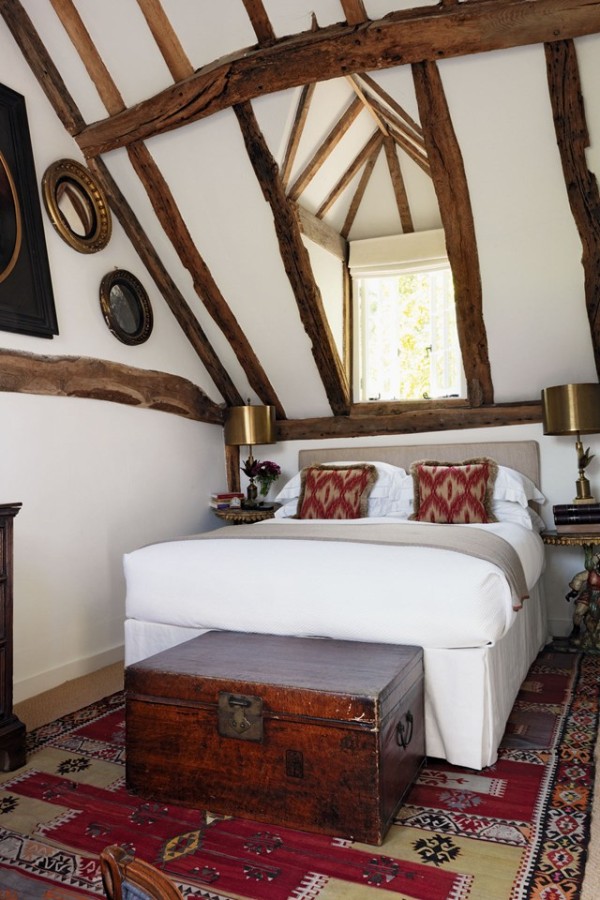 The beams in the main bedroom, as in the rest of the barn, were bleached to create a lighter effect.

From the March 2013 issue of House & Garden. Photography by Simon Brown.