Since I began my blog two years ago I have wanted to write a post about American interior design icon Angelo Donghia.  And now, with a retrospective of his work in full swing at the New York School of Interior Design Gallery, there may never be a better time to honor one of America’s most influential interior designers whose signature style and business savvy changed the landscape of interior design.

A high achiever since childhood, Donghia was president of five organizations in High School. He later went on to the Parson’s School of Design, and upon graduation in 1959 he decided to apply for jobs with three interior designers: Michael Greer, Yale Burge and Billy Baldwin. He happened to call Yale Burge first and was offered a job on the spot, which continued until Burge’s death in 1971 after the duo had formed a partnership, Burge-Donghia. It was during their partnership that Vice Versa was formed exclusively for Donghia’s rug and fabric designs. To display his fabrics he used the furniture he had designed for customers, which he eventually sold through the same outlets. By the age of forty-five the creative polymath had amassed four distinct corporate entities : a fabric company (Vice Versa), his eponymous furniture company, a licensing company and a growing collection of design showrooms to the trade throughout the country – all successfully without so much as fracturing his reputation in the eyes of high profile clients the likes of Halston, Ralph Lauren, Mary Tyler Moore, Barbara Walters, and Liza Minnelli. Particularly rare among his peers of that era, Donghia successfully navigated the creative waters of high style interior design with assured business acumen, securing his success and longevity. His design and business models have since inspired a host of designers, providing a framework on which to build their growing businesses into successful enterprises.

Stylistically Donghia stood out from the crowd. From his early designs we are witness to the influence of his classical training that segued into a brief fascination with bohemian exoticism in the later 1960’s until arriving at his unparalleled classic-contemporary vocabulary. By the 1970’s he had defined his style, introducing overscale furniture like none seen before it into spare yet glamorous backdrops in which to showcase select pieces. A product of the times, his rooms were as sexy as his Studio 54 clientele. He approached color in much the same way one would to dress themselves, enveloping his clients in the same colors they felt comfortable wearing. His preference for neutrals allowed the nuance of form and texture to predominate while providing a quietly elegant backdrop in which to display important pieces. He was, as is now, particularly known for his use of large-scale, “fat” furniture, men’s gray flannel suiting for walls and upholstery, and reflective high gloss painted walls and silver-foil ceilings. Many of his furniture designs are still in production and near vintage pieces can be found on sites such as 1stdibs and Viyet. Furniture can sometimes be like clothing: Just when you’ve decided they will never come back in vogue and you dispose of them, they do. I wonder what became of my cream chenille c1994 Luciano club chair? But more importantly, I wonder what Mr. Donghia would be up to today. He would be eighty years old. In some small way, this post is an homage to one of our greats. Hail Donghia! 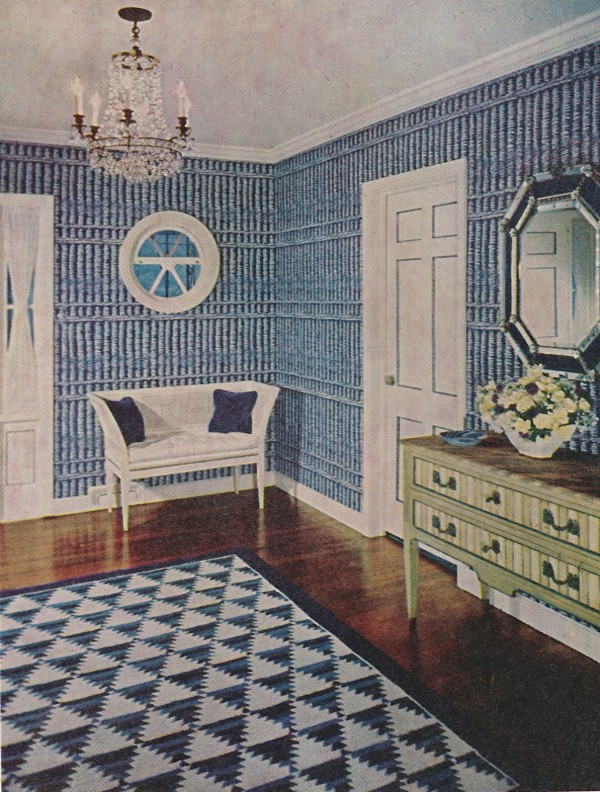 A rendering for a classically crisp entrance hall that was decorated sometime in the 1960’s. 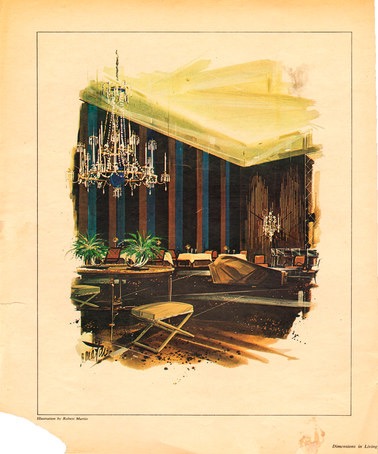 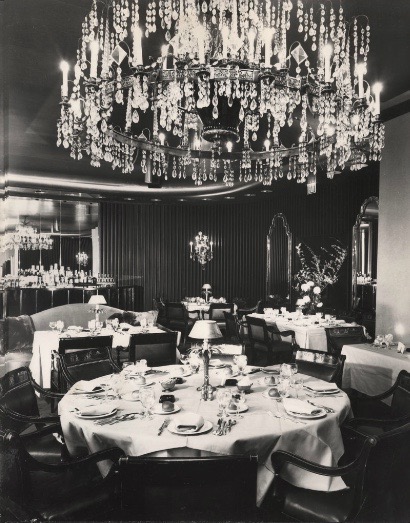 A sketch and photograph of the luxuriously urbane Metropolitan Opera Club, the 1966 New York project that made Donghia a star. The room featured a silver-foil ceiling, blue-glass chandeliers and black upholstered Regency-style chairs. 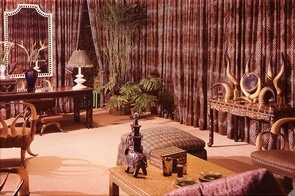 Donghia’s early decorating work for the Halston showroom in New York in 1967, with layered patterns and lush colors. 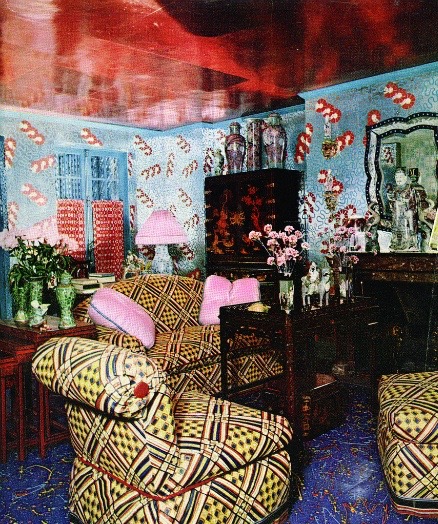 The garden room in Donghia’s Manhattan townhouse was decorated in a cacophony of color and pattern – a marked difference from the monochromatic glamour we’ve come to know of his mature style. The ceiling was covered in tangerine foil to reflect warm light. The wallpaper was by Zandra Rhodes; the fabrics were from Donghia’s own company, Vice Versa. 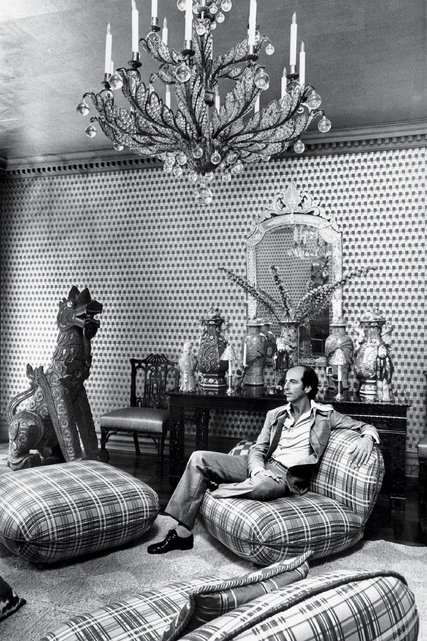 Angelo Donghia at his uptown New York City townhouse in 1970, seated on a chair from his Vice Versa collection. 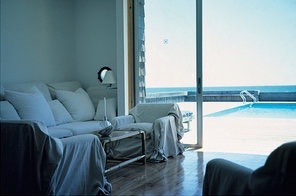 His Fire Island house by architect Horace Gifford in the 1970s. 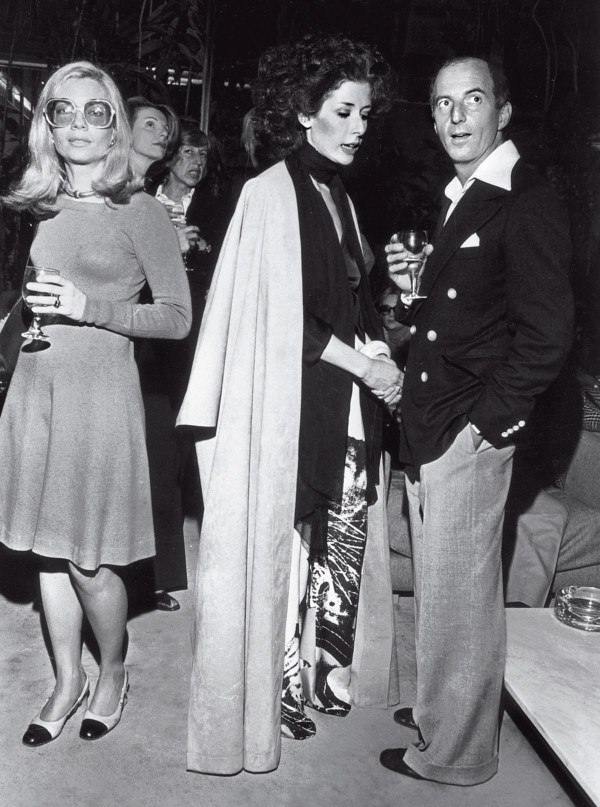 The designer playing host at one of his legendary parties in his townhouse during the mid-’70s as photographed by Bill Cunningham. 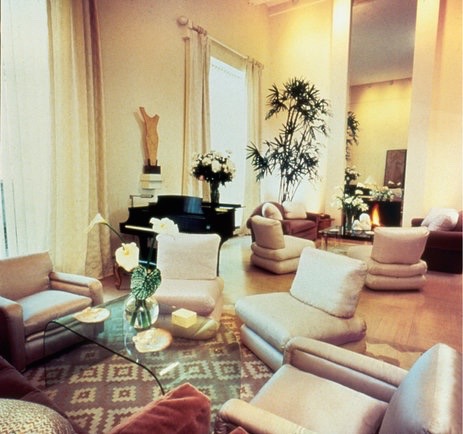 The living room of a private client, completed in 1977, with Donghia’s Two Tier chairs and few architectural trimmings 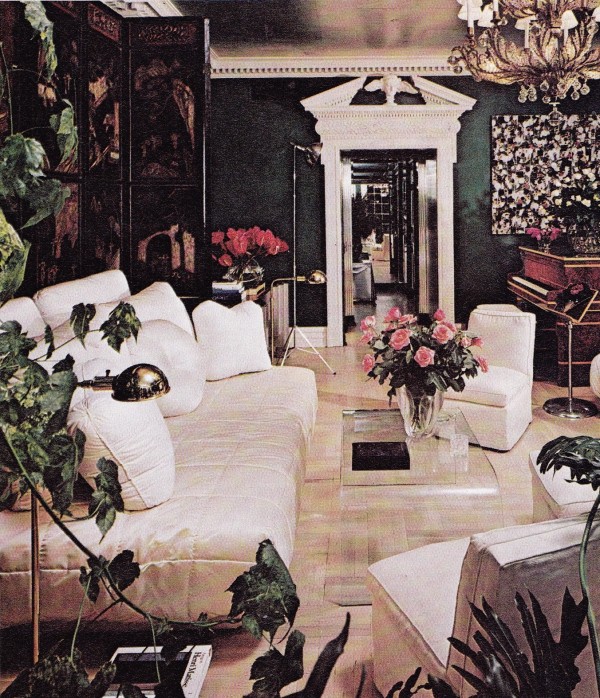 The living room in Donghia’s New York City townhouse, featured in the November/December issue of Architectural Digest, made a star of the magazine’s editor, Paige Rense, and catapulted Donghia further into the design world stratosphere. Mary Tyler Moore loved the Venetian chandelier so much Donghia installed it into her New York City dining room. 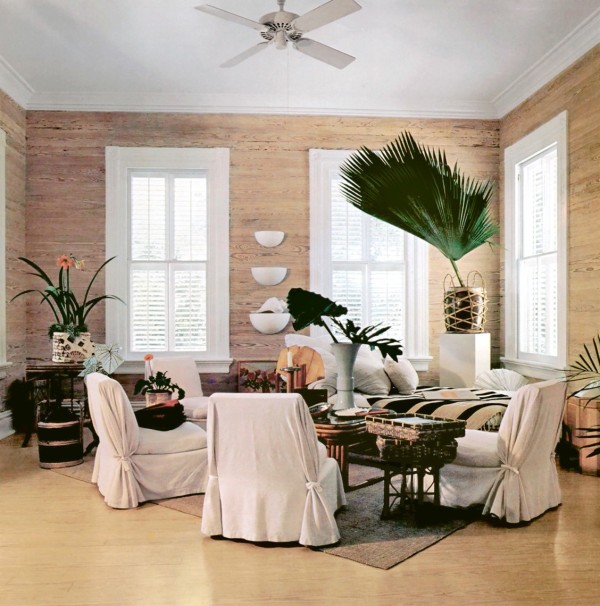 Donghia’s Key West living room, 1977. Donghia bought a Key West house in the mid-1970s, at the height of his career. The living room’s toga-wrapped chairs and bamboo furniture reflected his elegant informality.

This ad for Vice Versa appeared in the July/August, 1979, issue of Architectural Digest.

This ad appeared in the September, 1980, issue of Architectural Digest. 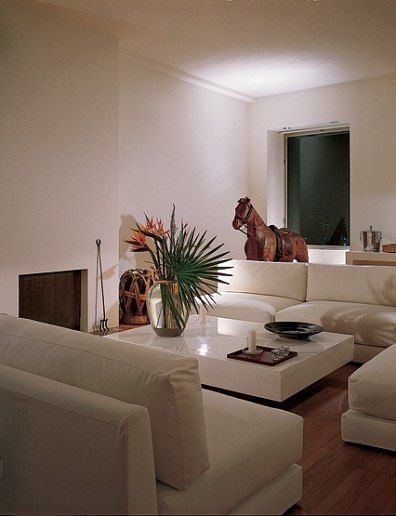 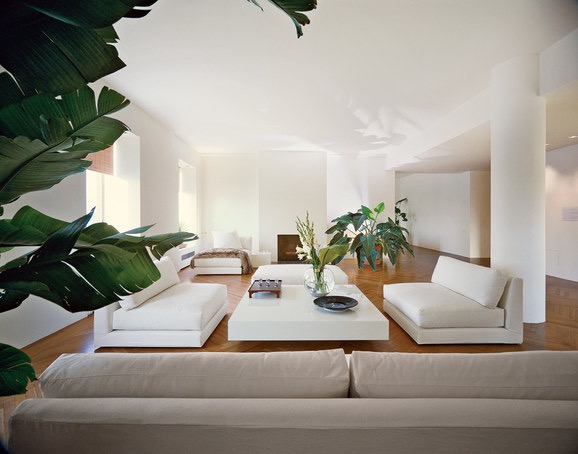 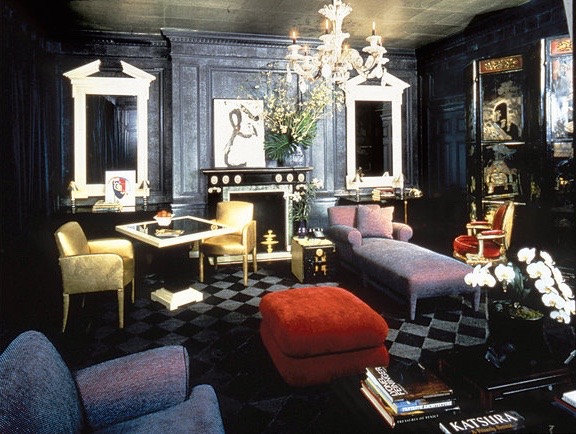 The rich color scheme and watery silvered treatment of the room’s paneling conjures a modern take on a Venetian palace in Donghia’s installation at the Kips Bay Showhouse in 1981. 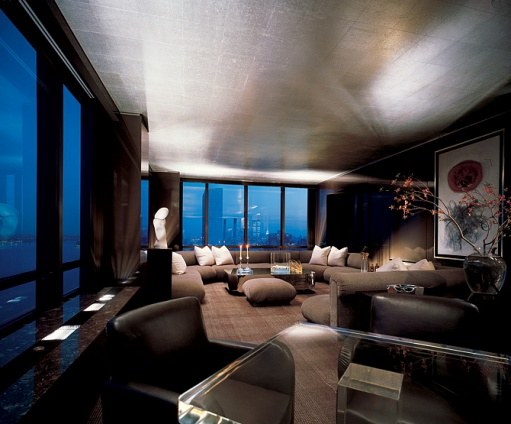 In the early 1980’s Donghia designed an apartment near New York’s United Nations building. The designer who had popularized gray flannel as an upholstery fabric once again opted for a monochromatic palette, as well as a silver-foil ceiling—a Donghia trademark. 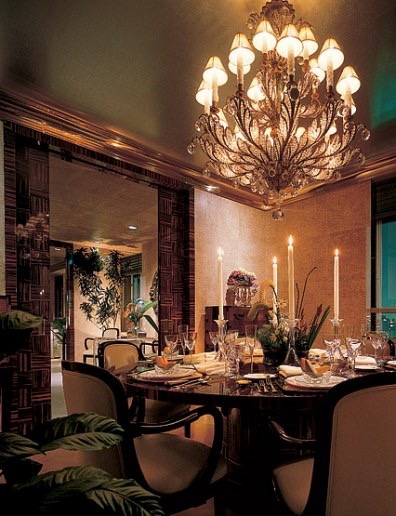 Mary Tyler Moore loved the crystal beaded chandelier from Donghia’s apartment so much that he decided to install it in her New York apartment, which he designed in the early 1980s. 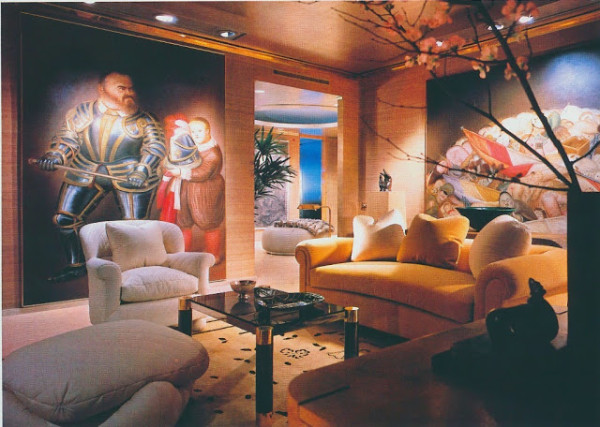 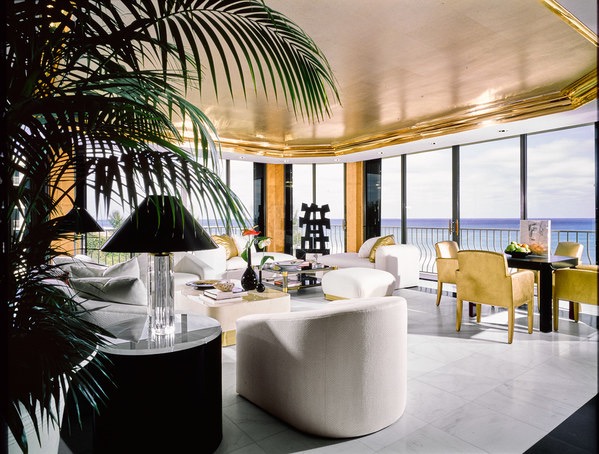 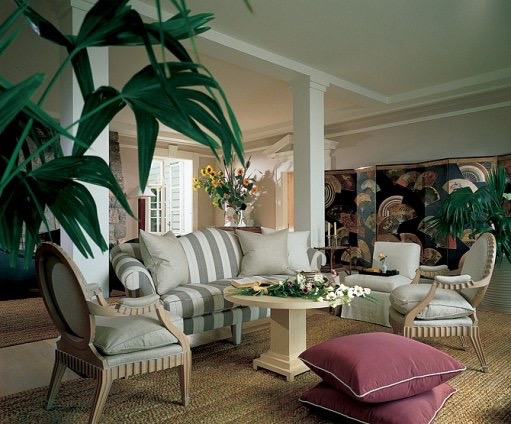 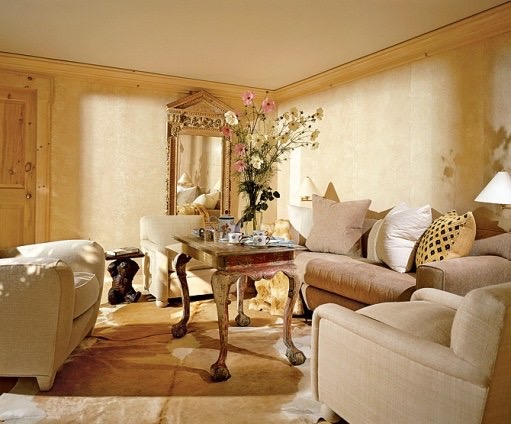 The living room, top photo, of Donghia’s Lake Hill Farm, Connecticut, retreat included a pedimented doorway and a keystone over French doors to imbue the room with a classical context in which to decorate utilizing furniture of his own design. Of the oversize furniture in the comfortably cozy sitting room Donghia remarked “Better overscale than underscale “.