The Temple of the Four Seasons 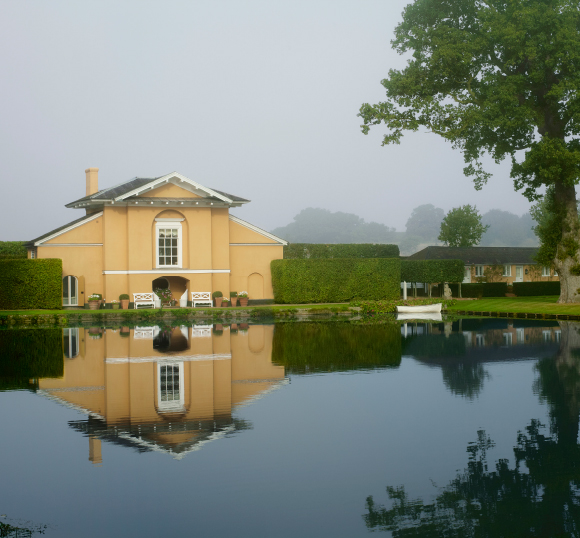 It is believed that The Temple of the Four Seasons, also referred to as The Temple in Stoke-by-Nayland, was built by architect Robert Taylor sometime around 1750 after he returned to England from his studies in Rome. Resembling his Asgill house, The Temple represents the influence of Italy on the development of his architectural vernacular, conjuring Palladio’s summer retreats designed for wealthy patrons escaping the suffocating heat of Venice for the cooling breezes of the Venento. Fashioned in the golden glow of Italy’s favorite color, a rectangular canal extends two-hundred yards from the arched loggia of the ocher villa. Representative of a new vogue in fishing lodge design, The Temple was a place for pleasure and for show.

The Temple represented an Arcadian paradise, outfitted in the 18th-century by the Rowley family as a place for guests to stroll down to from their estate Tendring Hall, designed by John Soane, for a spot of fishing. A sense of order and calm prevails over the classical proportions of the villa set against symmetrically laid-out gardens and water sources. While gentleman would shade themselves under the chestnuts along the canal whilst fishing the ladies would chat, paint a pastel water-color, or retreat to the saloon to embroider needlepoint.

In subsequent years Tendring Hall was demolished and The Temple became abandoned and withered. It wasn’t until the later 1950’s that decorator David Hicks discovered and saved it from demolition, seeing in it its potential as laboratory for his interior and garden design ideas. Sometime after that Charles Beresford-Clark would discover it, once again derelict. Two leases later it passed onto interior designer Veere Grenney, who has maintained the property since.

A special thanks to Ashley Hicks for providing archival photographs, c1957. 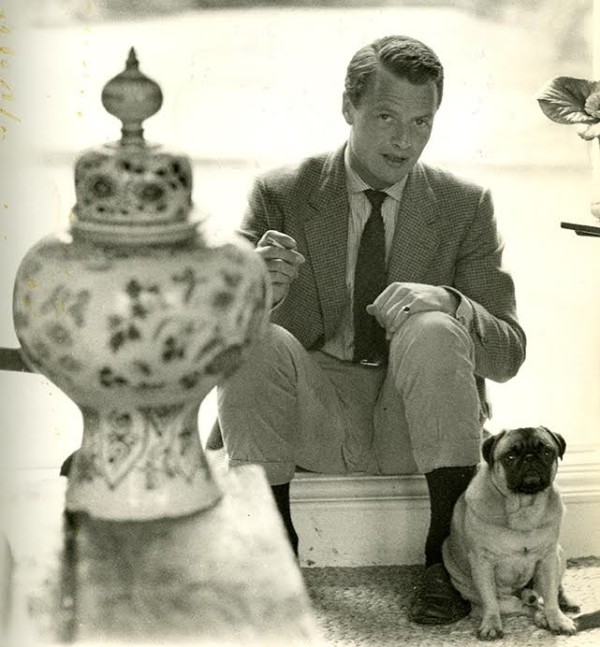 Still owned by the Rowley family, David Hicks leased The Temple and contracted classical architect Raymond Erith to restore it for weekend use in the years prior to his marriage to Pamela Mountbatten. One of the lodge’s notable architectural additions by Erith is the oil-de-boeuf window which allowed light into the dark kitchen. Taking advice offered by John Fowler, Hicks’ contribution included hornbeam hedges flanking the sides of the lodge. The only visual reference I could uncover of David Hick’s time spent at The Temple is a drawing he created in 1957 that he had made into Christmas cards. His son, Ashley Hicks, kindly provided before and after photos of The Temple, and one of Mr. Hicks sitting in the upstairs window with his pug Algy.

Living in Vogue by Judy Brittan and Patrick Kinmonth, published by Holt, Rinehart and Winston, 1984. Photography by Derry Moore.

With special thanks to Toby Worthington, most photos originate from English Style by Suzanne Slessin & Stafford Cliff, with photographs by Ken Kirkwood, 1984. 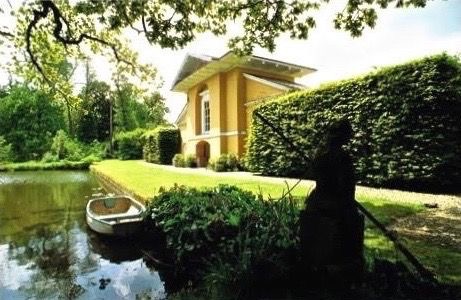 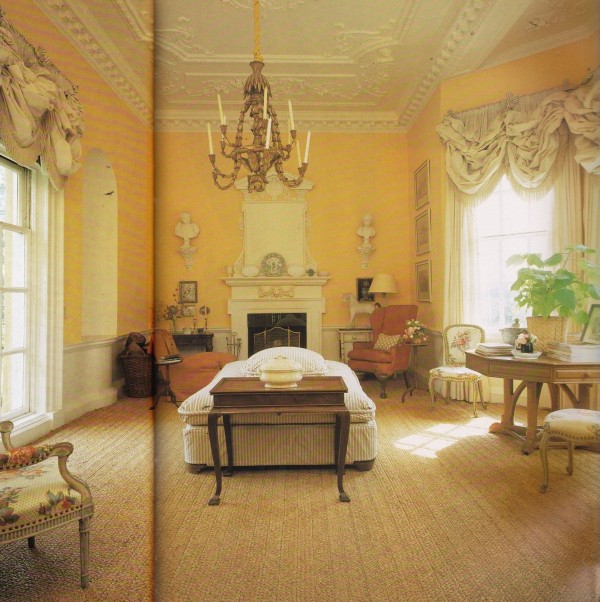 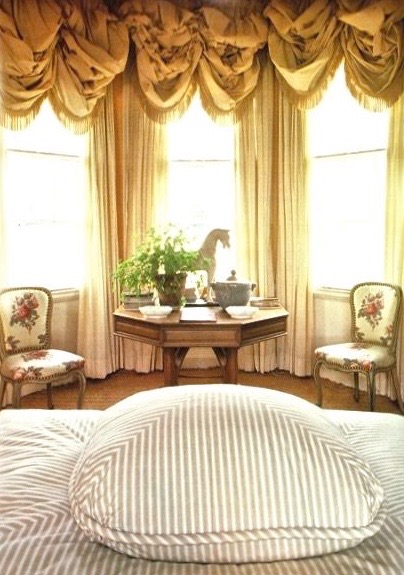 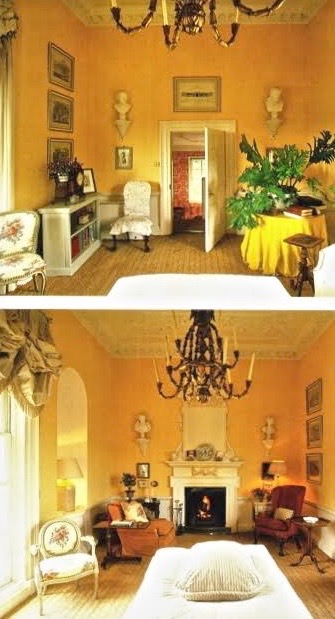 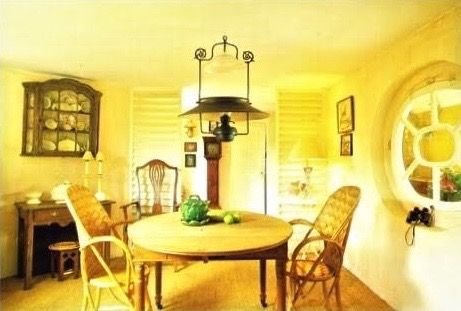 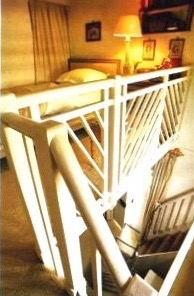 Two leases later antiques dealer Charles Beresford-Clark acquired The Temple, which had once again succumbed to wildness, transforming it into a chintzy country house in the manner of Colefax & Fowler. Essentially a one-room house, there is a kitchen and a small bedroom. It is the airy saloon with its graceful proportions that elicits cause to pause. Simply and sparsely furnished, Beresford-Clark allowed the saloon’s classical proportions and decorative plasterwork to speak. Approached by a wide staircase and low Georgian door, one experiences a sense of awe when passing into the large, classically proportioned drawing room with a fourteen-foot-high ceiling. The plasterwork design of four heads decorated with swags and flourishes on the ceiling represents the four seasons, for which the lodge was named. Simple, albeit extravagant by today’s standards, unbleached linen festoons and Suffolk rush matting underscores the grandeur of the room’s architectural appointments. It’s easy to imagine characters from a Merchant Ivory film entering, dressed in their summer linens, the women toting matching parasols. 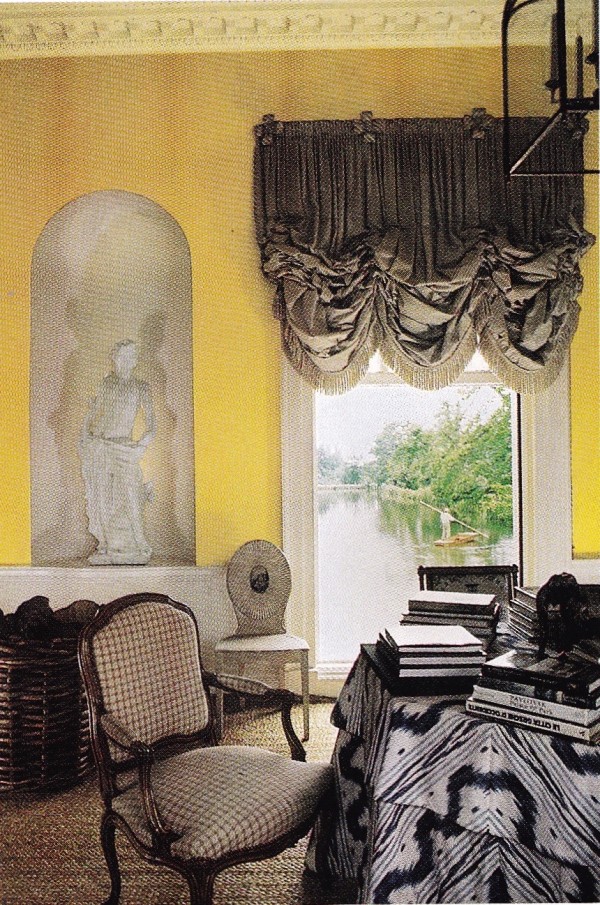 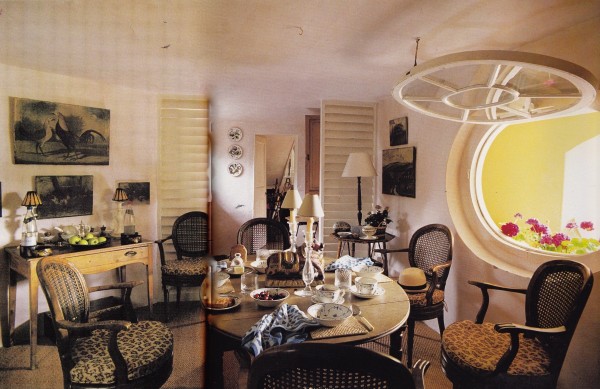 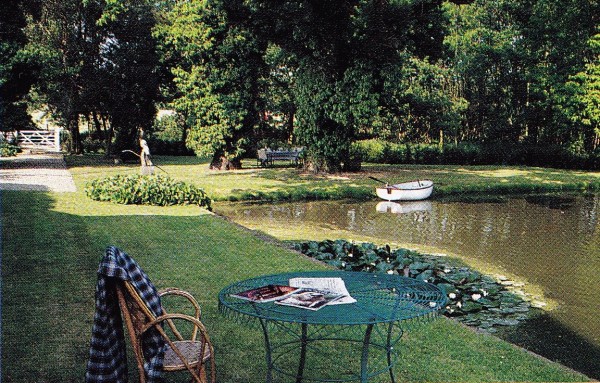 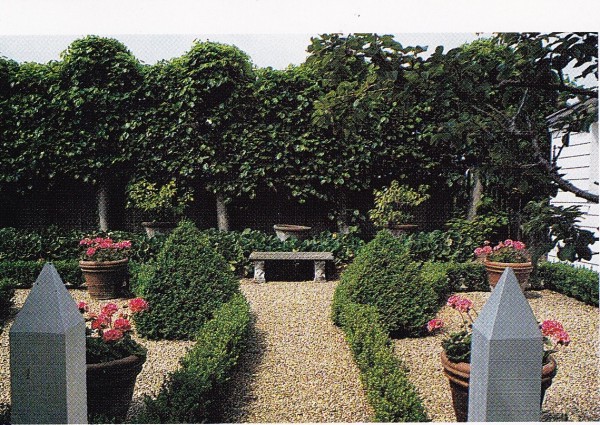 In 1983 New Zealand interior designer Veere Grenney took over the lease and gave its rooms his classical imprint. For decades he had dreamed of living here, having seen it in a magazine when he was fourteen during David Hicks’ occupation. The saloon’s architectural quality naturally spoke to Grenney’s classical sensibility, with its east-to-west orientation taking full advantage of the sun rising over the canal and setting over the landscape.

While the saloon demanded a more formal approach the small ground floor rooms required a simpler one. Only three rooms in all, the ground floor consists of a kitchen-dining area below and a tiny bedroom with bathroom wing to the side. Grenney appointed them with country furnishings and simple decor appropriate to their size and scale. With views of the canal and countryside beyond from the kitchen’s oil-de-boeuf window Grenney found a natural space to hang 18th-and-19th-century unframed naive oil paintings of animals. For the lodge’s bedroom he used simple ticking and country antiques. To accommodate guests Grenney renovated dog kennels in country style, allowing them freedom to relax and roam the pastures with their coffee or tea in the mornings dressed in their pajamas.

The sunny Chinese yellow walls of the saloon under Grenney’s charge is reminiscent of Nancy Lancaster’s “buttah yellah” drawing room at Avery Row in London. He retained Beresford-Clark’s festooned shades and four Roman busts of emperors and philosophers on brackets, adding his own full-length statues of huntsmen into the niches. The same rush matting covers the floors, onto which he floated French country chairs covered with a Brunschwig & Fils blue-and-white fabric with stylized Chinese jars around a table covered with a blue-and-white Ikat pattern, complimenting his collection of porcelains on the fireplace mantel. 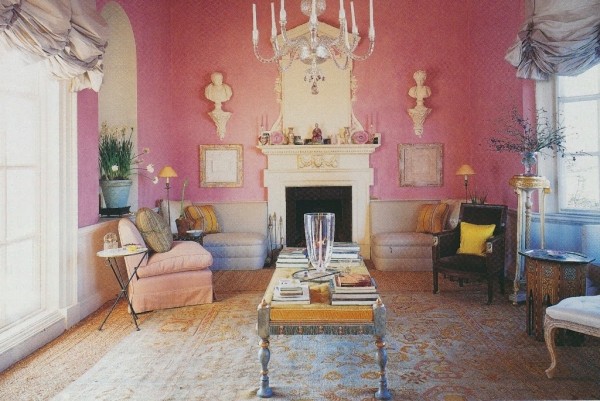 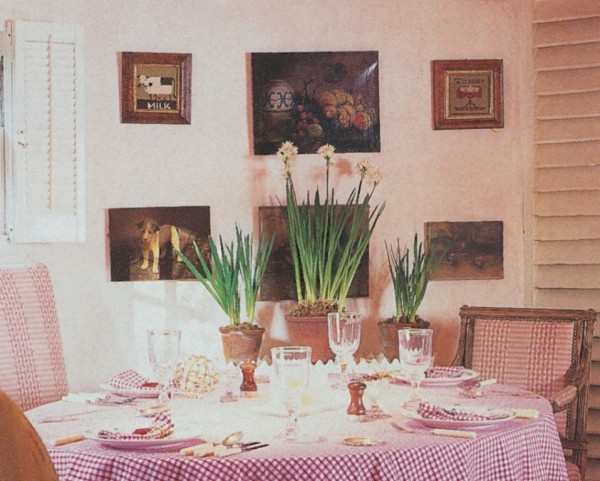 With Veere Grenney’s redecoration of The Temple he introduced strong color into the saloon with a nod to his one-time mentor and employer, David Hicks. I discovered these photos from the The Peak of Chic blogspot, which you can link to at the end of this post. The powerful pink of the saloon’s walls reminds me of Hicks’ most modern of rooms he designed at Britwell House, a drawing room intended for entertaining. Here we are witness to Grenney’s evolution from pure classical design to his present classical-modern mix. In the saloon – far more theatrical than its previous incarnation – simplicity was traded for doses of romantic glamour and a fusion of styles reminiscent of Cecil Beaton’s country house, Reddish House, and London flat. Whether you prefer the sunny disposition of its previous state or the daring of this transition, the wonderful quality of paint is that it can be changed. We are also witness to his love of combining pink with yellow, as did John Fowler, and the evolution of this favorite color combo  – from this version of the saloon at The Temple to his previous London flat along the Thames, to the current state of the saloon at The Temple oft photographed. 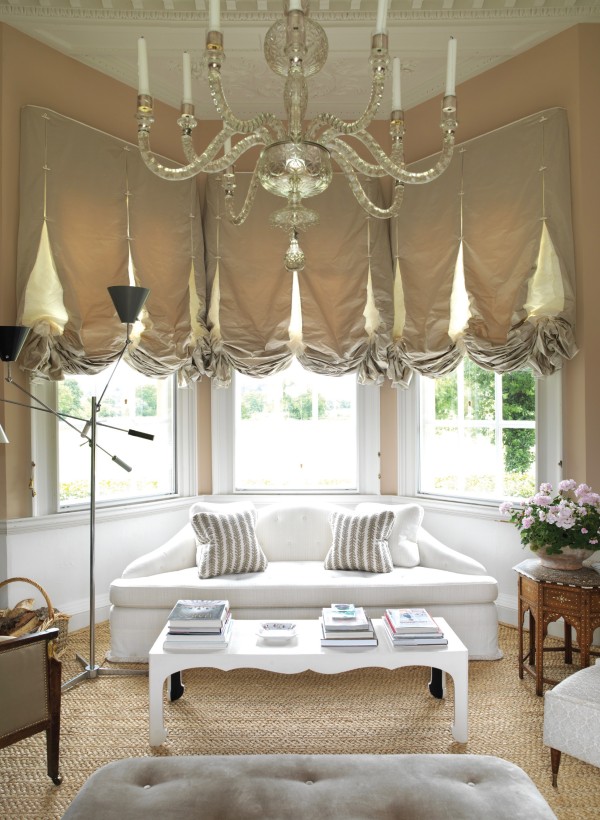 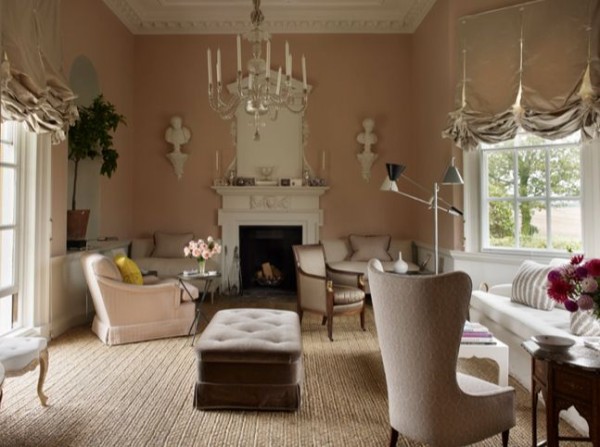 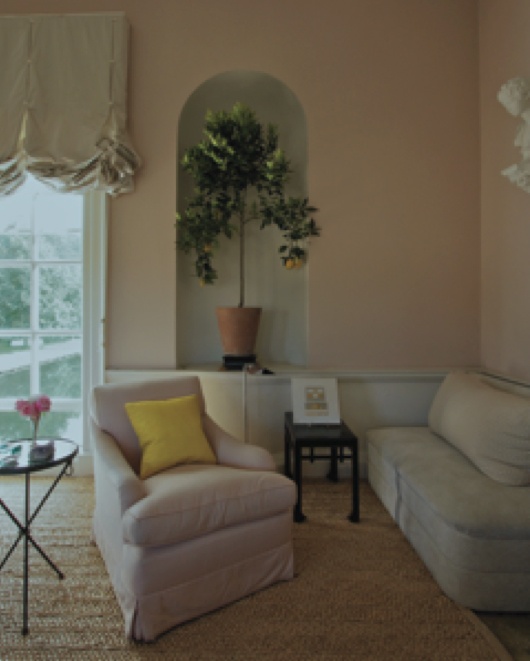 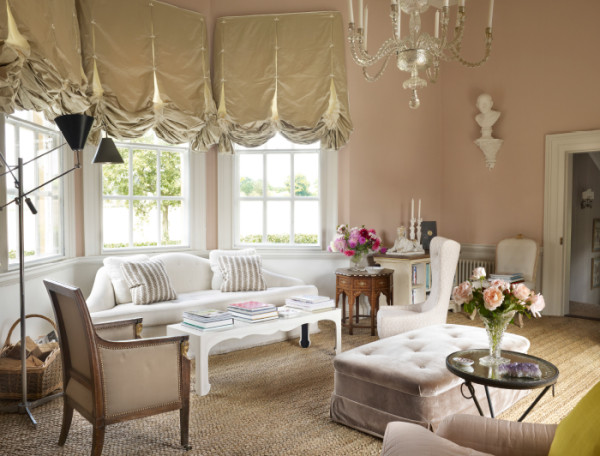 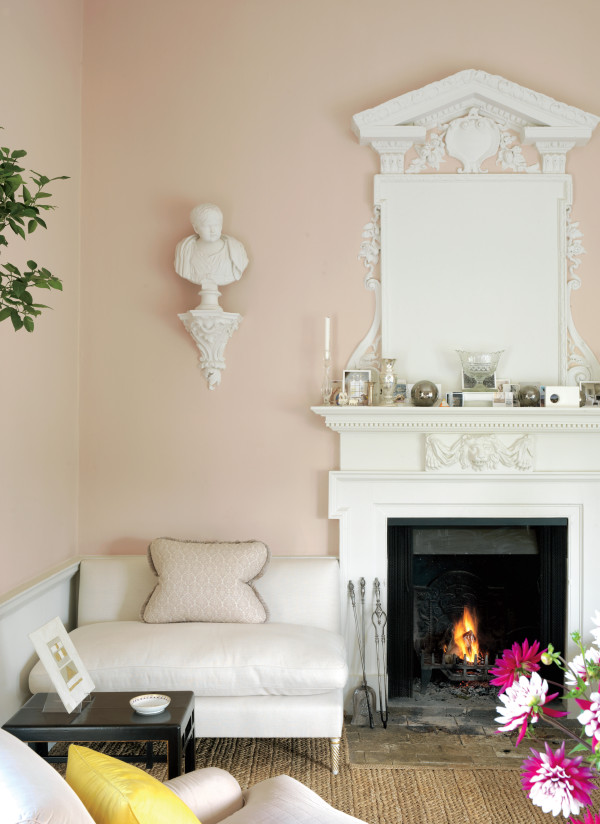 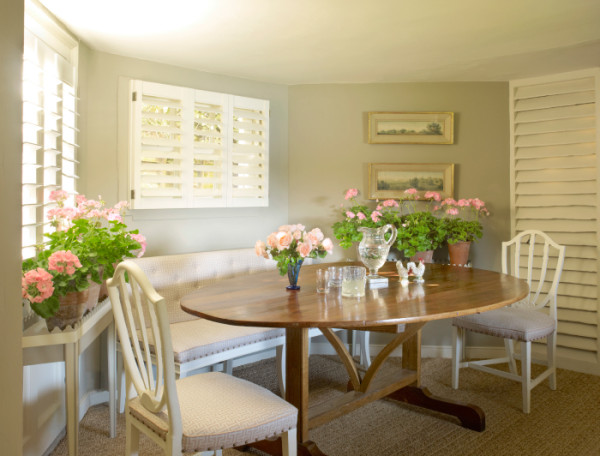 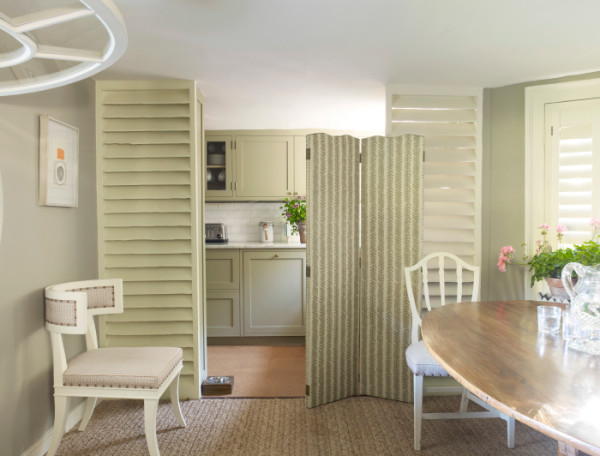 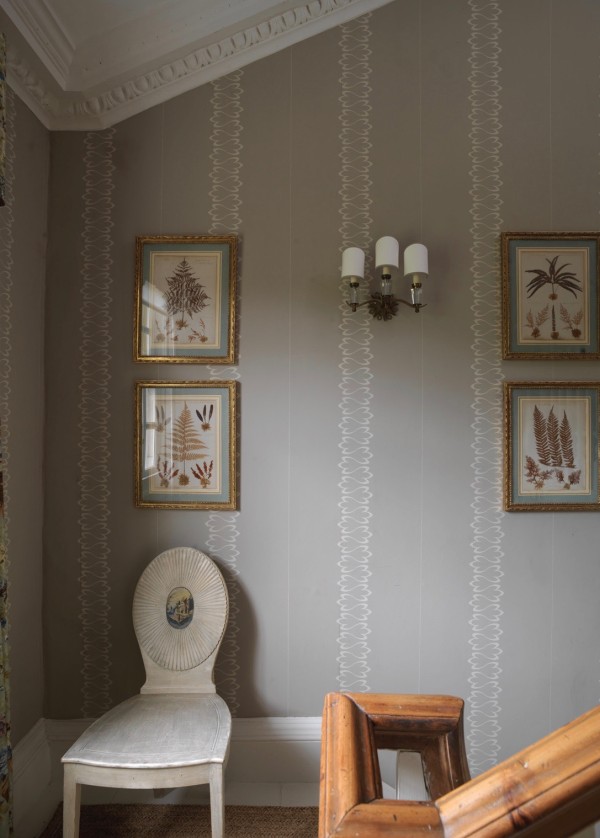 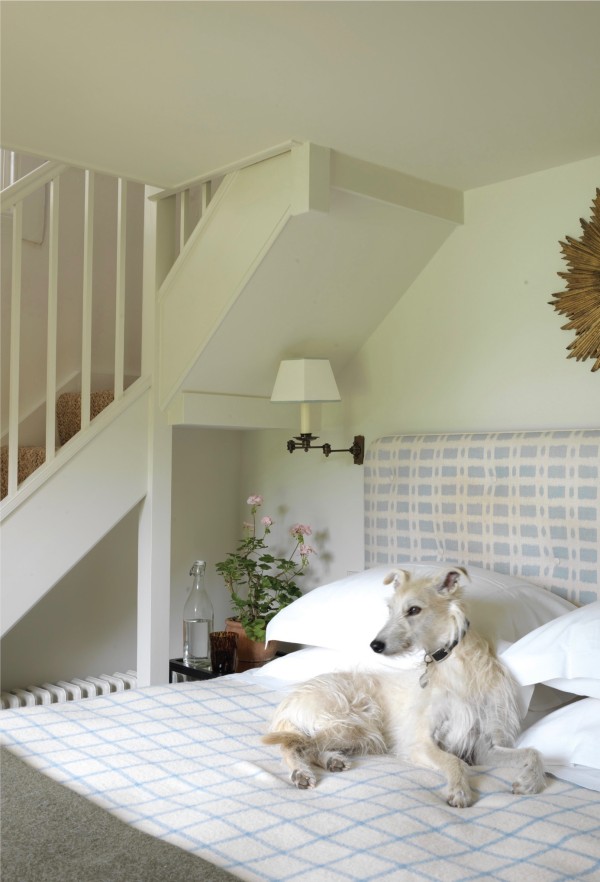 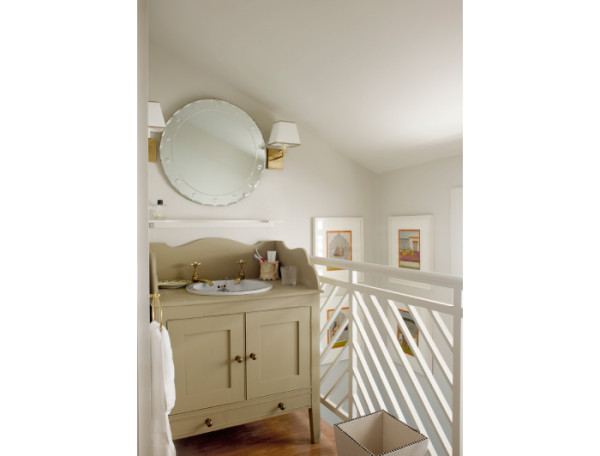 Ever since photographs of Grenney’s third known reincarnation of the rooms at The Temple were published they took the interior design world by storm. It appears he had hit his mark. A fine balance between elegance and country comfort, simplicity and glamour, and subtly and exuberance were achieved. Perhaps the largest contributing factor to its success lies in the dusky pink color of the saloon’s walls, formulated by his partner David Oliver who is the design director for the Paint and Paper Library in London. To this flattering shade of pink Grenney added shades of gray tinged with green, as well as white to pull out the plasterwork. While it can be said there is more flatness in the distribution of color and contrast and, with particular regard to the saloon, more solid upholstered furniture and less antique furniture, there is a spare elegance that allows both the exuberant architectural details of the saloon to shine and the compact sizes of the kitchen-dining and bedrooms to breathe. His new rooms bring us into the present while honoring the past with their mix of 18th-and-19th-century antiques, mid-century modern accents and custom tailored upholstery designed by Grenney using his line of fabrics. I couldn’t imagine living in a recreation of the past for the sake of honoring what has come before. No, I much prefer living amongst those things I love and cherish, which change with time. I wonder what Mr. Grenney has up his sleeves next? 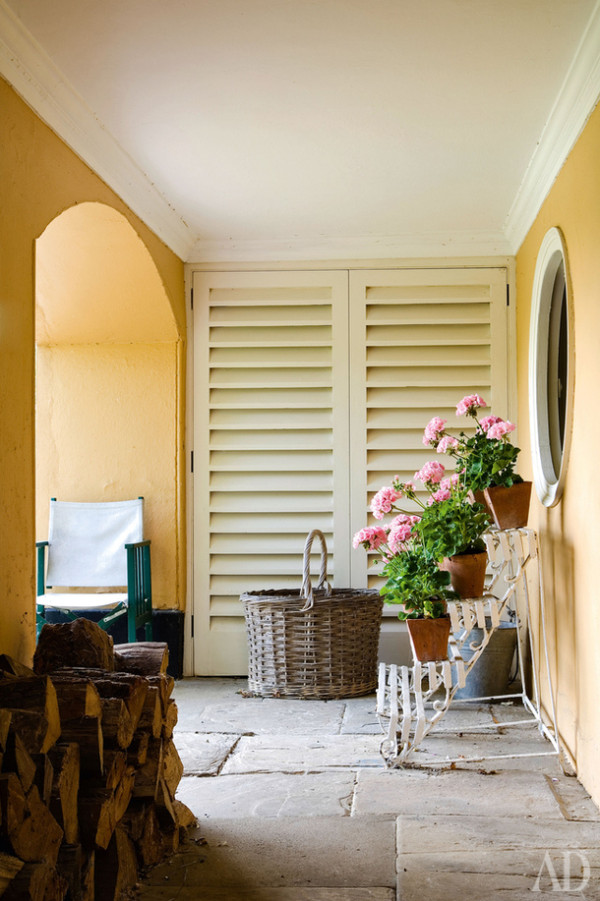 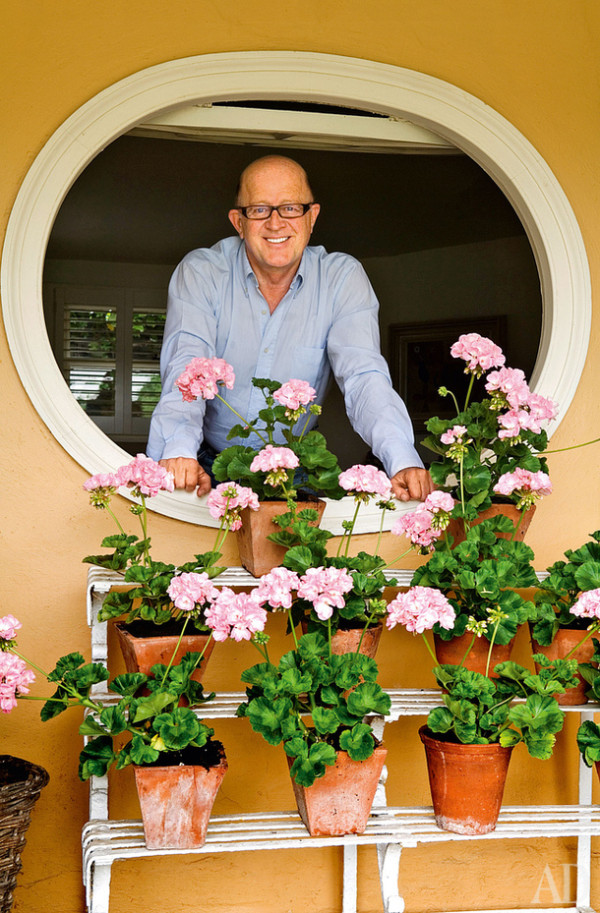 In addition to the sources listed in the above article you can read more on The Temple in The Blue Remembered Hills feature “Indeed”, Ben Pentreath’s “You Can’t Judge a Book by Its Cover”, The Peak of Chic’s “Veere Grenney’s Folly”,  and Hamish Bowles’ feature for Vogue, An English Weekend: Part I.

5 Responses to The Temple of the Four Seasons