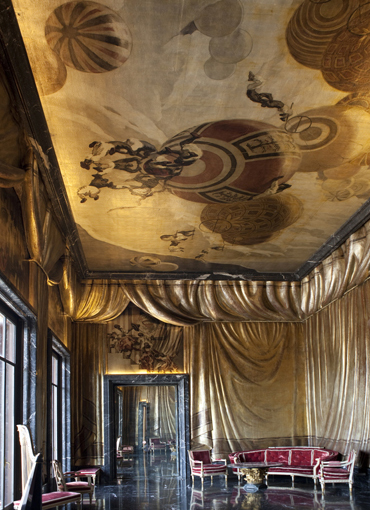 It wasn’t until recently, over a vacation on Mallorca, that I came to fully appreciate the genius that was Josep Maria Sert, a decorative painter from Barcelona (1874-1945) renown for his extravagant Baroque murals commissioned for the decoration of public and private buildings. His talent was in such demand that he traveled the world, completing mural scenes that remain today in the Cathedral of Vic in Barcelona, the Hall of Chronicles in the House of the City in Barcelona, the palace of Errázuriz in Buenos Aires, the Salle de Bal at l’Hôtel de Wendel in Paris, the ballroom of New York’s Waldorf Astoria, the lobby of Rockefeller Center and, my favorite of his projects, the music room in the palace of Bartolomé March on Mallorca. And then, by chance, I discovered in the German edition of Architectural Digest the Maria Sert clad Paris salon of Jean-Claude Binoche, partner of the auction firm Binoche et Giquello. Executed in a limited palette of inky grisaille and sepia, Sert’s epic murals summoned the power and might of mythological gods onto mortals in their quest to wreck dominion over the world, as well as provide fantastical and purely decorative scenic backdrops for private spaces that delight the eye and stir the intellect. 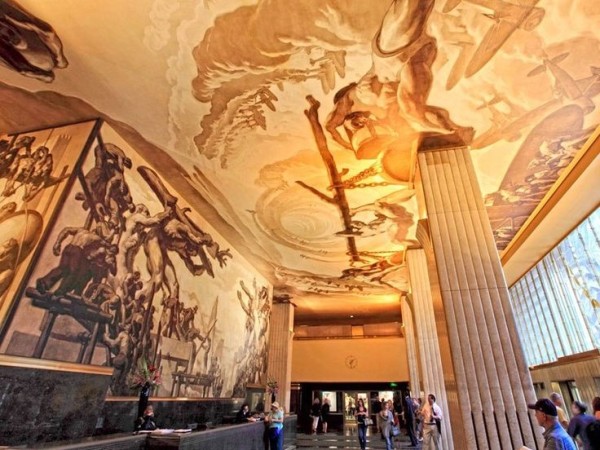 In 1932 Nelson Rockefeller commissioned artist Diego Rivera to create a mural, which the artist titled Man at the Crossroads, in the central lobby at 30 Rockefeller Center in New York City. Unaware that Rivera’s sketches included sections featuring Moscow mayday scenes and the figure of Lenin, upon viewing the mural Rockefeller objected but the artist refused to compromise. As any respectable titan of industry would do, Rockefeller had the entire mural papered over and subsequently contracted with Josep Maria Sert in 1937 to create the existing mural, American Progress – which depicts the development of America through the unity of brain and brawn. The three Graces symbolize man’s intellectual activity, while Titans and men working represent men of action. Abraham Lincoln, Ralph Waldo Emerson and the Center’s skyscrapers also play prominent roles. 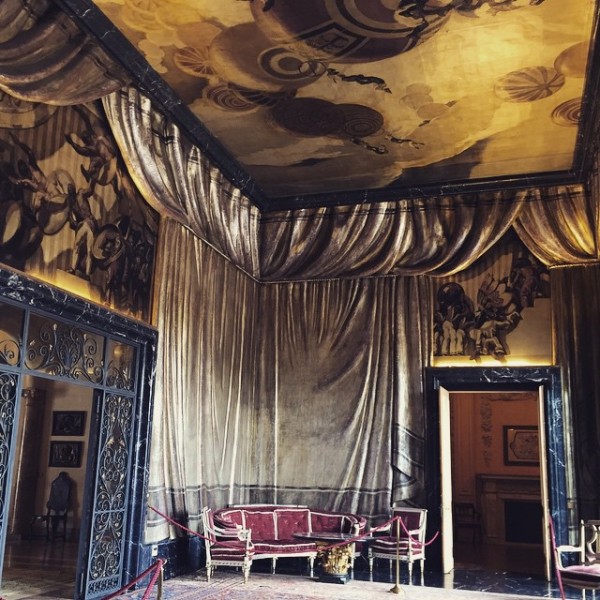 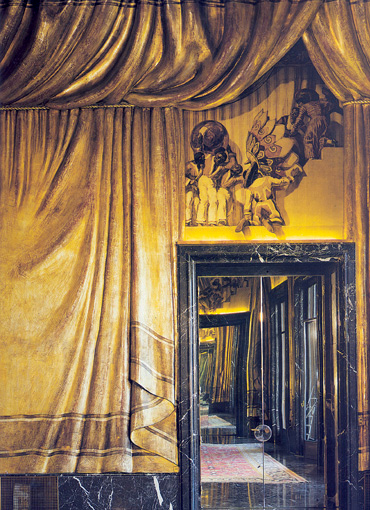 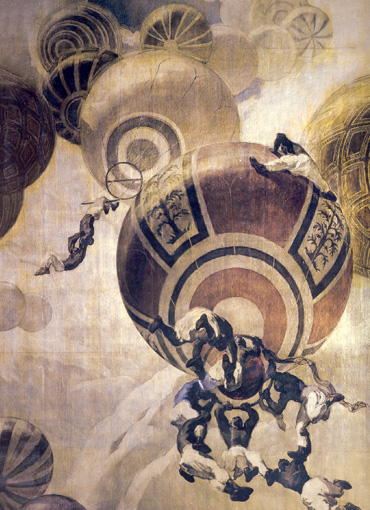 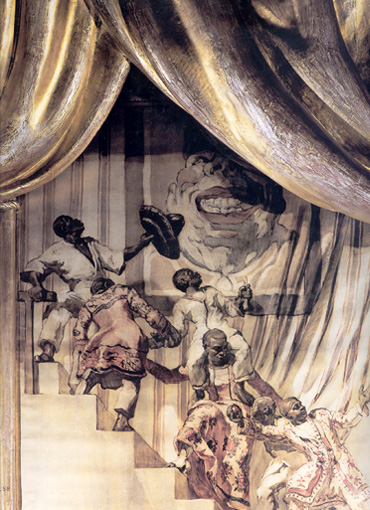 For the music room in Bartolomé March’s Mallorcan palace built by his father, Juan March Ordinas, the founder of Banca March, Sert created extraordinary plaster trompe l’oeil decoration imitating swagged curtains inset with murals depicting circus performers, and a ceiling of hot air balloons adrift overhead. The shimmering metallic of the surfaces and the elegant, restrained palette decorating the extroverted Baroque of the elaborate plaster trompe l’oeil swagged and flowing curtains is pure fantasy. Imagine an evening spent here, classical music playing and candlelight flickering over this magical scene. It is rare in today’s world to experience this depth of atmosphere and pure sensory delight. 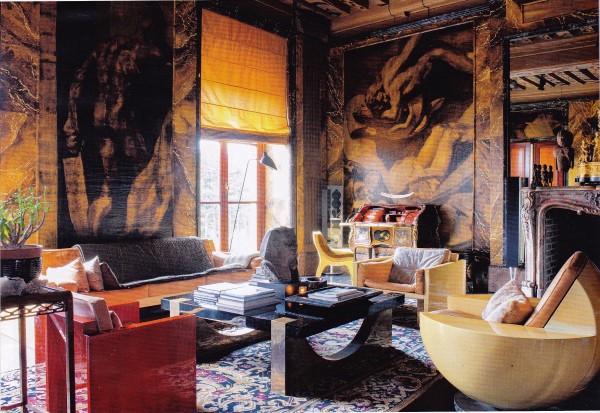 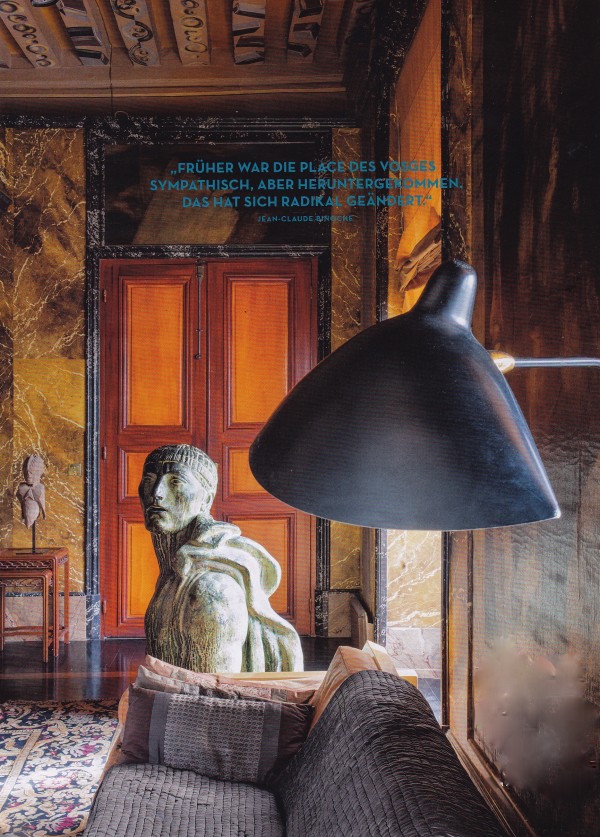 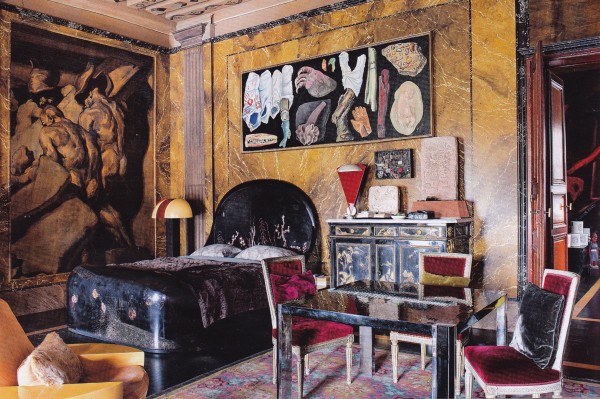 I discovered Jean-Claude Binoche and his Paris apartment on the Place des Vosges while flipping through a complimentary issue of German AD provided by Hotel Hospes Maricel while vacationing on Mallorca. Intrigued by this French antiquaire and partner in the auction house Binoche et Giquello, and his compendium of furniture and decorative arts that seems to cross all periods and styles, I was most drawn to the atmospheric murals covering the walls of his salon, which also functions as a guest room. I lived in the Netherlands long enough to understand some Dutch; translating German, however, proved too ambitious. Unfortunately, not much is reported regarding the murals other than for credit given to Sert. Perhaps they are additional murals created for Rockefeller Center that were never hung or, most probably, studies for them. They provide a bold and interesting backdrop for Binoche’s mix of mod and muscular Italian furniture, elegant Louis XV and XVI furniture, chinoiserie cabinets and pre-Columbian art. Even a japanned Art Nouveau bed found its way into a corner of the room. A modernist’s wunderkammer, to be certain, I rather delight at its bravado and sense of the unexpected. Certainly, were I owner of an auction house I could certainly indulge every whimsy as things come and things go.

Photos of Palau March, other than my own, are from the Fundación Bartolomé March; Photo of Rockefeller Center via Pinterest; Photos of Jean-Claude Binoche’s Paris apartment by Guillaume de Laubier, featured in the May 2015 issue of German AD.