If not for a photo of the somewhat humble and rustic facade of this charming house in a Swiss village one might assume from the photos below that the rooms contained within belong to a château in the French countryside. An admitted nature-phobe, Frédéric Méchiche has no interest in bringing the natural splendor of the outdoors indoors: “All this green stuff, you know – trees, leaves, buttercups and flowers. No thanks, not for me.” But he made a concession for friends owning this 18th-century mountain home set in a rural landscape, transforming it into a sophisticated manor house fit for a Francophile. In derelict state when purchased with insensitive and unsightly transformations made over the years, Méchiche renovated the interiors from the ground up, revealing the dwelling’s original flagstone floors and honey-colored stone in some areas and installing antique stone floors with cabochons from Burgundy, parquet de Versailles, and gilt Louis XVI boiserie in others.

If the rooms appear familiar they should. They were featured in The World of Interiors until resurfacing recently in the Russian publication of Architectural Digest. Without prior knowledge identifying their creator is not difficult either: simply search out neoclassical architectural details and furniture with a penchant for the Directoire, a coolly elegant monochromatic scheme of cream and gray, striped fabrics and an occasional nod to modernism in the form of a black-and-white photograph or Giacometti sculpture. The results produce an atmosphere of noble antiquity  through the lens of a modern eye – elegant, restrained and timeless. 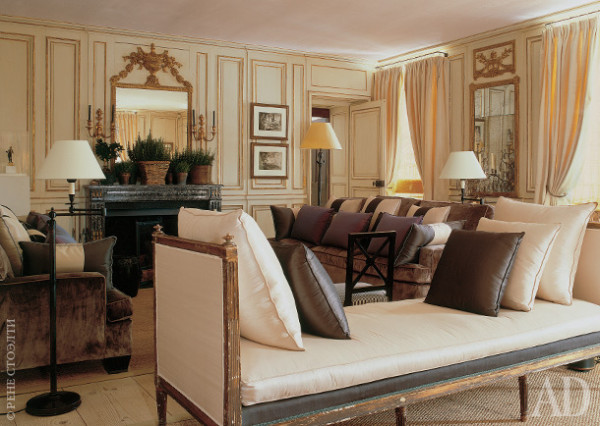 Méchiche created space and light in the living room with mirrors hung on Louis XVI cream-and-gilt boiserie, echoed in the Louis XVI sofa of the same palette. It appears Méchiche also conceded to allow natural foliage in the form of rosemary to adorn the Louis XVI mantel. 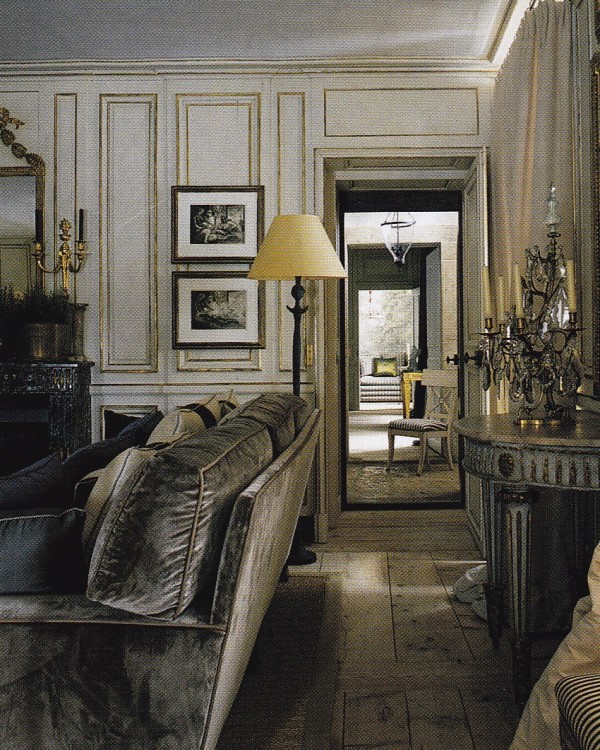 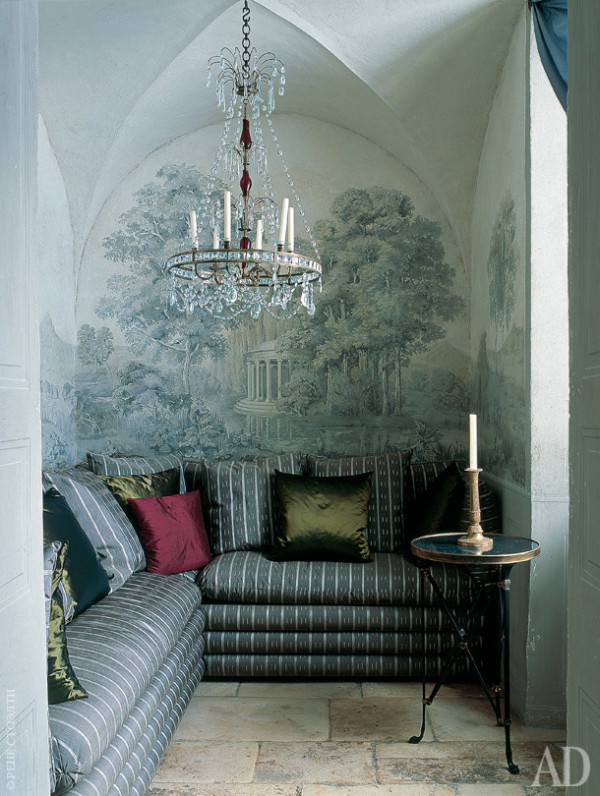 An intimate bijoux sitting room – my favorite room in the house – has trompe l’oeil walls painted to resemble grisaille wallpaper. The chandelier is early 19th-century Swedish.

Méchiche created a library out of a series of attic rooms, installing an 18th-century staircase and furnishing it with suede sofas and a Swedish chandelier. 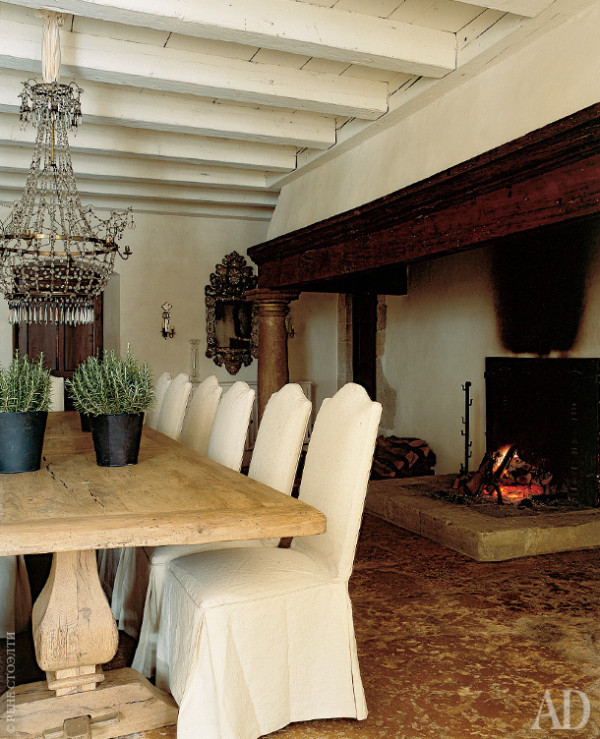 The most rustic room in the house, the “trophy room”, features a monumental 17th-century refectory table and baronial walk-in fireplace.

The spirit of a Swedish country house pervades the kitchen’s dining area, punctuated by a neoclassical-style Alsatian stove from the 19th-century. 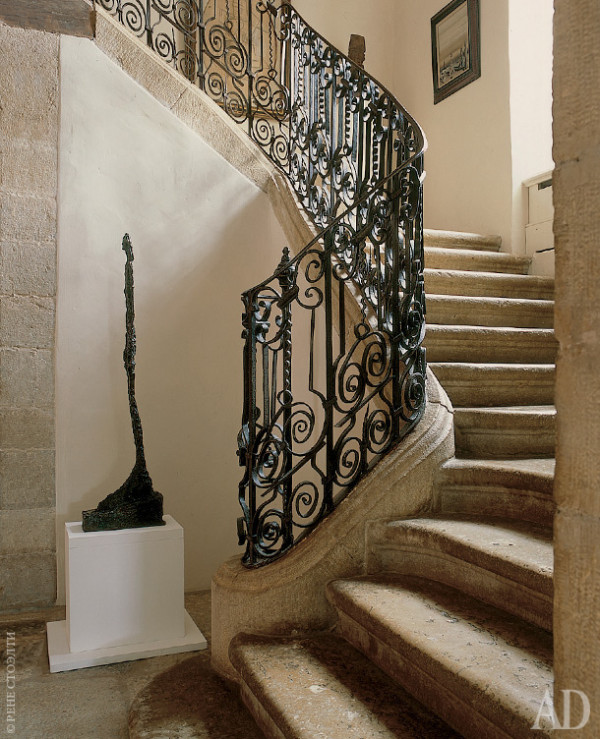 A Giacometti sculpture greets visitors in the stair hall, where Méchiche installed a wrought iron railing. 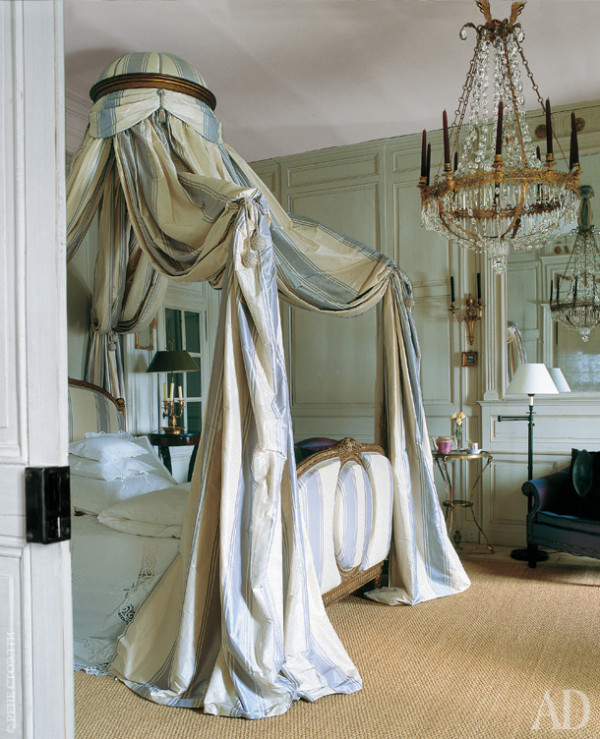 Méchiche had the insides of the silk curtains draping the Louis XVI lit á la polonaise in “Madame’s bedroom” hand-embroidered with sprigs of flowers taken from the design of an 18th-century waistcoat. 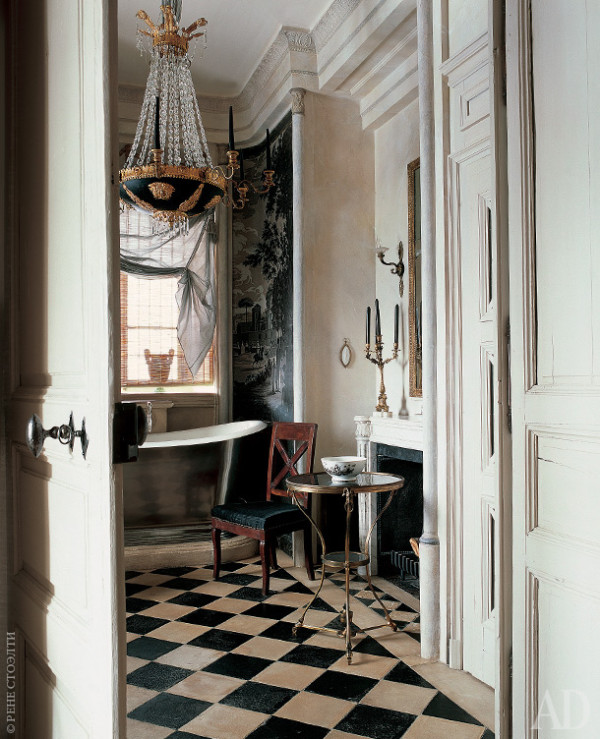 2 Responses to A Lasting Impression