With all the news of record snowfall and plummeting temperatures across the Eastern board an exotic getaway sounds very enticing. And what could be more exotic than the late Yves Saint Laurent and Pierre Bergé’s Russian folly at Château Gabriel overlooking the coast of Deauville in France? Granted, the weather on the coast of Normandy this time of year is blistery. But let us agree, for imagination’s sake, that there couldn’t be a more enticing winter respite! After all, the publication of their folly first appeared in the January, 1990, issue of House & Garden.

Following their purchase of the main house, Château Gabriel, in 1983 the partners called on long-time friend interior designer Jacques Grange to create a fantasy for living. While the main house was modeled after the rooms and characters from Marcel Proust’s In Search of Lost Time the design of this particular outbuilding was inspired by the design duo’s trip to Russia for a retrospective exhibition of YSL fashions in 1986. Based on the traditional Russian dacha, or vacation home, Grange designed their folly based on the 19th-century country cottage of Ludwig II of Bavaria. Constructed of unpainted pinewood around eight Moroccan-style stained glass windows with a steeply pitched roof and lacily carved extended eaves supported by pillars crowned by arched timber, their realization of a dream is set within a birch grove world’s away from their then frenetic life in Paris. 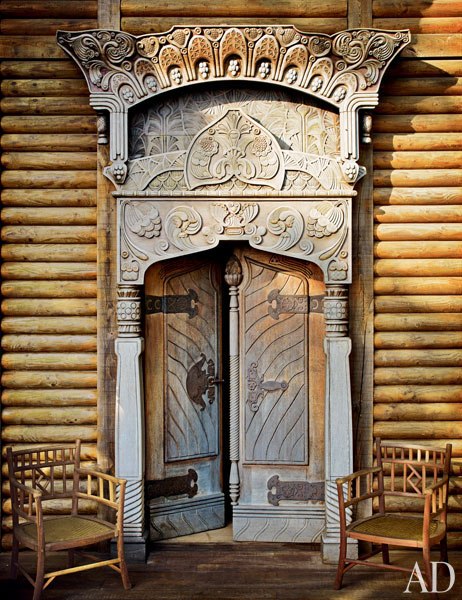 A ceremonial and flamboyantly carved Russian Art Nouveau doorcase from the late 19th-century frames the dacha’s main entrance. They were commissioned by a Russian princess devoted to reviving the Boyer style, having them carved in the village of Talachkino near Leningrad. 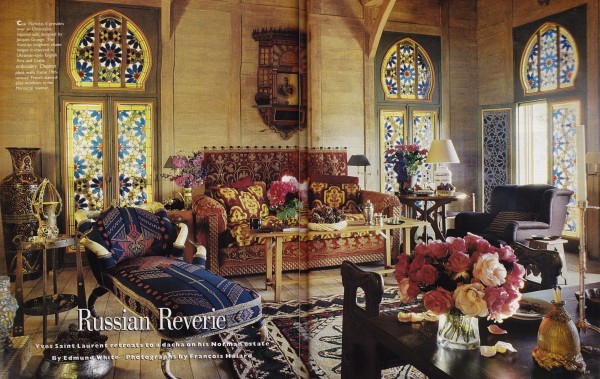 The interiors were inspired in part by the sets in the 1930’s movie The Scarlett Empress by Josef von Sternberg, staring Marlene Dietrich. The eight French-designed Moroccan-style stained glass windows set into chestnut planks were the starting point for the exuberant layering of pattern and color, and their passion for Orientalism. A polychrome panel of Czar Nicholas II presides over an Orientalist sofa designed by Grange. The Austrian longhorn chaise longue is covered in Ukranian-style English Arts & Crafts embroidery. As in all their homes tables are piled with collections and books, and the air scented with fragrant flowers.

A writing table was dedicated to one side of the room for Saint Laurent to draw at. Above it hangs a Belgian Art Nouveau chandelier by Serurier-Bovy; the bench is Danish and the armoire is 18th-century Provencal.

Their Russian-style dacha appeared again in the pages of House & Garden in 2005, offering a more expansive view of the main living area featuring a 19th-century French Orientalist-style mantel and mirror and a 19th-century Russian carpet. 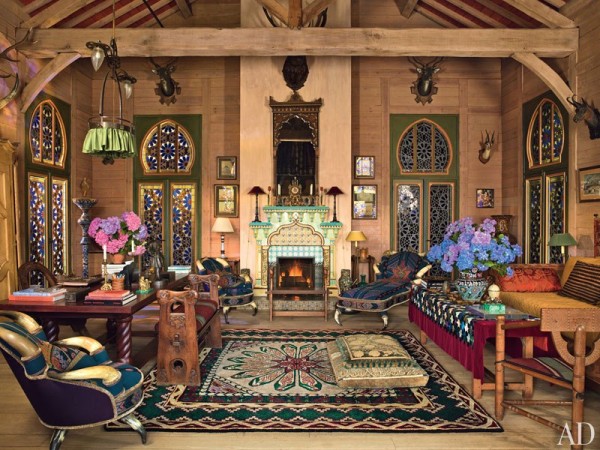 A photo of the main salon published in Architectural Digest following the death of Yves Saint Laurent in 2009 reveals nothing had changed but the flowers. 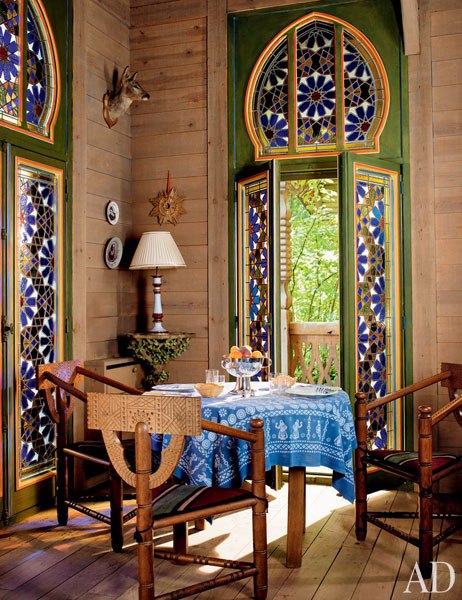 In one corner of the salon is a dining area with circa-1900 Russian chairs made at the Talachkino workshops. 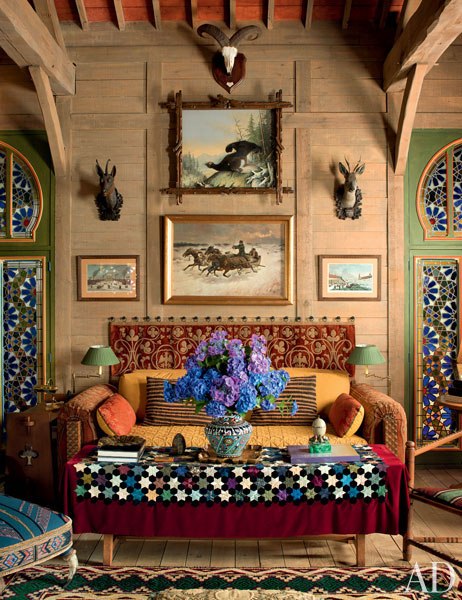 Russian and French genre paintings surmount a 19th-century textile that hangs behind the sofa, and a velvet-edged quilt drapes the cocktail table. 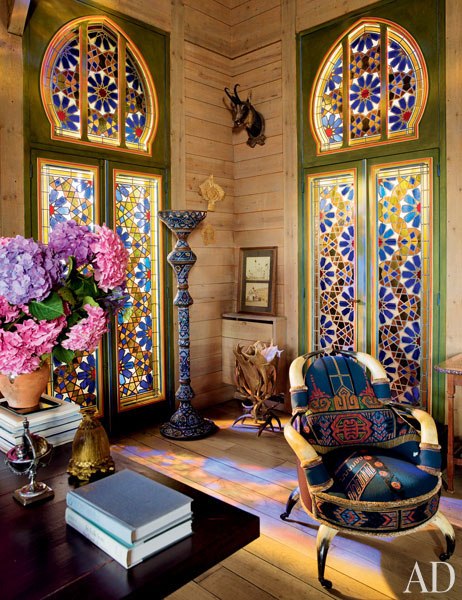 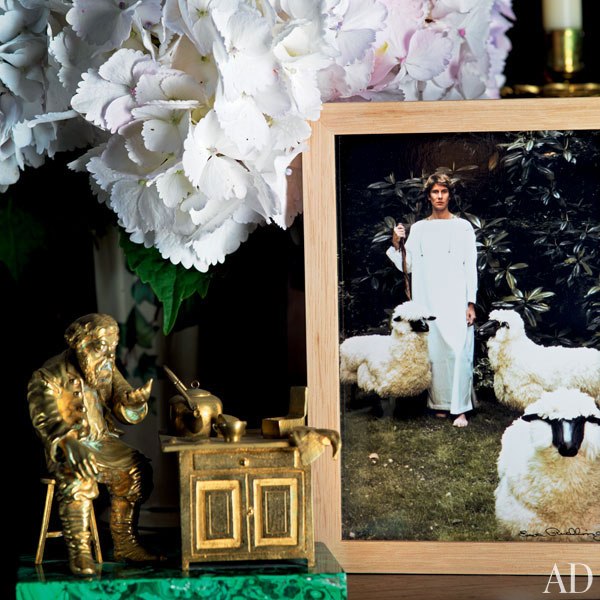 A 19th-century Russian paperweight is paired with a photograph of Saint Laurent standing amid a flock of François-Xavier Lalanne sheep sculptures. 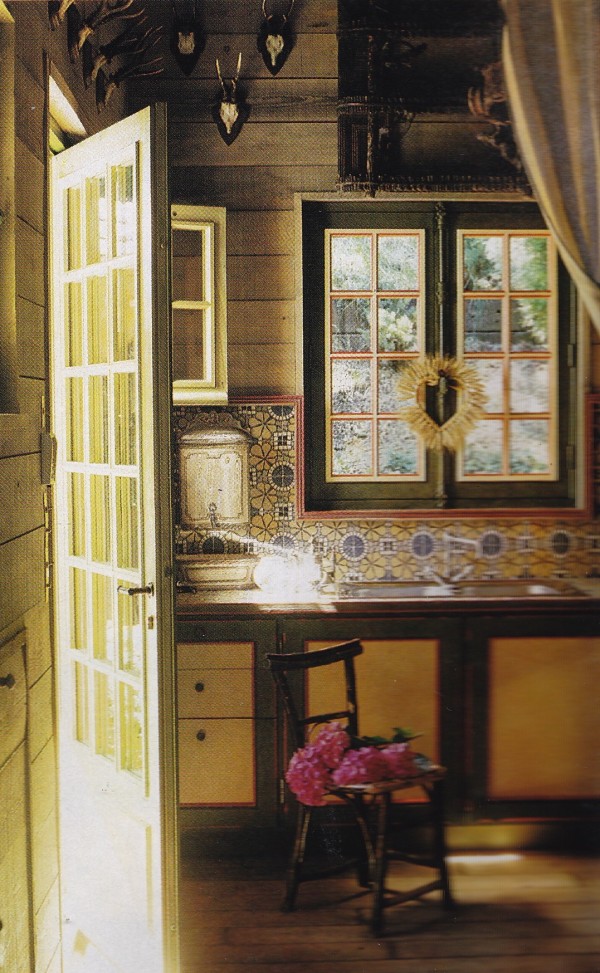 A recent photo of the kitchen features a 19th-century Eastern European light fixture, a ceramic topped garden table and a La Cornue range and hood. 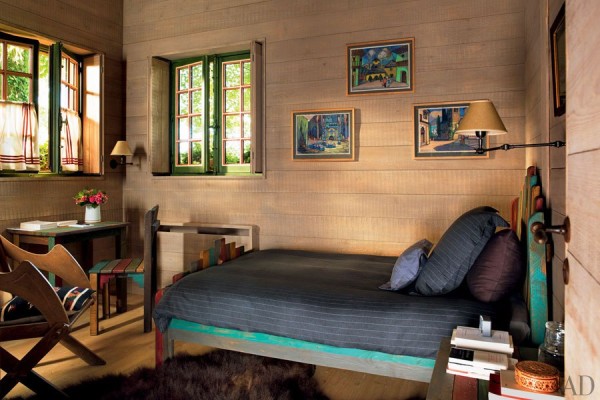 In the sleeping annex, Bergé’s room includes a colorful custom-made painted bed, desk, and chair that compliment the early-20th-century Russian set designs displayed on a wall. The hall chair at left is 19th-century Swedish, and a brown-bear pelt softens the plank floor. 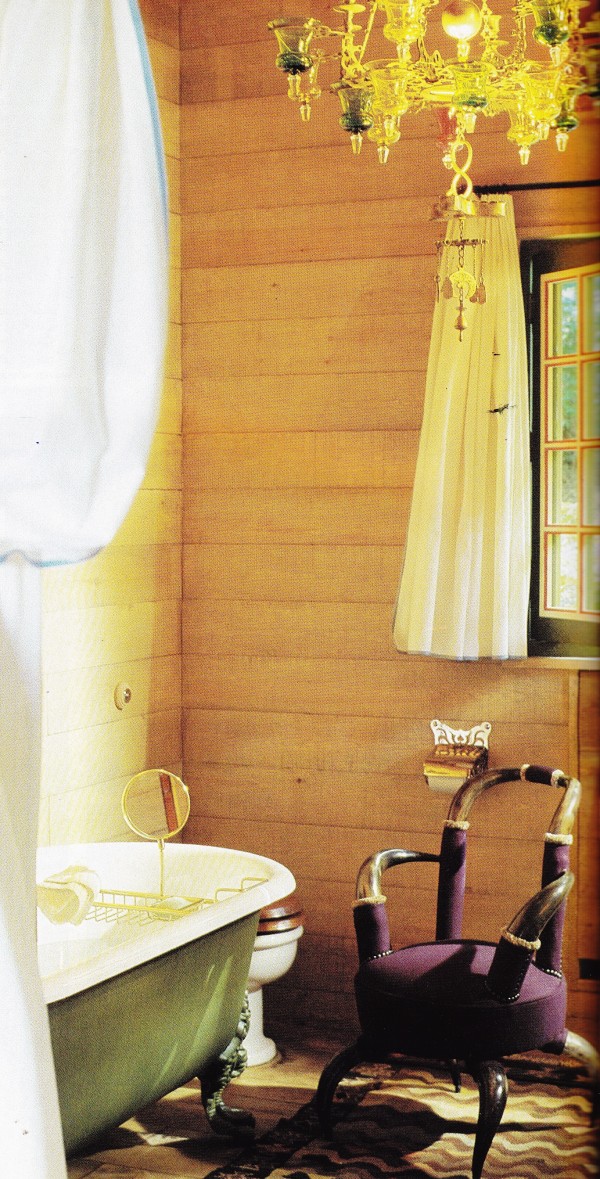 An Austrian chair fashioned from hunter’s trophy horns stands beneath a 19th-century Turkish chandelier in the bathroom. 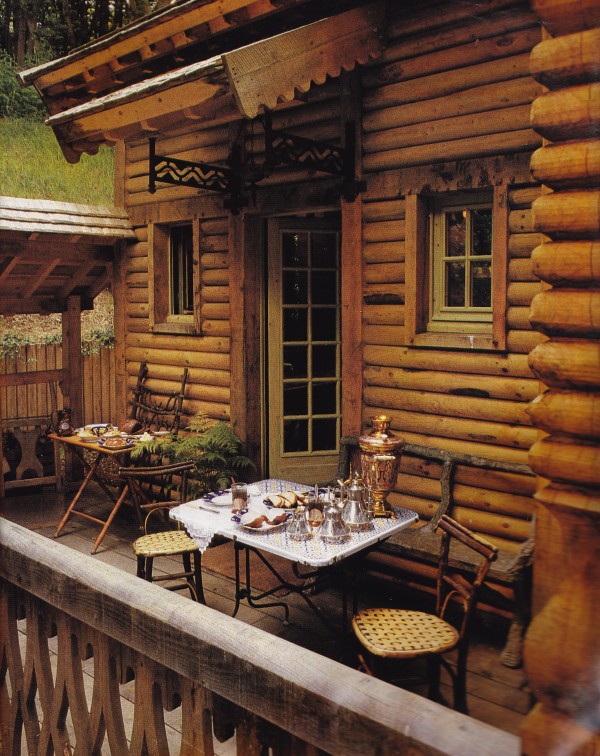 A side porch is arranged for serving tea as featured in the 1990 issue of House & Garden. The brass and enamel samovar on the same table later photographed in the kitchen was given to Saint Laurent by Raisa Gorbachev. Tea is served á la russe in glasses with silver holders. 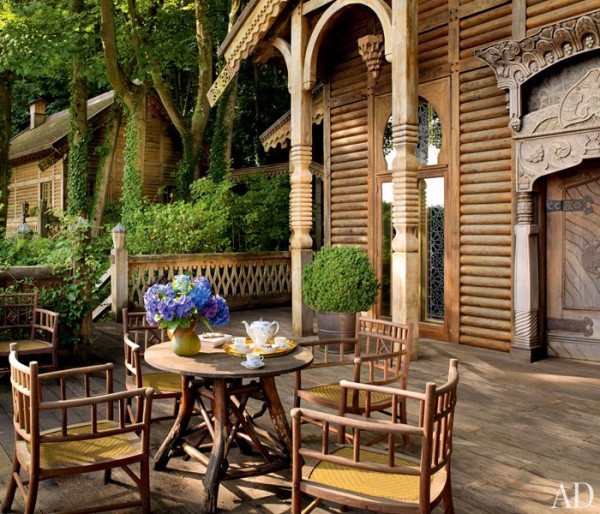 Landscape designer and longtime friend Madison Cox furnished the dacha’s terrace with custom-made teak armchairs. The building in the background is the sleeping annex, which contains the master bedroom and a guest suite. 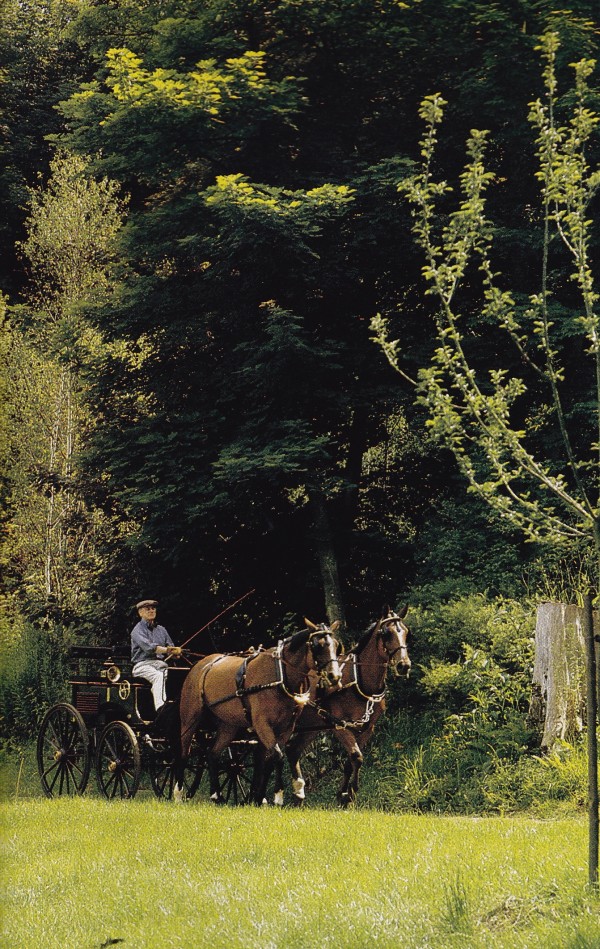 Pierre Bergé, riding through the forest that hides the dacha from the main house, is pure Chekhovian. 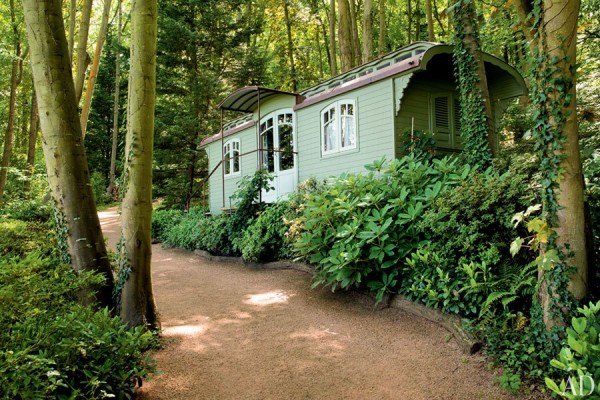 Another outbuilding on the property is a Romany caravan that Jacques Grange transformed into a tidy guesthouse. 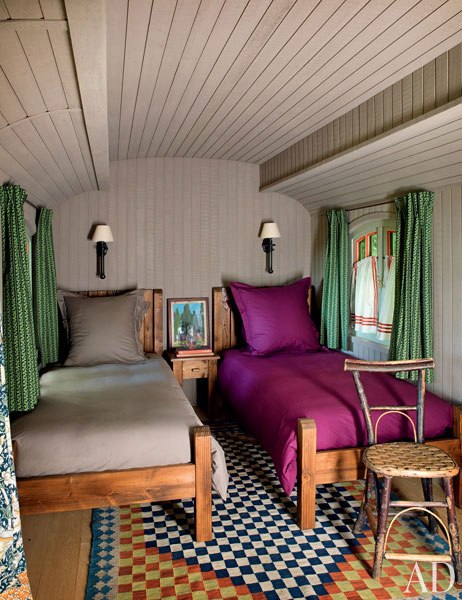 Inside the caravan’s guest room custom-made pine beds stand on a checked kilim, and the green curtains are made from an antique William Morris fabric.

Following the death of Yves Saint Laurent the Saint Laurent-Pierre Bergé collection of art and antiques from Château Gabriel went on the auction block at Christie’s in Paris on November 17th and 18th of the same year. Though Bergé elected to sell main house he kept their Russian folly in the forest for his own use and, perhaps, to relive countless magical moments spent there.