A Man and His Houses, Part III 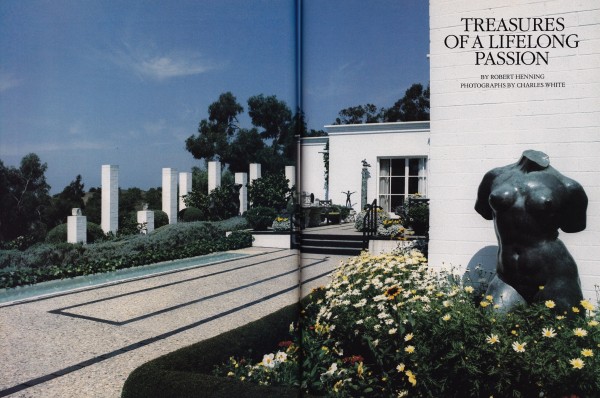 “October Hill” was collector and art patron Wright Ludington’s third and final home in Montecito. After moving to California in 1915 to attend the Tatcher School in Ojai he would make Montecito, California, his home, eventually inheriting his father’s Spanish-Colonial-style villa in 1926 at the age of 27, which he renamed Val Verde (see A Man and His Houses, Part I). In 1957 he conceived of a modern Palladian-inspired villa in collaboration with architect Lutah Maria Briggs to better showcase his collection of antiquities and art. This, his second home, he named Hesperides (see A Man and His Houses, Part II). In 1973 Ludington decided to downsize and called once again upon Lutah Maria Briggs to collaborate on an elegantly spare pavilion washed in white. 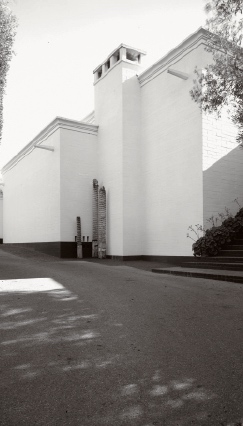 An elegant, spare and private facade defines Hesperides, designed by Lutah Maria Briggs. The down spouts, or canales, were inspired by Mexican architectural prototypes. 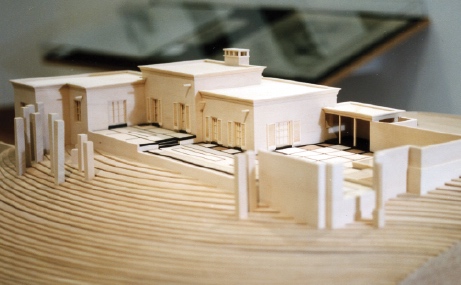 Plain, cubic volumes and a flat roof are merely adorned by a simple cornice in a model created by Briggs based on sketches Ludington provided. The house is sited on a hill and all rooms are oriented around a central terrace providing a transition from house and garden, garden and hillside, opening up to views of sky and sea. The terrace, in the top photo, was planted with lavender, magnolias, boxwood, and evergreens and punctuated with geometric columns of white painted cement. Black painted bricks define the linear layout of the pebble surfaced terrace.

Ever sine I first laid eyes on “October Hill”, and its rooms and collections contained within, it has filled my dreams. Though I have long admired his previous residence, Hesperides, October Hill possessed the romantic predilections of an aesthete and collector. I think, too, the scale and assemblage of his collections into tableaux evolved and became more refined and pleasing to the eye. In his previous villa there tended to be too many diminutive pieces grouped en masse, making it difficult to appreciate any one of them. Here there is an elegance in his ability to curate and edit his varied collections, best showcasing their intrinsic beauty. 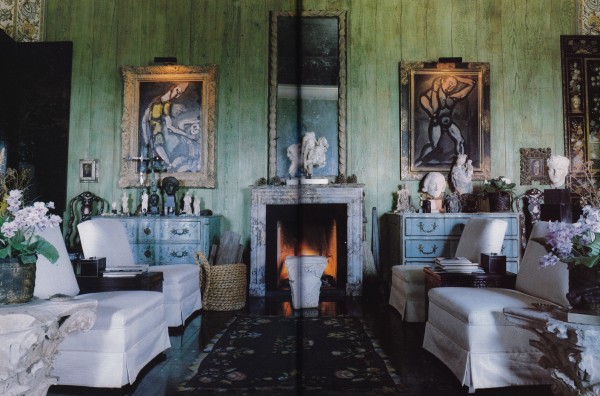 A dreamy, ethereal and coolly dark ambiance informs the cedar plank-lined salon – sanded and painted in successive layers of green and white and rubbed with red glaze and umber – which feels introspective given its restrained materials, color palette and design. Over the Provencal chests hang a pair of Roualts – Clown and Child and Wrestler. The Corinthian capitals used as tables were moved here from the salon at Hesperides. Evocative of a cabinet of curiosities, the rooms which Wright Ludington fashioned for himself at October Hill distill a lifetime’s passion for collecting reminiscent of the 18th-century gentleman amateurs.

Ludington’s unerring eye and intuition achieved what few can accomplish: the perfect marriage of an ideal of the natural and man-made worlds. Here he has grouped three terra-cotta Tanagra figurines, small cycladic figures, a rare Roman torso, Roman glass vials and Sumerian black basalt beads of King Gudea and a priest.

Adjacent walls in the salon are hung with a stylized floral cotton that nicely compliments and contrasts the black terrazzo floors and black painted furniture: an 18th-century chinoiserie Venetian secretary and a Portuguese lacquered chair. A still life by Dunoyer de Segonzac hangs above the secretary. 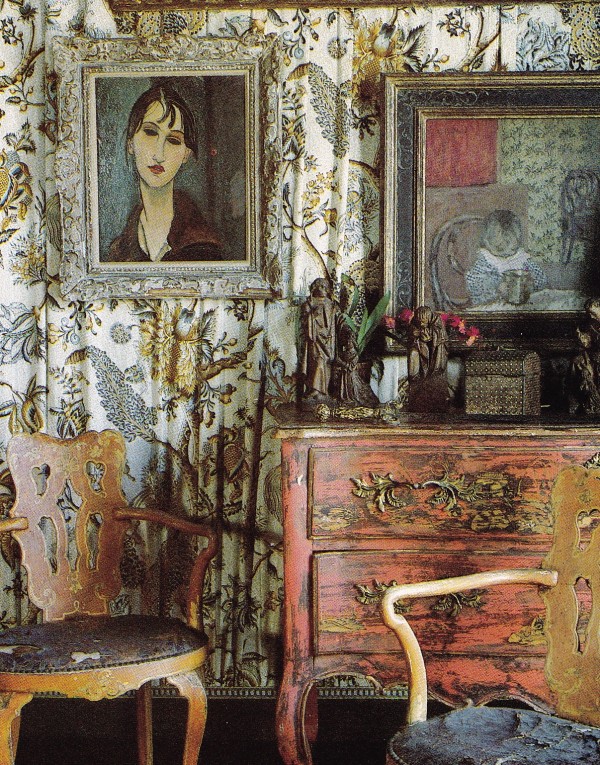 Another vignette in the salon features a portrait by Modigliani and Vuillard’s Interior with Baby above a Portuguese painted chest. The chairs are Italian. 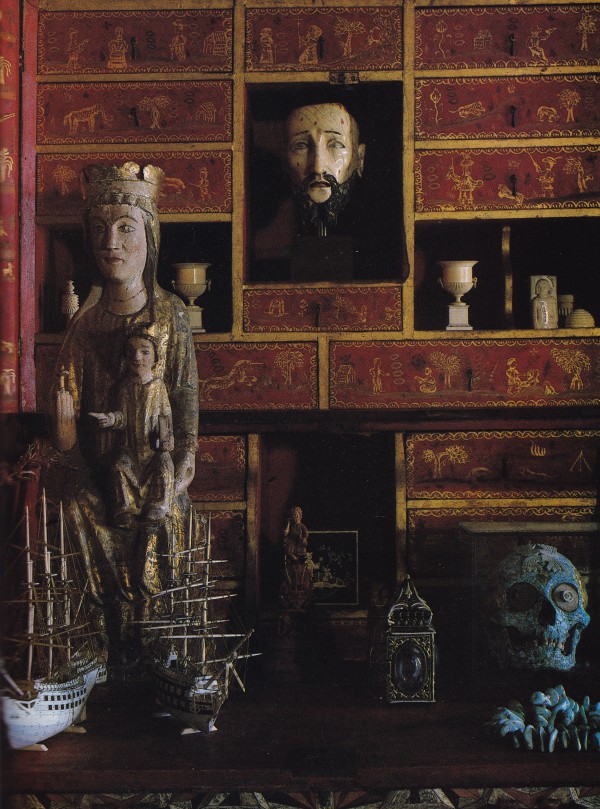 Ludington created an artful still life atop a Portuguese desk, including a late medieval Madonna and Child, a South American ivory head of Christ, a French 18th-century mechanical toy, carved bone sailing ships and a human skull from Mexico encrusted with turquoise and gold. 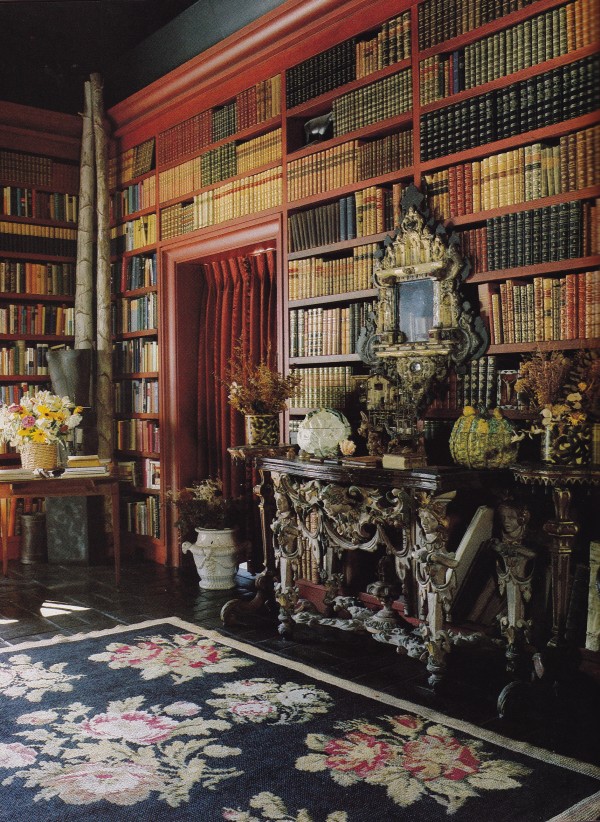 In Ludington’s booklined bedroom and study a Portuguese mirror hangs over an Italian Baroque console that was believed to have been made for a stage set. The dried flowers in cachepots are a sign of their times, but how I would love to remove that saccharine basket of cheerful posies! 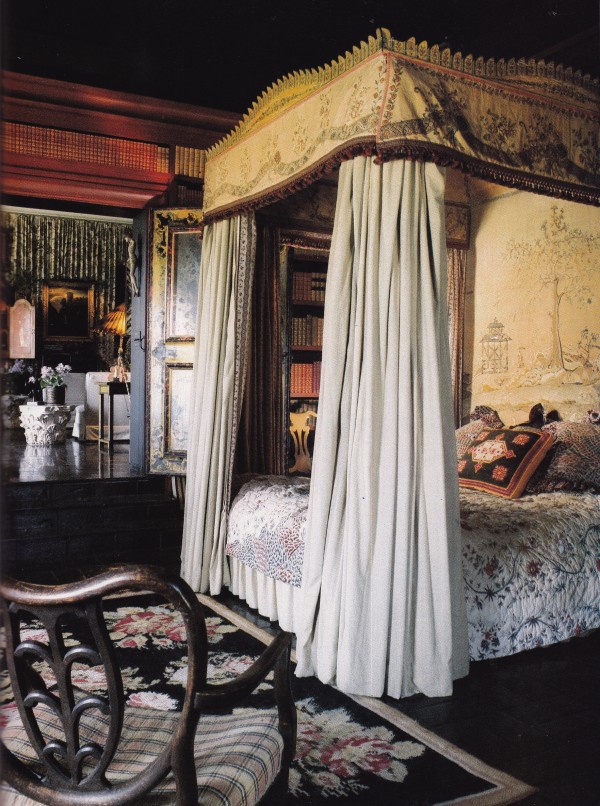 The master suite featured an 18th-century English bed with a variety of embroidered hangings. Through the Venetian doors, which he relocated from Hesperides, is a view toward the salon. 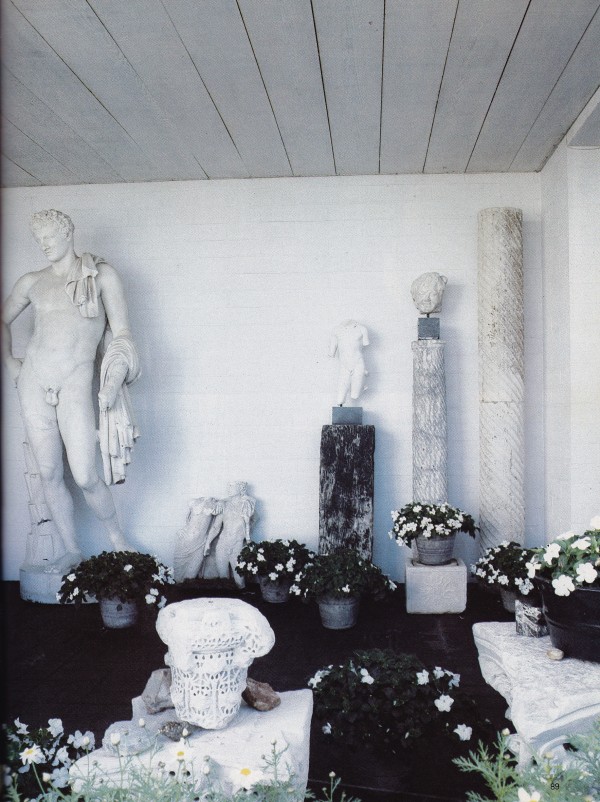 A covered loggia presents an arresting study in black and white, including the larger-than-life Hermes found at Hadrian’s villa at Tivoli, previously a part of the collection at Landsdowne House until acquired by Ludington in the 1920’s. 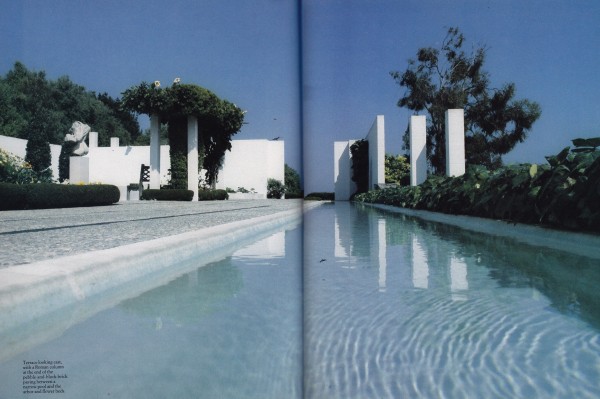 The terrace includes a narrow pool looking toward a Roman column and torso fragment. 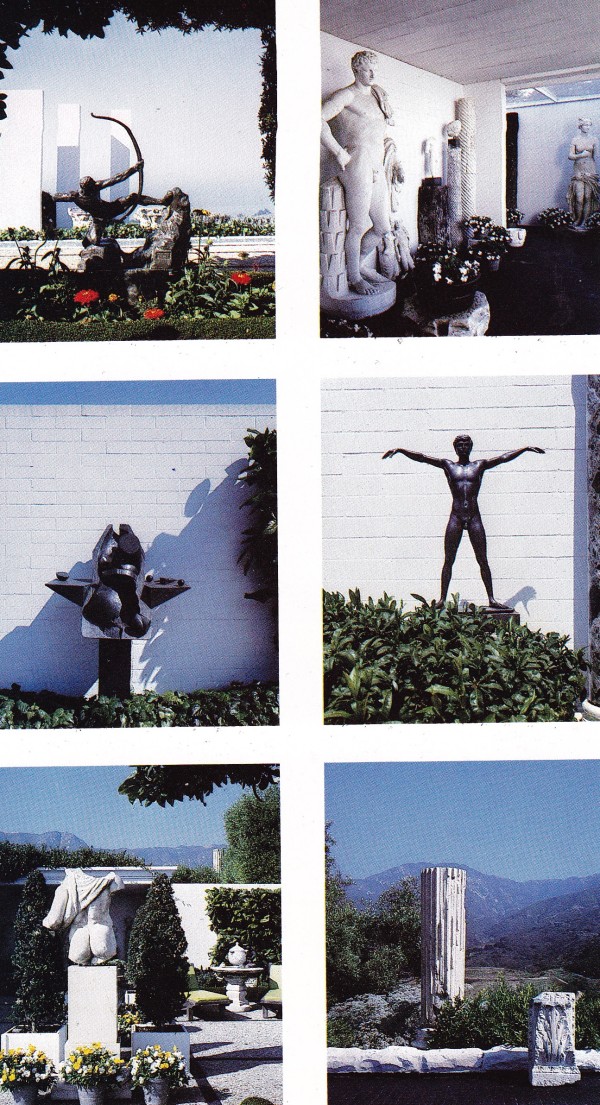 Ludington’s vast collection of Classical and modern statuary and sculpture were integrated into the design of the landscape, creating a virtual Pompeii come to life. 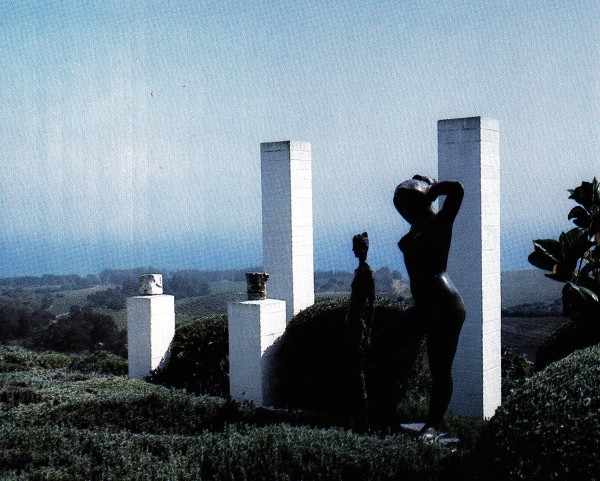 At the age of 91 the great collector and arbiter of taste passed away, in 1992. Here is a copy of an article posted in The Los Angeles Times commemorating his life and times. Much of his collection can now be viewed at The Santa Barbara Museum of Art.

ENTERTAINMENT – The Los Angeles Times
Ludington Bequests to Santa Barbara Museum
October 5, 1992 | SUZANNE MUCHNIC, TIMES ART WRITER
The Santa Barbara Museum of Art has received a donation of 175 works of art from the estate of Wright S. Ludington. The bequest includes oil paintings by major Impressionist and modern artists, modern bronze sculptures, a group of Luristan bronzes and rare Roman sculptures and architectural fragments. A prominent art collector and founding member of the museum, Ludington lived in Santa Barbara from 1927 until his death in May at age 91.

Treasures of a Lifelong Passion written by Robert Henning for House & Garden, March 1983, with photography by Charles White.