A Man and His Houses, Part II 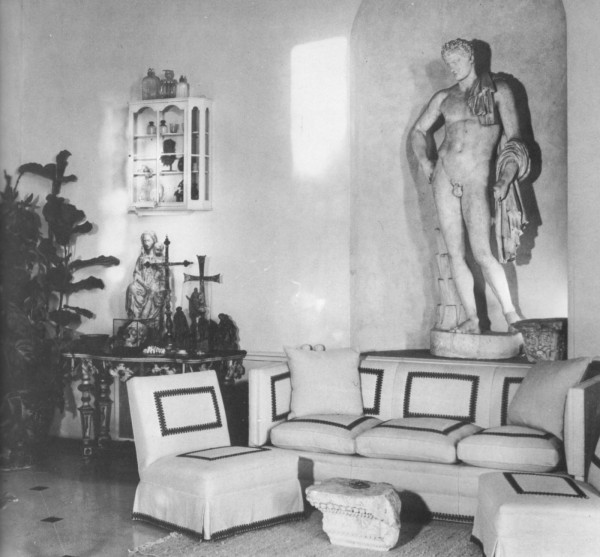 For many years I was under the impression that Wright Ludington’s villas Hesperides and October Hill were one and the same. I actually discovered Ludington’s final Montecito residence, October Hill, first in a 1983 issue of House & Garden. It wasn’t until I happened upon posts written years later by The Blue Remembered Hills on Wright Ludington and his houses that I began to put the pieces together. Since then I have added a 1973 issue of Architectural Digest to my collection, which features villa Hesperides. Through this course of discovery  I have learned a great deal more about the villa and the man behind the fantasy.

Wright Ludington made a career of collecting antiquities and art from a young age. After thirty years of collecting and entertaining at Val Verde (See A Man and His Houses, Part I) he decided he wanted a smaller classically-inspried residence designed to better showcase his collection of antiquities and art. Enter Santa Barbara’s first female architect, Lutah Maria Briggs, and her assistant Joseph Knowles, in the year 1957. In collaboration they conceived of a spare and elegant Palladian-style pleasure pavilion just off Bella Vista Road, which Ludington aptly named Hesperides. It was here, until 1973, that Ludington entertained countless designers and art world luminaries, many of them contributing to the evolution of a man and his house. The interior designer Leonard Stanley is noted for his contributions to the design of most of the interiors. 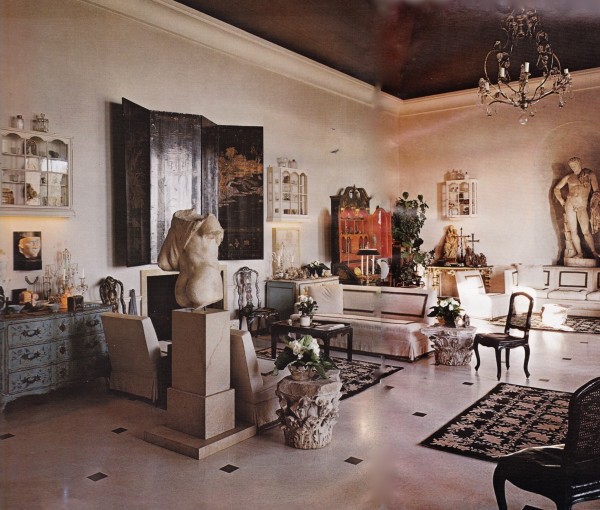 Ludington succeeded in creating more than a shrine to his beloved collection, he achieved the status of artist himself. Classically trained in the arts at Yale, Ludington curated a collection spanning pre-Columbian jewelry, Greek bronzes, Greco-Roman statuary, provincial Italian furniture, modern European paintings and sculpture, Gothic altar figures, and much more, into an arresting paean to the history of art. It has been commented that Ludington collected not what is stereotypical but what is remarkable and alive in art, daring to place a Paul Jenkins painting next to a Ming jar with a deft eye. Therein lies his talents, the art of the mix.

In the “Large Room”, as Ludington referred to it, grand proportions with a soaring ceiling painted dark to contain intimacy hosts his prize possession, a Roman marble figure of Hermes discovered near Hadrian’s Villa, set into a niche. It was moved here from the Beaux-Arts-style gardens Lockwood de Forest III created for him at his previous villa, Val Verde. The airy grandeur of the space allows us to believe we have entered the villa of a well-traveled patron of Palladio in the Italian countryside of the Veneto. An imaginative collection of art and antiquities includes an 18th-century chinoiserie screen, a Greco-Roman torso, Corinthian capitals used as end tables, a Mexican Mixtec skull encrusted with turquoise and gold, and Sumerian figures grouped with Gothic wood sculptures. Ludington created an elegant foil of pale limestone color for the walls, the floors and the chic framed-out upholstery. Legend has it that Billy Baldwin, a guest of Ludington, remarked that what the “large room” needed was a pair of showstopping chandeliers. One day, outside his shop in Los Angeless, Dennis & Leen, Leo Dennis sketched a proposal for a pair of large-scale ornamental chandeliers that, unless they were recently removed, remain in situ to this day. 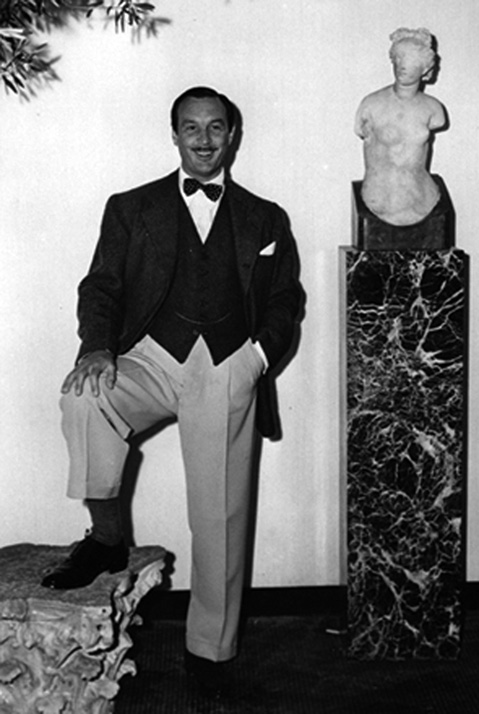 Wright Ludington posing in the Large Room at Hesperides. 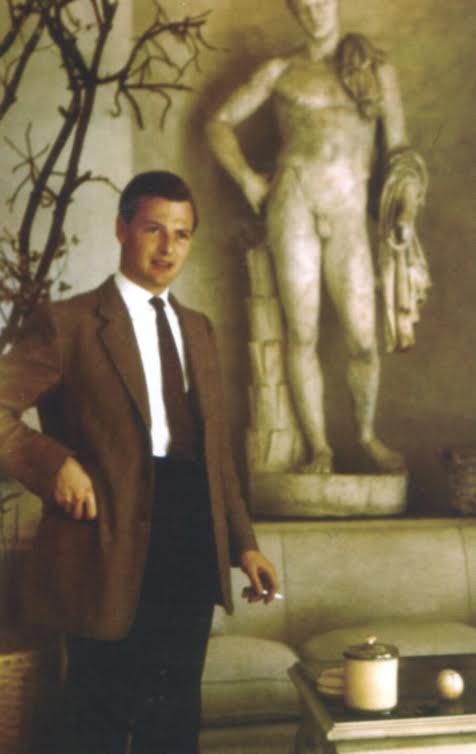 A young David Hicks posing for House & Garden in the main salon. 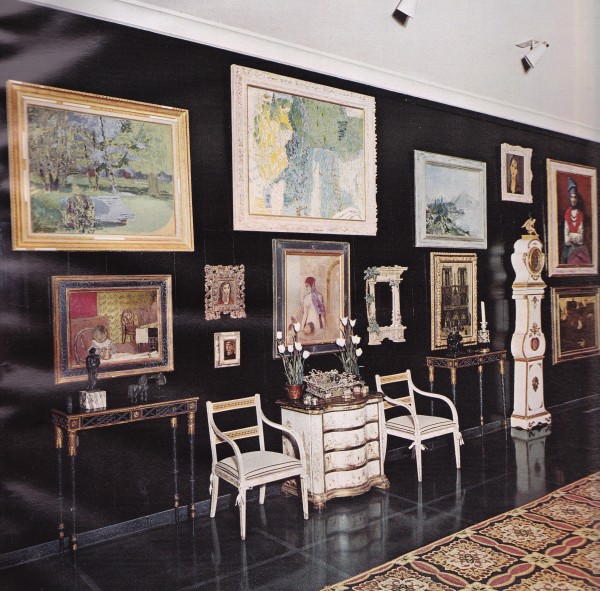 Ludington’s eye for creating original and striking spaces is evident in the gallery, what he called the “great hall”, which he had finished black to better showcase his impressive collection of paintings, which included some of his early Paris acquisitions from the 1920’s, including a 1923 Picasso Woman with Turban, upper far right, and a monumental work by Braque titled Nude. Surrounding an Italian commode are paintings by Picasso, Bonnard, Kokoschka and Rédon. 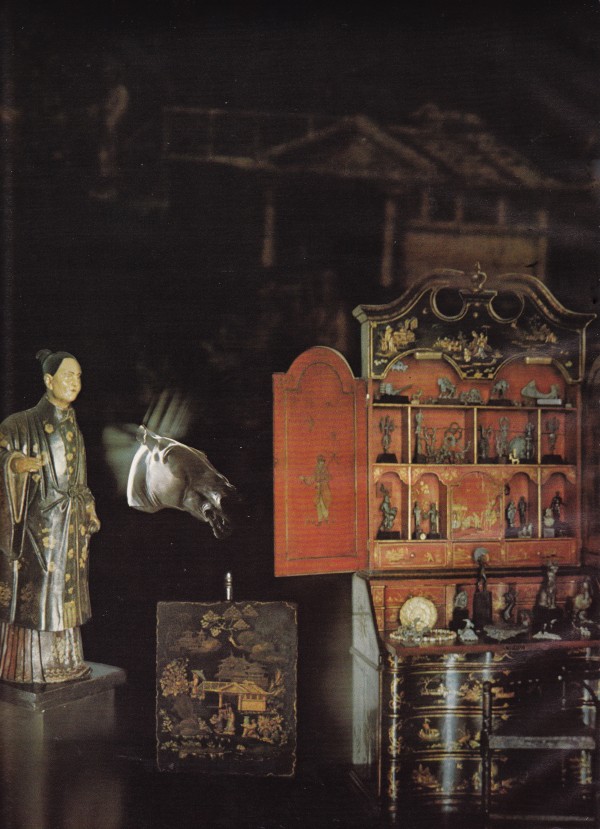 An exotic vignette in the gallery includes an 18th-century Venetian cabinet displaying miniature museum of Liristan bronzes, a chinoiserie figure from the Brighton Pavilion, a black marble horse’s head, and a chinoiserie fire screen. 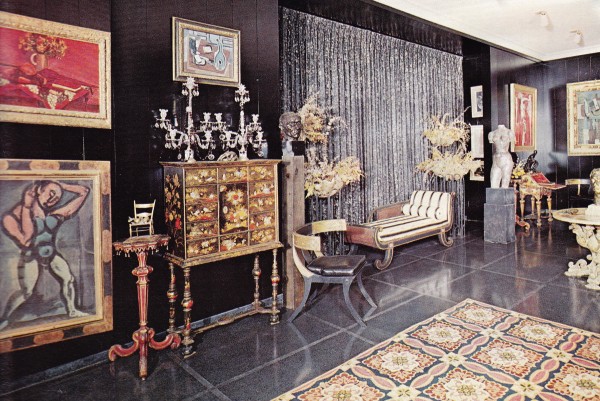 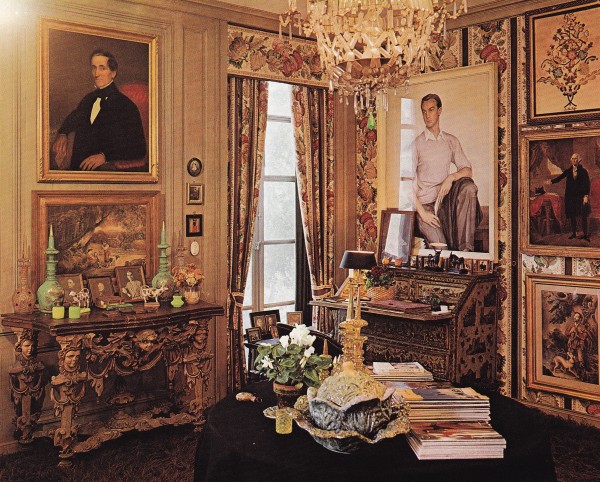 For the dressing room and study Ludington created a French atmosphere with walls of walnut boiserie complimented by a Brunschwig & Fils fabric. A carved Italian console centers one wall adjacent to an 18th-century découpage desk beneath a portrait of Wright Ludington by Sorine. 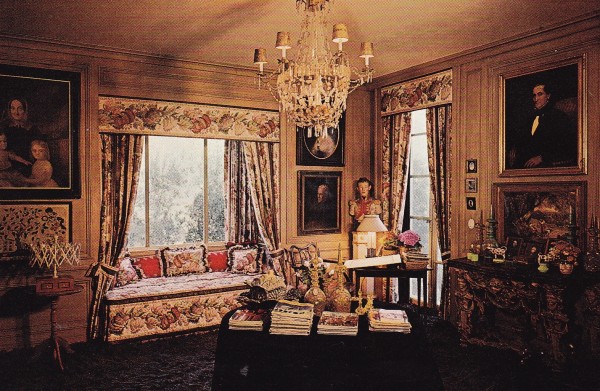 The opposite end of the dressing room and study featured a daybed set into a window bay. 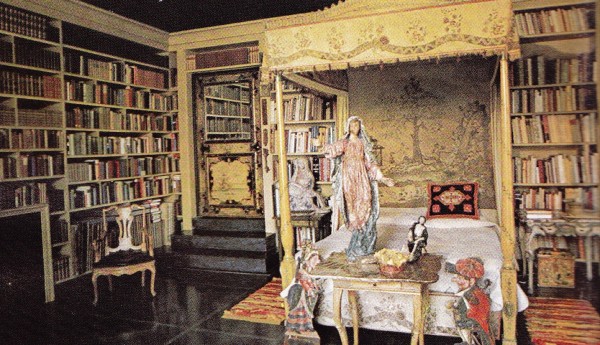 Wright Ludington’s bedroom featured a pair of antique Venetian doors and a 17th-century English bed with its original hangings. The walls were lined with art books and personal portfolios. Could you imagine anything better than to be surrounded by your beloved books? 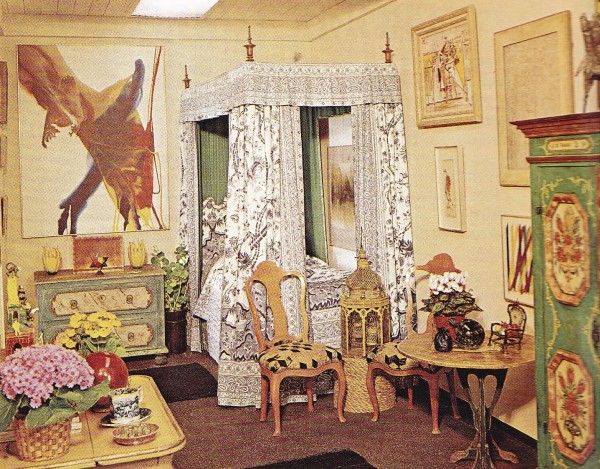 In the guest house a Paul Jenkins painting contrasts a trompe l’oiel bureau near the bed and a painted Austrian armoire in the foreground. This is said to have been the bedroom Billy Baldwin stayed in when he was a guest of Ludington (see The Blue Remembered Hills for more on that story). 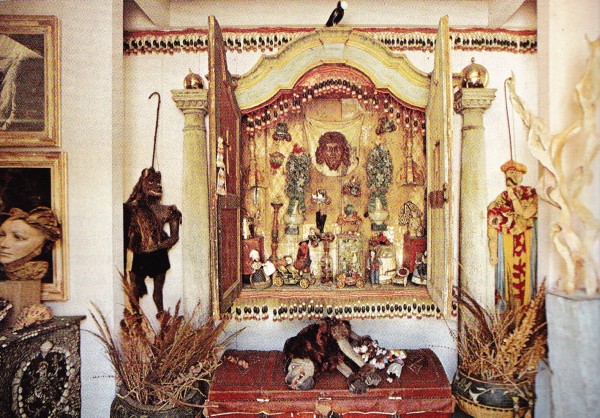 A close view of the secretary in the guest house reveals an a collection of priceless objects amidst Sicilian puppets and American toys. 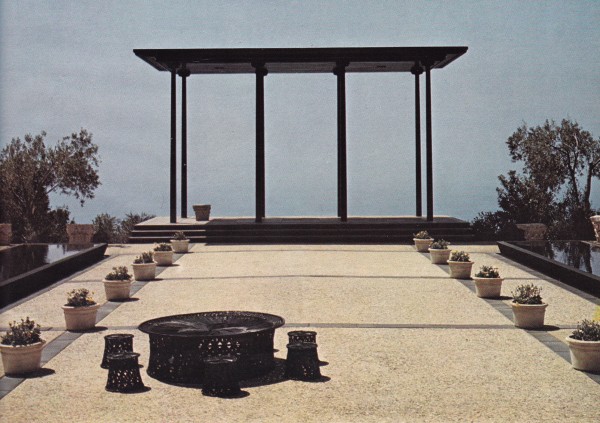 Among Ludington’s many friends and consultants was Anthony Hail, the late designer from San Francisco, who suggested placing a black pergola facing the ocean at the far end of the terrace to “stop the eye”. 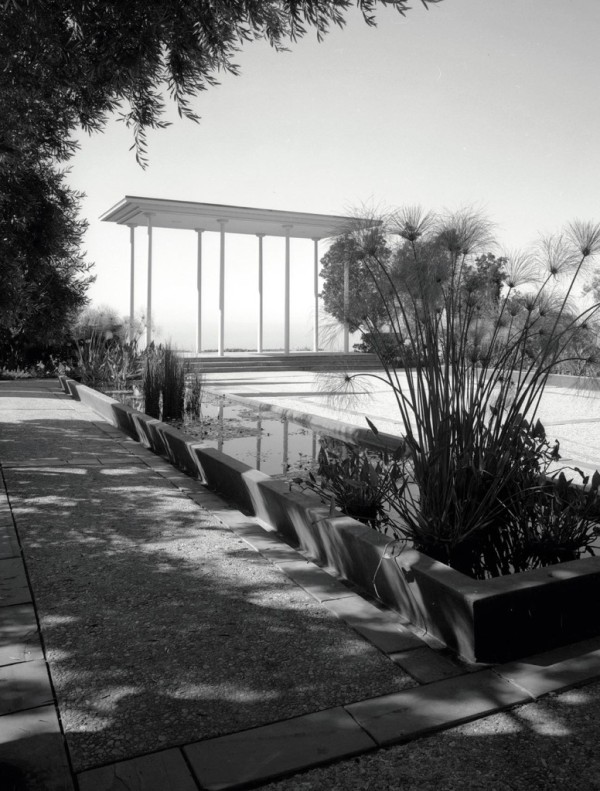 In a later, albeit black-and-white photo, the pergola is rendered in white. The landscape design at Hesperides was concieved by Elizabeth de Forest,  the wife of Ludington’s long-time friend and landscape architect Lockwood de Forest III.

Two years following Wright Ludington’s death in 1992 Alice and Donald Willfong purchased Hesperides from another owner. Ludington had sold the villa in 1973 after downsizing to a smaller yet similar villa by design, October Hill, which I will cover in my next post. The Willfong’s were no strangers to rescuing important California landmark homes such Hesperides, having sold their most recent Italian Renaissance-style “castle”, Castillo del Lago, in the Hollywood Hills to Madonna (you may recall the uproar she caused after painting its tower and retaining walls in alternating stripes of sienna red and ochre). While restoring  Castillo del Lago the Willfong’s were introduced to interior designer and furniture maker Craig Wright by the villa’s previous owner, Patrick Longchamp. When the day arrived to restore Hesperides to its original glory it was Wright they turned to once again – but not because the villa was derelict, but because its previous owners had bastardized its purity, painting its rooms in Floridian citrus hues. 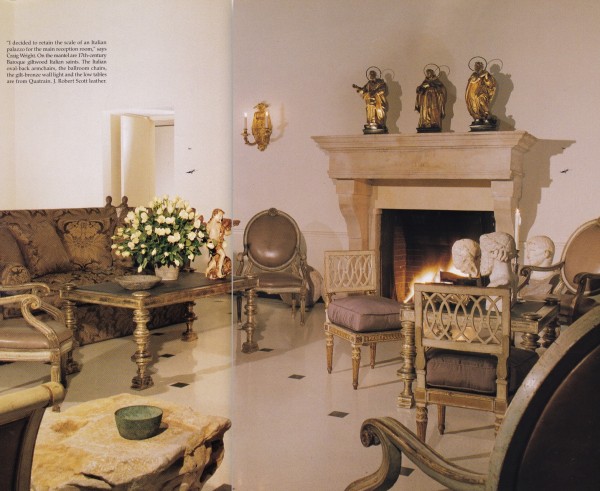 Wright restored the essential ambiance of a palazzo in the main salon with reproductions of Italian antiques from his studio Quatrain. Sadly, the original elegant and minimalist mantel was replaced by a bolder design evocative of the 1990’s mantra “more is more” and “bigger is better”. 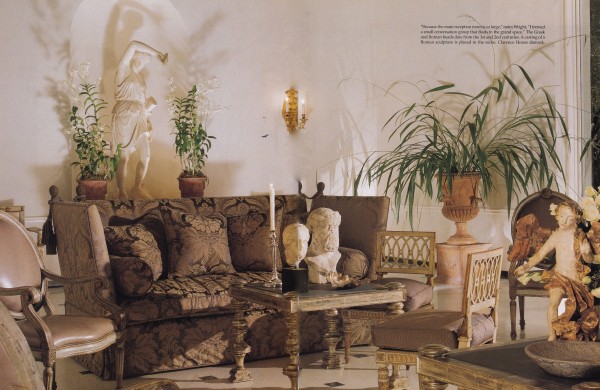 Though, in my opinion, the suite of reproduction furniture feels formulaic I do love the air of romance provided by potted lilies and palms in urns. While the Roman heads on the cocktail table date from the 1st and 2nd centuries the sculpture in the niche, which once housed Hadrian’s Hermes, is a casting of a Roman sculpture.

The dining room opens onto the entrance gallery, revealing a Roman torso of Hercules set before a northern Italian Neoclassical mirror. 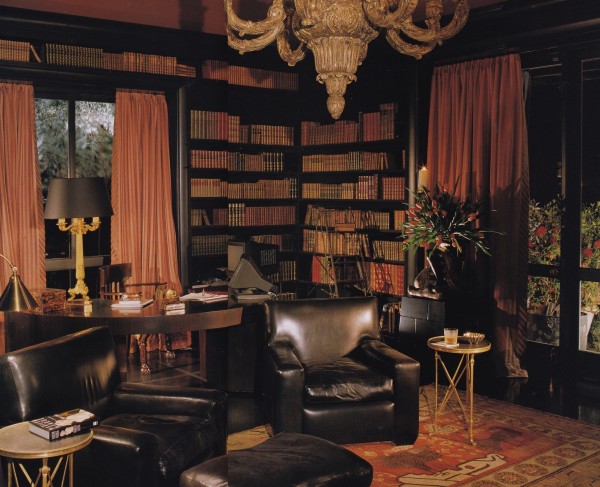 The Willfong’s and Wright turned Ludington’s book-lined bedroom into a library and home office, painting the walls, doors and bookcases black to match the black terrazzo flooring. 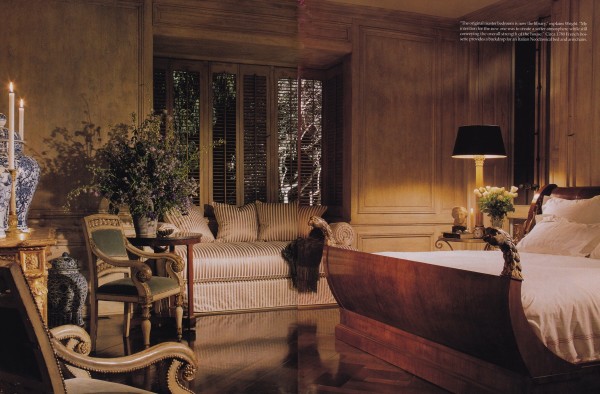 Again, it is obvious what had been Ludington’s dressing room and study is now the master bedroom, with its French boiserie lined walls, punctuated by a show stopping Italian Neoclassical bed.

Last in the series of A Man and His Houses we will visit Wright Ludington’s final residence, October Hill.

Black and white photo of Wright Ludington’s salon by John F. Waggaman, from The Collector in America by Jean Lipman, 1971.

Villa Hesperides: New Chapter for a Renowned Montecito House written by Marilyn Bethany for Architectural Digest, May 1994, with photography by John Vaughan.

2 Responses to A Man and His Houses, Part II