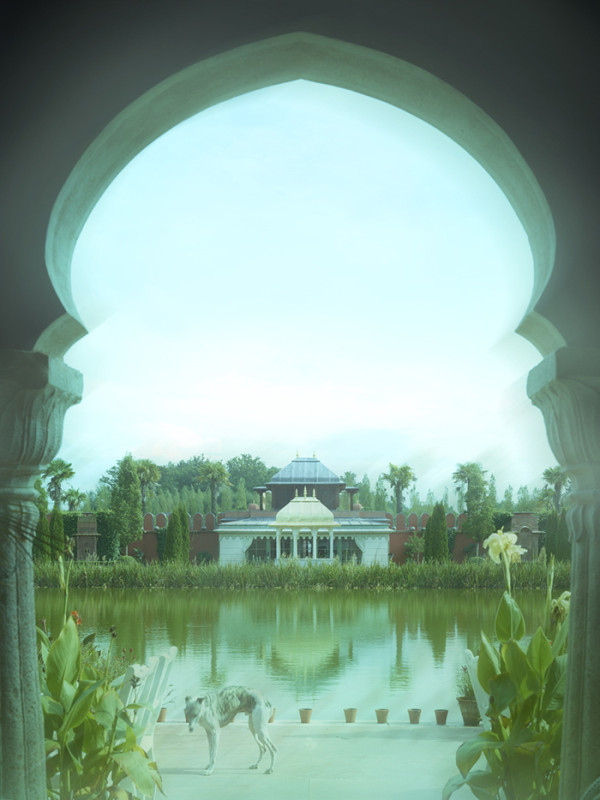 Jacques Garcia has been renovating and perfecting his 17th-century château, Champ de Bataille, for over twenty-years, the subject of his second monograph recently released that I covered in A Man and His Castle: Château du Champ de Bataille. As with many grand estates of its period the decorative fantasies of its owner were expressed as architectural follies in the form of small structures created for the sole purpose of delighting the senses. Idiosyncratic by nature, every whim and caprice could be exploited for the sake of pleasure. For Jacques Garcia it was presented in the form of le pavillon de rêves – “the pavilion of dreams” – which he lovingly imbued with mystery and exoticism.

Le Pavillon des Rêves transports you to the India of the 18th-century. As viewed from the main pavilion, a basin surrounded by wild irises reflects the crenellated sandstone wall of the “fortress” containing a temple and a tromp l’oeil “tent” of painted lead sheeting. The orientalist folly, or “factory” – as such a structure intended to beautify gardens was referred to in the 18th-century – is incorporated into the wall and made invisible from the outside by a lush hedge of poplars approximately twenty-six feet high. 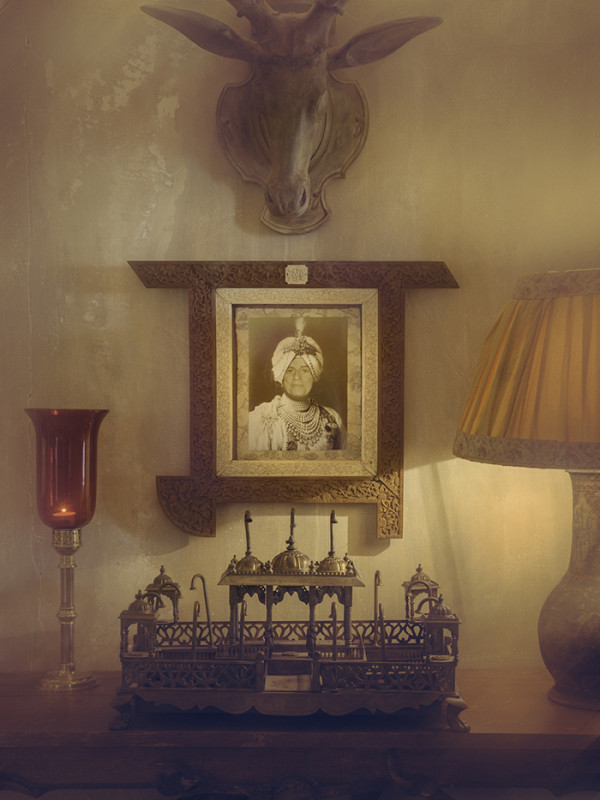 A portrait of Jacques Garcia dressed as a Maharaja sets the tone for a tableau including an Indian carved wood head of a donkey and a model of a temple. “A girlfriend created this collage of me from an old photo. I find it humorous – the true gift is the frame” remarked Garcia. 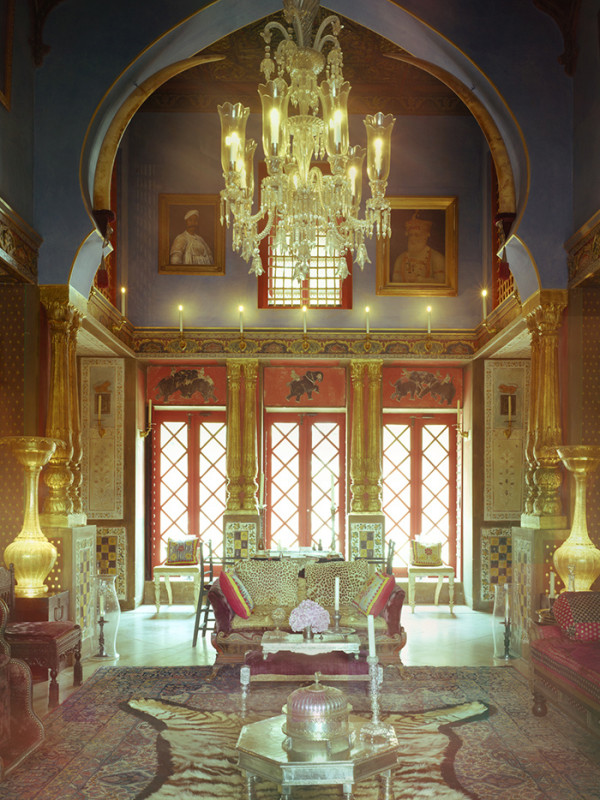 The main salon is dominated by a Turkish chandelier hovering above a set of Indian furniture sumptuously appointed with leopard pelts and Mughal silver. The frescoes of elephants around the windows comes from Indian houses. 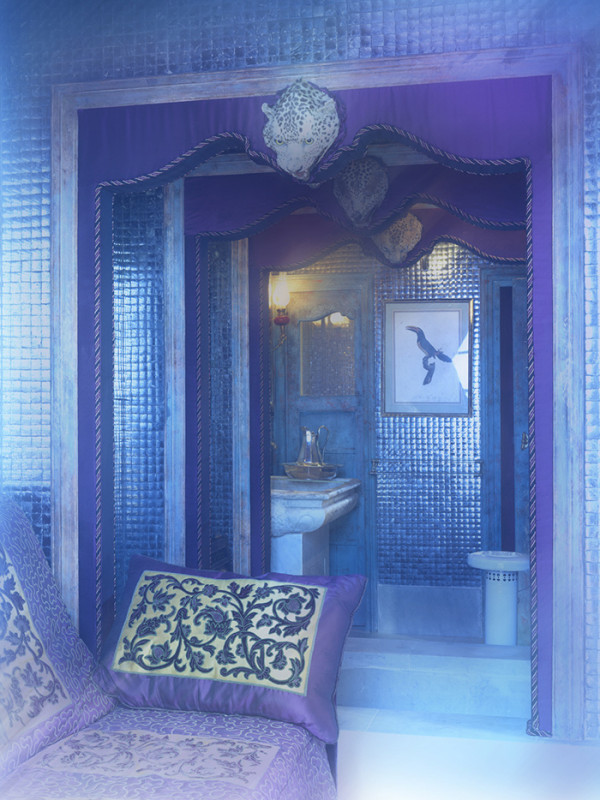 A succession of niches framed in violet taffeta adorned with leopard heads creates a theatrical atmosphere in the bathroom. The chaise longue is covered in quilted taffeta and 19th-century embroidery. 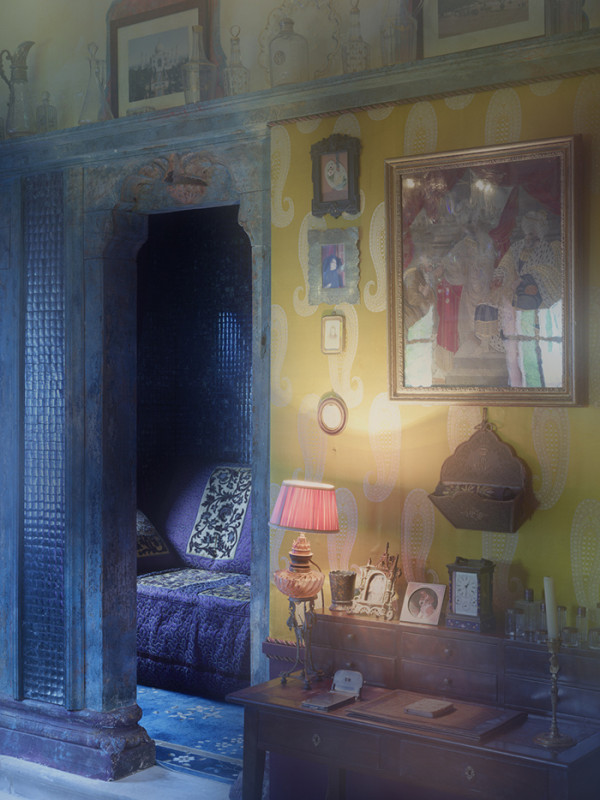 An 18th-century yellow Indian paisley covers the walls of a room in the main pavilion, which offers a view into the iris blue bathroom. 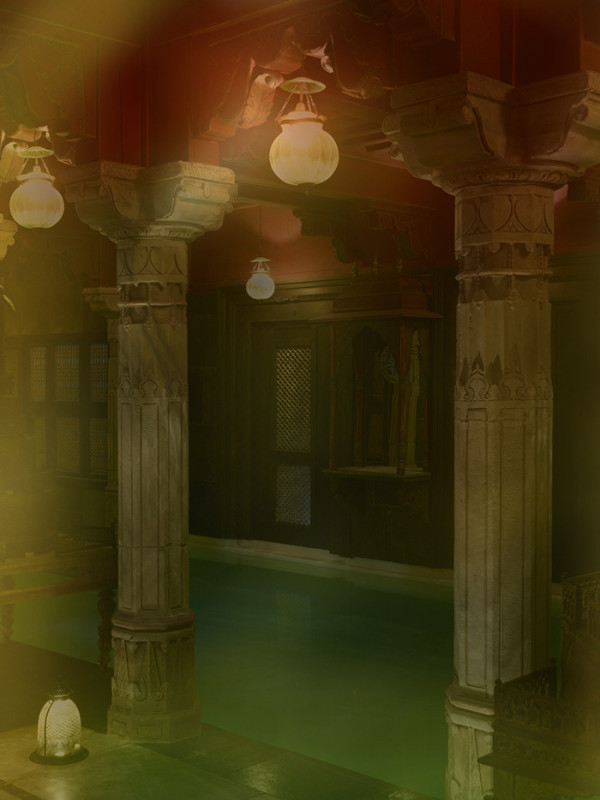 Between 18th century white marble columns decorated with polychrome paintings, acquired in Rajasthan, the exotic indoor pool is illuminated by hanging candlelit glass cloches.
If you are as fascinated with pleasure pavilions as much as I am you can read about Jacques Garcia’s other flight of fancy at Champ de Bataille in my post Folie de Jacques.
French AD, July 2104. Photography by Mai-Lihn.