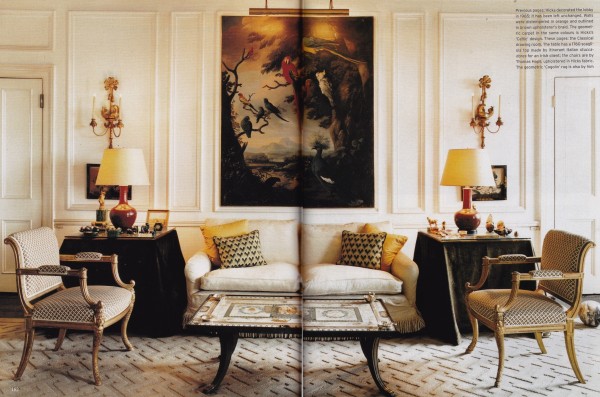 Forty-nine years ago, in 1965, David Hicks decorated this apartment for an undisclosed client, referred to as “Lady X”, comprising two floors running the length of two 1830’s houses overlooking Hyde Park in London. In 2003 his son, Ashley Hicks, was alerted to its preserved state and was encouraged to view it when he was working on his book David Hicks: Designer. What he discovered was short of a David Hicks museum, frozen in time.

The apartment may very well be the only David Hicks time capsule left in existence. Since 1965 its owner has changed not a thing. The rambling apartment consists of a lower floor of mostly formal rooms and an upper floor that showcases Hicks’ streamlined Modernism and penchant for color. The apartment was considered one of his best at the time of its completion and remains a testament to his ingenuity, vitality and timeless style.

The Classical white-on-white paneled drawing room, above, exudes a formal elegance, one that Ashley Hicks refers to as slightly pompous and “grown-up” given the demands of the boiseries. A disciplined arrangement of fine antiques includes a pair of chairs by Thomas Hope covered in a David Hicks fabric floating upon a sculpted tone-on-tone David Hicks geometric “Cogolin” rug with deep loden hued draped tables flanking the sofa, hinting that Hicks has left his mark. 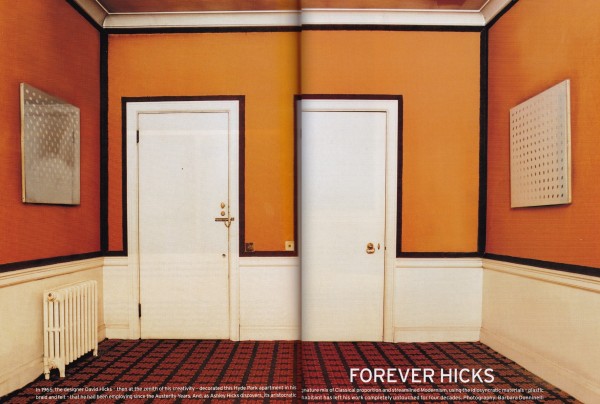 David Hicks conceived a lobby upstairs as a transitional space from the lower, more formal level, to the modern suite of rooms of the second floor. The walls were distempered in orange and framed with dark brown braid. The carpet is Hicks’ “Celtic” design and runs through the living room and study beyond. 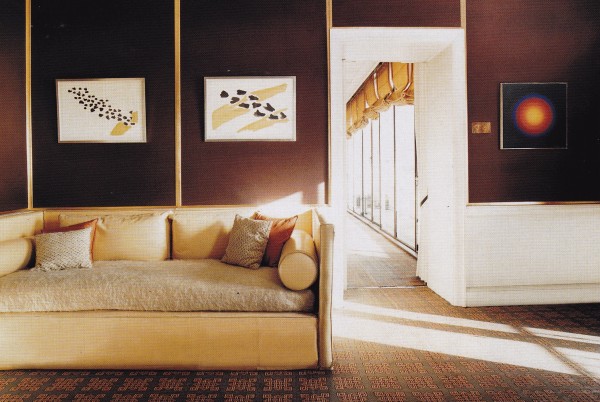 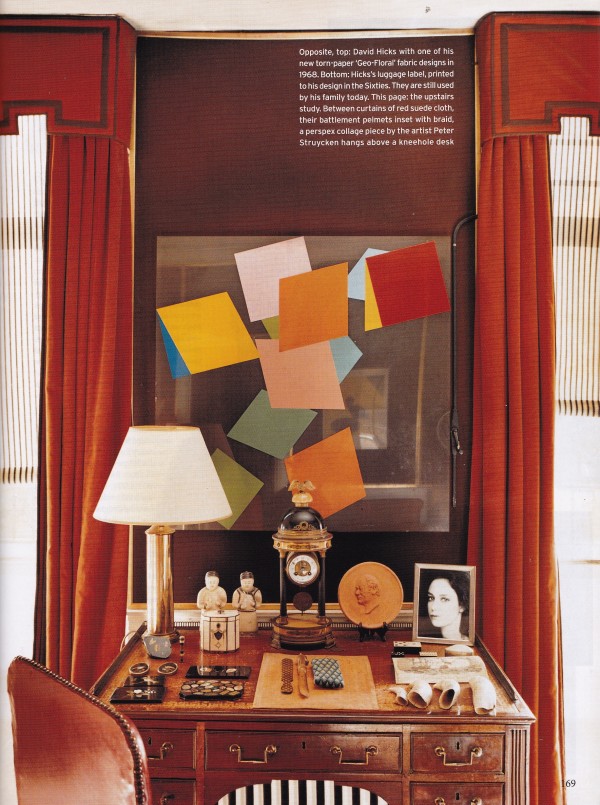 The walls of the upstairs study, above two photos, are paneled with a white wainscot and covered with purple felt divided by narrow gold fillet on white frames. A perspex collage by artist Peter Struycken hangs between  curtains of red suede cloth with castellated pelmets edged with braid. A pair of daybeds that must have certainly inspired John Saladino’s own furniture collection were designed by Hicks and his assistant at the time, Billy McCarty.

Hicks originally envisioned bright yellow walls for the upstairs living room but a subtle off-white won out in the end. Yet, Hicks found opportunities to introduce yellow, and variations thereof, with abstract art work by Jeremy Moon, Gunther Uecker and John Hoyland, and with moleskin upholstery on the Italian sofa and chairs. Though you can’t tell from this photo, the windows are framed at either end with off-white wool curtains edged in shiny black plastic braid. Imagine that, plastic! Today most of us cringe at the mention of plastic, but in his day this was a revolutionary new material to be manipulated. 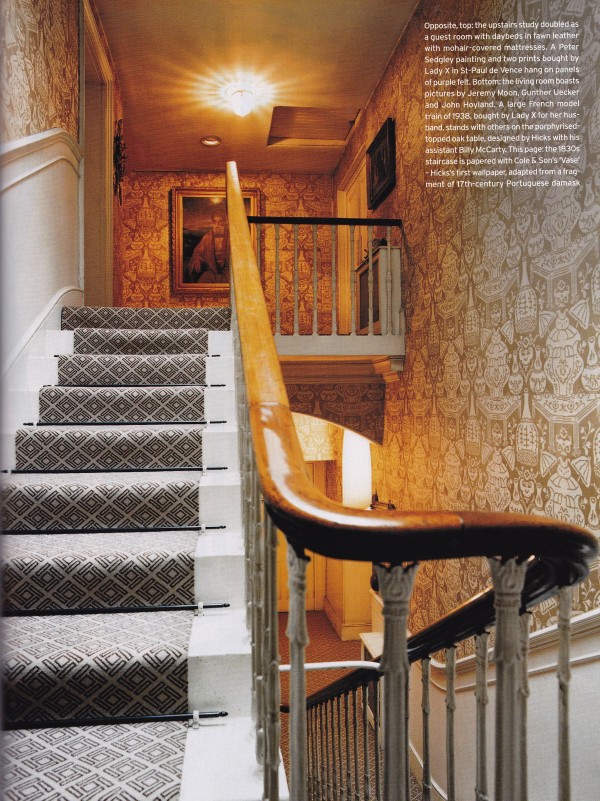 The original 1830’s staircase is papered with Cole & Son’s “Vase” pattern, Hicks’ first wallpaper adapted from a fragment of 17th-century Portuguese damask – which first hung in the staircase hall of his country home, Britwell, in Oxfordshire, in a rich ultramarine blue. 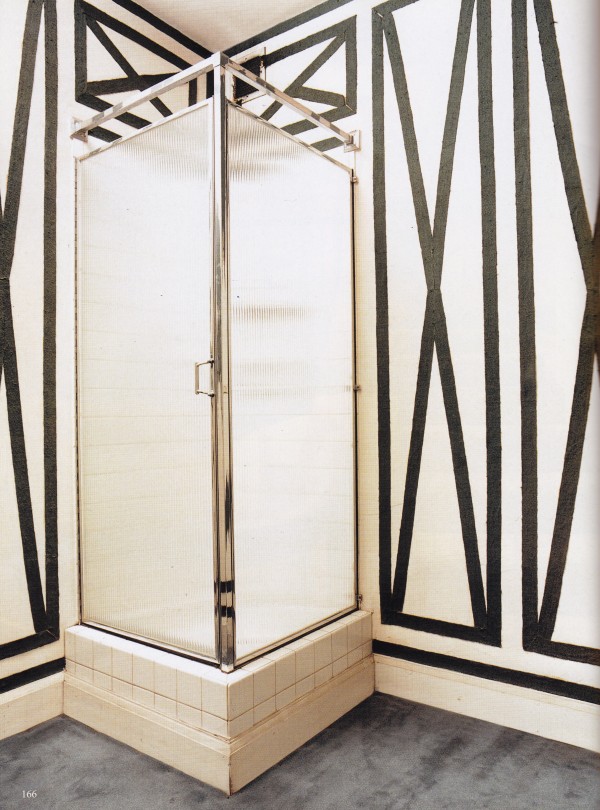 Ironically, due to poor water pressure, the shower in this bathroom has never been used. Hicks applied panels of black braid to plaster walls to simulate Classical panels. 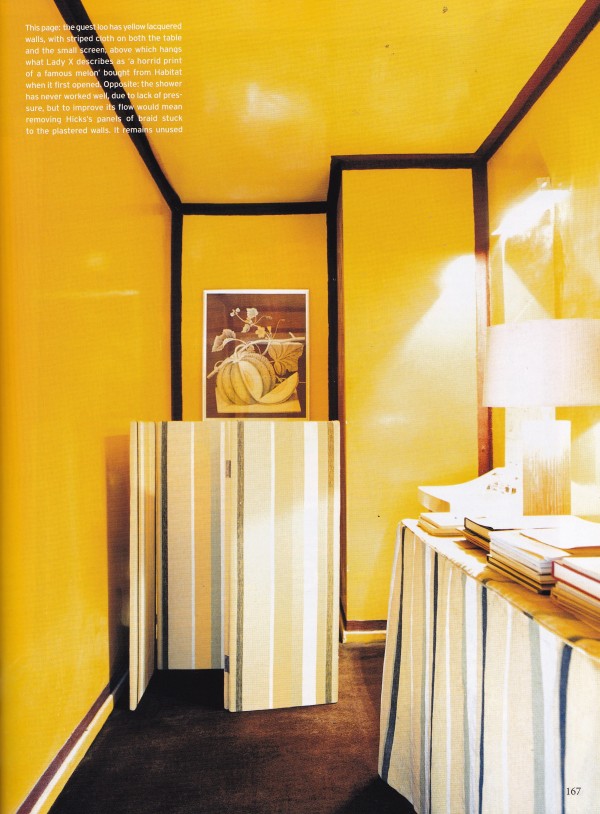 The lacquered yellow guest bathroom, framed in black braid and accented with a table and screen covered in a striped fabric, also remains unused to this day.

As unconventional this arrangement of contrasts must have seemed in 1965 the high-low mix of Classical proportions, streamlined Modernism and daring utilization of radical materials, makes the house that David Hicks conjured for “Lady X” a testament to lasting style and taste in an age of fast trends.

Material for this post based on an article written by Ashley Hicks in the March, 2003, issue of The World of Interiors. Photography by Barbara Donninelli.