The McGuire’s in Stinson Beach 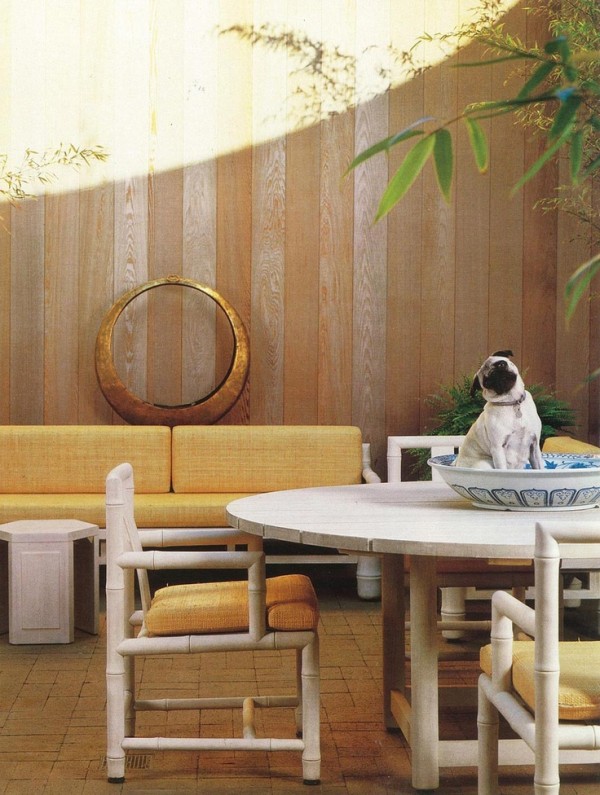 Since before I was born my family has returned time and again to our favorite California beach, our summer home away from home, Stinson Beach. My mother and father discovered it for themselves in the 1950’s on one of their romantic road trips in my father’s red Austin Healey, and it was love at first sight. Since then it has been a favorite family meeting place for summer fun in the sun.

The journey from San Francisco is an adrenaline rush, traveling along Highway One’s vertiginous switchback two-lane mountain road over Mount Tamalpais through Muir Woods and Muir Beach, until reaching the crescent stretch of Stinson Beach forty-five minutes north. With the theater of the mountains plunging below into the Pacific down sheer cliffs I still feel a rush when I round that last bend and Stinson Beach comes into view, with its sandy crescent cove separated by the Pacific to the west and a salt water lagoon with views of Mount Tamalpais to the east. Little has changed in this sleepy village since my parent’s first discovered it. The same market still stands as it did, among a few other white-painted clapboard structures, many of them once homes built at the turn-of-the-20th-century now housing a handful of restaurants, boutiques, a bookstore, and art galleries. But don’t put off filling your tank before you head here: there are no gas stations in Stinson Beach. In fact, you’ll be happy to know corporate America is nowhere in sight. It’s a funky little town with vestiges of the 1960’s hippy era to be found here and there. But, mostly, it’s a natural wonder of beauty and pure relaxation nonpareil. 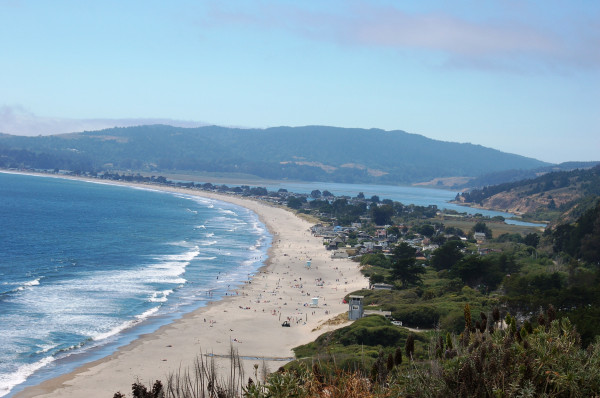 The stretch of Stinson is divided between the public beach on the south end, and the private beach on the north end. It’s on the north end you will find the gated community of Seadrift, where the Bay Area’s elite buy or rent vacation homes. For years Diane Fienstein has retreated here to her Seadrift home, as had Elinor and John McGuire, of McGuire Furniture, until the sale of their home in 2012 – the feature of today’s post. When I was a teenager there were two houses on this stretch of beach I was most interested in and curious about: the Hertz beach house (of Hertz car rentals), which is sited on the sands of the public beach, and the McGuire’s cedar clad pavilion in Seadrift.

Seadrift offers a few hundred families a slice of prime real estate heaven, accessed down a narrow mile-long sandspit, with beachside houses facing the Pacific to one side and homes overlooking the Bolinas Lagoon, a bird sanctuary, on the other. The McGuire’s benefited from both perspectives, with a main house on the beach and a guest house across the street on the lagoon. For years I dreamed of being offered an invitation to take a peek inside but, alas, it never came (oh, how I wished I had asked!).

You could say Seadrift is the closest thing to the Hamptons when viewing it from above. Its pristine white sand beach and idyllic panorama are stuff of legends. However, Stinson Beach is not a social mecca. Privacy and solitude is desired within settings that remain low-key and approachable. While tennis and water sports are certainly available, usually all anyone here is interested in is long walks on the beach.

Given the community’s height restrictions most of the homes here are unassuming with low rooflines, with many of its earliest houses resembling the ranch house style or a beach shack. The McGuire’s wanted something more elegant. Enter architect Joseph Esherick. Instead of the usual low-profile horizontal lines he proposed verticality, with thirteen-foot ceilings offering a sense of spatial grandeur, all within the allowed restrictions. Floor-to-ceiling windows open onto views of the sea on one side and the mountains on the other. 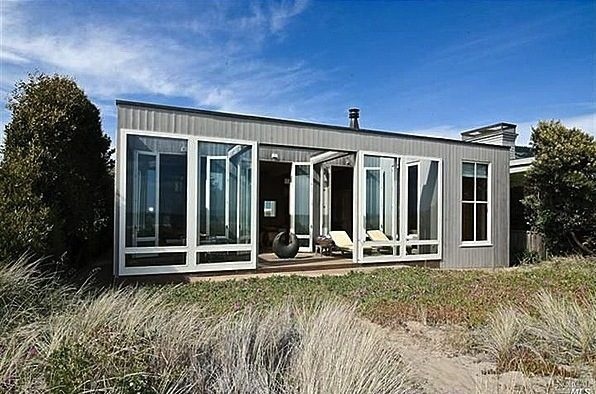 One of the pitfalls of living on the beach are those occasional gusts of wind sending sand into the air and onto decks, patios, terraces and often indoors. To assuage this Esherick devised two terraces – one on the beach side that is glass-enclosed, and the other an interior courtyard with an oculus opening to the sky, giving the impression of a dome, creating elliptical dances of sunlight and shadow on the walls. 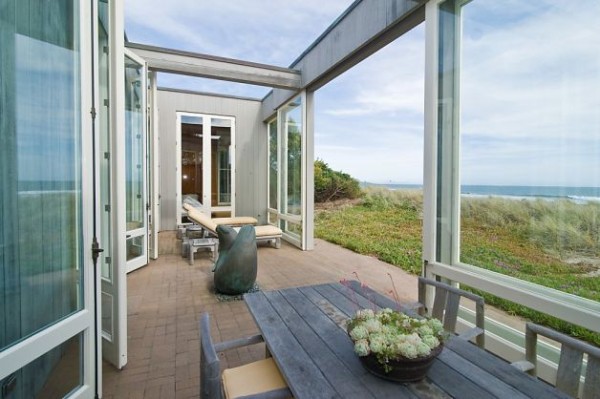 The west facing enclosed terrace opens on to the Pacific. 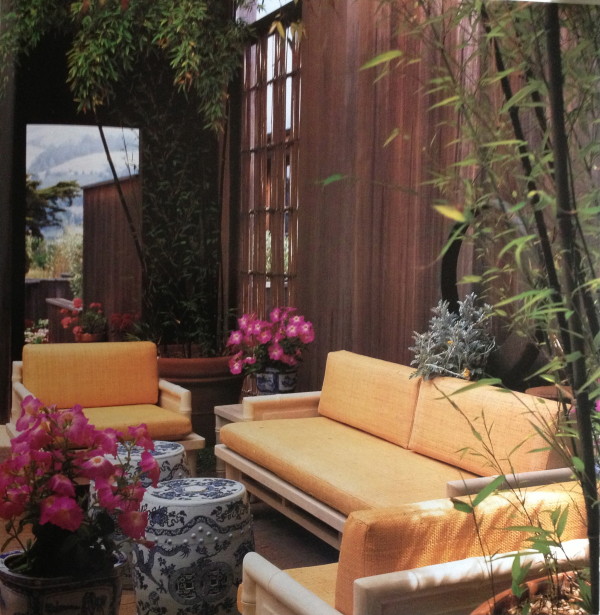 The entrance terrace, above and below, is shielded from the wind but open to the sky. 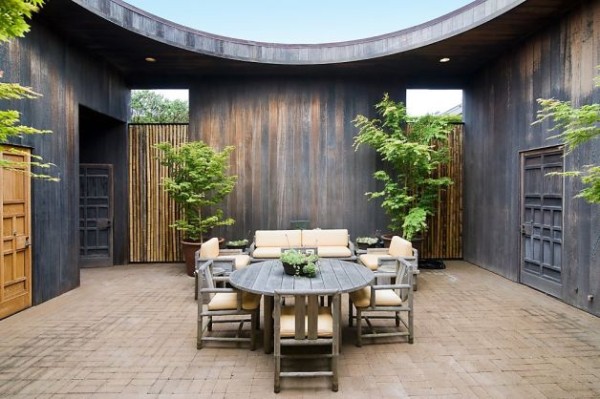 For the home’s interiors the McGuire’s turned to their close friend Andrew Delfino for assistance. Not merely a summer resort, they wanted their rooms to provide winter coziness as well as summer airiness. For warmth Delfino suggested the golden tone of glossy pecan for the floors and hemlock for the walls. In keeping with the McGuire’s love of the Far East floors were dressed with mats from Indonesia and many of the doors are faced with panels from old Japanese doors. For furniture the McGuire’s looked no further than their own storage lockers, a treasure trove collected over decades of travel. 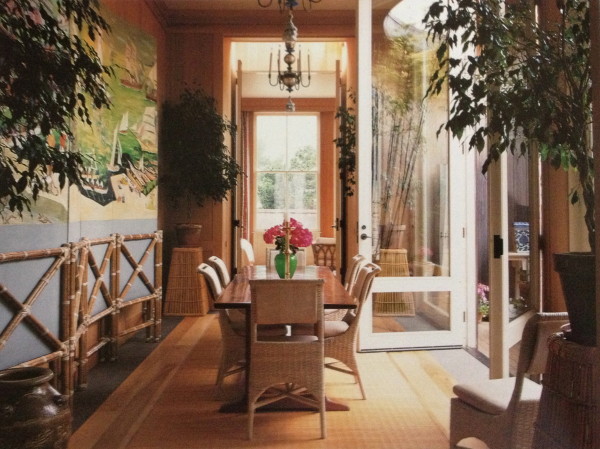 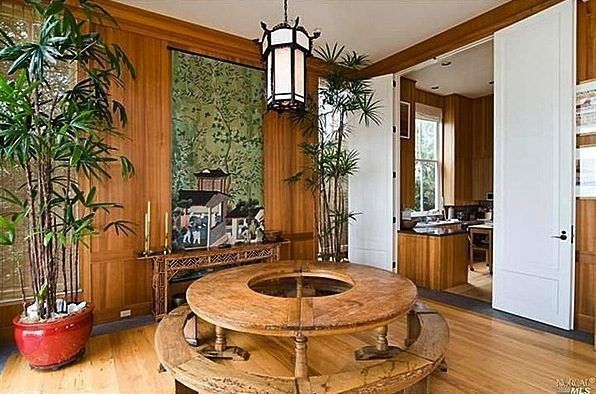 Two views of the dining room, taken at different times, features tall doors and soaring ceilings that play up the verticality of the spaces. 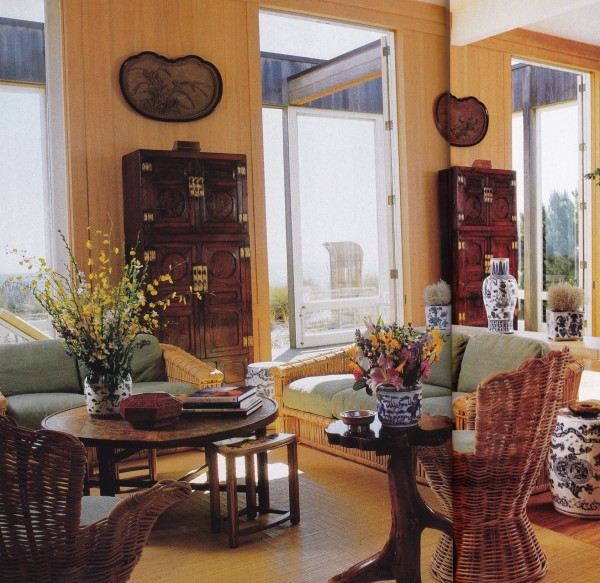 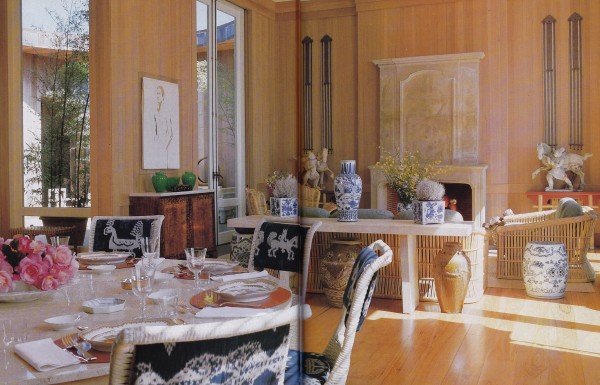 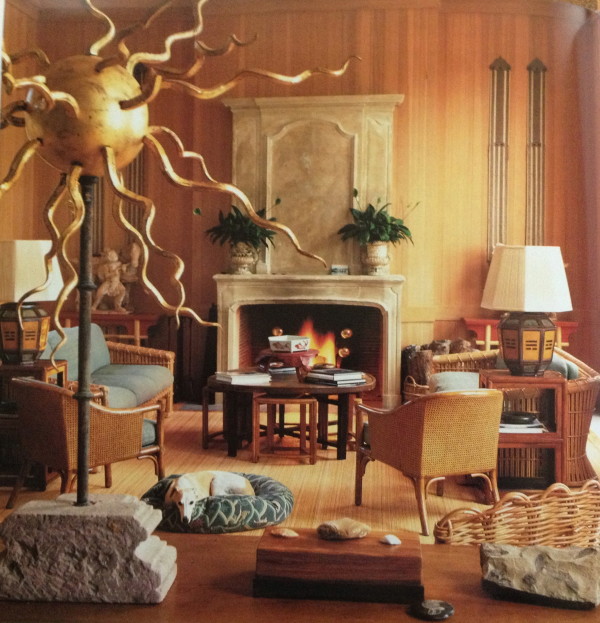 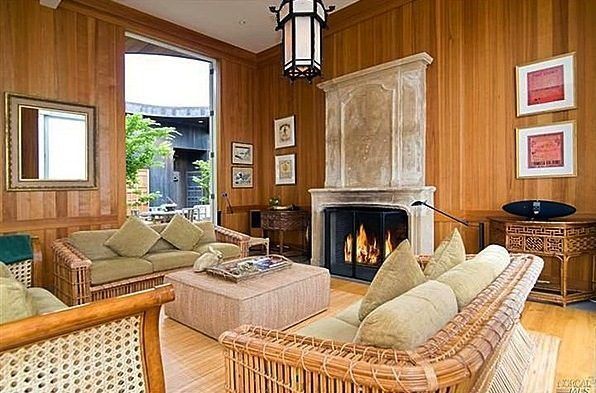 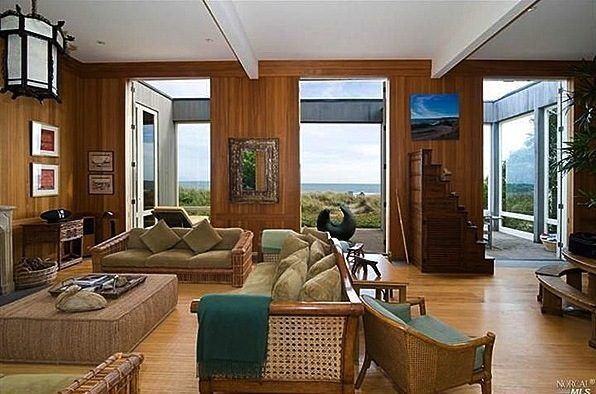 The living area, photographed at different times, features furniture from the McGuire Furniture company and the McGuire’s collection of Asian antiques and decorative arts. The  two cabinets in the first photo are 19th-century Chinese wedding cabinets. Tan-style sculptures stand on consoles flanking the French limestone fireplace in the second photo. The floors are pecan and the walls are hemlock. The last two photos were taken when the house was listed in 2012. 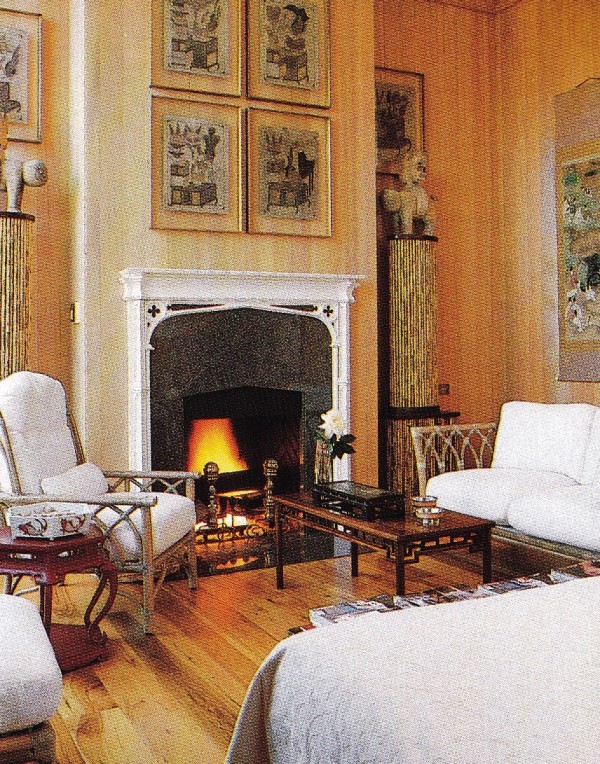 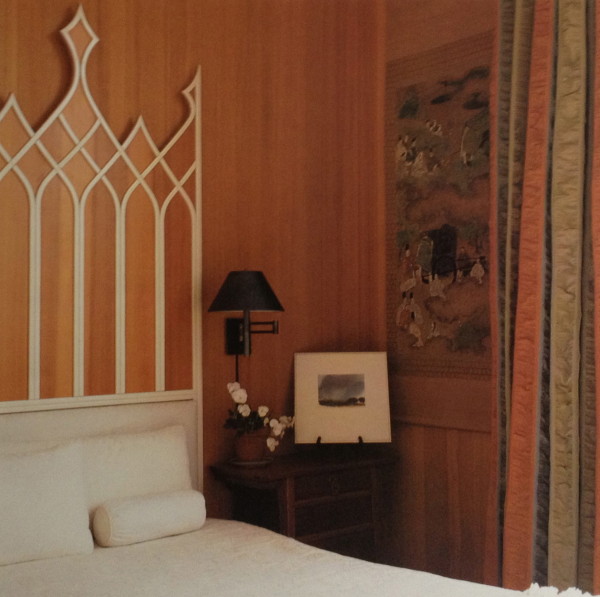 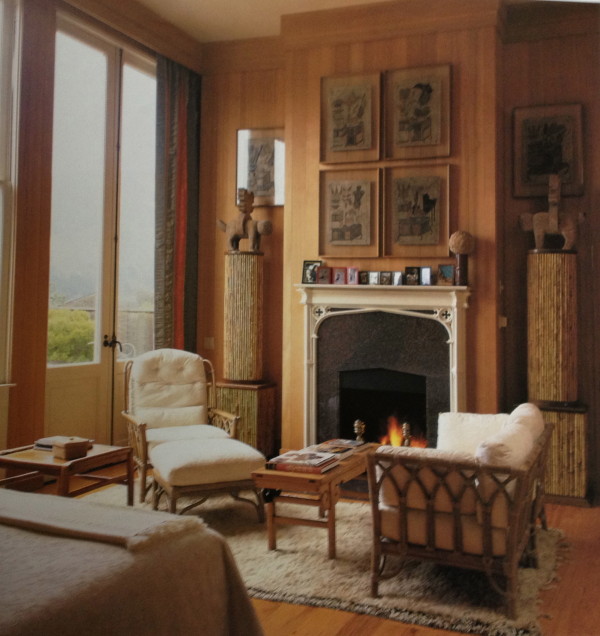 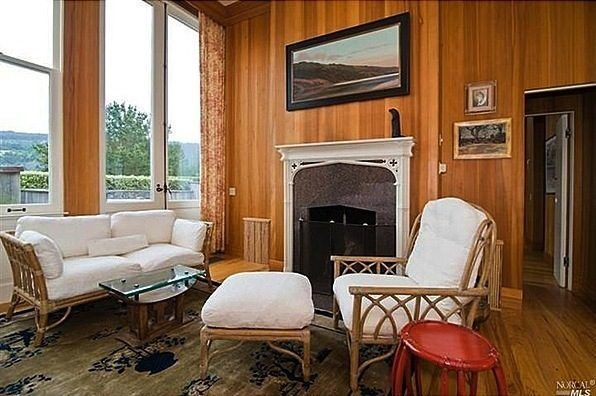 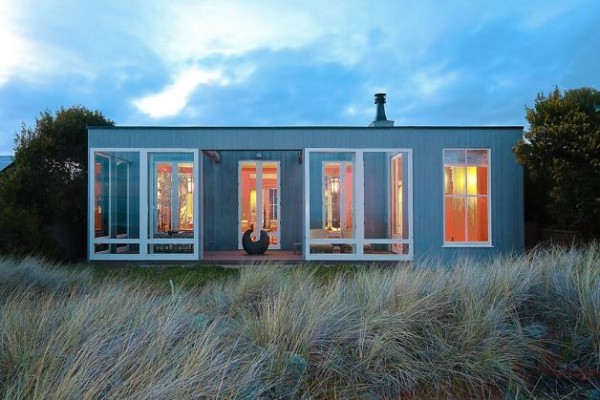 2 Responses to The McGuire’s in Stinson Beach