For decades people, like myself – who love beautiful houses – have mused about the interior lives at Villar Perosa, the late Gianni Agnelli’s family legacy in the hills of Piedmonte, Italy, overseen today by its chatelaine, Gianni’s widow, Marella – the last of the living “swans”, the affectionate name Truman Capote gave his gaggle of beautiful, wealthy, and powerful ladies who lunched often at La Côte Basque in New York City in the 1950’s. Only a scant few photos of the villa’s interiors have surfaced in the years since Gianni inherited the estate in 1940 and married Marella in 1953. Careful to tread lightly with a centuries-old family estate Marella brought in Stephane Boudin to refresh some of its interiors and add a note of le style Jansen. Though grand, the estate served as a retreat for the Agnelli’s only during the months of September and October. The first space they approached was the piano nobile’s Baroque gallery (in the photo above) covered with exuberant stuccowork framing 18th-century Chinese export wallpaper and garlands that extend and intersect across a groin-vaulted ceiling. To this the duo added a confection of pastel colored silks and velvets to the gallery’s chairs and settees, colors that Marella likened to macarons.

Now, for the first time since Horst P. Horst photographed Donna Marella Agnelli at Villa Perosa in 1967, the September issue of Architectural Digest features a glimpse into the storied rooms of the Agnelli clan’s famous rococo hunting lodge in the foothills of the Italian Alps in anticipation of Marella’s forthcoming book Marella Agnelli: The Last Swan, due out in October.

Marella Agnelli photographed in 1967 by Horst in the piano nobile’s main salon with a sofa designed by Stephane Boudin and panels of antique Chinese wallpaper. 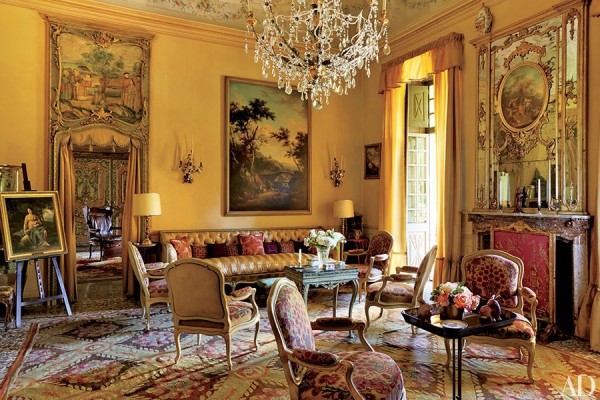 In another salon an 18th-century landscape by V. A. Cignaroli surmounts a sofa, while the easel holds a painting of the Marchioness of Prie, a former owner of the villa.

Majolica plaques ornament the walls of one of the villa’s dining rooms. 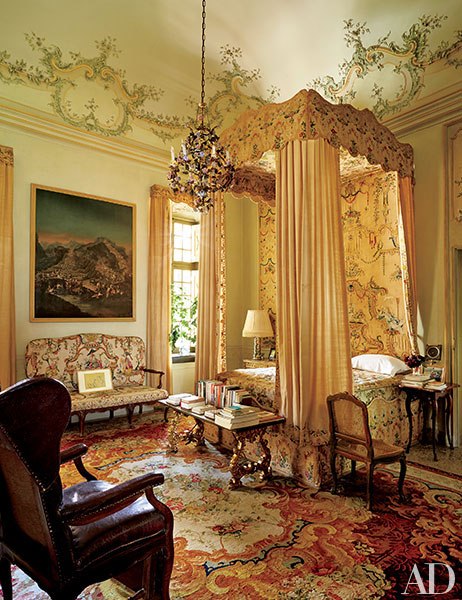 For more than three decades, her husband, Gianni Agnelli, slept in this grand room on the piano nobile. The 18th-century bed is curtained with embroidered fabric of the same period. 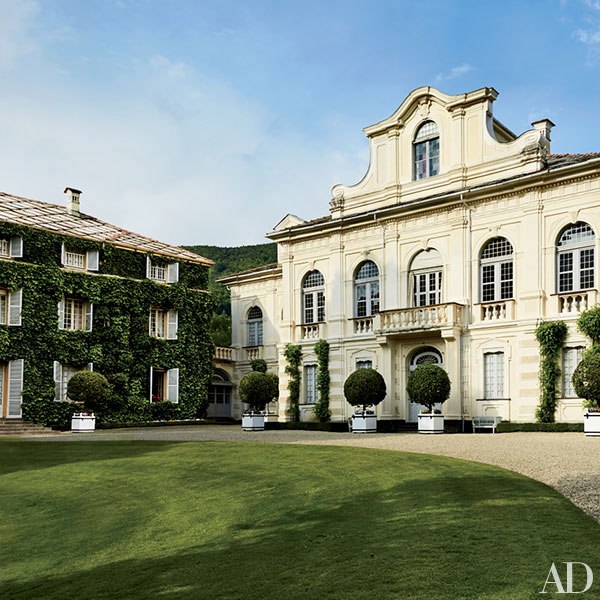 Adjacent to the original 1730s house, attributed to architect Filippo Juvarra, is the vine-covered children’s wing, constructed in the 1920s.