Up at the Villa

In an article written by Marella Caracciolo Chia titled “La Dolce Vita”, in the May issue of Architectural Digest, Caracciolo Chia shed further light on two villas – one imagined, the other real – that I particularly fancy: the imagined villa from the 2002 movie adaptation of Somerset Maugham’s novel Up at the Villa and, the other, the very real Villa Cetinale, whose dining room made a cameo appearance in the very same movie. I covered Villa Cetinale, located in Sienna, Tuscany, last year in a post titled Villa Cetinale, including much of the back-story on the 17th-century villa and its most recent stewards, Lord Antony Lambton and heir apparent, Lord Ned Lambton – the current chatelain of the villa. That being said, there is no need to rehash what I’ve already written about the villa. In her article Caracciolo Chia disclosed that one of the villa’s dining rooms, the one with 18th-century hand-painted  murals, was the setting for a dinner scene in the movie. Eager to find stills of this scene I turned to Google but came up empty handed. I thought I possessed a DVD version of the movie but, alas, no luck there either. Further, it’s unavailable on On Demand or AppleTV. Drats it all! I guess I can no longer put off subscribing to NetFlix or another such Internet streaming media provider. I was so looking forward to viewing Up at the Villa once again, and including a photo in this post of the scene taken in the muraled dining room. If and when I do I will update this post with those scenes. For now, here is our “lady in waiting” …

The dining room, featured in the movie “Up at the Villa”, is muraled with 18th-century scenes of mountains and castles based on the surrounding landscape, creating the atmosphere of a garden pavilion.

While the dining room was the only interior space used in the movie you will recognize the grounds in some of the scenes. Below are some additional photos of the villa featured in the May issue of Architectural Digest.  It was brought to my attention by their PR department that they prefer no more than five watermarked photos be used from any given AD article.  Visit Architectural Digest for the full story.

The arms of Cardinal Flavio Chigi, the villa’s original owner, are painted on the drawing room ceiling. 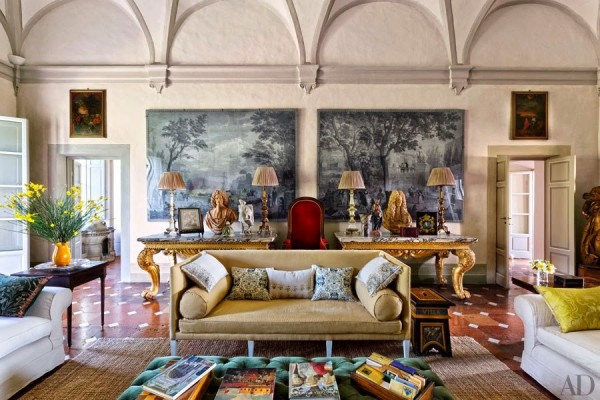 Along one wall, grisaille landscapes hang above gilded consoles.

Chairs slipcovered in white linen encircle a banquet table in the ground-floor dining hall; the armchairs at right are upholstered in a Claremont damask, and the table lamp between them is an altar taper converted by family friend and interior desinger Camilla Guinness.

For the full article on Villa Cetinale read “La Dolce Vita” by Marella Caracciolo Chia featured in the May issue of Architectural Digest here. All descriptions taken directly from the article. Photography by Oberto Gili.