A TALE OF TWO VILLAS 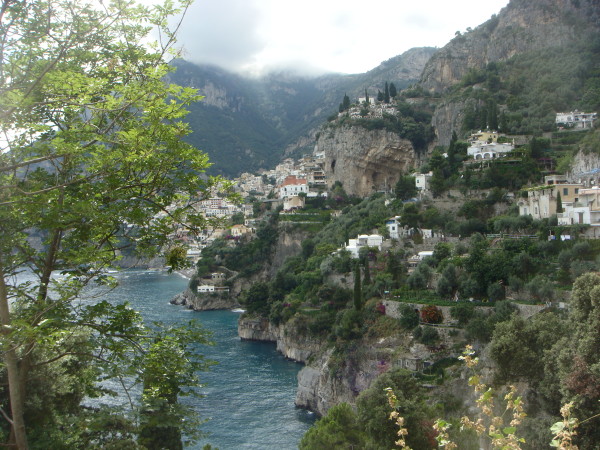 A view of Positano from Villa Maura. Photo by Cristopher Worthland.

The Amalfi Coast may very well be my favorite destination. The winding, vertiginous coastline – defined by calcareous-dolomitic rock formations – plunges into the Tyrranean Sea, creating a dramatic landscape  spotted with mountain-hugging towns and sun-kissed dwellings. The air, scented with lemon (an Amalfitani staple), Mediterranean scrub, local herbs, and the sea mix to produce an aphrodisiacal spell over your senses. La Costieri Amalfitana is a sensory delight in every sense of the word – an operatic virtuoso producing stunning natural beauty in an oasis of tranquility with a dose of glamour , luxury and a jet-set social scene.

Whenever my partner and I vacation in particularly scenic locales, such as the Amalfi Coast, we prefer to rent a private residence. Villa Maura is sited directly above Franco Zeffirelli’s previous long-time Positano home, Villa Tre Ville (now a molto chic boutique hotel), just off the Amalfi highway. Like all dwellings in Positano it is terraced down the mountainside. One enters through a gate at street level and climbs down one-hundred-and-fifty steps to the entrance door. Alternatively, there is a side road entrance with no parking to receive guests and deliveries – where grand entrances are made through a large, solid wood door that opens onto, not a foyer, but, an expansive furnished loggia and terrace, including one of only four private pools on the Amalfi Coast. With Poseidon’s Tyrranean sea set as the stage before you, and views of the town of Positano to the west, Villa Maura possesses all the elements of la dolce vita in pure Amalfitani style. 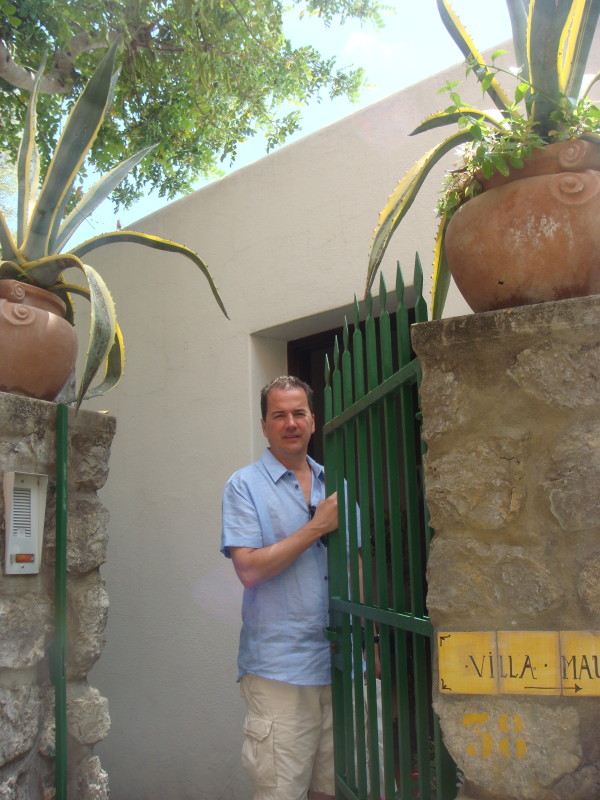 Villa Maura expresses the freshness and nonchalance of Amalftani style. Amalfi Coast interiors, while sometimes whimsical and eccentric, are rarely overwrought with the latest design trends. They are inspired by the colors found outside their windows – the yellow of their beloved lemon trees, the blue-greens of their sea, and the pinks and reds of their geraniums. For their love of al fresco style many of their interiors contain painted furniture to evoke a garden setting. Villa Maura’s interiors feel more sober than many of the colorful interiors along the Amalfi Coast, furnished with Italian country antiques and seating slip-covered in lemon yellow and sea green. There is a spare elegance inherent in what isn’t there, allowing the mind to wander and dream. It feels of the past, of another time, and therein lies its magical allure.

The narrow entrance is reached by one-hundred-and-fifty steps from the street above. Photo by Cristopher Worthland.

I am always fascinated by homes with history and the people who have lived in them – such as Franco Zeffirelli’s famous villa just below Villa Maura (which I cannot resist writing a forthcoming post about, if only for my own growing archives), Gore Vidal’s “Swallows Nest” set high up on the mountain in Ravello, and Rudolf Nureyev’s Isla Li Galli compound floating in the Tyrranean sea, in view from the terrace at Villa Maura. Little did I expect, however, that Villa Maura and its owners, Irish-born Maura Boylan Teissier, after whom the villa was named in 1980, and her late husband, Lucien Teissier, would contribute their own illustrious and quite glamorous history.

In one of the villa’s four bedrooms are walls of bookcases containing predominantly vintage international fashion magazines. With some sleuthing I came to the conclusion that Ms. Teissier had at one time in the latter 1950’s and 1960’s been a fashion model. Two striking portraits capturing her youthful beauty hang in the villa. 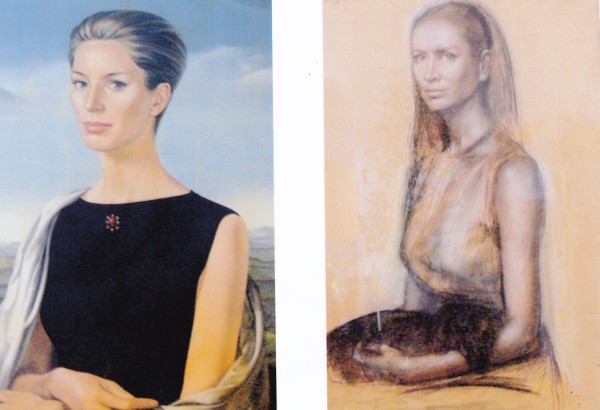 Two portraits of Maura Boylan-Teissier painted when she was in her twenties hang in two separate guest rooms at Villa Maura.

Ever more interesting, at least for me, was the discovery of a pile of Architectural Digest magazines, all of the same month and year: June 1981. Certainly, I thought, there must be something uniquely special and dear to Ms. Teissier in these pages to have saved a stack of the same issue. As I poured over the issue’s pages in search of signs of meaning I came upon an article titled Villa San Michele – A Charming Small Hotel in Tuscany. I immediately recognized this Renaissance-period monastery-cum-hotel in the hills of Fiesole overlooking Florence, with its dramatic facade attributed to Michelangelo, from my own near vintage issue waiting for me at home.  As I studied the pages I nearly fell out of my chair when I recognized that many of the furnishings and art were now living at Villa Maura. 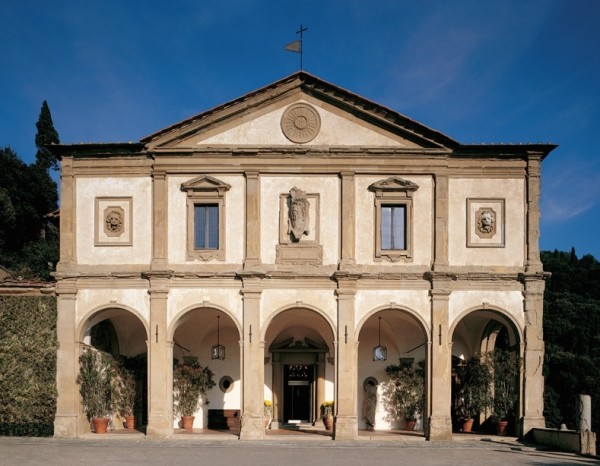 Villa San Michele in Fiesole, Tuscany, was constructed in the 15th-century. The facade is attributed to Michelangelo. Photo from the hotel’s website. 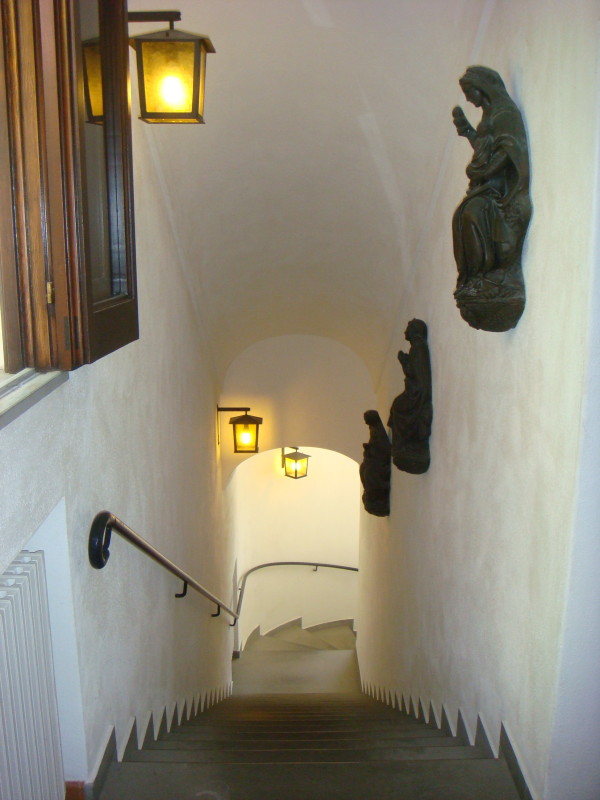 The vaulted stairwell leads from the entry down one level to the living and dining rooms, the kitchen and service areas, two bedrooms and the terrace. Photo by Cristopher Worthland. 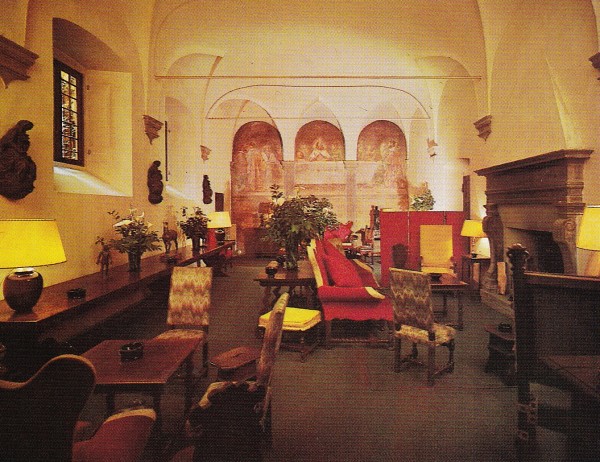 I immediately recognized many of the furnishing installed at Villa Maura from this photo of the library at Villa San Michele:  the bronze sculptures hanging on the wall at left are now lining the entrance corridor of Villa Maura, shown above. 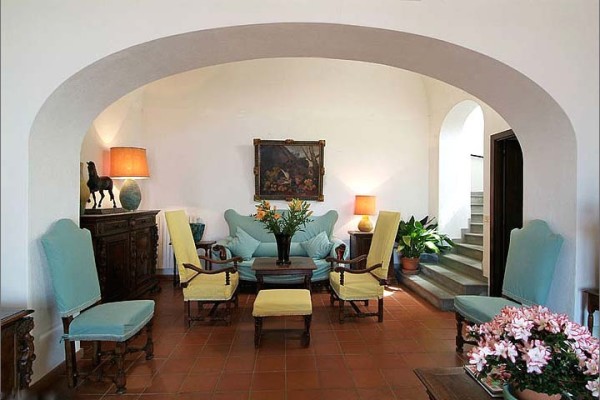 The stairway from the entrance spills into the salon, which is furnished with the same sober Italian antiques that furnished Villa San Michele’s library. The sofa has a new sea green slipcover while the chairs and stool wear the same yellow cotton covers. 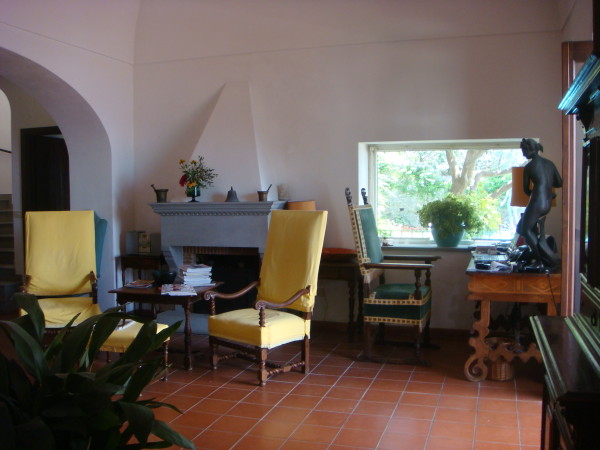 A view of the opposite side of the salon features a beautiful antique fireplace mantel. The two Tuscan armchairs with yellow slip-covers and table between them, as well as the desk and Renaissance-period chair, are from the library of Villa San Michele. Photo by Cristopher Worthland. 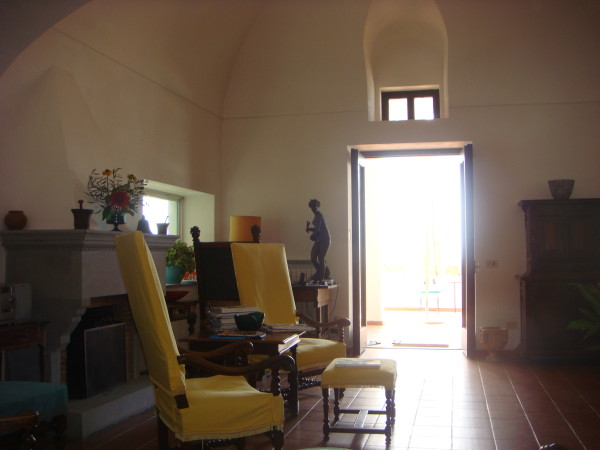 An alternate view of the grouping near the fireplace reveals a bronze sculpture that came from the library at Villa San Michele, visible on a table at the far end of the room, on the right, against a fresco by the Renaissance artist Nicodemo Ferrucci. Photo by Cristopher Worthland. 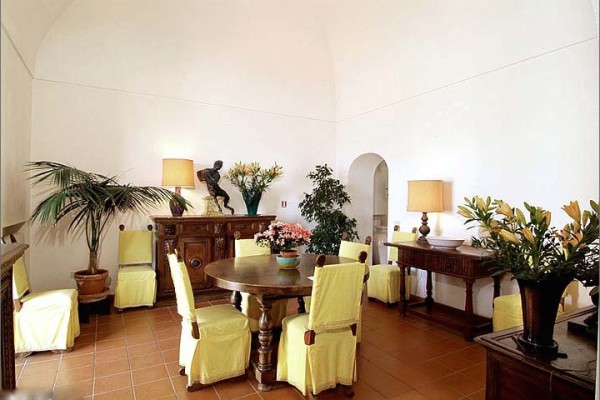 The dining room features Italian country antiques awash in light and lemon yellow. One of the several chairs shown here is featured in a seating arrangement at the far end of the library of Villa San Michele, then wearing a bold striped fabric of red, black and white. 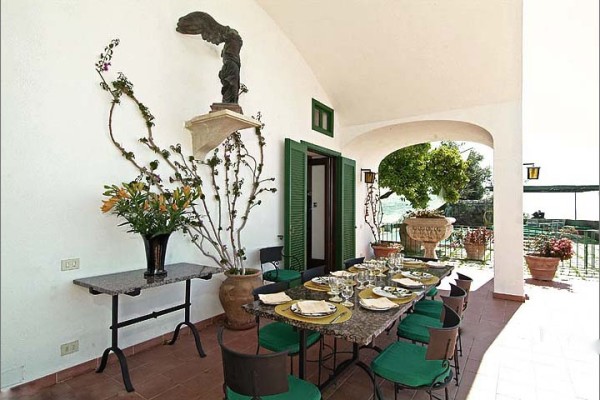 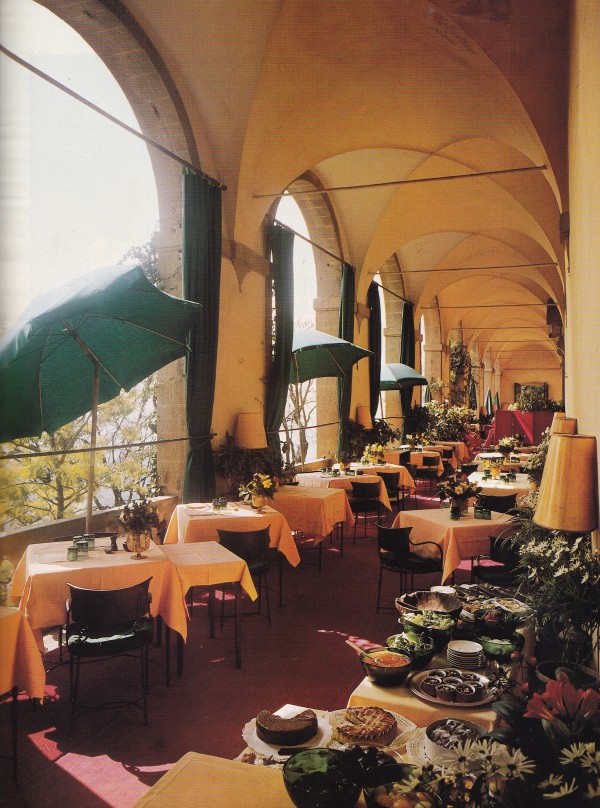 Here, in a courtyard bound by arcades, is where the font was placed prior to the Teissier’s move to the Amalfi Coast. Custom Etruscan-style garden furniture was commissioned for the hotel. 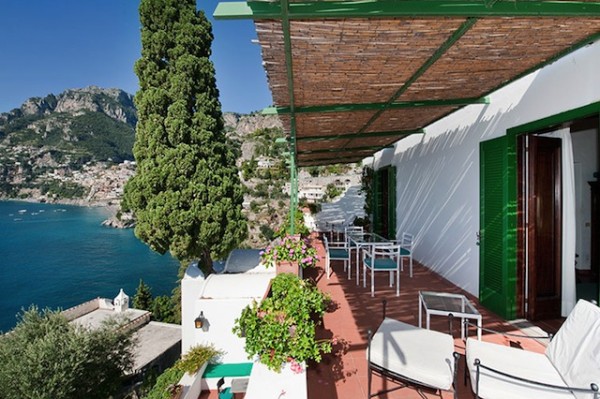 The Etruscan-style chairs with ottomans now grace opposite ends of the upper level terrace at Villa Maura. 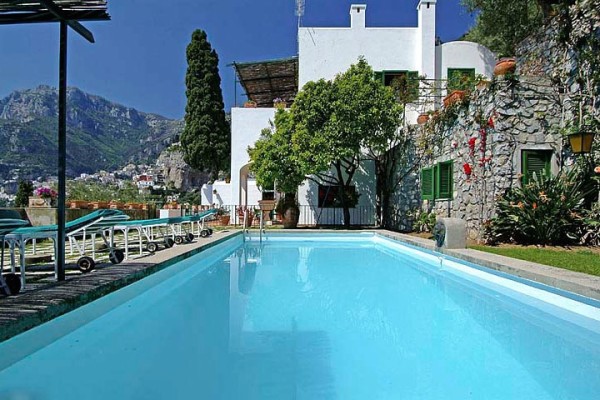 The pool at Villa Maura is one of only four private pools in Positano. 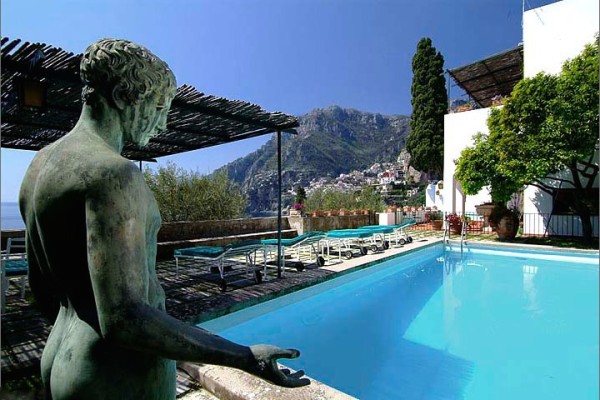 Walking with the gods … 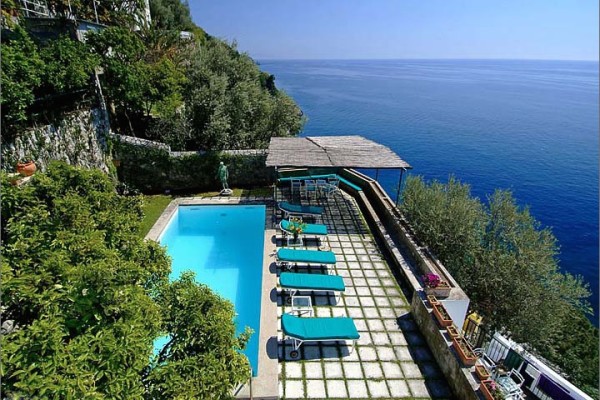 A view to behold and savor. 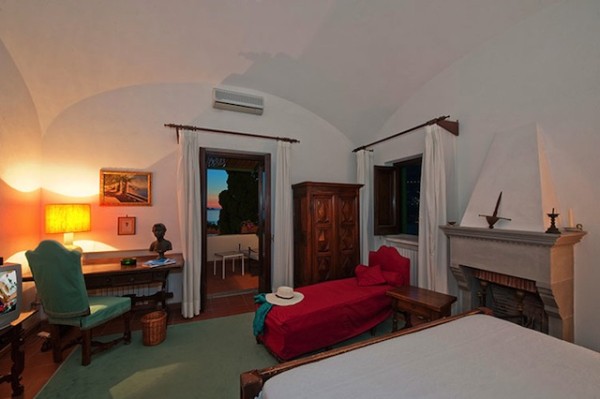 One of two upstairs master suites, each with access to the upper terrace, is furnished with pieces from Villa San Michele. 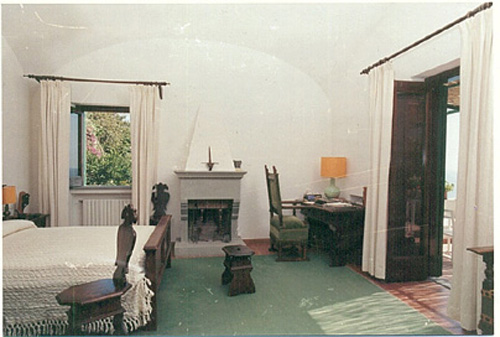 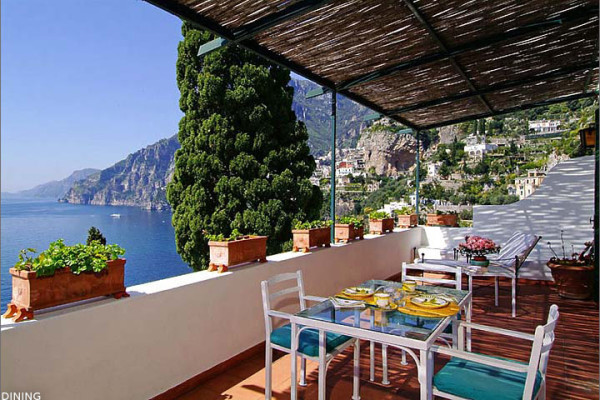 A terrace runs the length of the upstairs master suites with stunning views of Positano and Capri beyond. An Etruscan-style chaise longue from Villa San Michele is at the far end. 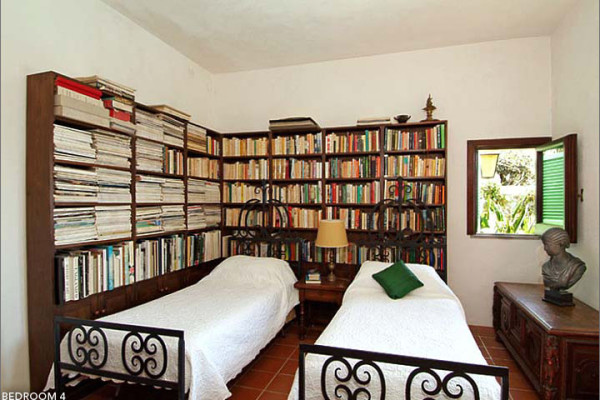 The downstairs bedroom where I found stacks of vintage fashion magazines and the Architectural Digest feature on Villa San Michele. 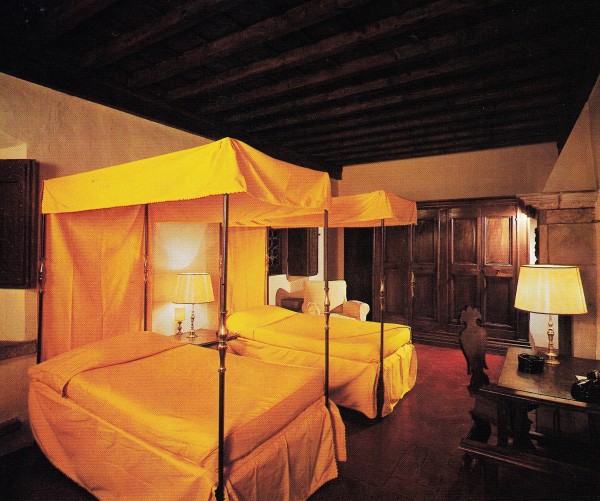 A guest room at Villa San Michele featured a pair canopied beds based on one depicted in Carpaccio’s The Dream of Saint Ursula. While many of the furnishings in this room made their way to Villa Maura the beds did not. 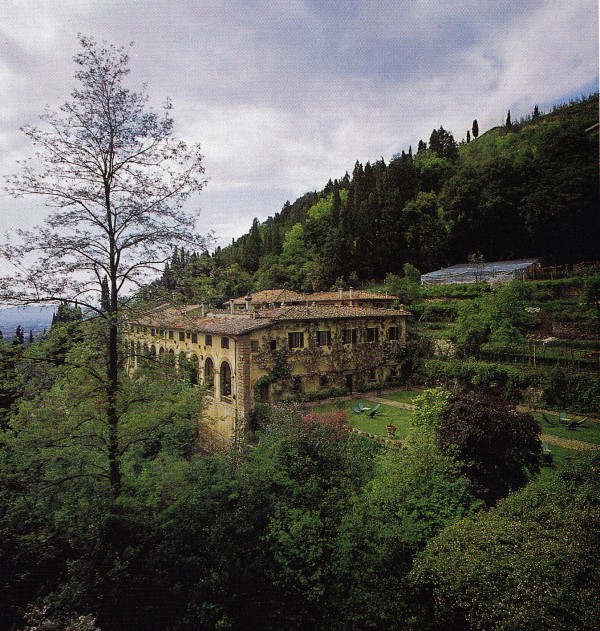 Villa San Michele as photographed by Robert Emmett Bright for AD in the 1980’s.

Villa San Michele has a fascinating history of its own. It is situated on a rocky ledge of a wooded hillside amid gardens and lemon groves, with stunning views spanning over Florence and the Arno River. It dates back to the 15th-century when it was conceived as a monastery for an order of Franciscan monks. In 1600 it was renovated and enlarged by the Davanzati family, giving it the appearance it presents today. Over the years it was used by member’s of Napoleon’s troops as a maison de plaisance until 1808, followed by an order of Benedictine nuns until 1817. At that time it was sold to a citizen who divided the structure into apartments. In 1900 New Yorker Henry Cannon purchased it but, unfortunately, bastardized much of what was great about this villa with the turn-of-the-century’s taste for Victoriana. Next followed occupation by both German and Allied forces during WWII. Following the war a group of pacifists took refuge, breaking up furniture for use as firewood.

Then, in 1950, it was discovered by Parisian Lucien Teissier, who dreamed of converting it into a private residence for himself. His desire was to return Villa San Michele to its former glory, but the immense expense eventually convinced him to instead turn it into a hotel with private apartments for himself and his eventual second wife, Maura Boylan. M. Teissier called on no other than the great French architect and designer Emilio Terry to collaborate with him on the villa’s restoration and decoration. Sourcing historical documents the duo sought out collections of 17th-century antiques from local dealers and designed or adapted pieces they could not find – such as the bright yellow canopied beds in one guest room, and the Etruscan-style wrought-iron garden furniture used in the loggia that eventually moved to Villa Maura.

The Teissier’s welcomed guests to Villa San Michele until retiring to Villa Maura in the 1980’s. The tale of two villas is a romantic journey of a lifetime by two remarkable people who shared a love for Italian culture, art and architecture, and for creating homes that eventually would be shared and available for people like myself to experience and enjoy. 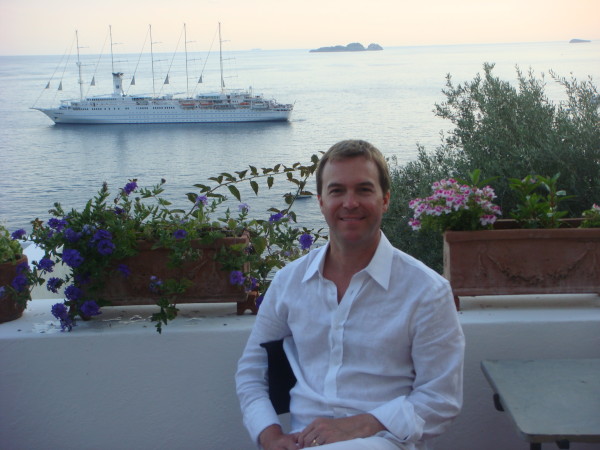 Photos of Villa Maura are from various vacation rental sites, unless noted as photographed by CW. Photos of Villa San Michele taken by Robert Emmett Bright for Architectural Digest, June 1981.

6 Responses to A TALE OF TWO VILLAS