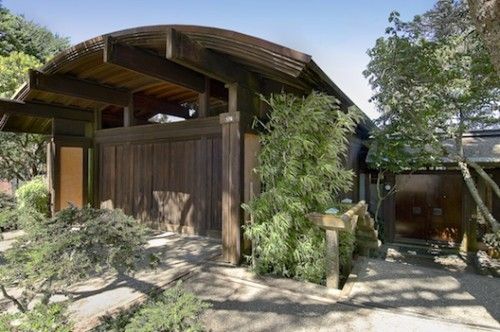 As a child of The Brady Bunch era, growing up in northern California, I was personally familiar with its penchant for redwood clad homes, having grown up in one. My father designed and built ours on the California ranch house model, made popular by architect Cliff May. It had banks of floor-to-ceiling undressed windows to open up the views and extend an indoor-outdoor quality of living, deep eves, and wood galore – doors, floors, windows, cabinets, beams and decks. The aesthetic was a derivative of early residential Japanese design, embraced at the turn-of-the-century by Green & Greene and Bernard Maybeck, and later by Frank Lloyd Wright.

In 1959 Dr. Cloyce Duncan commissioned architect Warren Callister to design a modern residence on a site in Clarendon Heights, a promontory on Twin Peaks in San Francisco, with breathtaking views over the city and bay beyond. Callister’s architectural program for Duncan House embraced Northern California Modernism, Japanese architecture, and Arts & Crafts. Callister employed the Wabi-Sabi concept derived from the Buddhist assertion of the three marks of existence. “At Duncan House, trios of wood and glass are used to create rhythm and visual texture while grounding the occupants among soaring 28-foot high ceilings. The views, taking in the cable cars and ferry boats in the bay, were Callister’s muse, leading him to conceive  contrasting horizontal and vertical heights and light-filled spaces to produce a sense of appreciation, awe and inspiration.” Duncan House was recently listed by Ackerman Realty  and subsequently purchased by interior designer and event planner Ken Fulk, as featured in the April issue of Architectural Digest. 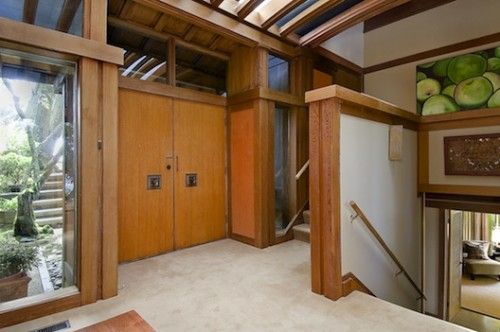 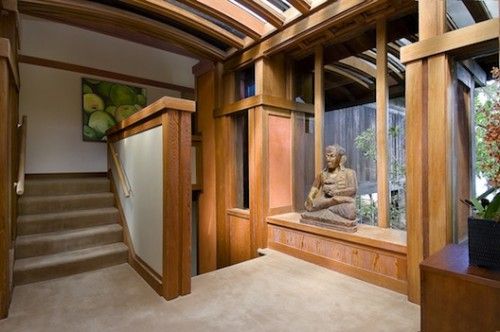 The entrance is located below side-walk level to allow for stunning views once the door is opened. Callister installed a barrel vaulted skylight to create a sense of awe and lightness amidst the profusion of wood. 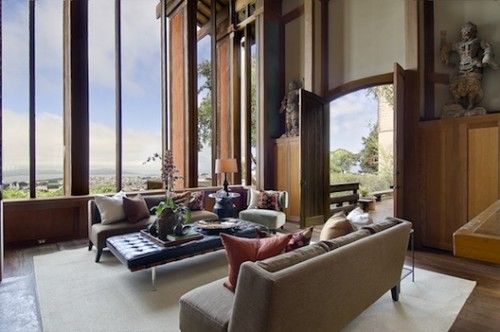 In photos taken by Ackerman Realty before its sale to Ken Fulk, two-story windows frame views over San Francisco and a cast-concrete fireplace framed in redwood lends a sense of boldness and balance.

Twenty-seven-foot-tall windows in the living room offer expansive views over San Francisco. Ken Fulk furnished this room in his new home with a vintage de Sede sectional sofa and a mid-century modern table and stool. The 1910 Steinway was originally owned by pianist Alfred Cortot. 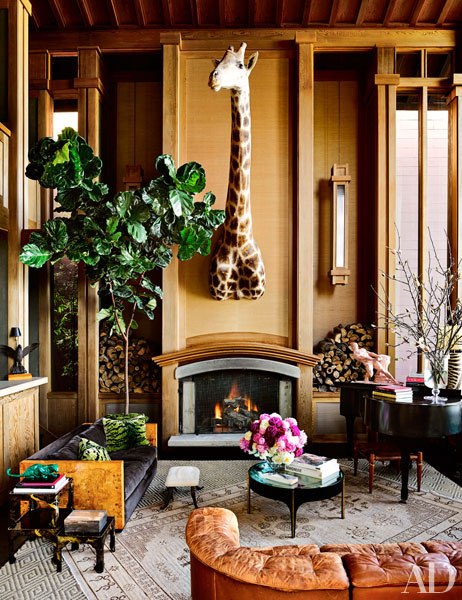 Fulk introduced rustic urban glamour into the interiors while preserving Callister’s architecture to produce the complexity originally intended by the architect: Callister considered the changing spatial proportions to evoke two moods – ‘party’ and ‘temple’. “Architecture”, he said,” is not building a shelter, but a mood, a feeling, a sense.” (Quote taken directly from Ackerman Realty) 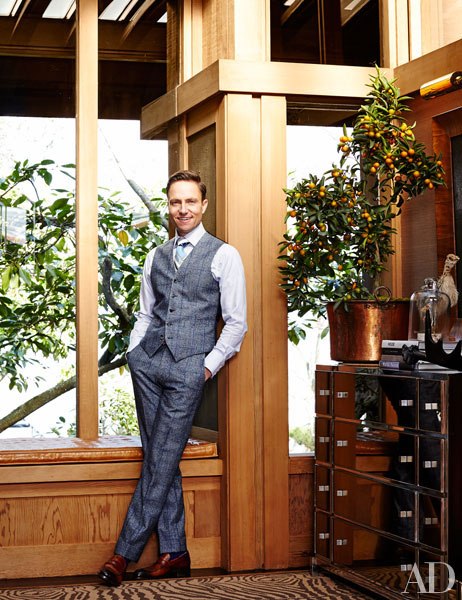 Designer Ken Fulk standing near a mid-century mirrored chest on a landing in his new home. 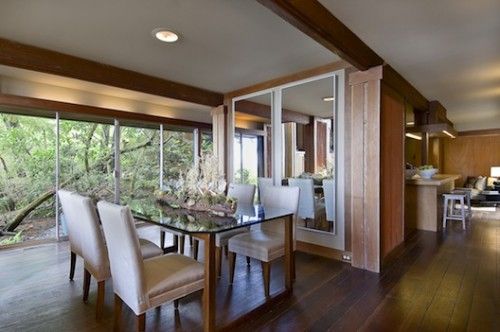 In a photo taken by Ackerman Realty the dining room flows into the kitchen beyond, filled with light from banks of windows bringing the outside inside. 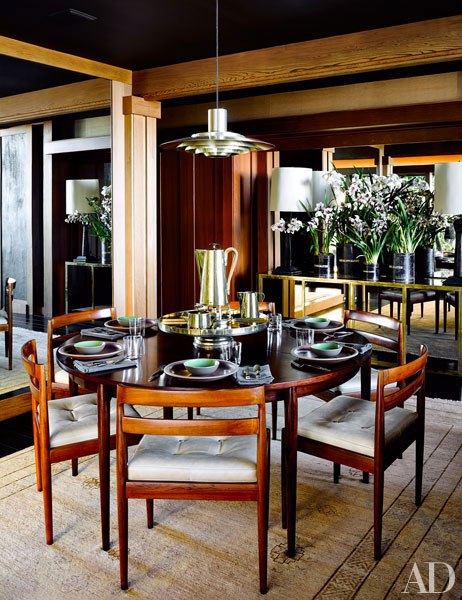 Fulk introduced mid-century modern classics and a does of glamour into his reincarnation of the dining room: Danish pendant light, table, and chairs as well as a mirror-and-brass sideboard by Jansen; the coffee service is a Tommi Parzinger design. 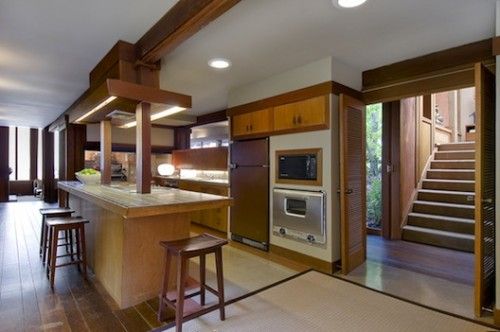 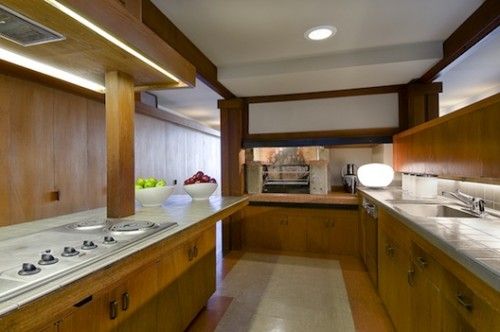 The kitchen, pre-Fulk, has an attractive and open layout. Refashioned cabinets, counters, appliances, fixtures, hardware and lighting will enhance its appeal while maintaining its architectural integrity. 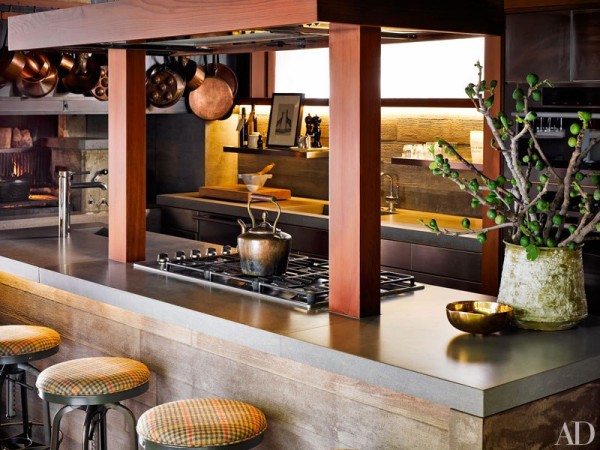 Fulk replaced the room’s wood island with one made of board-formed concrete to create contrast and interest. 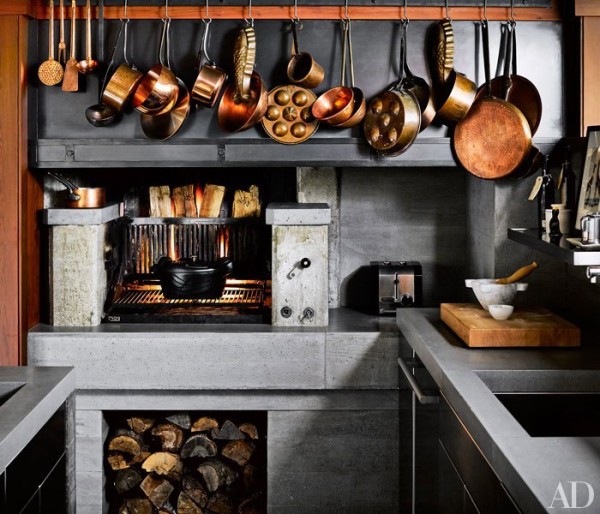 Vintage copper pots hang above the original wood-burning stove in the kitchen, where Fulk installed a custom-made blackened-steel hood and polished-concrete counters. 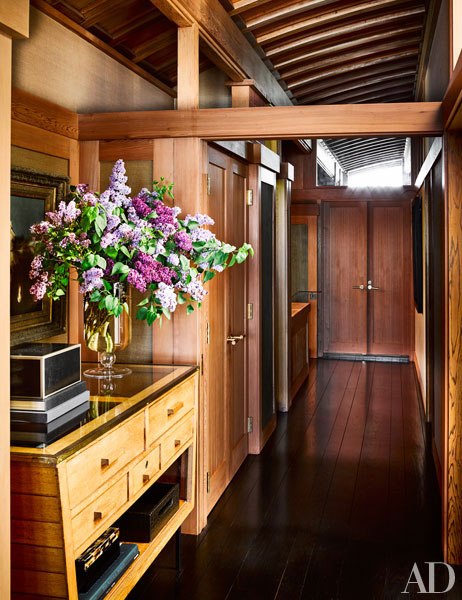 Fulk placed a mid-century French console into a niche in the hall. 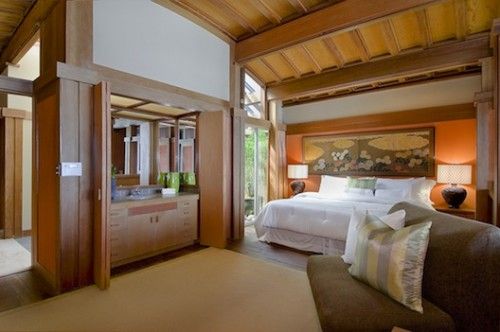 The master bedroom, pre-sale, was designed as a mezzanine to overlook the living room below and views beyond its 27-foot high windows, and shares the same barrel-vaulted ceiling. 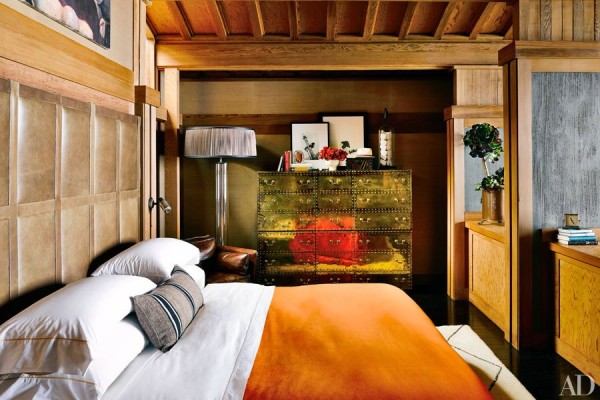 A foreshortened view of Fulk’s bedroom reveals an alcove in which he placed studded brass chests from India and a floor lamp made from a 19th-century glass tube. 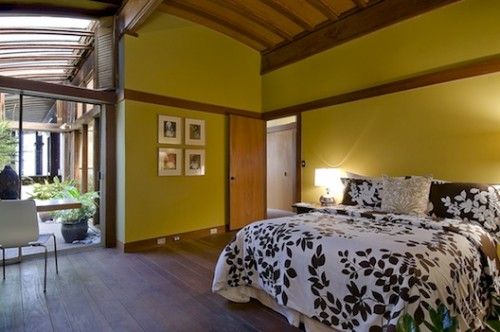 The guest room as it appeared on Ackerman Realty’s website features barrel vaulted ceilings and a view through an atrium to another room. 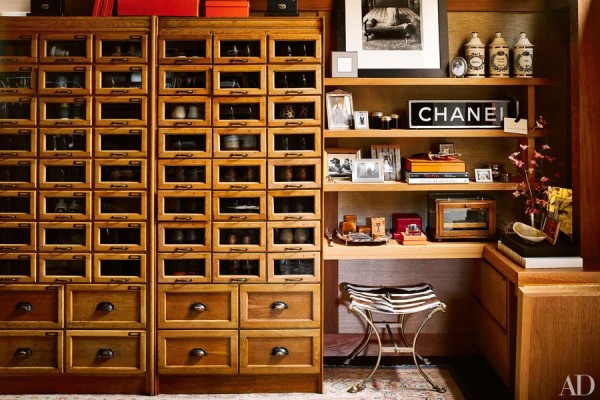 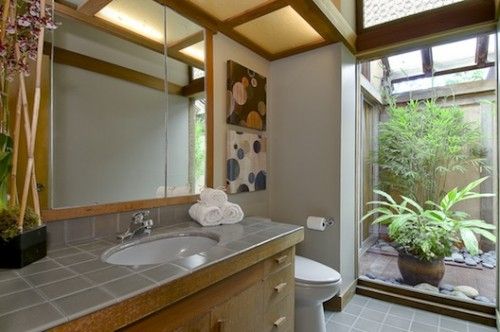 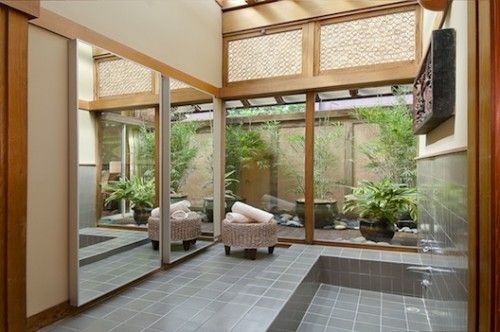 The original bathroom conveys a decidedly Japanese aesthetic by way of northern California.

Fulk reconfigured the layout and replaced the flooring, fixtures, lighting, fittings and surfaces with more luxurious ones to provide a more sybaritic experience. An antique brass mirror tops a vintage Moroccan tea table. 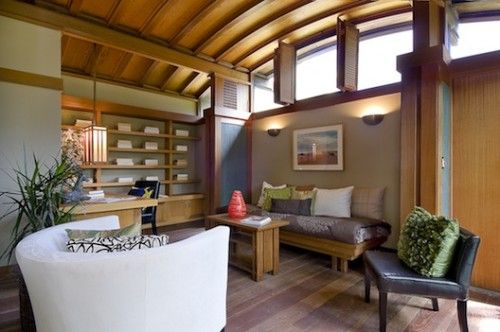 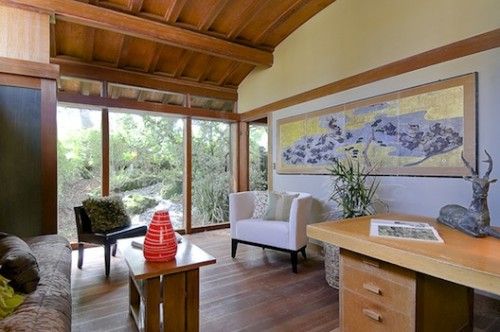 The office also boasts a barrel-vaulted ceiling and views open to woods in photos taken by Ackerman Realty.

A daybed that Warren Callister originally designed for an alcove in the office, as seen in the photo above, continues to take pride of place in Fulk’s office, now enlivened by leopard-print upholstery and a cashmere throw. 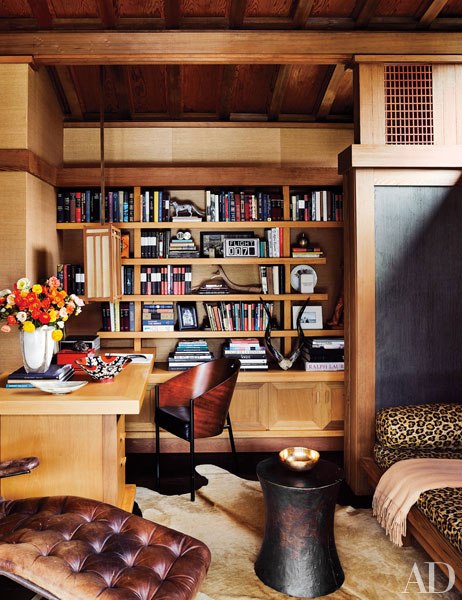 The redwood bookshelves and desk are original to the house. 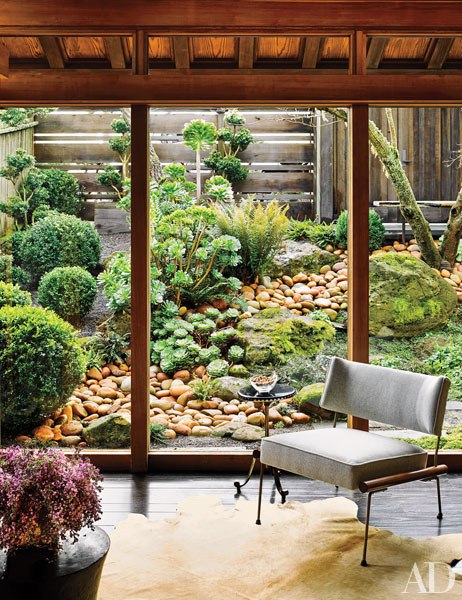 The office’s expanse of floor-to-ceiling windows looks onto a Japanese-inspired garden.

A lush tableau pervades the terrace, where flowering dogwood branches spill across an antique Japanese worktable partially shaded by a grove of Japanese maples in the Zen-inspired garden.