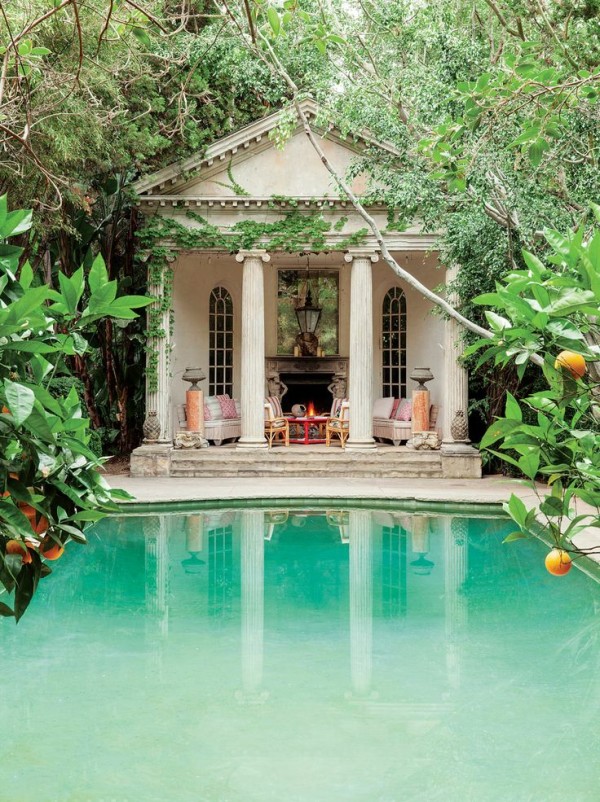 There is something particularly romantic and magical about pavilions. They illicit dreams of a well-lived life – a place to entertain, indulge fantasies, seek solace, and rejuvenate. They can be quite elaborate by design, imitating classical temples, Orientalist tents, Palladian villas, Venetian palazzi, Adirondack camps, modernist villas, and all manner of American architecture. The very nature of their size allows for the opportunity to express individual whims on a small scale … a bijou confection … a fantastical folly. Leave the quotidian life behind and join me on a tour of some remarkable pavilions designed with their sights on water, private havens in which to entertain, relax and, in some cases, house guests. 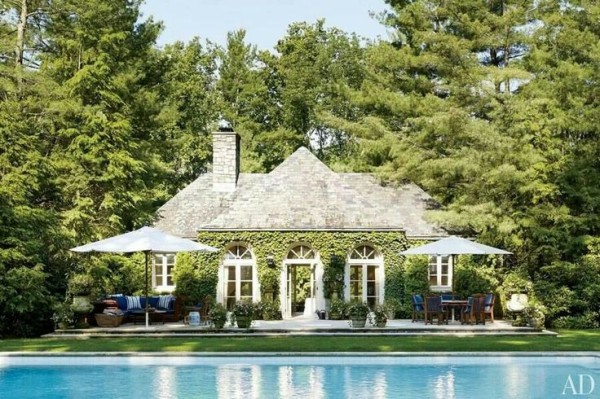 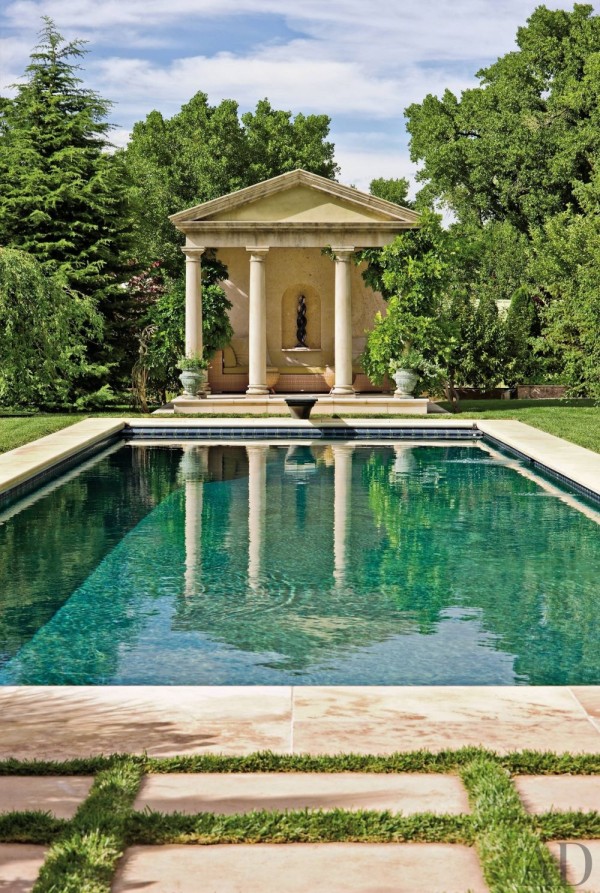 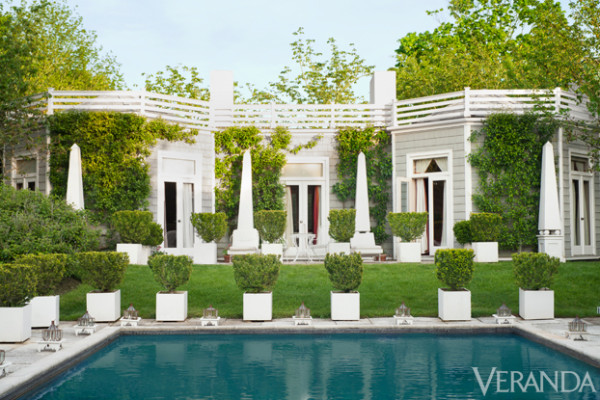 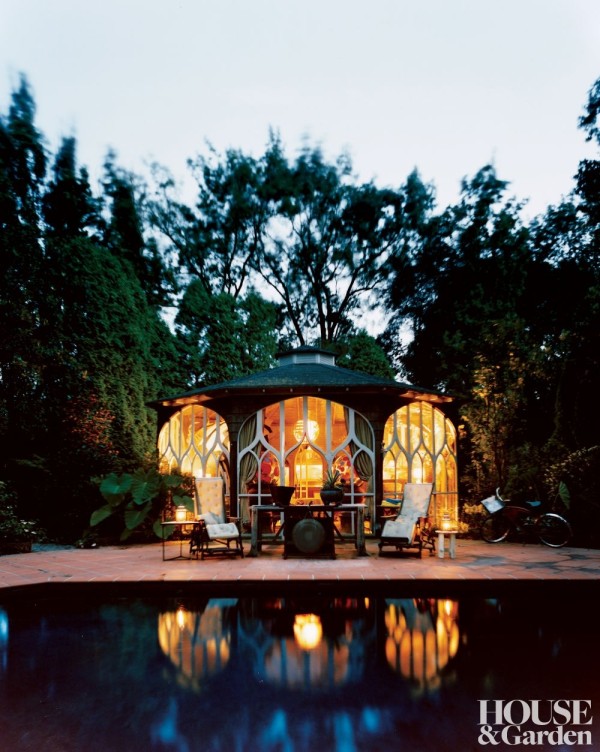 The pool pavilion of a Southampton, New York, property — lit like a lantern — serves as a guesthouse or reception area for parties. Bill Sofield arranged antique mahogany invalid chairs poolside, and an Indonesian teak table and a gong rest between them. Photo by Martyn Thompson. 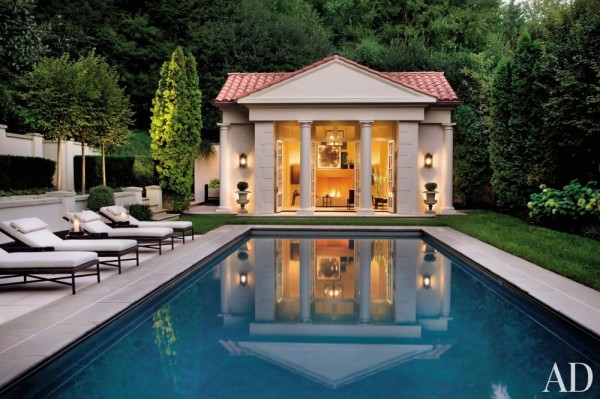 DCA Landscape Architects created the rear garden of designer Thomas Pheasant’s Washington, D.C., home. Although Pheasant designed the poolhouse with a classical façade, he used stucco for the walls and Spanish-style tiles for the roof. Photo by Durston Saylor. 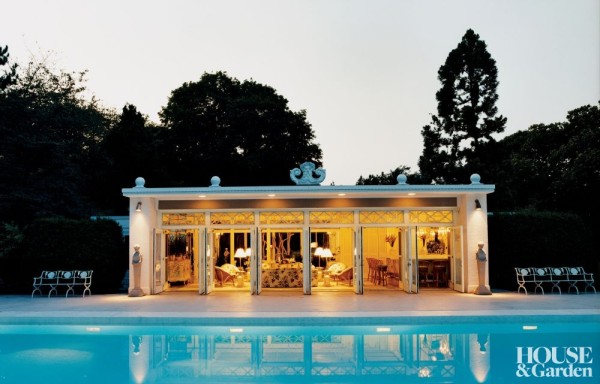 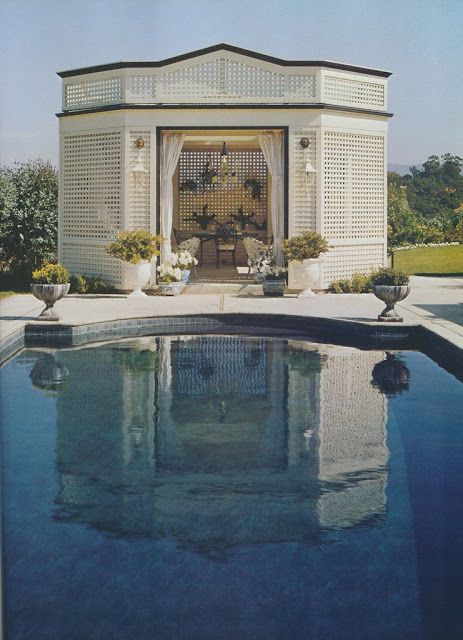 Jack Lowrance conceived a pair of lattice pavilions for al fresco entertaining on the property of a Woodside, California, home in the 1970’s. Photo by Max Eckert. From Architectural Digest: California Interiors, 1979. 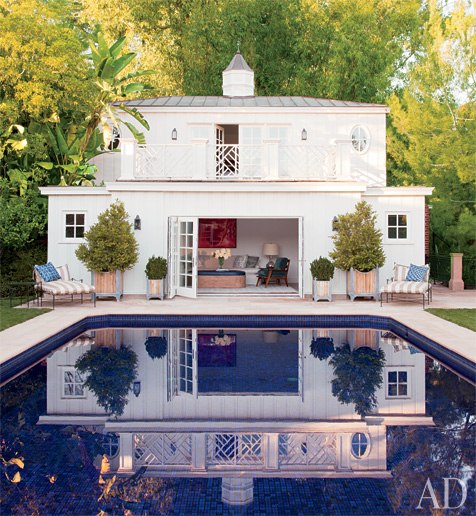 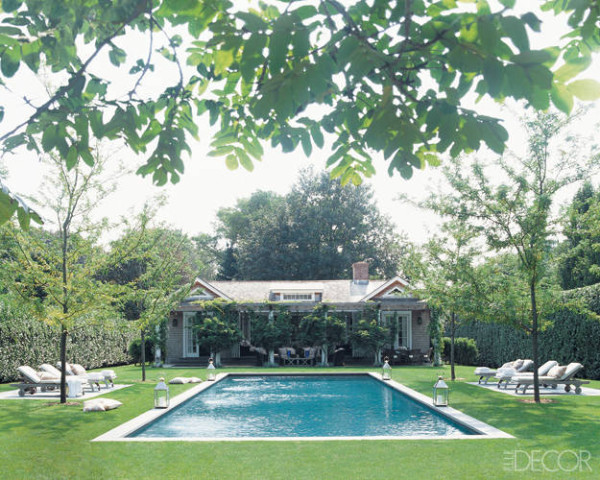 Steven Gambrel designed a restrained poolhouse based on a classical model for his previous Sag Harbor home. Photo by Tim Street-Porter. 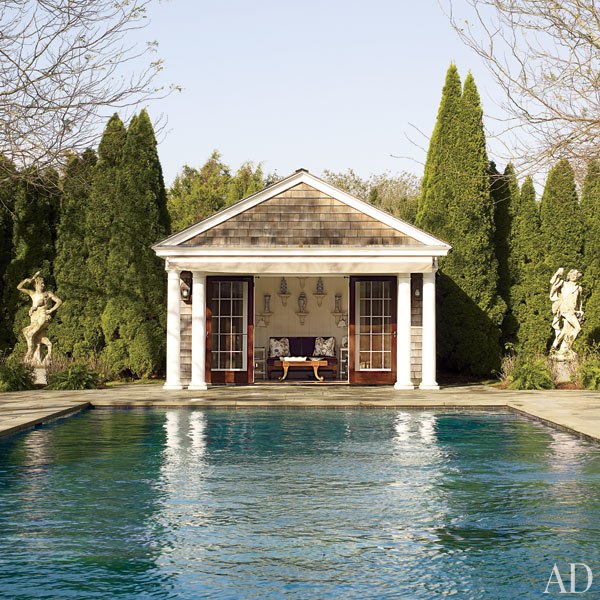 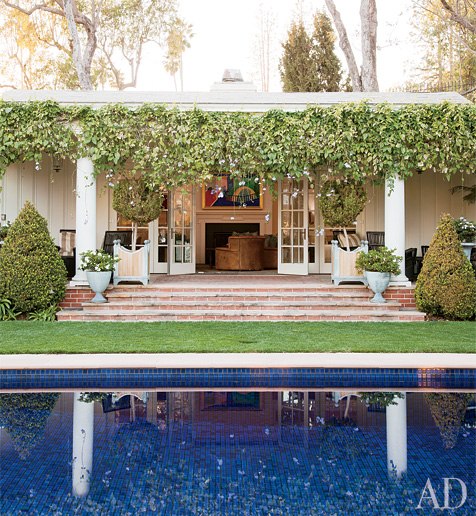 A loggia off a screening room overlooks the swimming pool of a house in Beverly Hills. Photo by Roger Davies. 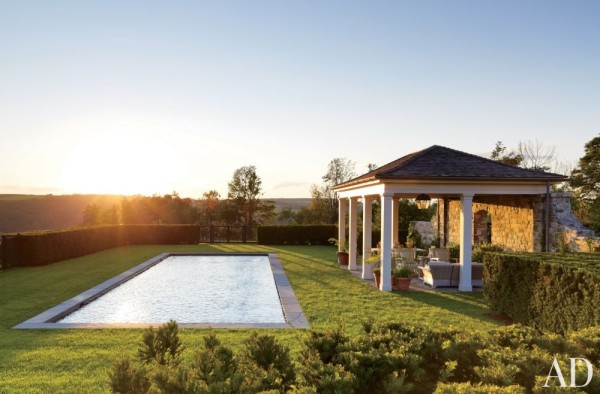 A columned cabana is situated alongside the discreet swimming pool at a Dutchess County, New York, farmhouse designed by architect Gil Schafer. Photo by Eric Piasecki. 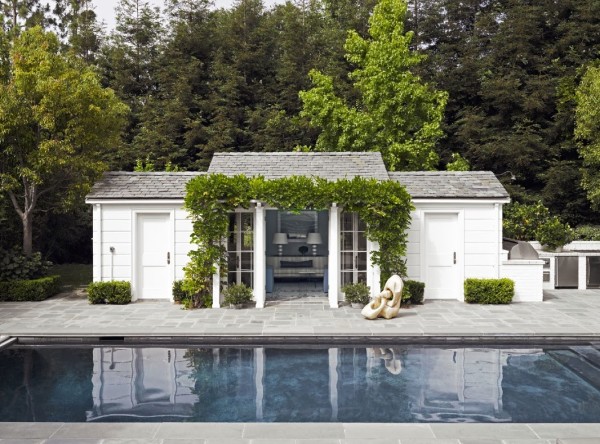 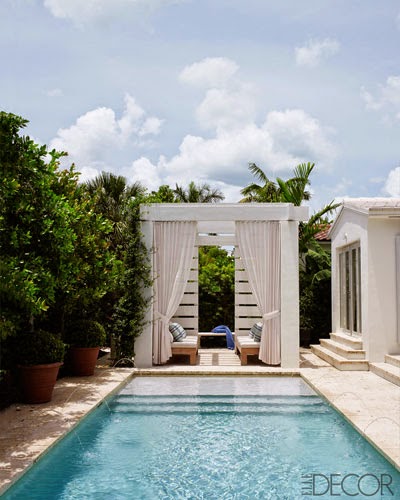 Carlos Aparicio crowned the entry to his lap pool with a classically-inspired draped lounge. Photo by Richard Powers. 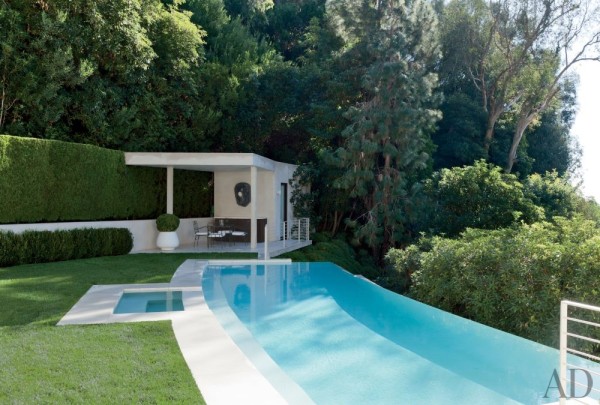 The 1960s Beverly Hills home of Waldo Fernandez was upgraded with a new limestone pool and poolhouse. Photo by Roger Davies. 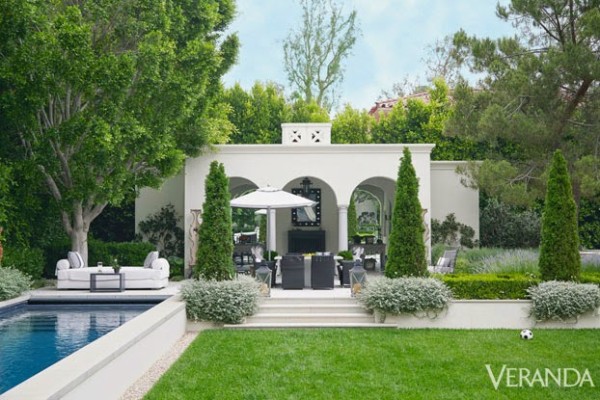 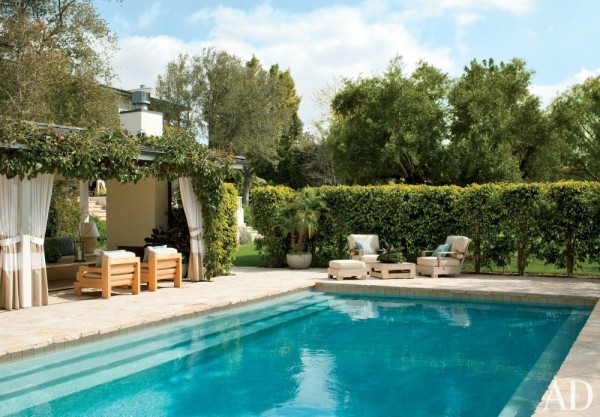 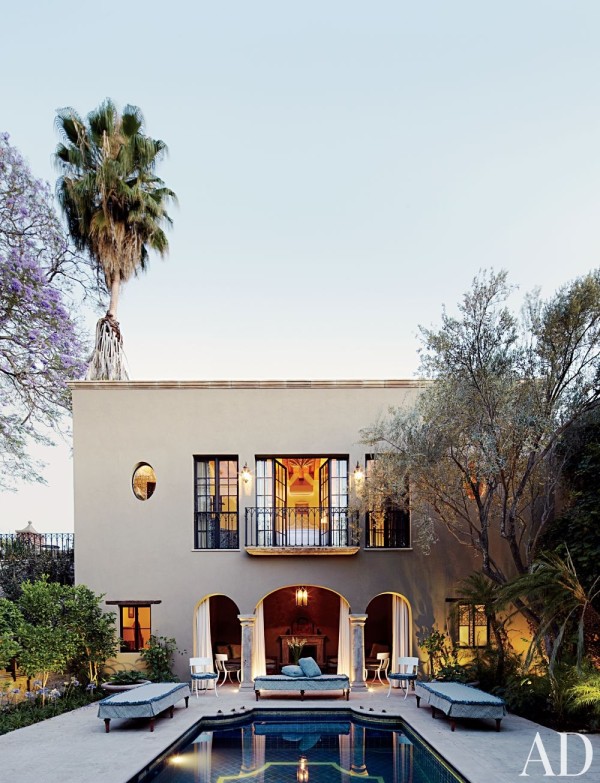 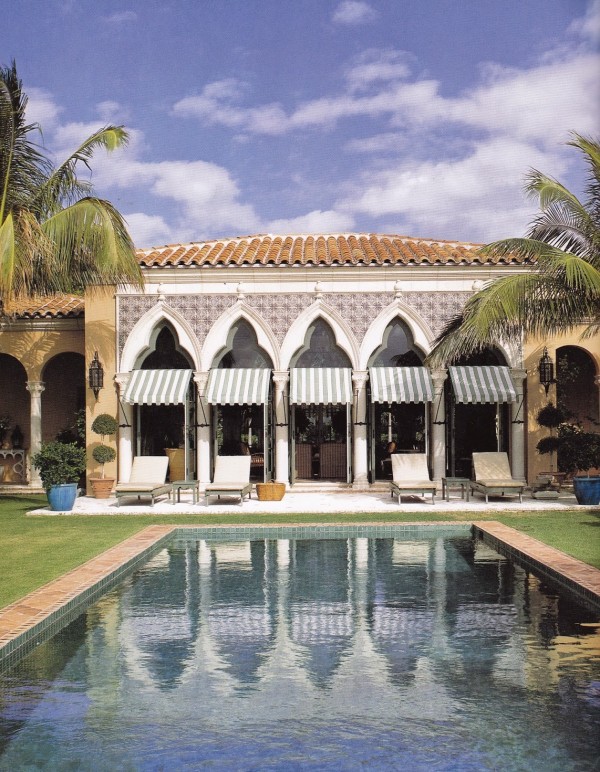 Liz and Damon Mezzacappa’s Palm Beach pool was inspired by a design they found in a book on Moroccan style designed by architect Jeffery Smith. Photo by Fernando Bengoechea for Town & Country. 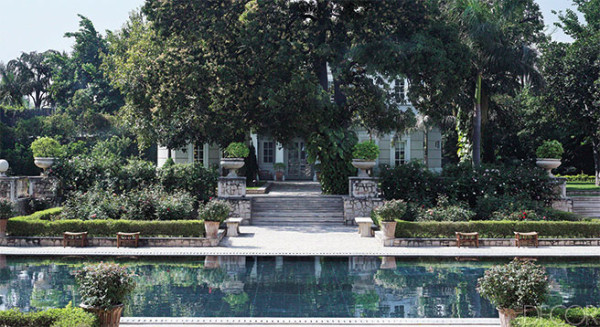 Indian limestone steps lead to the poolhouse on the property of a residence in New Delhi, which is surrounded by rose bushes; Deniot designed the limestone benches and teak stools. Photo by Richard Powers.

A lavish yet modestly scaled pleasure palace designed by Todd Black for model, actress and writer Veronica Webb and her family in Key West, Florida. Photographed by Ken Hayden for Architectural Digest. 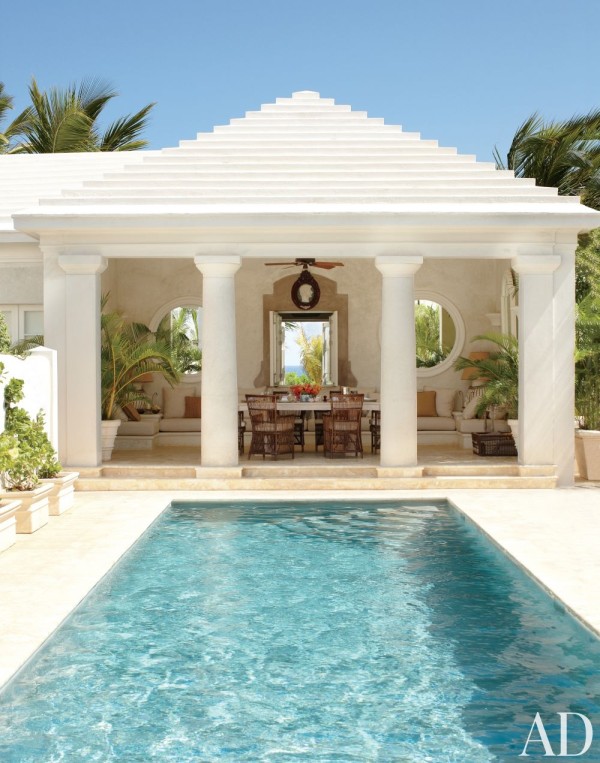 The poolhouse of an estate in the Dominican Republic decorated by Genevieve Faure references classical design with Doric columns and a stepped roof. Photo by Oberto Gili. 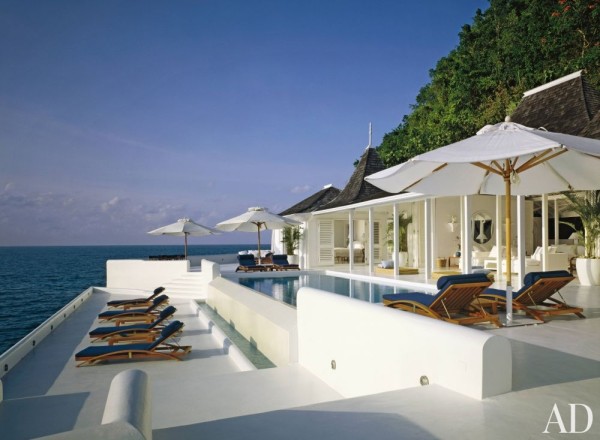 Ralph and Ricky Lauren expanded the pool deck of their Jamiaca guesthouse. The beach house is “like being on a boat,” notes Ralph. Photo by Durston Saylor. 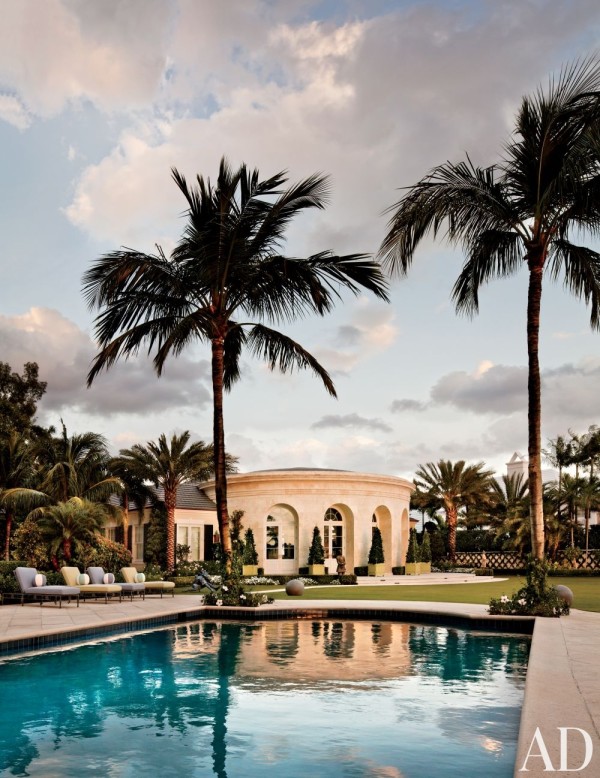 Architect Thomas M. Kirchhoff designed the pavilion at a Palm Beach residence. The gardens are by Nievera Williams Design. Photo by Scott Frances. 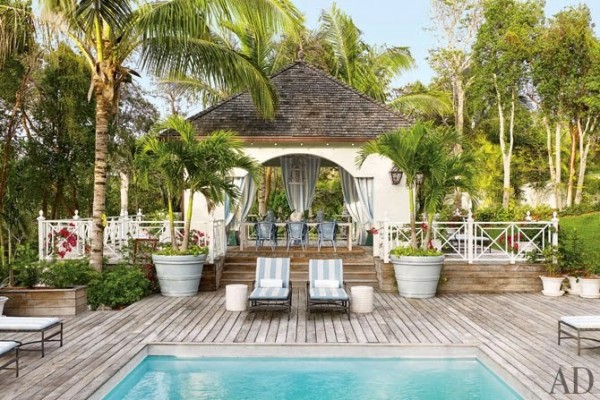 Miles Redd created a raised dining pavilion near the pool of a client’s vacation home in Lyford Cay. Photo by Björn Wallander. 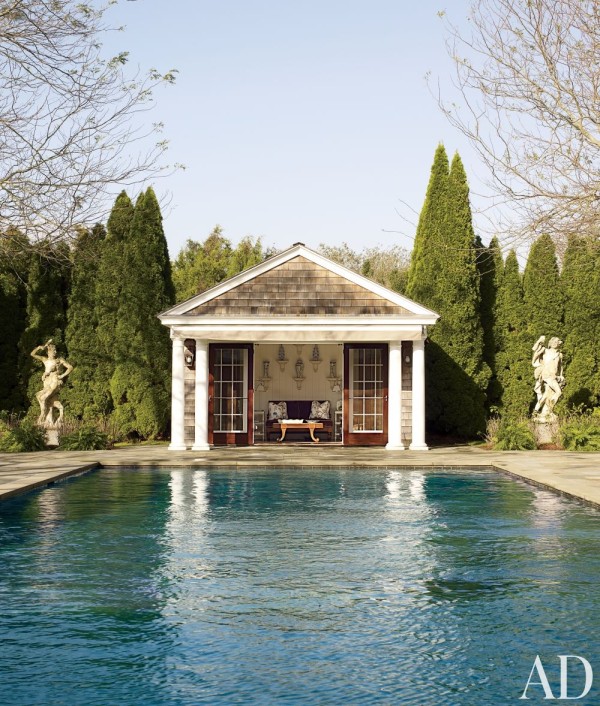 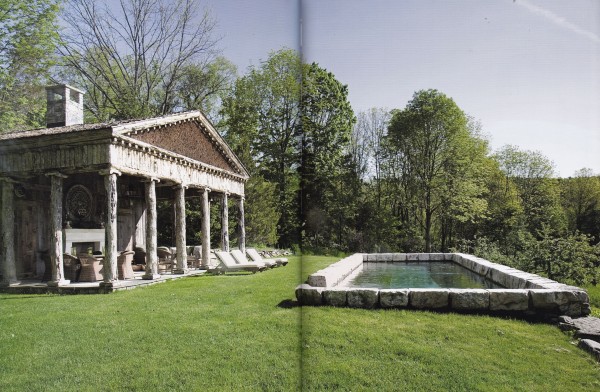 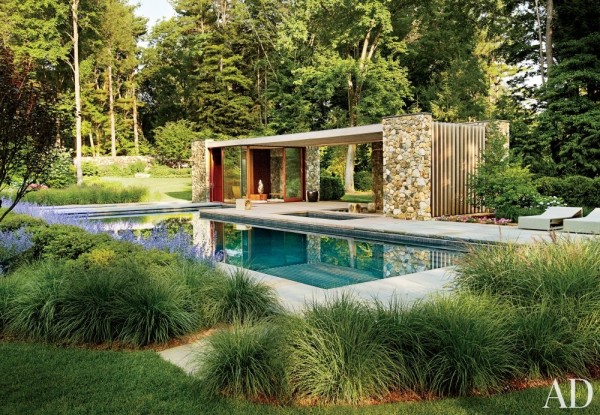 A poolhouse in Westport, Connecticut, designed by the New York City architectural firm SPaN, is distinguished by fieldstone walls and a slatted cedar pergola. Photo by Adrian Gout

At the beach retreat of Coach president and creative director Reed Krakoff and his wife, Delphine, in Southampton, New York, the modernist pool and poolhouse reflect the clean-lined 1970s style of the main house. Photo by Reed Krakoff. 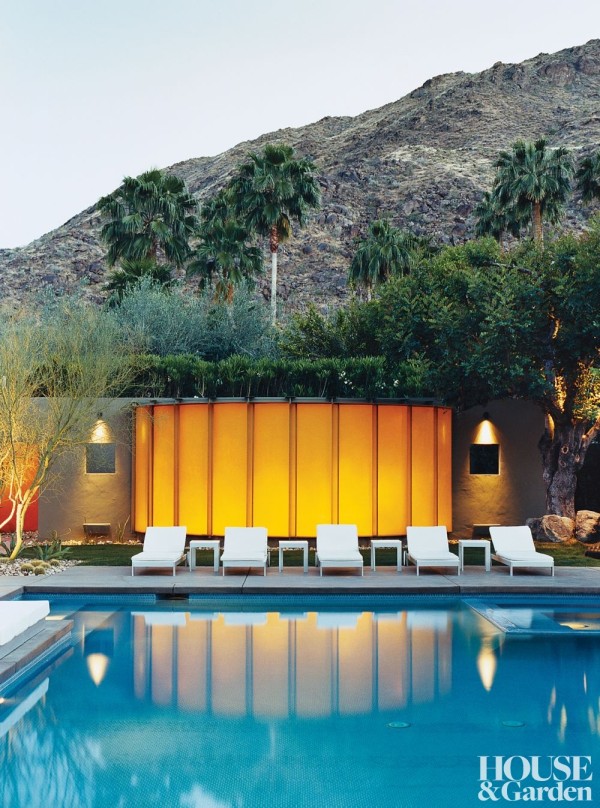 Lit from within, the fiberglass-paneled pavilion on a Palm Springs, California, property glows like a lantern, creating dramatic reflections in the pool. Photo by Marc Ware. 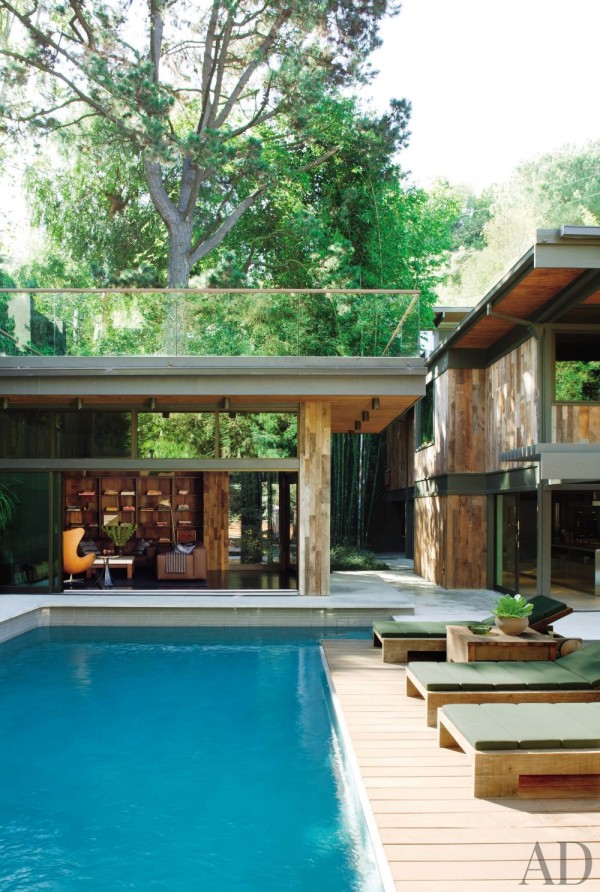 In a related post, Liquid Assets, myriad styles of swimming pools are featured from across the globe.