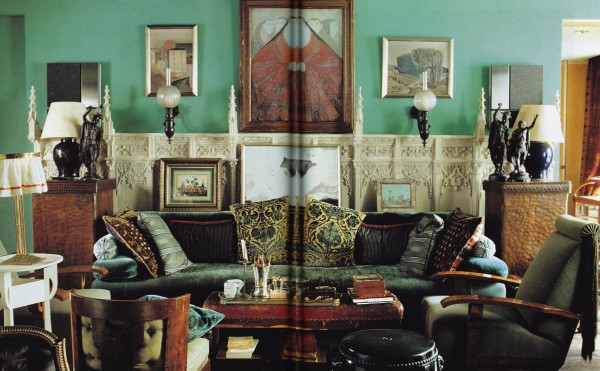 With great consideration I’ve made the decision to alter the format of future posts. Due to the exorbitant number of hours I dedicate to producing one article – the research, scanning of images, and writing involved – I have decided instead to dedicate each post to one sublime and inspiring room, as the title of my blog suggests: The Art of the Room. This will not only allow me to post with more regularity but, more importantly, allow me to balance design projects, the running of my antiques shop, art making, and life commitments more readily and enjoyably. I view my role as a curator of the best in interior design and decoration, and I will continue to share the many photos that accompany a project and its back story. Rather than writing detailed descriptions and personal revelations for each image I will  instead wax poetic over one singular and sensational room, following it with associated imagery and brief descriptions, if necessary and interesting. An admitted interior design-aholic, I personally would not appreciate being taunted by one mere image of an enviable dwelling, so rest assured that I will continue to provide as many images associated with each interiors project as possible. Now … let’s get on with the show! 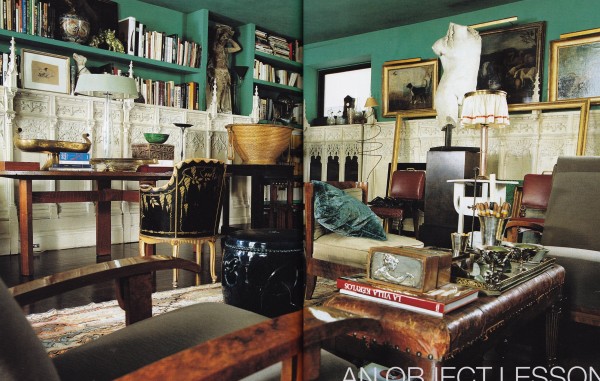 The room featured in today’s post is the sitting room of antiques dealer Maroun Salloum, as featured in the May issue of The World of Interiors in 1999. Located in the area of Paris known as the Carré des Antiquaires, between quai Voltaire and the boulevard Saint-Germain, his address comprises his home, a shop, storerooms and a showroom — assuming he still resides at this address. According to Google his gallery, Maroun H. Salloum, remains at 17 bis quai Voltaire. Other than an exceptional article written by The Polyglot, there is little to be discovered about this inveterate collector.

I find the arrangement in M. Salloum’s sitting room to be particularly arresting: a confection of neo-Gothic paneling painted white is set against walls drenched in viridian, serving as a refreshing foil to a rich collection of antiques, textiles and objets d’art. Though literally absent, an Orientalist mood prevails that hints at the discovery of magical treasures, as with Aladdin’s cave. And no wonder, given that the Lebanese M. Salloum spent his childhood in Beirut, where an embarrassment of riches from the Ottoman Empire, China and 19th-century Europe converged.

M. Salloum’s panoply of eclecticism is informed by his particular interest in Seccesionist stlyles, from Prague to Glasgow, Budapest to Brussels, and New York to Vienna via Berlin, along with an affinity for French design – an attractive and pleasing cohabitation of the Modern and Romantic, masculine and whimsical. In the top photo the facing wood framed chairs with tassled bolster head-rests was designed by the Budapest Secessionist Lajos Kozma. The red portrait behind the sofa is by Theodore Rouault; the canvas below was painted in 1928 by Miçao Kono. In the second photo the black lacquer and gilt wood chair is by a pupil of Armand Albert Rateau. A Greek torso from the 3rd century injects a classical note, while the 17th-century stool adds a Chinese one. The entire room is wrapped in 19th-century Spanish neo-Gothic paneling, originally oak, that once covered the walls of the apartment of the prince-bishop of Barcelona. The sumptuous sofa is covered in Italian velours de soie. Scattered throughout are unusual oddities, such as the gold painted rattan bowl on the writing desk – a jardinière with Chinese-style handles made at the turn of the 20th-century.

Though chockablock with collections and unusual pairings, M. Salloum’s deft hand at arranging attractive and compelling compositions owes itself to a harmonious blending of color, periods, styles, and objects, and an eye for classical proportions and balance, as witnessed by the symmetrical arrangement of furniture, lighting, art and objects. 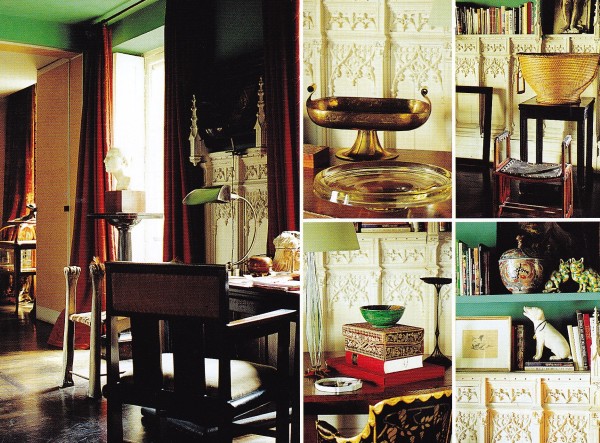 The marble head in the window is Mademoiselle Zina by Françoise Pimienta, 1917.  A beaten copper cup by Henryk, a gold-painted bowl, a European 17th-century dog, and a Turkish box topped by a Chinese cup completes the collage of images. 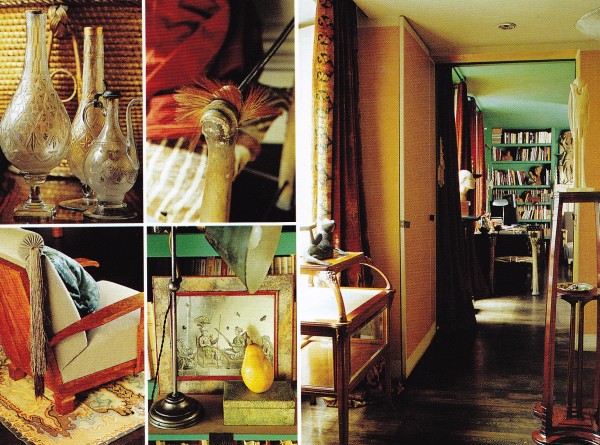 In this collage of images are glassware from Turkey, a detail of a giraffe and zebra chair, the entrance hall, a pear used in science studies on a shagreen box, and an armchair by Kozma.

A pair of armchairs designed by Marcel Coard (c. 1925) frame a metal rams head washbasin designed by Zsolnay in Hungary in 1904. 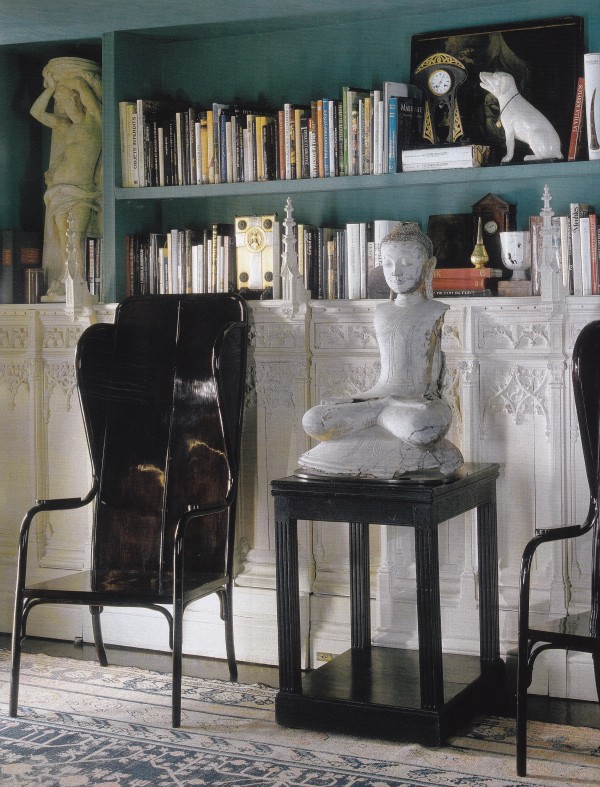 A pair of fauteuils designed by Joseph Hoffmann (1905) flank a Cambodian Buddha from the end of the 17th-century.

2 Responses to One Singular Sensation