“The biggest secret of E.1027 is that it offers spaces for secrets, having layers of interiors within its interiors.” –Katarina Bonnevier

Villa E.1027, Eileen Gray’s modernist 1929 villa in Roquebrune-Cap-Martin on the French Riviera, opens to the public with great fanfare thanks to a complete seven-year renovation made possible by the Friends of E.1027 and two soon-to-be-released films staring the villa. A biopic titled The Price of Desire will take us back to the year 1929 when Gray settled into her new villa. Filmed on location, the freshly restored interiors serve as a backdrop for the intellectual avant-garde that weaved in and out of her life. Florid murals painted by Le Corbusier, often in the nude, are present despite Gray’s outrage toward him for painting them in her absence, without her permission. In fact, Gray was so infuriated she would never again return to E.1027, building a second villa along the French Riviera, Tempe A Pailla, in 1932. The film further delves into Gray’s relationship with her lover, the chanteuse Damia (played by Alanis Morissette) and her professional and private relationship with Jean Badovaci, the architect and editor of the avant-garde magazine L’Architecture Vivant. Another film, a documentary titled Gray Matters, will delve into Gray’s enduring and formidable place in the annals of high modernist genius. You can read the full story, written by Jean Bond Rafferty, in the March 2014 issue of Town & Country. 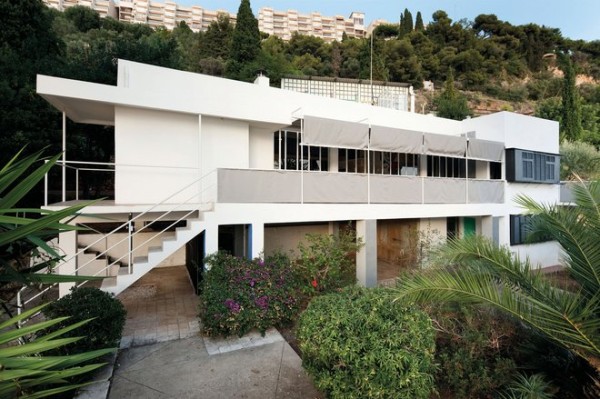 Villa E.1027 as it appears today. Photo by Manuel Bougot.

E.1027 was designed with privacy as a premier objective, as a refuge and haven from the discriminating and often ridiculing eyes of mainstream society. Sited on a secluded bluff overlooking the Bay of Monaco, Gray embraced the modernist vernacular of this eras great innovators while insisting on interiors that were equally seductive and comfortable – not merely intellectual spaces designed to please the eye. Her iconic Transat chair (inspired by deck chairs) and Bibendum chair (inspired by the roly-poly Michelin Man), telescoping tubular steel tables, and a propensity for folding screens, informed luxe moderne interiors with beds as sofas for lounging. Furthering her penchant for secrecy guest rooms could be accessed via private entrances. There is something particularly soothing about these rooms, awash in light with graphic shots of indigo and black against a chalky white background. You can almost feel the sea breezes and scent of mimosa wafting through Gray’s vision of a holiday respite never quite actualized as she had dreamed it to be. The murals and Le Corbusier would remain (Le Corbusier, in a cabin he designed directly above E.1027) yet life at E.1027 was not to be: Le Corbusier would meet his untimely death in the bay, likely eying Gray’s villa one last time. 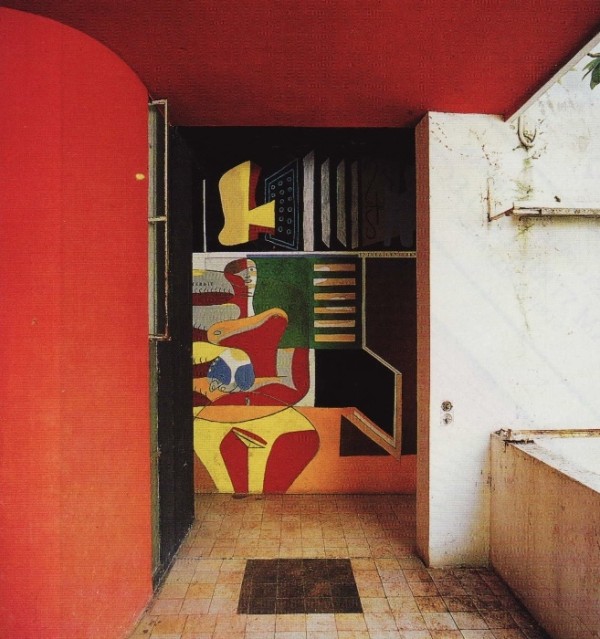 Le Corbusier altered the entrance of Gray’s villa by painting over her mural with his own. Photo courtesy Foundation Le Corbusier.

The main salon as it appeared in the late 1920’s, featuring Gray’s Transat and Bibendum chairs . Photo from L’Architecture Vivante, c. 1929. 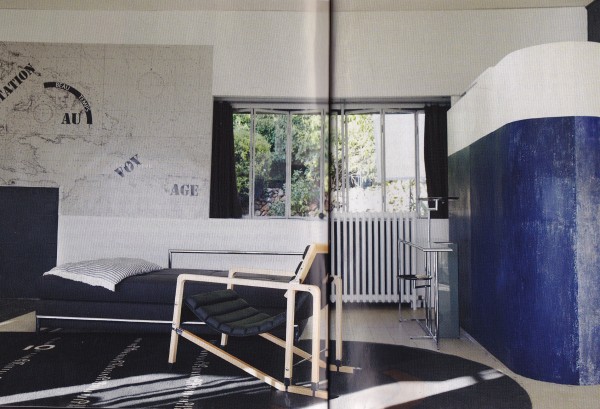 The salon as it appears today with its restored nautical map and her Black Board rug. Photo by Simon Watson. 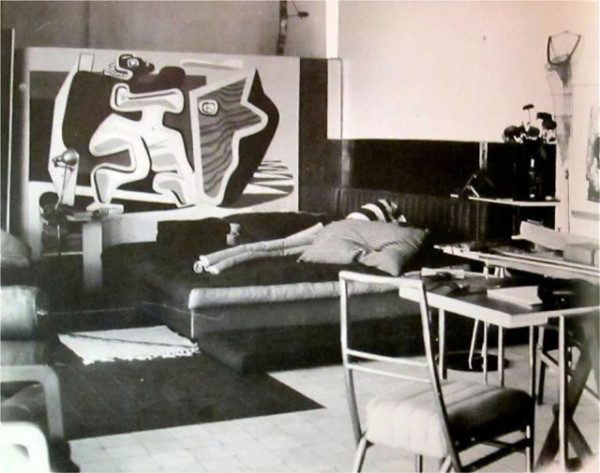 A later vintage view of the salon with the addition of a mural by Le Corbusier. Photo from Eileen Gray: Her Life and Work by Peter Adam. 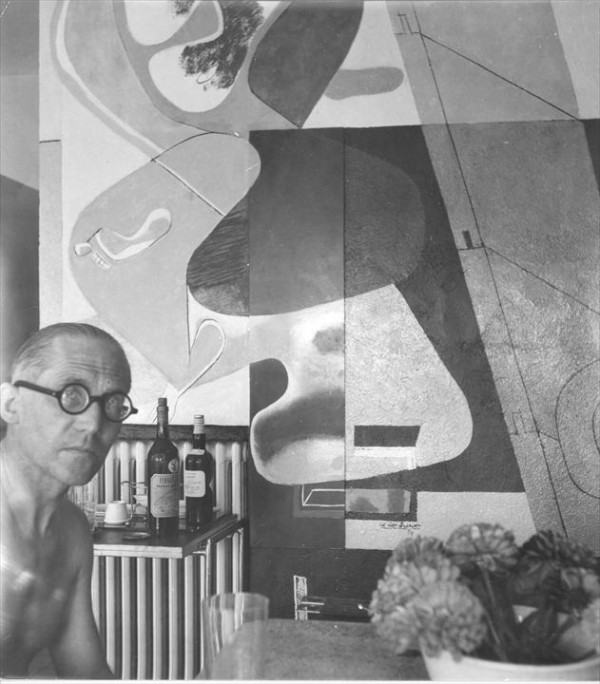 Le Corbusier posing in front of his mural. From Eileen Gray: Her Life and Work by Peter Adam.

Le Corbusier lounging on the salon’s bed in front of his mural. From Eileen Gray: Her Life and Work by Peter Adam. 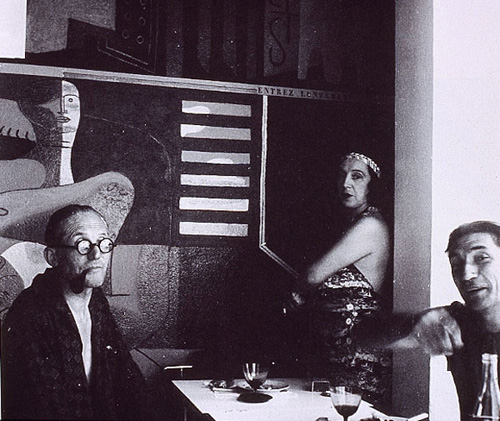 Le Corbusier and his wife with Jean Badovici. Photo taken by Gray. 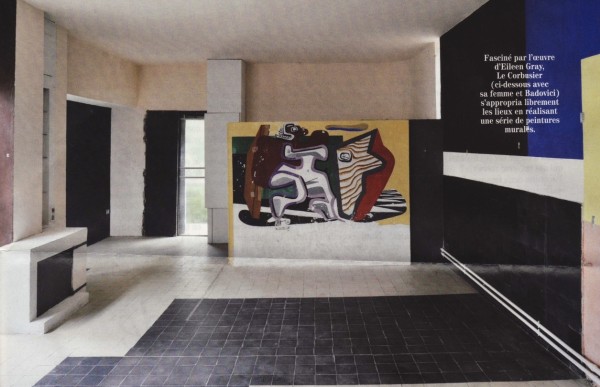 A view of the main salon as it appeared during restoration, with Le Corbusier’s mural on the back wall. Photo by Luc Castel. 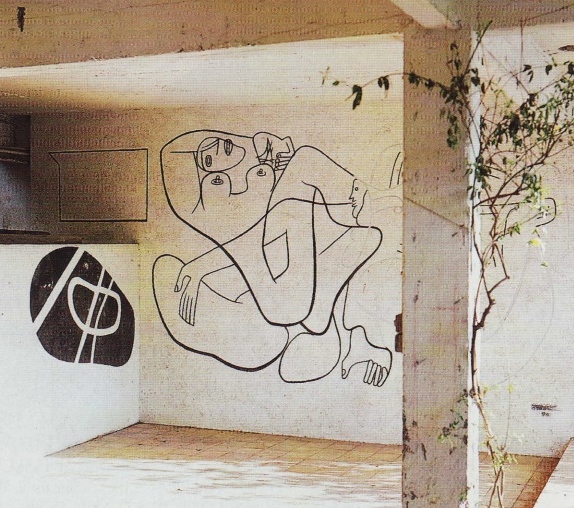 Another mural by Le Corbusier as it appeared when the property was photographed prior to renovations. Photo courtesy Foundation Le Corbusier. 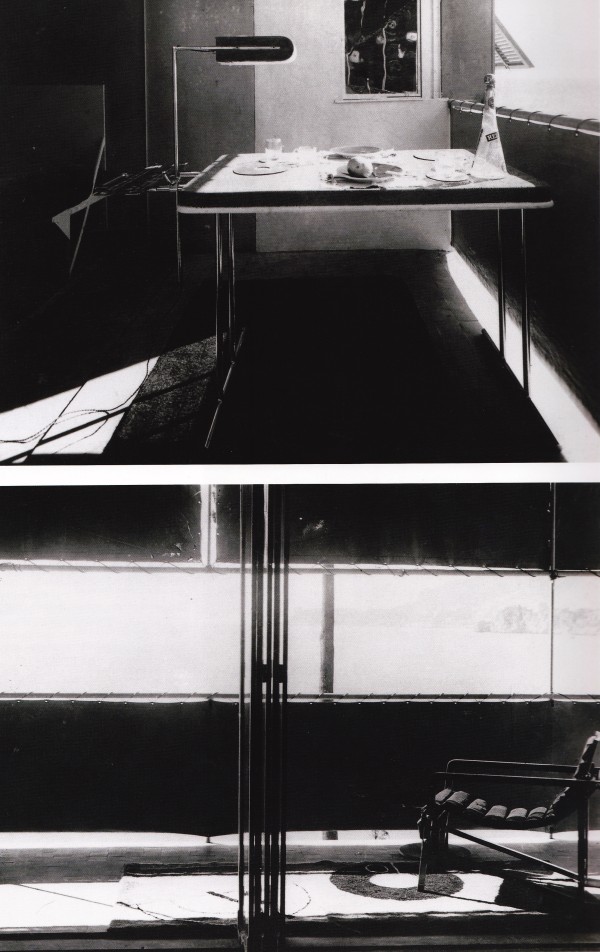 A vintage view of the terrace features a tubular steel table with cork top and adjustable light fitting, and full-length concertina folding windows opened up to the view. From Eileen Gray by Phillippe Garner.

The balcony off the salon opens on to the view of the Bay of Monaco, and features sailcloth awnings reproduced to the original design. From Grand Designs, 2011.

An exterior view featuring the upper balcony off the living room. Photo by Luc Castel. 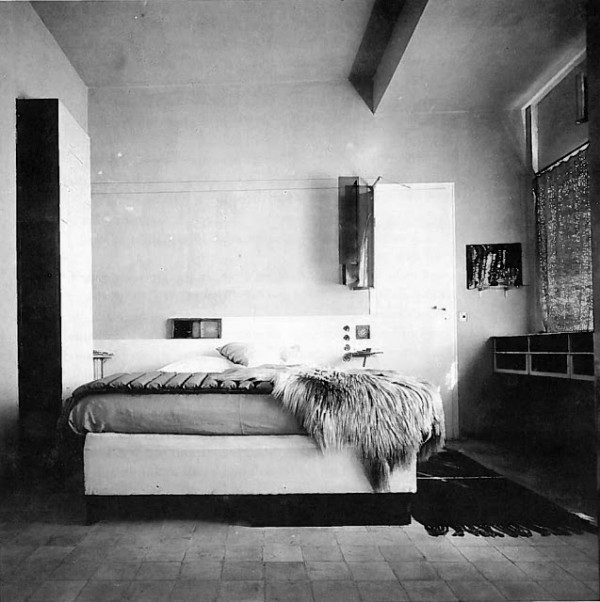 The main bedroom as featured in L’Architecture Vivante, c. 1929. 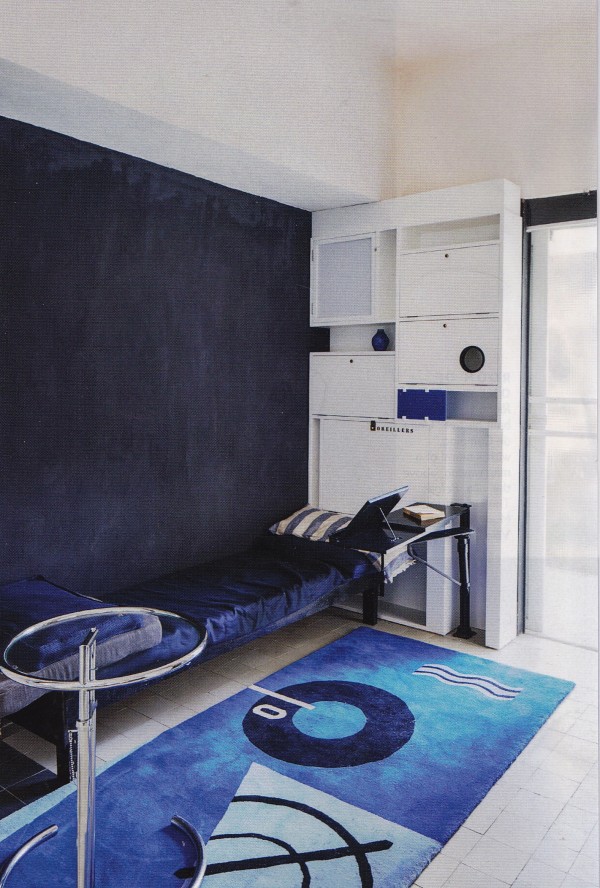 A guest room with a private entrance as it appears today, post renovation. Photo by Simon Watson. 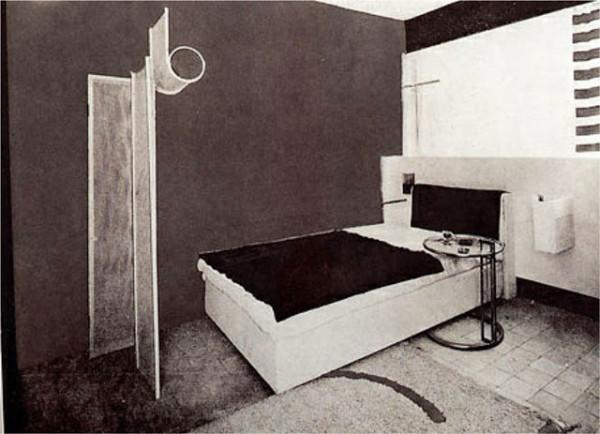 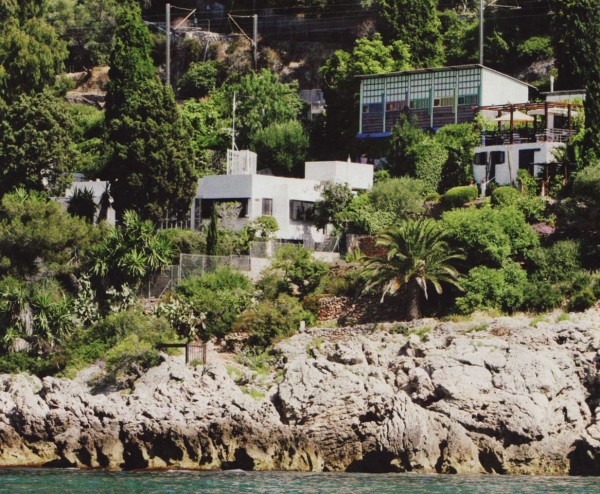 A view of E.1027 from the coastline during renovations, with Le Corbusier’s Unités de Camping sited above it. Photo from Grand Designs, 2011. 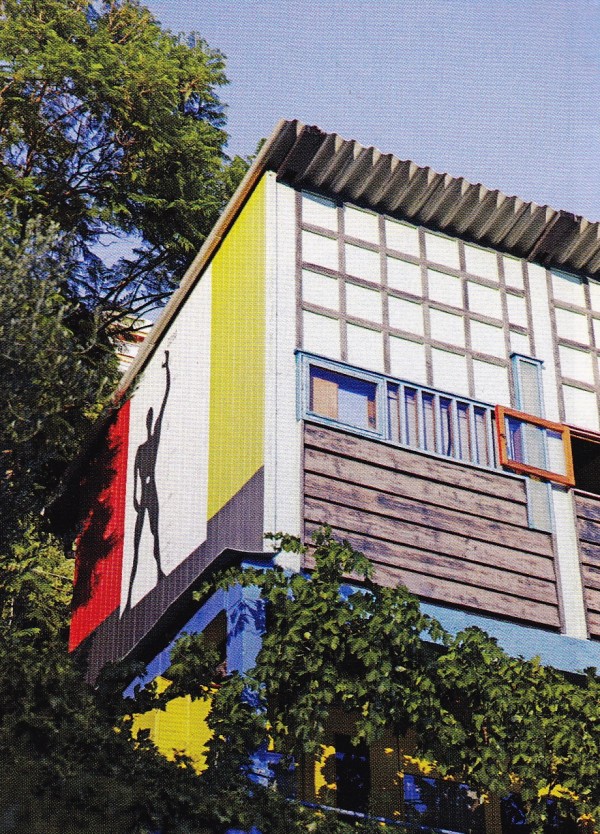 Le Corbusier’s five cabins – Unités de Camping – with a mural of a man waving, above E.1027. Photo by Simon Watson.

For a comprehensive source on the life and work of Le Corbusier read a special page dedicated to the prolific architect and artist at Artsy, which includes his biography, beautiful images of his works, exclusive articles, as well as up-to-date exhibitions – a unique Corbusier resource.

“The home should be the treasure chest of living” – Le Corbusier

includes his bio, beautiful images of his works, exclusive articles about Le Corbusier, as well as his up-to-date exhibitions – it’s a unique Corbusier resource.