“Swish Chalet”: that was the headline for an article written by Ros Byam Shaw for The World of Interiors featuring a chalet in Klosters, Switzerland, designed by the jet-set’s favorite go-to decorator, Nicky Haslam.  At a loss for a title more aptly suited, witty, or clever, this play on words stuck. 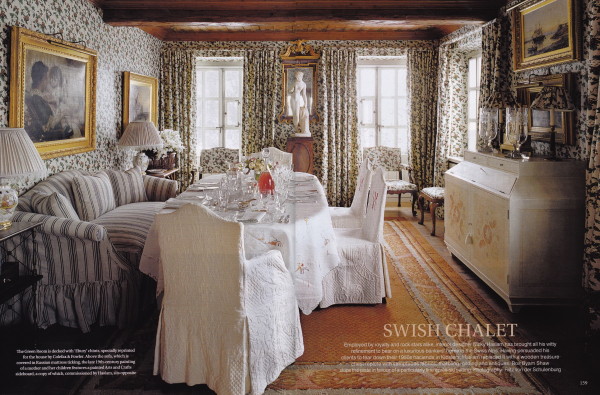 Colefax & Fowler’s “Ebury” chintz was reprinted for The Green Room, above. The sofa is covered in Russian mattress ticking; the late 19th-century painting of a mother and her children features a painted Arts & Crafts sideboard, a copy of which sits along the opposite wall.

Haslam’s client, a banker, purchased a 1950’s hacienda (as strange as that sounds in the Swiss Alps) and was convinced by Haslam to tear it down and build a traditional Swiss chalet decked out with luxurious, witty flair. It’s a nod to those chalets of yore favored by legitimate royals, such as the Rothchilds’, Windsor’s, and Grimaldi’s, and those self-appointed royals, such as the Onasis’ and Kennedy’s. A mix of both humble and sumptuous materials, rich fabrics and color palettes, cosseting upholstery, elegant antiques with impressive provenance, whimsically painted custom furniture, and timeless European Old World glamour inform rooms at once rustic and sophisticated. If one thing is certain, for the fortunate few who are invited as guests here, it’s that hitting the piste reins second to après–ski, chez the chalet that Haslam built. 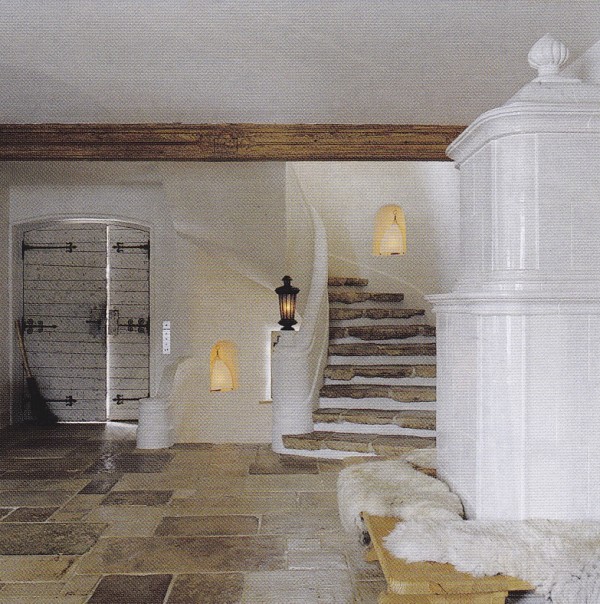 The front door opens to an entrance hall that runs the length of the chalet. Haslam purposely had the plasterers do “a bad job” to make the plasterwork appear like packed snow formed by hand. 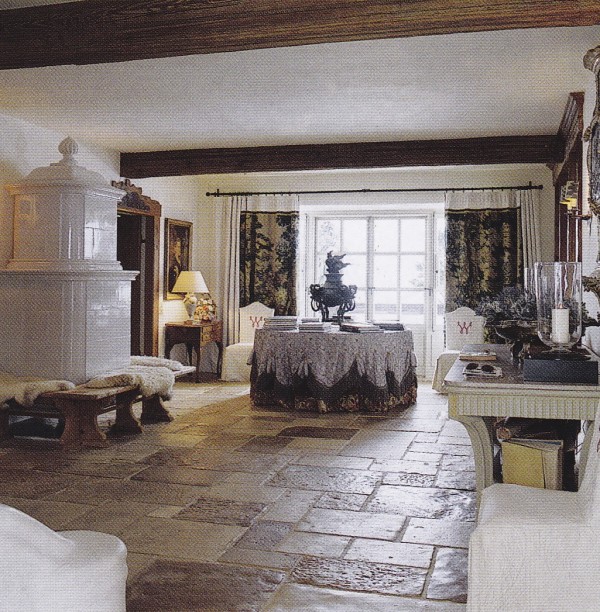 A view toward the opposite end of the entrance hall features a round table draped in a scallop-edged tablecloth encrusted with beads and sequins and looped with ermine tippets over an undercloth of embossed Tudor velvet. The glamorous white ceramic Austrian stove is surrounded by a wrap-around bench draped with sheepskin. At the windows hang a pair of 17th-century tapestries which Haslam had cut in half and appliqued onto a pair of thick linen curtains.

An 18th-century German verre églomisé mirror hangs above a painted hall table flanked by side chairs with monogrammed slip-covers in the entrance hall. 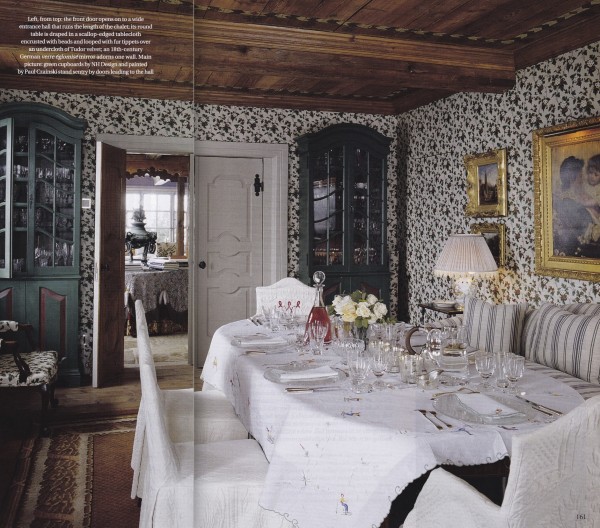 Another view of The Green Room toward the entrance hall features a pair of custom green-painted recessed cabinets designed by NH Design. 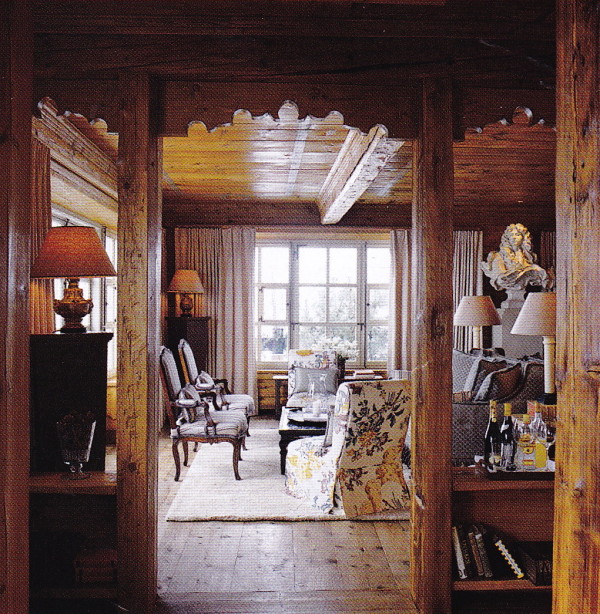 The salon viewed through a wooden door surround originating from an Austrian schloss is simply elegant, with a dash of witticism in the form of a flamboyant plaster bust. 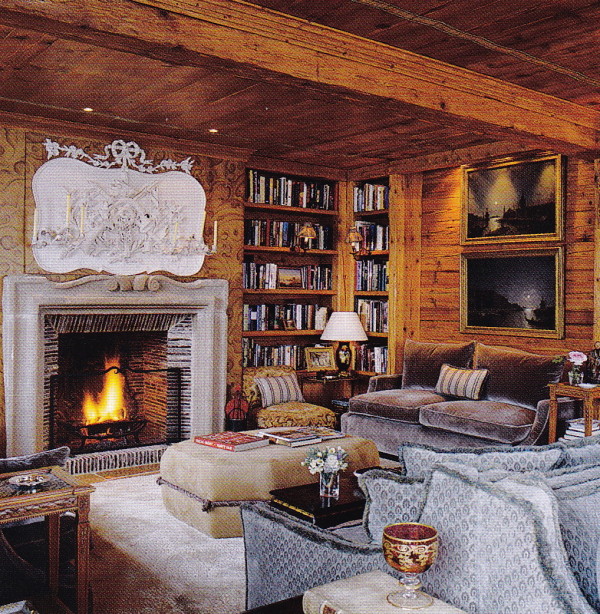 An 18th-century Italian stone chimney piece dominates the other end of the salon, crowned by a carved wood overdoor painted to look like plaster. Here, luxurious silk velvet for upholstery meets humble pine paneling for the walls and ceiling. A stylized decorative pattern painted by Paul and Chris Czainski adorns the fireplace wall. 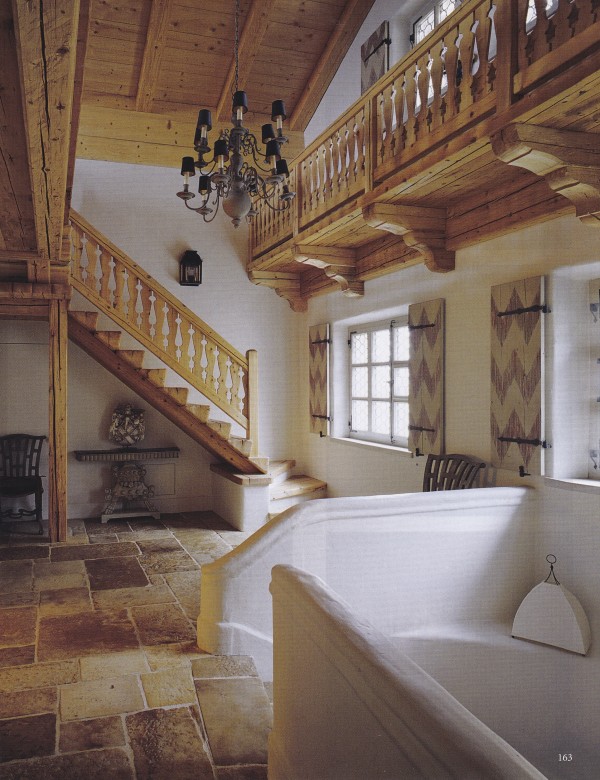 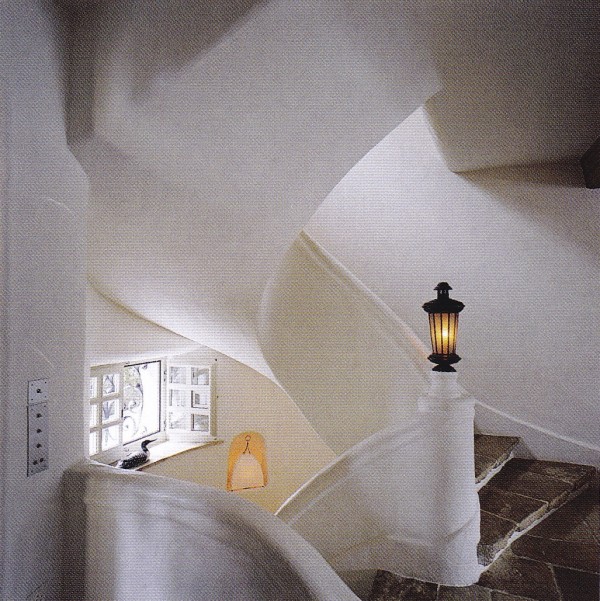 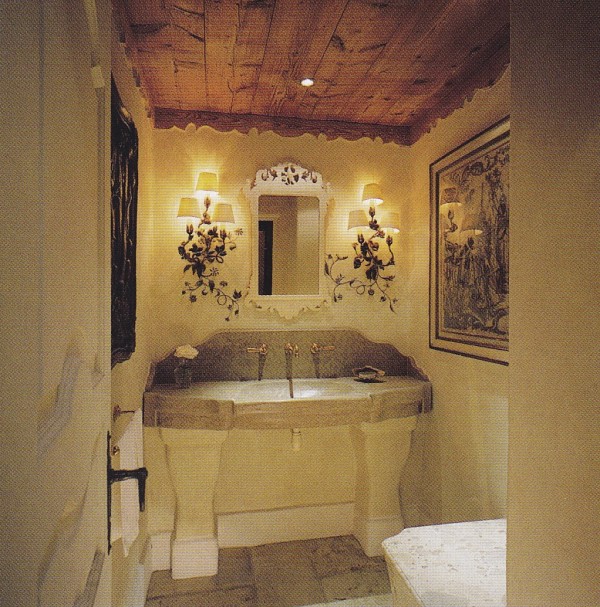 The cloakroom features a monumental stone washbasin, above which hangs a Georgian mahogany mirror painted white. 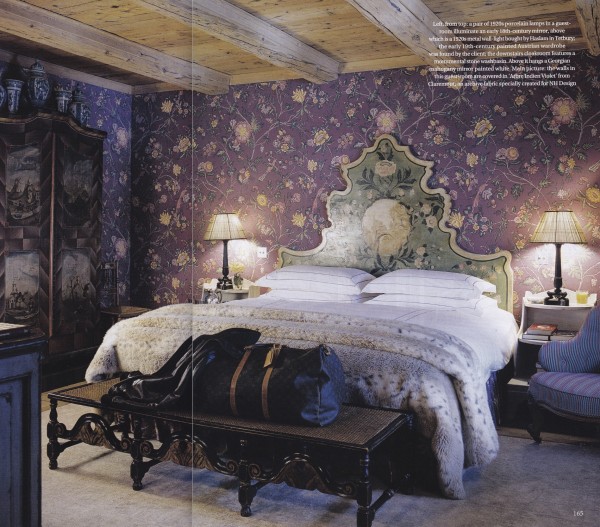 The twin beds in the guest room were specially commissioned and decorated by a Spanish painter. The walls are covered with “Iran Rose 2” fabric from Claremont. 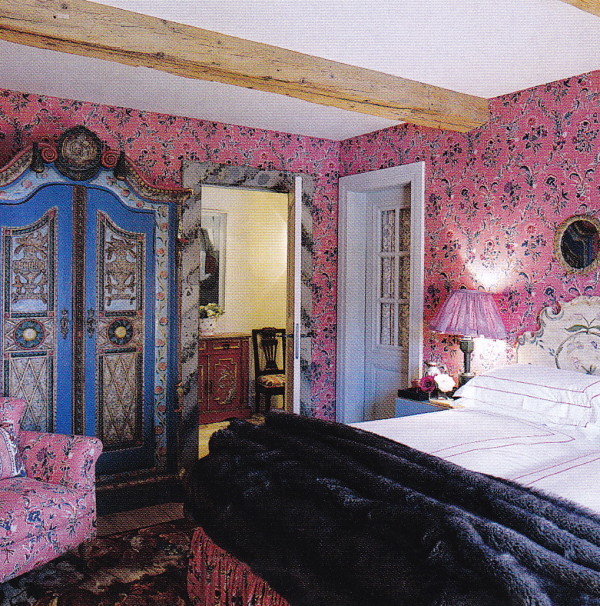 An alternate view of the same guest room features a custom painted wardrobe in Prussian blue.

The rustic bathroom is enlivened by walls covered with antique Russian manganese tiles and a gleaming West One Bathrooms bathtub. 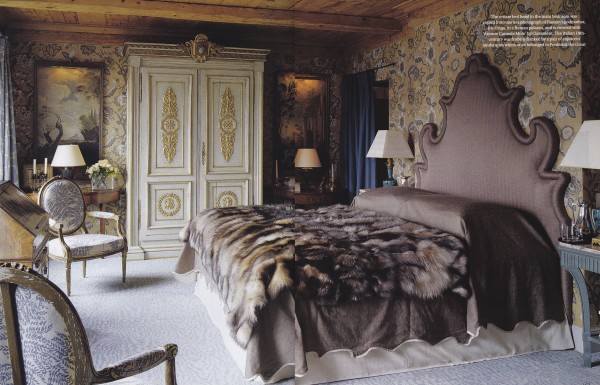 The glamorous rococo-style headboard in the main bedroom was copied from one in a photograph of Haslam’s godmother, Iris Origo, in a Roman palazzo, and is covered with “Armure Cannele Mole” by Claremont. The Italian 18th-century wardrobe is flanked by a pair of capriccio landscapes which once belonged to Frederick the Great. Nothing says “royal retreat” like a fur throw. As decadent and glorious real fur would be, I hope this is a rather good imitation. 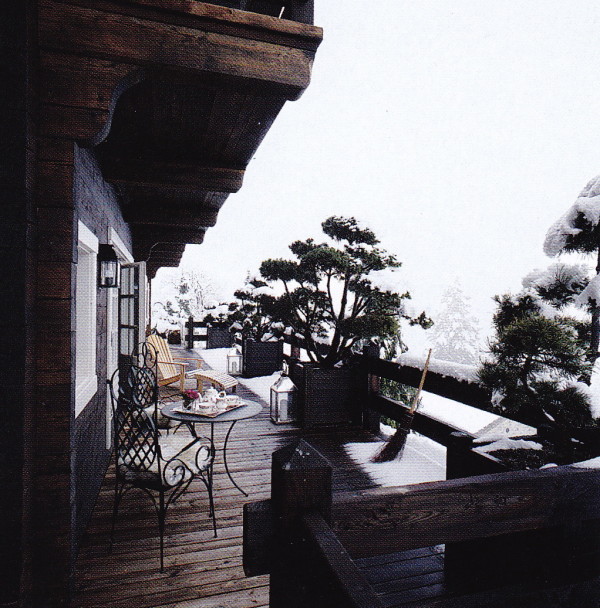 The terrace off the main salon is designed in pure Swiss style, affording views over Klosters.

This post was based on an article written by Ros Byam Shaw for The World of Interiors. Photography by Fritz von der Schulenburg.