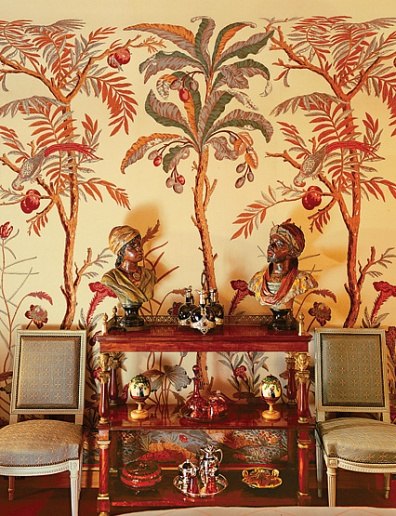 Chalet de Ferrières has been written and blogged about enough, this is true. All the same, I wanted a record of the several known photos published of the chalet in one concise place. My blog is as much a library of images that I reference for own projects and interests as it is a medium to share ideas and images about interior design and decoration, some of which risk being lost to obscurity. Chalet de Ferrières represents a particular place in time, when the jet-set outfitted their residences – from vast estates to charming retreats – in grand, and often opulent, style. The Rothchild’s taste for opulence became world renown, signifying the era of le goût Rothschild. I hadn’t originally intended to write this post but decided I would like to elaborate on the brief mention I gave it in Fresca Alpina. For this reason the following descriptions and commentary on the chalet are taken directly form their sources, Architectural Digest (photographed in 1987) and Horst Interiors by Barbara Plumb (photographed in 1978). If you have never read, or perhaps no longer own, the publications from which the following images and information originate then consider this a gift from me to you. Enjoy!

In the photo above: “An 18th-century Persian fabric, which formerly hung at the Château de Ferrières, now covers the walls and ceiling of a guest room. The 19th-century étagère with gilt-bronze mounts holds a pair or Moorish painted terra-cotta busts.” (AD)

“For the Baron Guy de Rothschild, exchanging the vast Château de Ferrières, outside Paris, for a chalet on the estate was a logical step. For Marie-Hélène de Rothschild, it signaled an end to the elaborate balls the couple had thrown and a return to a quieter way of life.” (AD)

“In his memoirs, The Whims of Fortune, Baron Guy de Rothschild recalls how he was just trying to ‘steal a march on the evolution of history. I’d planned to exchange a country château and a Paris townhouse for a small chalet and a city apartment. I found myself with a palace on an island (Hôtel Lambert) and a chalet in the forest. As usual with Marie-Hélène, it’s always the unexpected that happens.'” (AD) 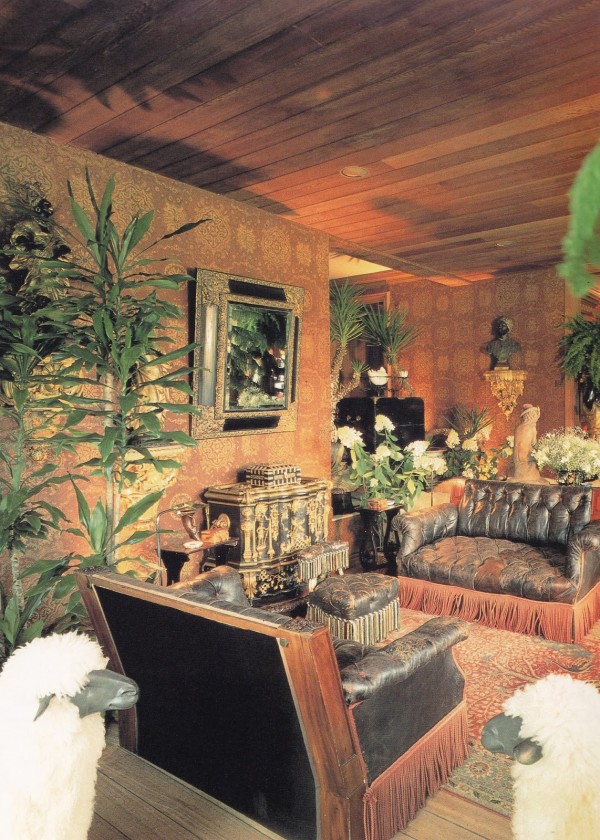 “Baron Guy worked closely with architect Augustin Julia on every phase of the design and building of a new, shingled Ferrières in the Wrightian mode. The baron’s wife, Marie-Hélène, masterminded the interior in collaboration with the designer François Catroux. Her goal was to distill the luxurious eclecticism of its illustrious namesake. The Winter Garden indicates how brilliantly she succeeded. A teak ceiling, recessed lights, and sheep by François Lalanne are pure twentieth-century, but everything else bespeaks the splendor of a bygone era. Treaures from the seventeenth-century include Venetian blamamoors, a sumptuous German cast-iron chest, and a German mirror on tooled Russian leather walls; finds from the nineteenth-century comprise zany Victorian black leather love seats and chair with deep fringes.” (Horst Interiors) 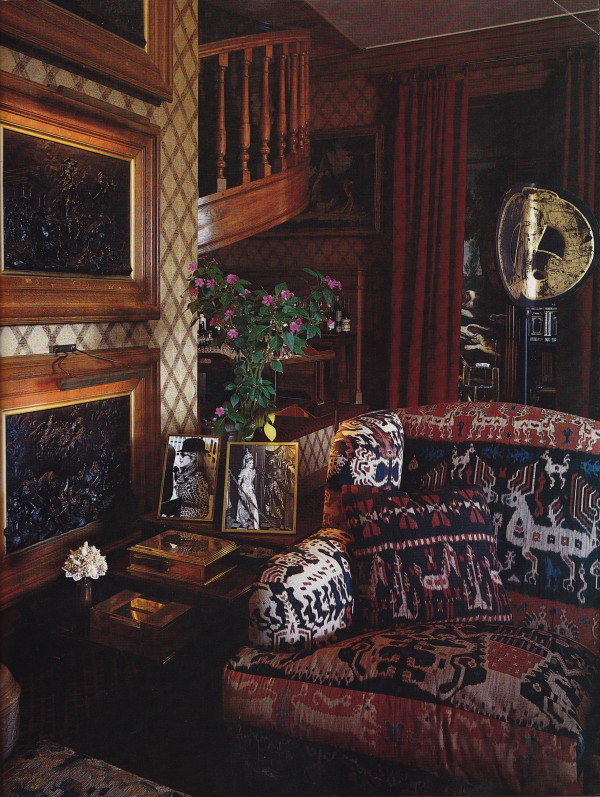 “With designer François Catroux, the baroness selected those pieces from the château that would offer a more relaxing environment. In a corner of the main salon is a series of oak-framed bronze reliefs.” (AD) 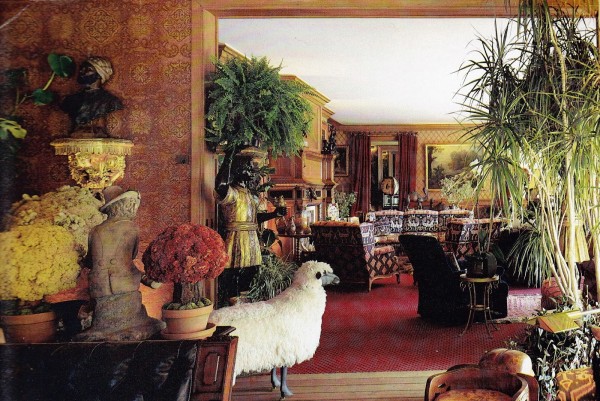 “Standing demurely in a the doorway that leads from the airy Winter Garden to the main salon is a sheep by François Lalanne.” (AD) 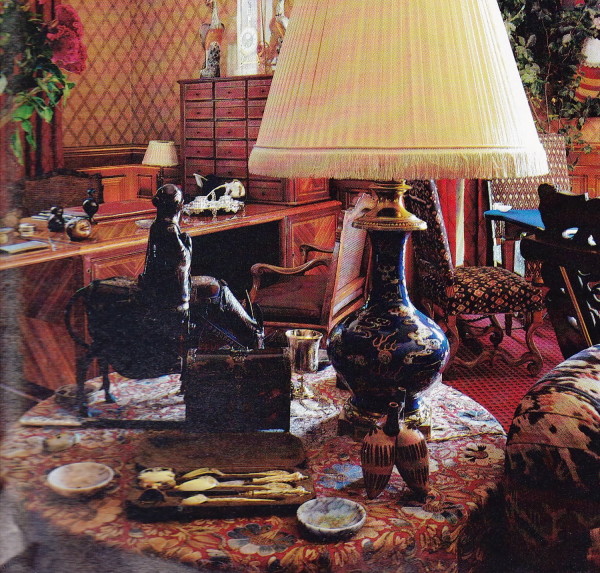 “A table in the main salon displays some personal memorabilia: a Chinese figure, a tortoiseshell casket, a traveling canteen of gilt flatware.” (AD)

“The Winter Garden, with walls of cuir de Russie, and a wood ceiling, is where the baron and baroness meet before dinner.” (AD) 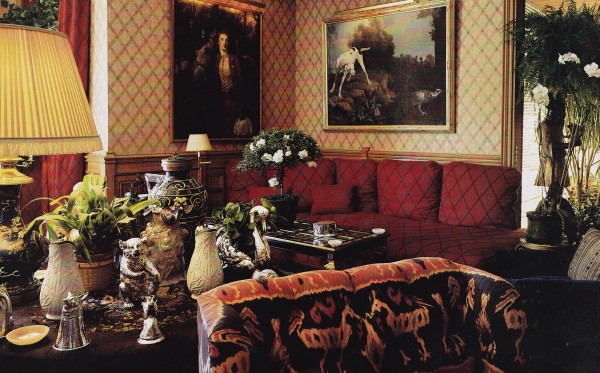 “Lady Sarah Spencer Churchill, by Sir Joshua Reynolds, and a dog painting by Desportes hang above a banquette in the main salon.” (AD) 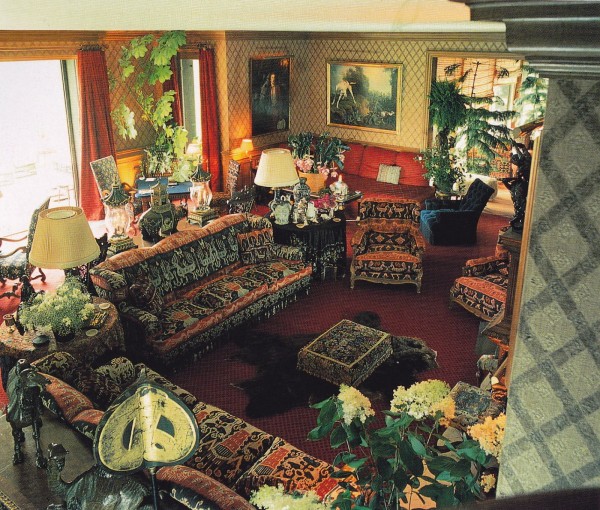 “The naturalness of abundant plants and flowers in the living room leavens the luxury of precious objects and rich patterns. Another inspired bit of juxtapositioning: hanging a Reynolds portrait of Sarah Spencer Churchill and a hunting scene by Desportes on informal diamond-stenciled straw-covered walls. A Louis XIII Savonnerie tapestry turns the pouf into a center-stage perch of splendor.” (Horst Interiors) 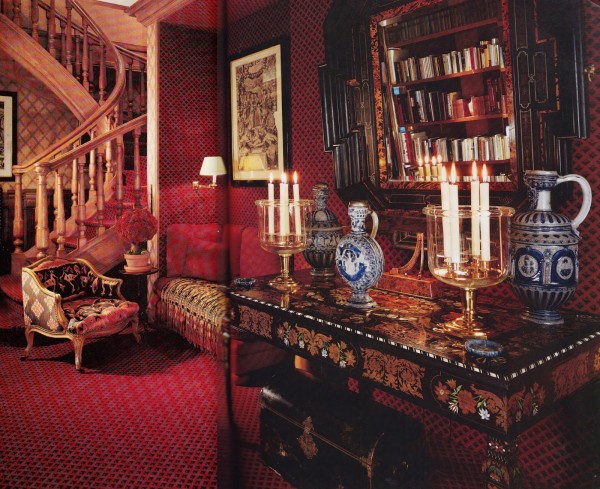 “Catroux continued the intimate yet luxurious ambiance in the library. Rhenish salt-glazed stoneware flagons rest on the 17th-century marquetry table inlaid with ivory. Above it, a 19th-century German mirror reflects a part of the baron’s extensive collection of books.” (AD) 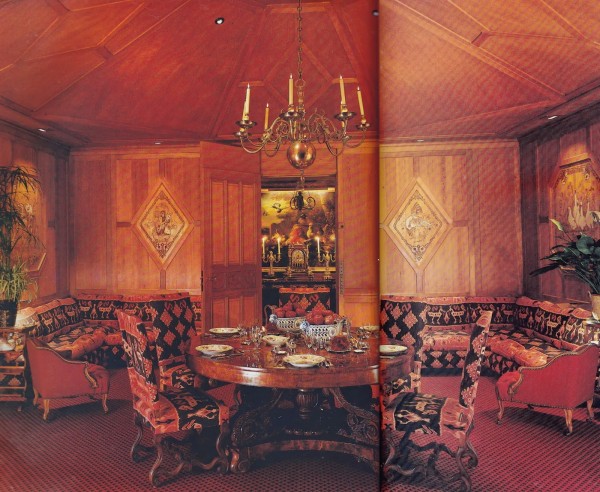 “For the dining room, Marie-Hélène incorporated the wood-paneled walls and octagonal ceiling form the Chantilly château of Baron Guy’s mother. The couple dine at the 19th-century marquetry pedestal table or, for larger dinner parties, set up two round tables in front of the corner sofas.” (AD) 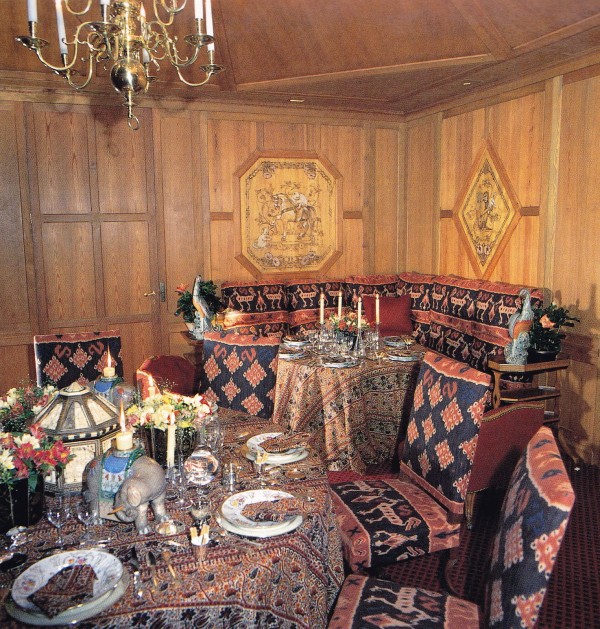 “A sophisticated piling on of rich pattern and color in the dining room contrasts charmingly with naive flowers that look like they were just cut in the garden. Batik cloths drape the tables; antique Indonesian shawls cover the banquettes and chairs. The delightful paneling, which could be an illustration for a children’s book, was moved from the children’s dining room at San Souci, another Rothschild château. Brilliantly colored eighteenth-century procelain elephants from India carry candles on their backs.” (Horst Interiors) 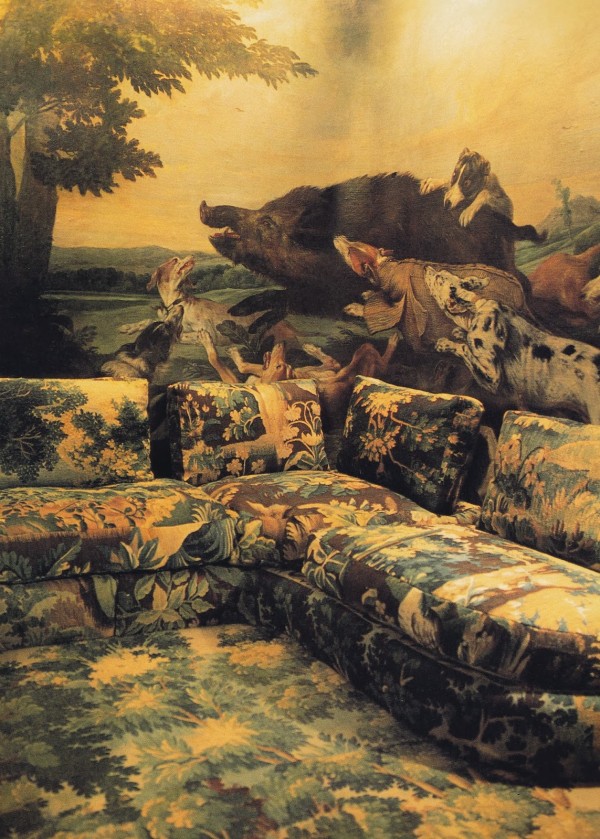 “A banquette upholstered in the same seventeenth-century Verdure tapestry that covers the floor invites relaxation in this splendid television room. On the walls behind, paintings by Desportes reiterate pastoral themes and colors in a vivid depiction of a wild boar hunt.” (Horst Interiors) 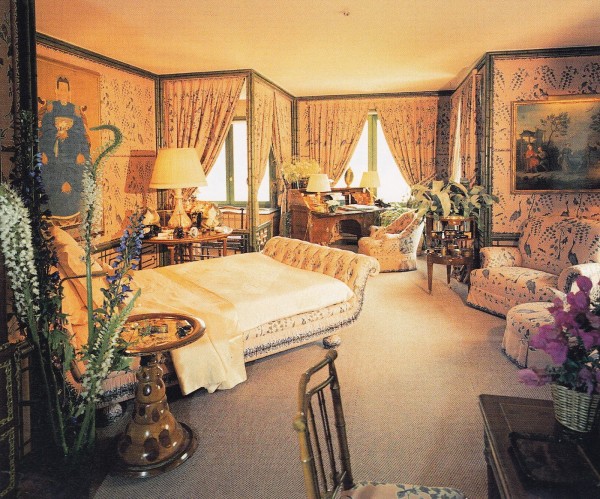 “Airy, yet exotic, this enchanting bedroom benefits from the beauty of the antique Indonesian shawls lavished on walls, curtains, and sleigh bed. Two compelling eighteenth-century Chinese paintings – a portrait of an empress and a landscape by a French missionary to China – add drama and focus. A curtained bathroom juts into the room and becomes part of it. Both a Louis XV bureau and the bed are angled for interest. The top of the unusual Brazilian palmwood night table is inlaid with butterflies.” (Horst Interiors) 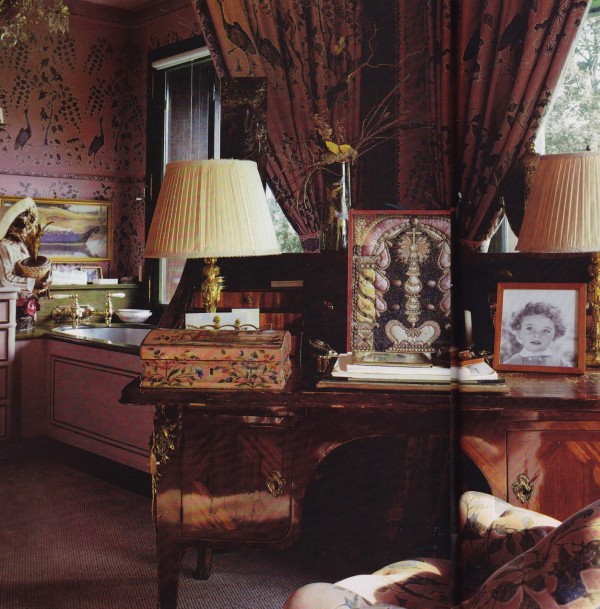 “On the Louis XV desk in the baroness’s bedroom is a photograph of Philippe de Nicolay, the baroness’s son from her first marriage, and a shell objet de maîtrise. Just beyond is her bath.” (AD) 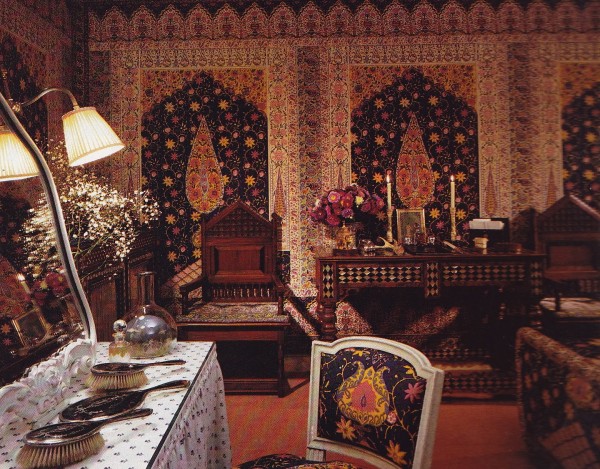 “A guest room, known as the Persian bedroom, contains Indian fabric as wallcoverings, a 19th-century Syrian table with mother-of-pearl and ebony inlay, and a pair of Indo-Portuguese armchairs.” (AD)