Borrowing from the title of an article written by Jean Leymarie for House & Garden in December of 1987, the final home of the late artist Balthus and his artist wife, Setsuko, “Chalet Balthus” is correctly known as the Grand Chalet de Rossinière, in Switzerland. The largest known all-wooden structure of its kind in Europe, it was built between 1752 and 1756 by Jean-David Henchoz, a local lawyer and businessman, who wanted to create “a house for cheese”. The ground floor was intended for the sale of cheese while the upper floors were dedicated as living spaces, a common arrangement among merchants of this era. In 1977 the painter Balthus, Count Balthazar Klossowski of Rola, acquired the Grand Chalet and lived there until his death in 2001. 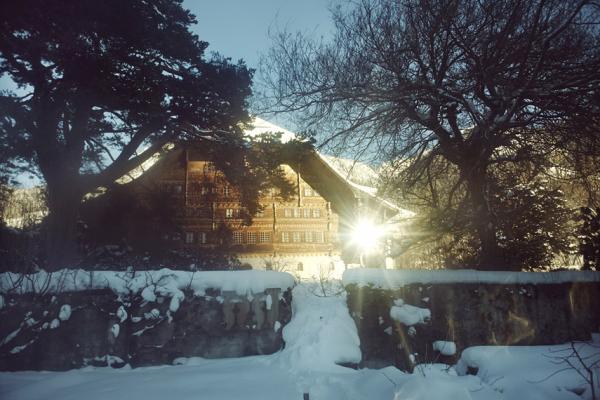 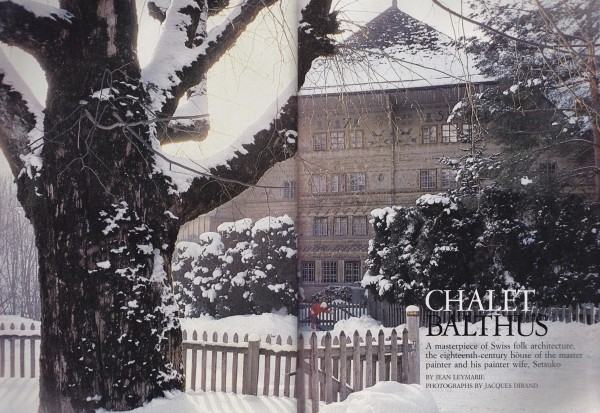 At the time of the 1987 House & Garden article Balthus and his wife, Setsuko, had been living in the chalet for ten years. The splendor of the all wooden chalet set in the majestic Alpine region of the Pays d’Enhaut appealed to their taste for Shinto temples and Oriental landscapes, evoking for Setsuko her native Japan.

Balthus moved to Rossinière from Italy, where he engaged his passion for art in 1961. Upon receiving an assignment to assist in the restoration of the Villa Medici he traveled to Japan to unearth that country’s art treasures; it was here that he met his future wife, Setsuko, a patrician beauty who to this day continues to embrace ancient Chinese traditions of manner and dress. She served as his model  for Oriental-themed canvases, and as hostess to their illustrious guests. 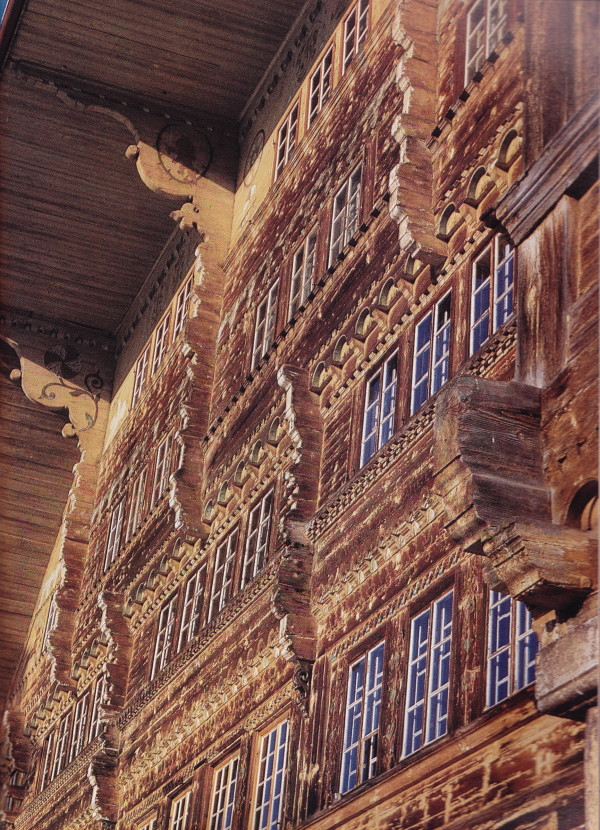 The Grand Chalet represents a masterwork of traditional Swiss folk art and craftsmanship. Between 1850 and 1852 the chalet was transformed into a hotel where, it is noted, Victor Hugo stayed in September 1883. When Balthus purchased the property he removed all the additions made by the hotel and sanded all the pine down to its original sandy, golden tones, and retained all of the original ceramic stoves.

Amorous of mountains, and the Bernese Alps in particular, Balthus painted “The Moutain” (1935-37), a reflection on childhood memories spent there. 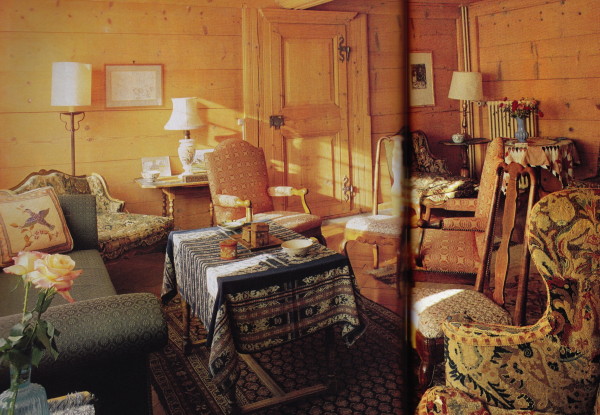 The furniture is a blend of regional and Italian pieces, with the occasional Oriental flourish provided by a textile or objet d’art – and some very impressive art by Delacroix, Bonnard, Derain and, of course, Balthus. A mix of chairs – a tapestry Queen Anne wing chair, two 18th-century Swiss armchairs in red-and-white linen, two chairs from a Savoyard castle – surround a table covered with Japanese cotton in the warm glow of the pine-paneled informal living room. 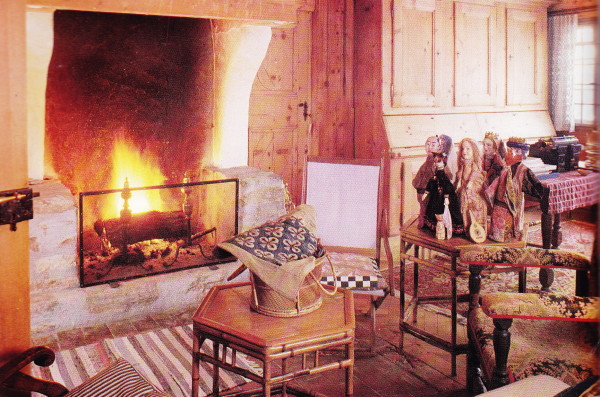 Setsuko used to give shows at Christmas time for the village with the puppets she made, displayed above on a table in the library. She also used them to tell stories to her daugher, Harumi. 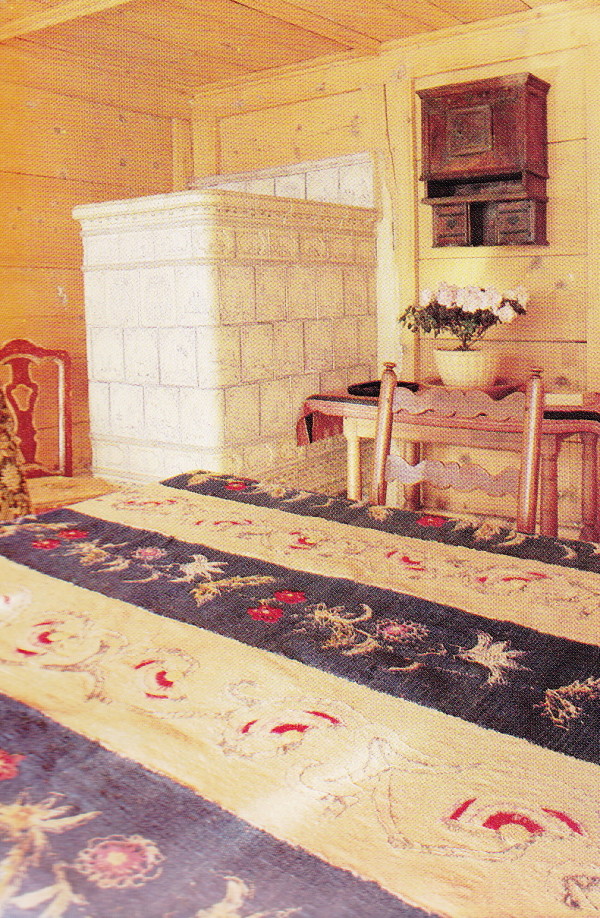 A 19th-century Greek rug covers a table in the breakfast room – the room that Victor Hugo reportedly slept in. In the corner of the room is an 18th-century blue-and-white ceramic stove, original to the house. 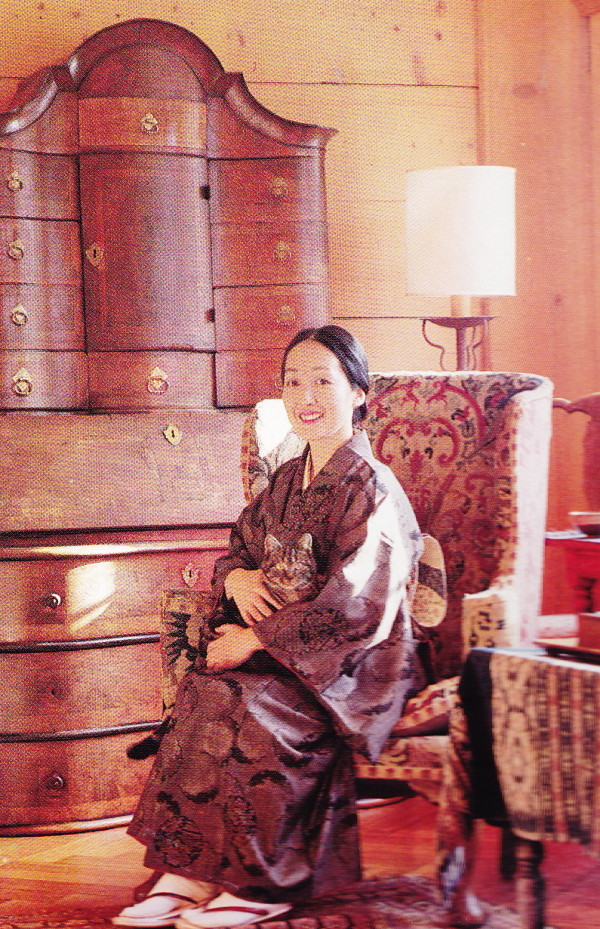 Setsuko poses in a winter house kimono from the Oshima region of southern Japan. To this day she wears traditional Japanese dress. 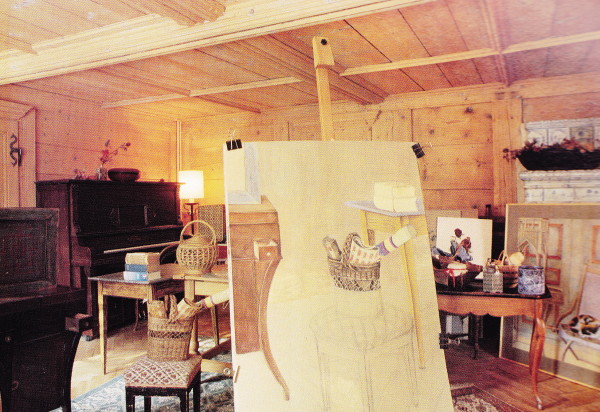 Balthus’ wife, Setsuko – an accomplished painter in her own right – created her own studio where she used to practice calligraphy and eventually began to draw and paint, most notably with gouache. A work in progress set on an easel offers a glimpse into her creative lair in the year 1987. 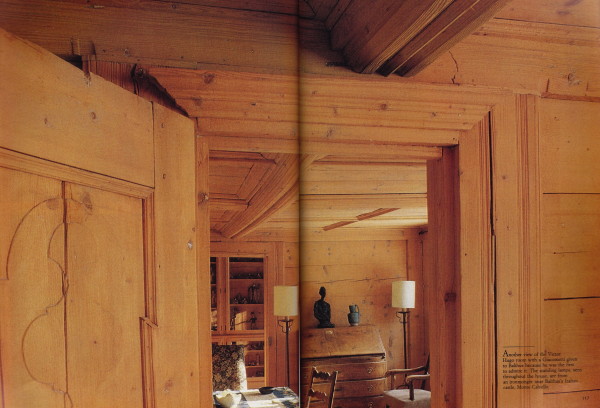 This view into the breakfast room provides a glimpse of a Giacometti sculpture given to Balthus because he was the first to admire it. The pair of iron floor lamps, as with all the iron lamps throughout the chalet, come from an iron merchant near Balthus’s Italian castle, Monte Calvello.

“Its’ Balthus, Setsuko, and their daughter, Harumi Klossowska de Rola. It’s the snow on the facade of the Grand Chalet. It’s a childhood dream and the memory of the Colle sisters, Les Trois Seours, the body of the young girl in Nu devant la cheminée (Nude in Front of the Fireplace). The closed door of the studio of the Chats au miroir (Cats with Mirror) and the open door of Setsuko’s studio. It’s coming to better understand the mystery of Balthus and his homes: Château de Chassy and the Castello di Montecalvello. It’s the bird room, the portrait of Balthus signed by Henri Cartier-Bresson. It’s a book by James Lord, Some Remarkable Men, and the exchange of correspondence with Fellini. It’s Malraux and Giacommetti, Japan and Italy.” 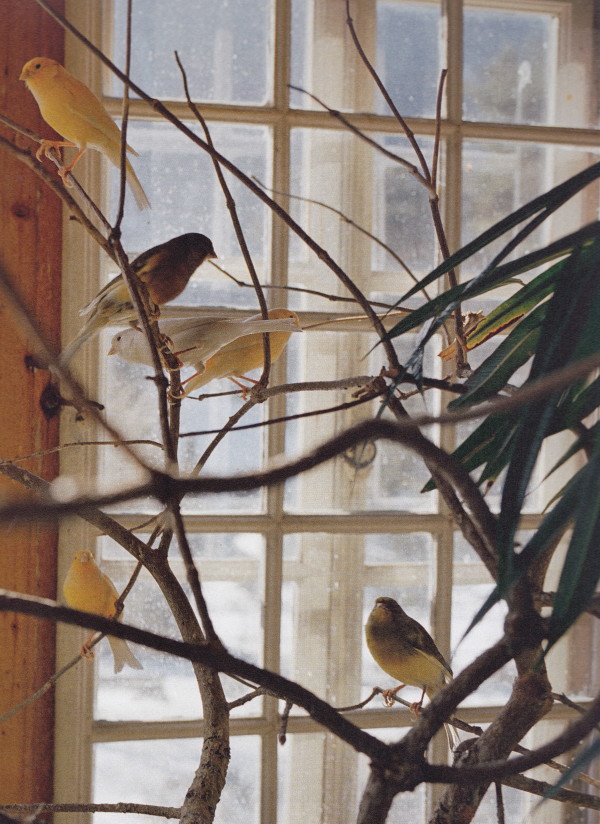 The Bird Room at the Grand Chalet de Rossinière. Photographed by François Halard in 2003. 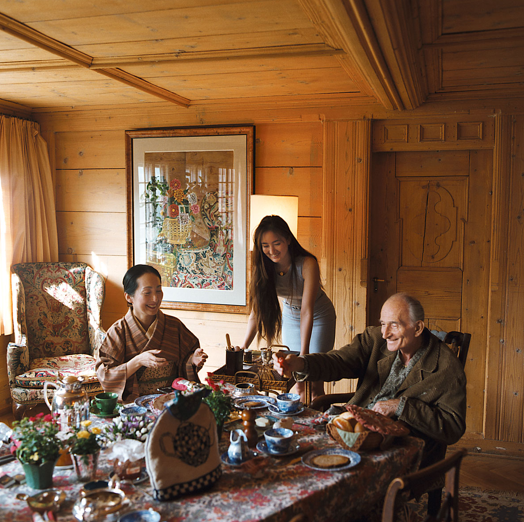 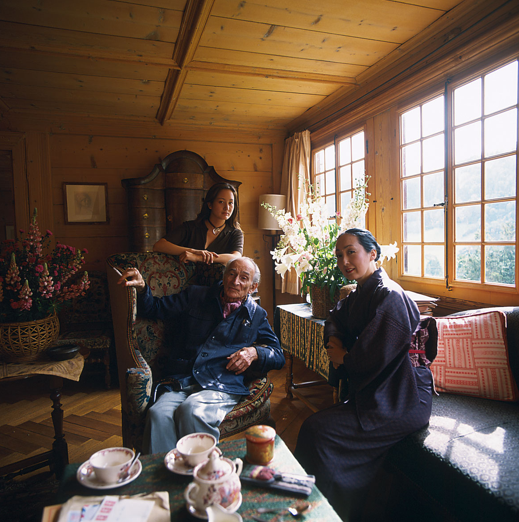 Baltus enjoying tea with his wife, Setsuko, and daughter, Harumi, at the Grand Chalet in Rossinière. Photo by Alvaro Canovas. 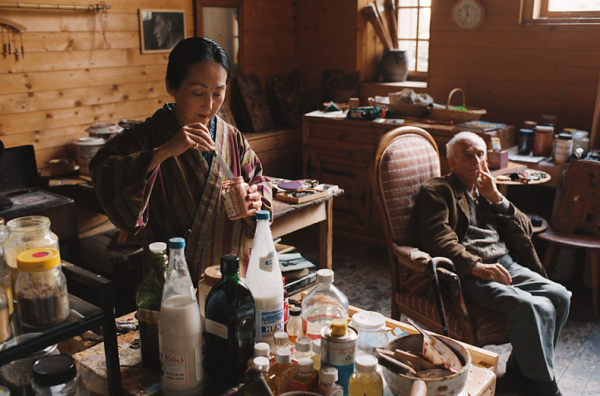 Setsuko, accompanied by Balthus, in the studio at the Grand Chalet in Rossinière. Photo by Alvaro Canovas. 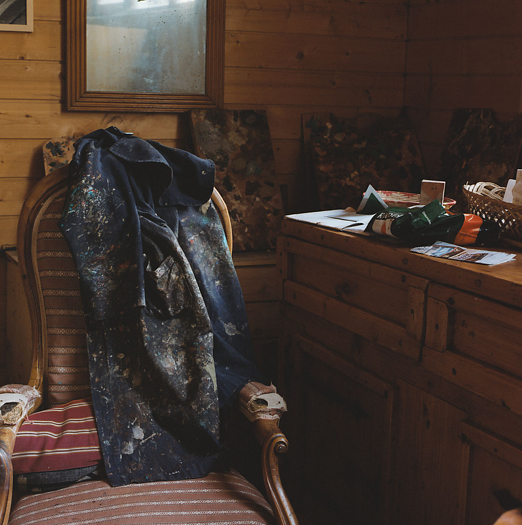 Setsuko’s kimono draped over a chair in the studio at the Grand Chalet in Rossinière. Photo by Alvaro Canovas. 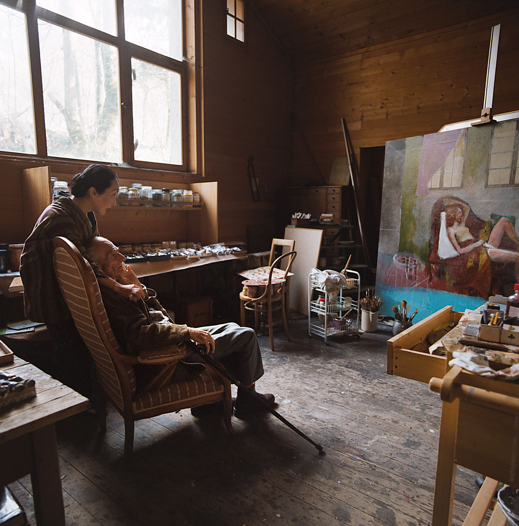 Setsuko with Balthus in the studio at the Grand Chalet, Rossinière. Photo by Alvaro Canovas. 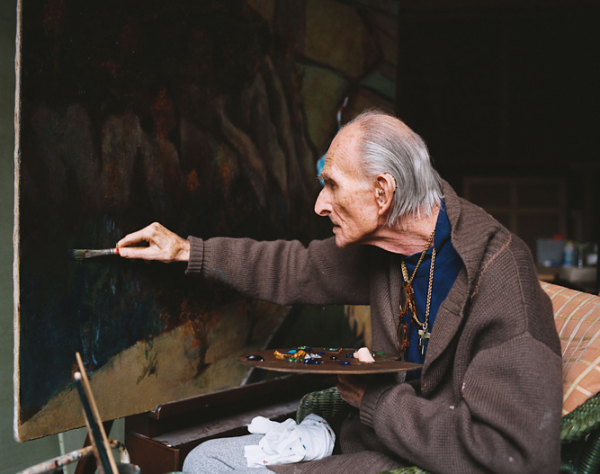 Balthus working one one of his canvases at the Grand Chalet in Rossinière. Photo by Alvaro Canovas. 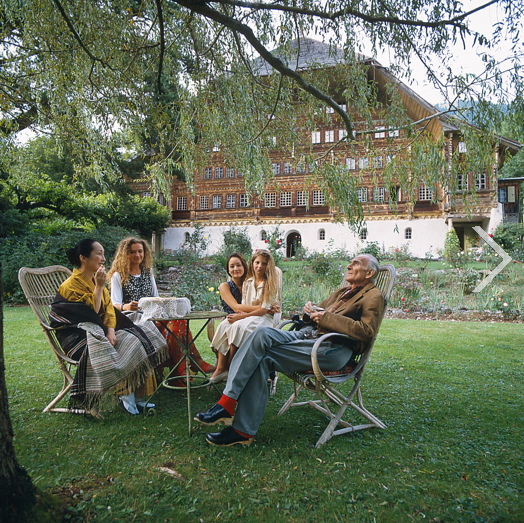 Balthus with his wife, Setsuko, their daughter, Harumi, and granddaughters at the Grand Chalet in Rossinière. Photo by Alvaro Canovas. 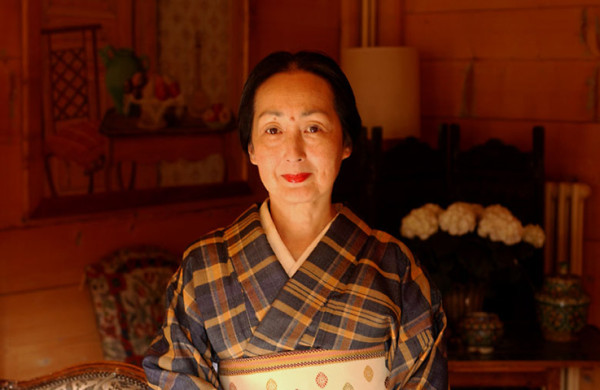 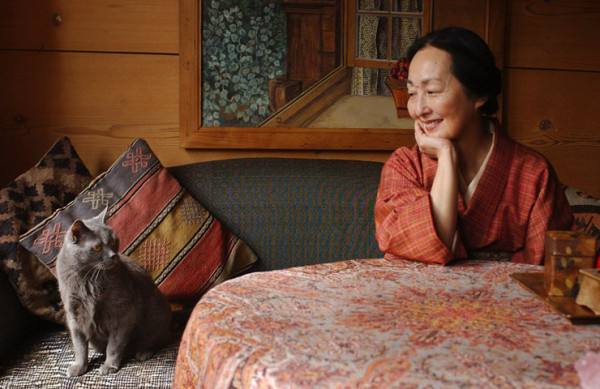 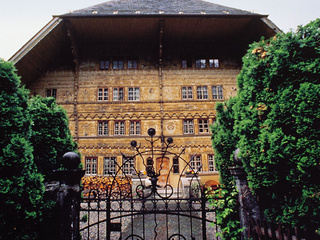 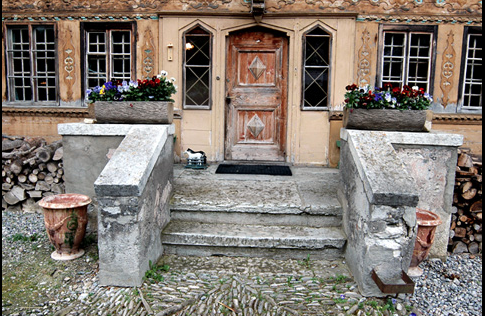 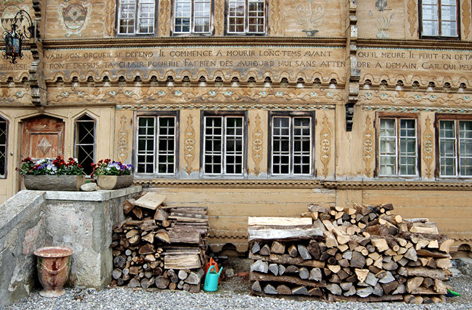 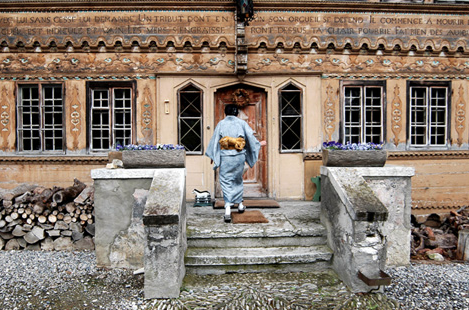 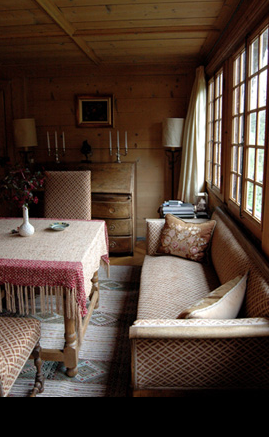 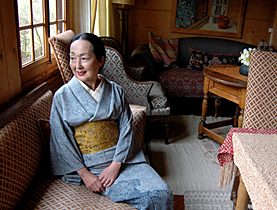 I hope you enjoyed this rare glimpse into life at the Grand Chalet at the time of Balthus. Certainly one of the privileges of blogging is having complete control over content and what interests me. But on a deeper level I feel an obligation to serve as a curator of images that might be lost to the passage of time. Whenever I discover images, interviews, and articles of interesting people, places and the interiors they inhabit I feel compelled to share them with the world so they are not lost to obscurity.

The Grand Chalet remains in the family and is not open to the public.

Reading list: Chalet Balthus by Jean Leymarie for House & Garden, December 1987, with photos by Jacques Dirand; François Halard published by Rizzoli, 2013. Photo credits for all other images have been noted.