The Tower of Peretti

Elsa Peretti’s holiday retreat on the Tuscan coast was hardly your typical relaxed and breezy waterfront dwelling. La Torre was a ruin of  a watchtower on the steep and craggy cliffs of Southern Tuscany built by Spanish invaders in the 16th-century as a military lookout between the Tuscan archipelago and the island of Corsica. Its remote siting appealed to Peretti as a safe haven from curious tourists. But its isolation and decrepit condition would not make life easy for her. After many attempts Peretti could not turn the awkward and spartan interiors with their thick stone walls, cell-like rooms and cracks for windows into welcoming spaces. Enter friend and maestro of atmosphere, Milanese architect Renzo Mongiardino. 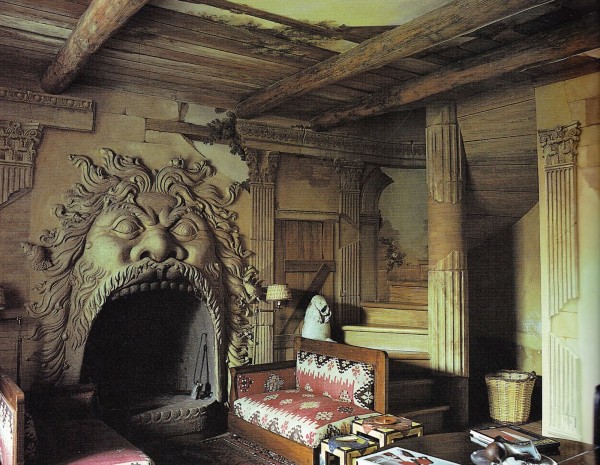 Mongiardino presented Peretti with two options: the first was to honor its past, taking it back with whitewashed walls, simple wooden furniture and mattresses on the floor. The second option was to create the illusion of living in a three-dimensional fairy tale tower with tromp l’oeil effects. “I was set on recuperating the sense of shelter and fantasy within as opposed to the bareness of the real world outside” explained Mongiardino. Peretti did not hesitate and gave Mongiardino carte blanche to create an illusory tour de force. 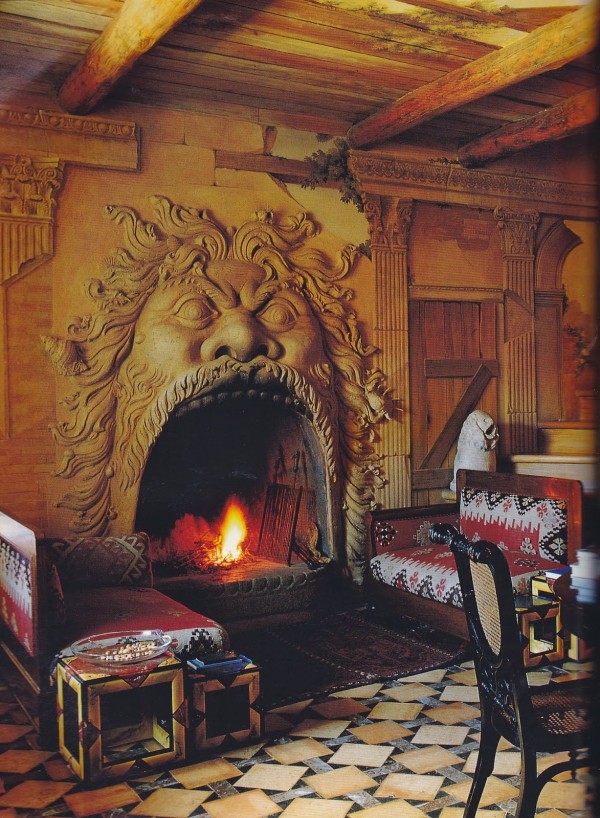 A cast after one of the gaping grotesques in the Baroque 16th-century Bomarzo gardens opens wide around the fire in the ground-floor living room, proving that overscaled elements lend the diminutive ones substance and drama. Tromp l’oeil columns, pediments, and vines emphasize the fairy-tale-like quality of the tower, reinforcing the “imaginative tradition of 17th-century architecture” and in the process distorting the actual perspective of the room, bringing to it a sense of lightness and space, which Mondiardino desired – further expanded upon with a blue painted sky for the ceiling. “I like it when tromp l’oeil effects actually manage to conquer the limitations of real space” noted Mongiardino. The patterned floor incorporates terra-cotta, wood and marble. 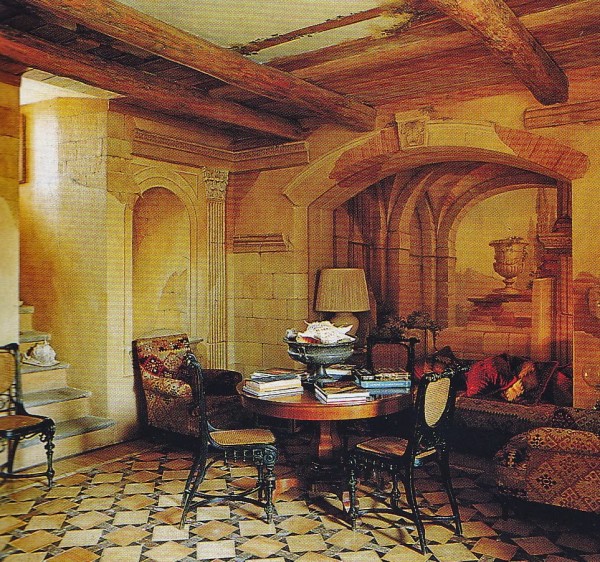 A a cozy recess in the same room contains a perspective of arches and fragments of beams and friezes and simple furnishings with an Old World sensibility. 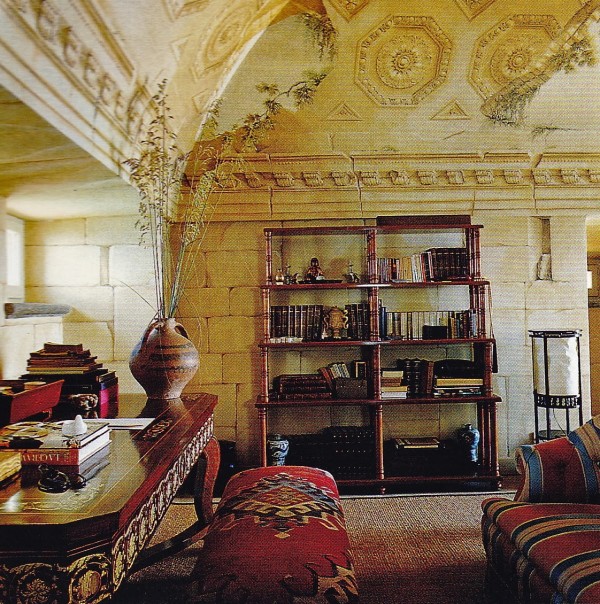 Above the lower level siting room is the salon at the top of the tower. Its pyramidal shape was dictated by the tromp l’oeil scheme Mongiardino employed vis-a-vis “breaking open the sides of the the vaulting and allowing a sweeping painted sky into the room”, as explained by Mongiardino. 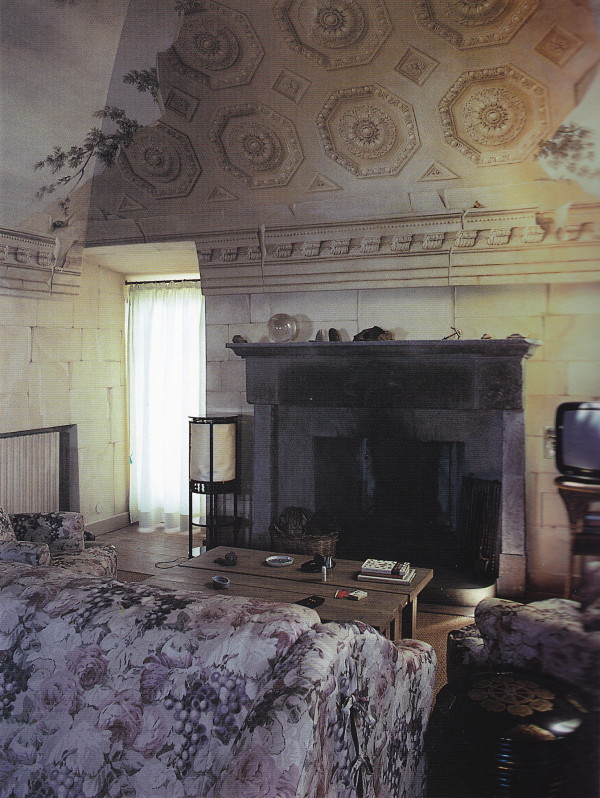 Another view of the tower’s uppermost salon reveals what Mongiardino described as “a more conventionally decorated space with tranquilly bourgeois furnishings.” 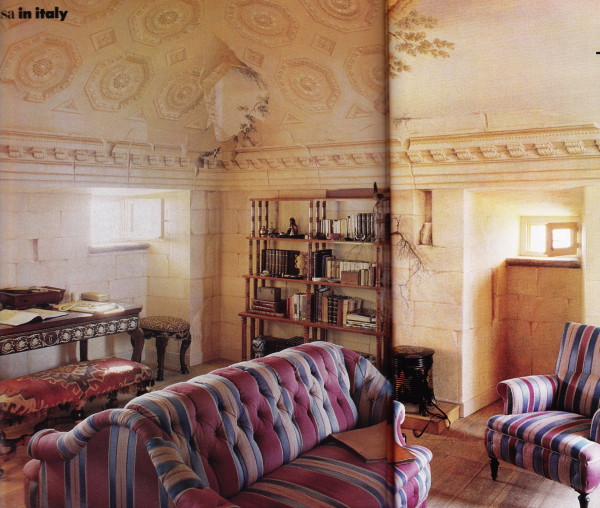 Mongiardino designed the tower sitting room as a “Roman ruin” with trompe l’oeil coffered ceiling opening to sky. The bookcases and furniture were designed by Mongiardino. 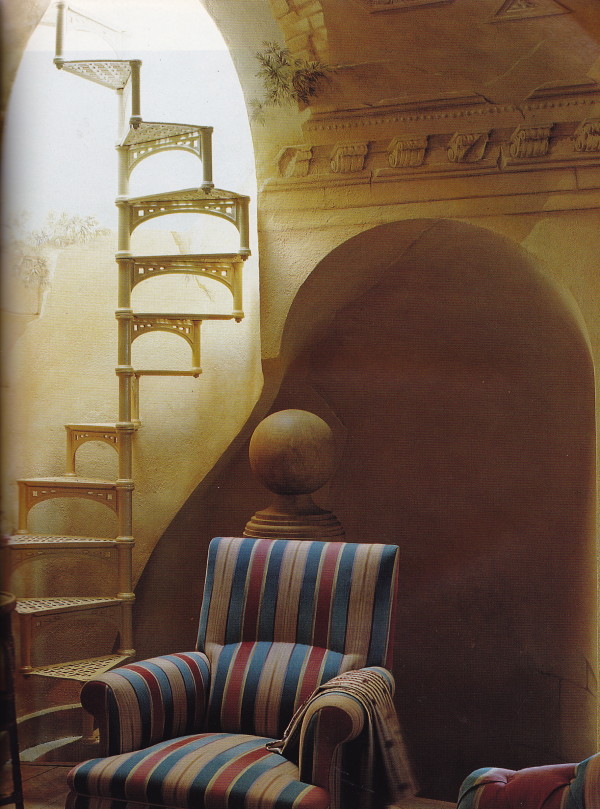 The spiral stairs lead to a roof-top terrace; the chair covered in a kilim injects of note of exoticism. 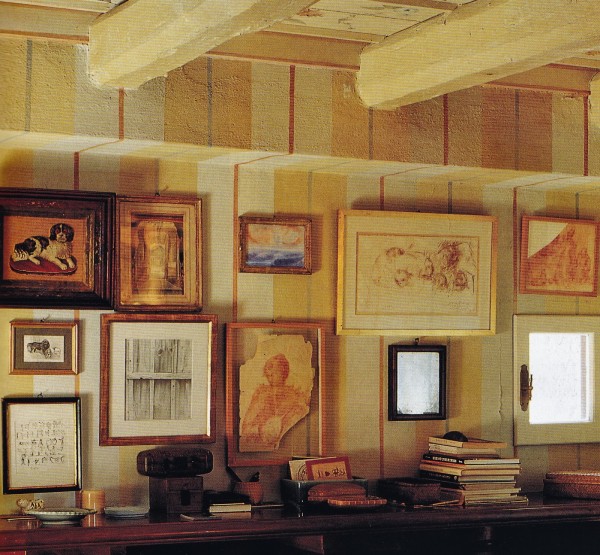 A collection of pictures hang on stripe-painted walls in Elsa Peretti’s bedroom. 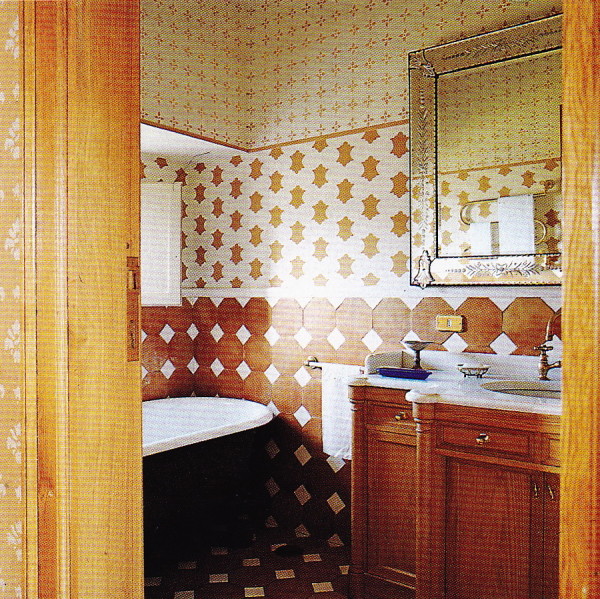 Mongiardino combined real terra-cotta tiles with stenciled imitation ones on the upper walls in a bathroom. 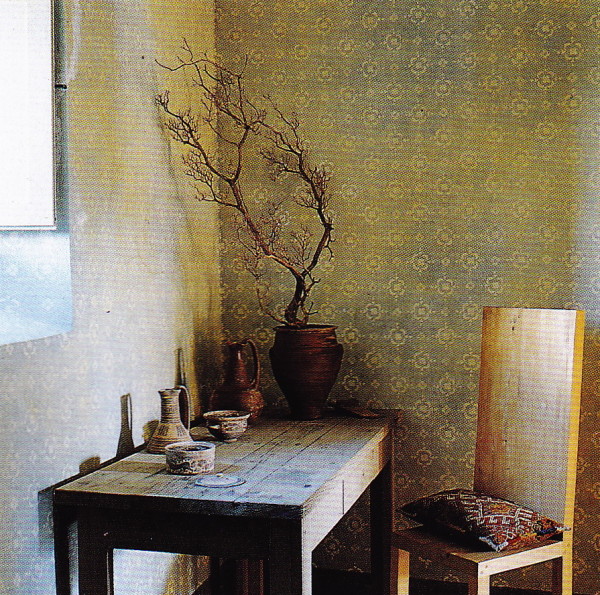 Simple, stark furniture was chosen by Peretti and Mongiardino for a corner of the guest room with stenciled walls.

Next stop on our tour of Tuscany is the classically-inspired Villa delle Rosa, the holiday home of the Ferragamo clan, of the luxury leather goods and fashion empire.