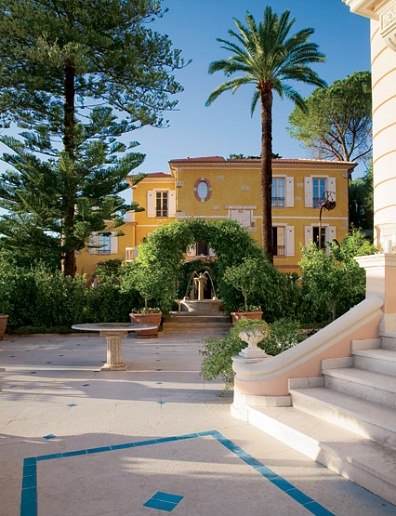 Konstantin and Natasha Kagalovsky had set their eyes for some time on the blush pink Belle Époque era villa next door to their own, Villa Mona – a golden-ocher villa built in 1902 with access to a private beach – on Saint-Jean-Cap-Ferrat.  “We were thinking how nice it would be if one day we could join the gardens together, have more rooms for guests and generally be more private … [and] then the villa did become available, and I didn’t hesitate” remembers Natasha Kagalovsky, a Russian by birth who had lived many years in the United States. 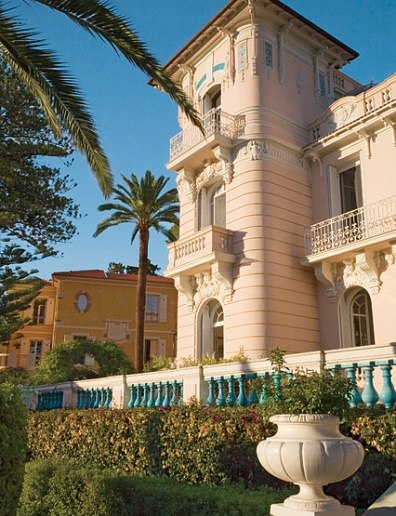 And so the story of Villa Corinne unfolded, revealing interiors evocative of 1930’s glamour that had been untouched for years. The Kagalovsky’s acquired the villa with the best of its furniture and called upon Nicky Haslam, who decorated their London home, Stanley House, to assist with restoring the villa to its former glory. “It had charm, but it was dilapidated. We stripped it to the bare architecture,” Haslam said. 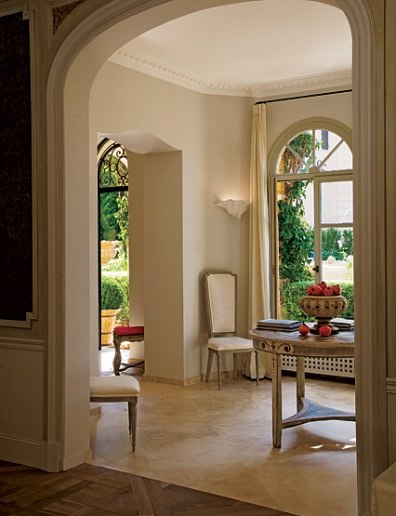 Nicky Haslam’s design program was to recapture the glamour of the 1930’s in an easy, relaxed fashion, referencing French Vogue magazines from the 1930’s for inspiration that had been left behind at the villa. Along with his assistant, Colette Van den Thilart, Haslam infused the villa’s interiors with the ease and elegance of the Côte d’Azur during its heyday with an eclectic and unexpected mix of furnishings, objets d’art and decor.

In the anteroom, above, off the entrance hall, Haslam installed an antiqued-stone floor and a plaster cornice, with an overscale egg motif he created. “The space is an exercise in restraint, with just a splash of color and pattern,” he points out. The painted table is Italian; the high-back chairs are French. (Photo by Derry Moore; description of room by Michael Peppiatt for AD) 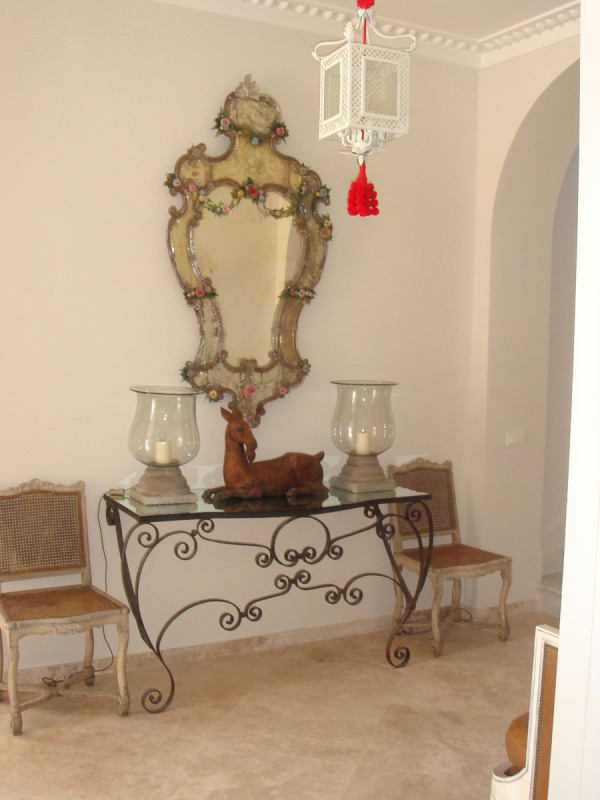 The simple and fanciful co-mingle in the entrance hall. (Photo via NH Design)

“It was imperative the salon be glamorous,” Haslam says. Sheets of lace were silvered and decorated with mica and set into the wall panels. (Photo by Derry Moore for AD). 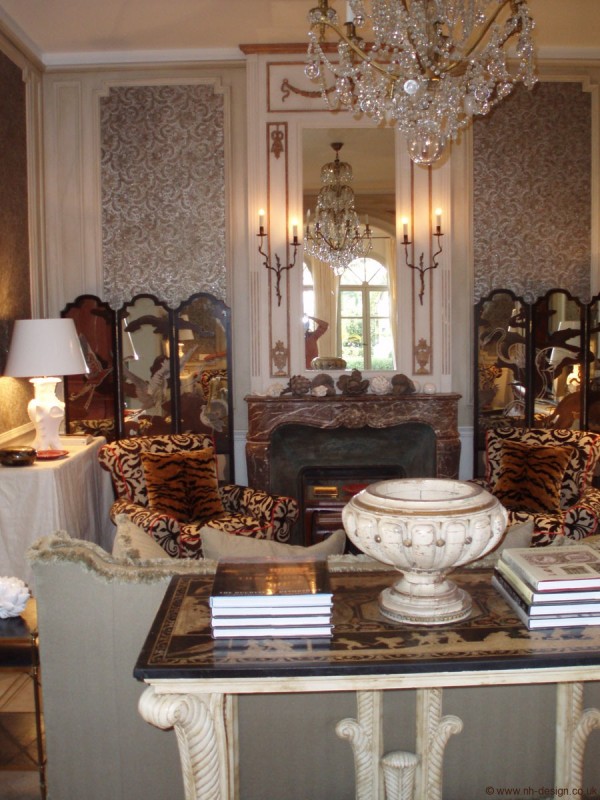 The glamorous main salon remains the gathering place for guests and family, as it did in the 1930’s. “Shimmering grandeur is what characterizes one of my favorite interiors – the Amalienburg Palace in Munich. Here it’s more lighthearted, of course”, said Haslam. (Photo via NH Design) 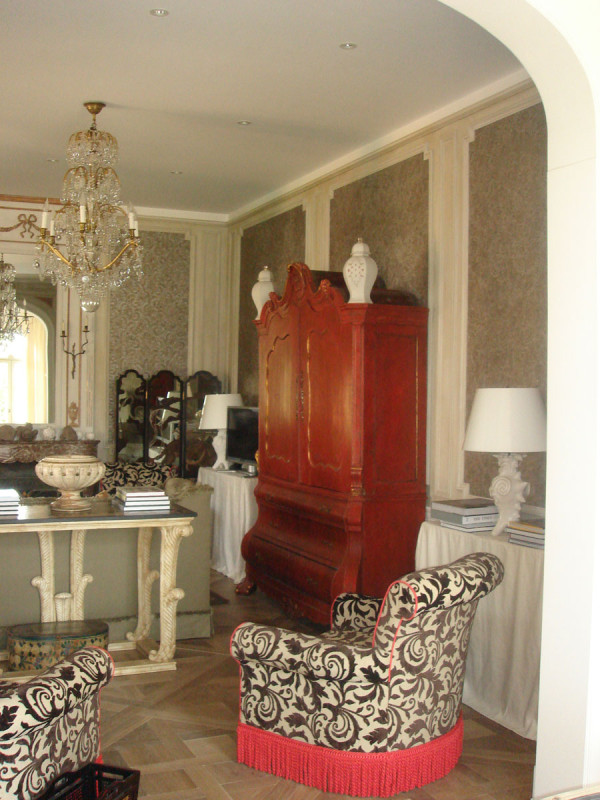 Another view of the salon shows its flirty, sexy side. (Photo via NH Design) 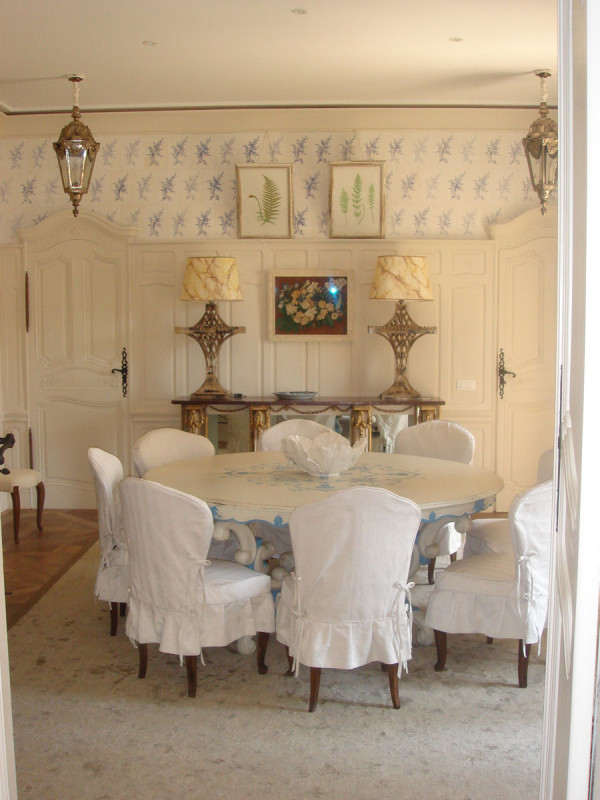 The dining room has a decidedly more relaxed, Swedish country atmosphere with its pale color scheme and flouncy white slip-covered dining chairs. It “was a gloomy 19th-century affair,” says Van den Thillart. To lighten and unify the space the wood was white-washed and a delicate pattern was painted on the walls to resemble tiles. The shapely white dining table with blue painted flourishes adds another lighthearted note. (Photo by Derry Moore for AD). 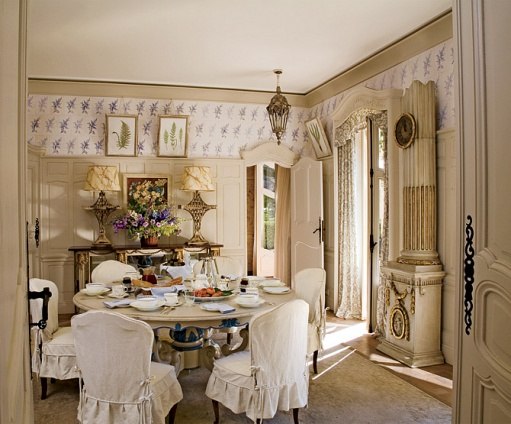 Another view of the dining room with its neoclassical country house clock. (Photo via NH Design)

The design of the garden room pays homage to Elsie de Wolfe. “It’s the kind of space Elsie de Wolfe would have adored. The trellis seemed an obvious choice for the walls”, said Haslam.  Bamboo patterned paper was hand-cut and applied to painted walls.  The rock-crystal chandelier is original to the villa. The total affect is quietly elegant and luxurious yet never lavish. (Photo by Derry Moore for AD). 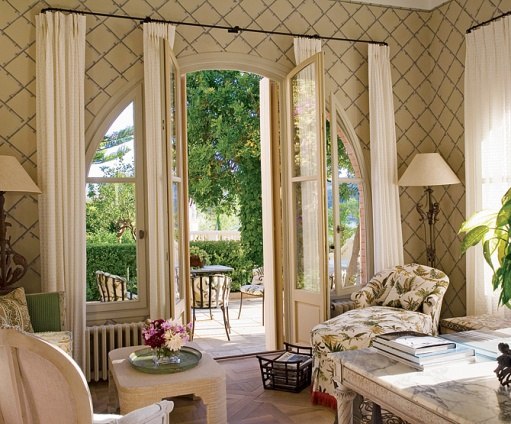 Arched French windows frame the room’s view of a terrace. A fern-pattern chintz covers the chaise, which Haslam designed. (Photo by Derry Moore for AD). 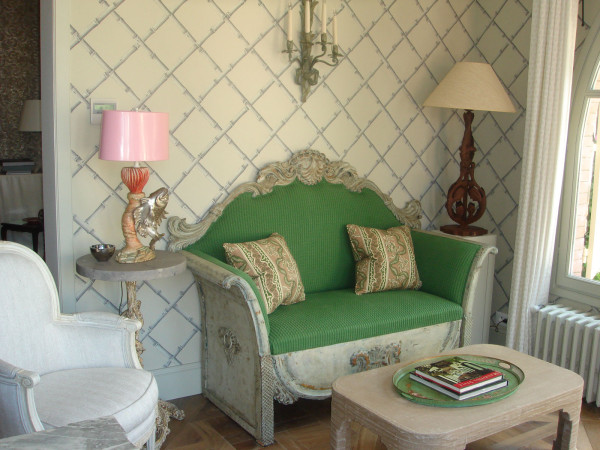 A corner arrangement (visible in the above photo on left) with shots of Riviera color and a whimsical selection of furnishings and objets d’art. (Photo via NH Design) 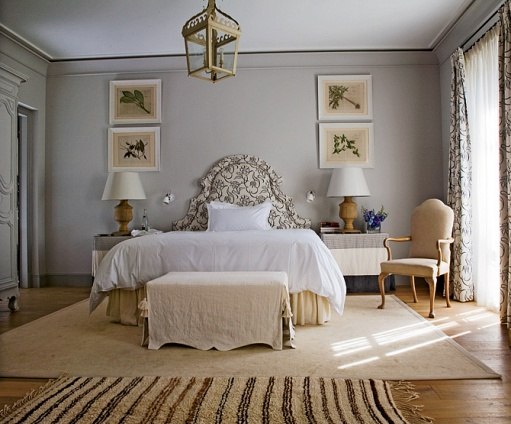 The inspiration for a bedroom “was the cover artwork on a series of vintage French Vogue magazines,” Haslam says. “The colors were glorious. We made the walls the sort of shade I love: a barely there palette of mauves and grays that change with the light.” (Photo by Derry Moore for AD). 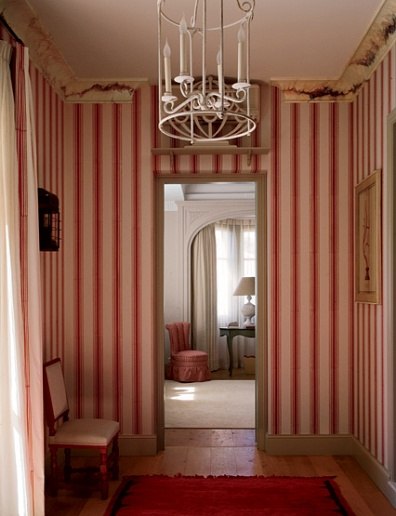 “The bedroom is white on white, so we wanted to make a statement of color and pattern at the entrance,” Haslam explains.  (Photo by Derry Moore for AD). 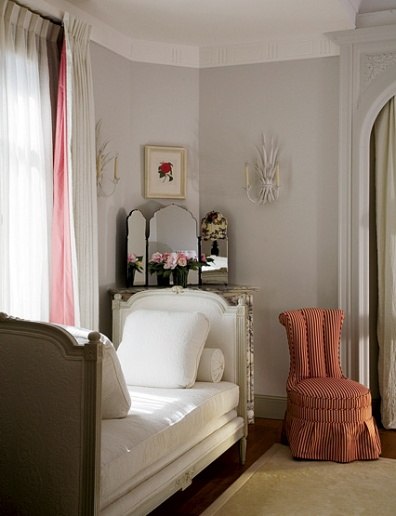 Jazz-age glamour informs a small room with a painted daybed, which was purchased with the house, upholstered in white matelassé. (Photo by Derry Moore for AD). 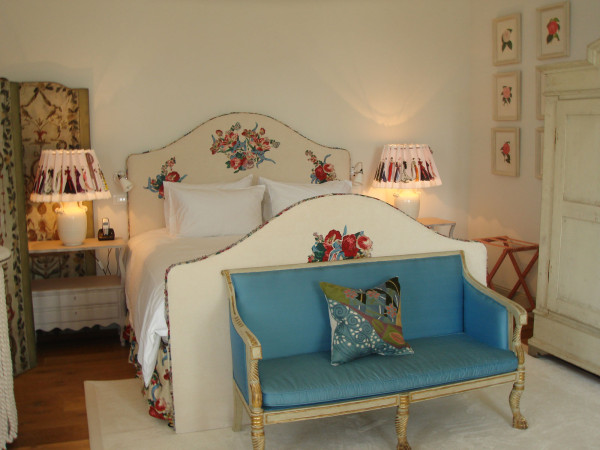 Each bedroom has its own distinctive personality. Vintage floral textiles and pleated lampshades with a pattern of women in gowns is a throwback to the popularly feminine style of a 1930’s boudoir. (Photo via NH Design) 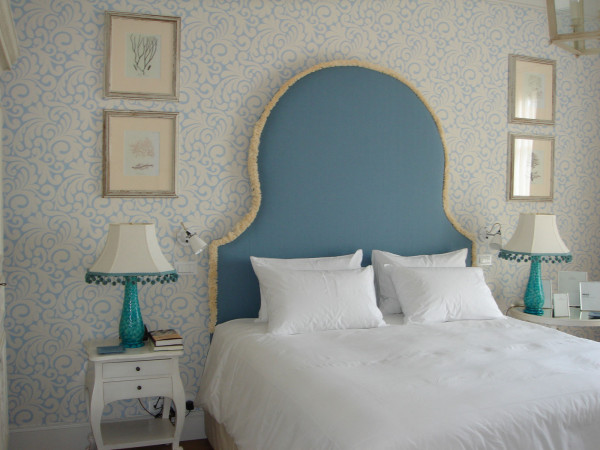 Another guest room in shades of the sea and sky. (Photo via NH Design) 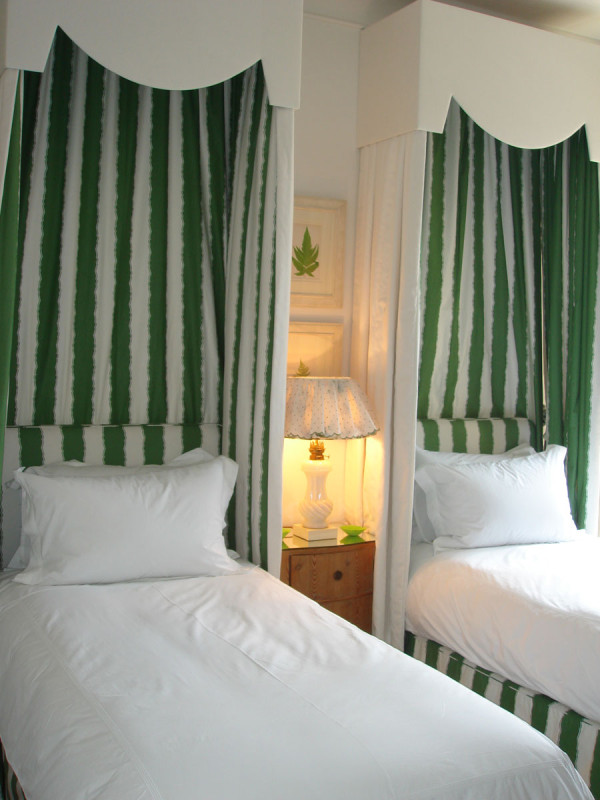 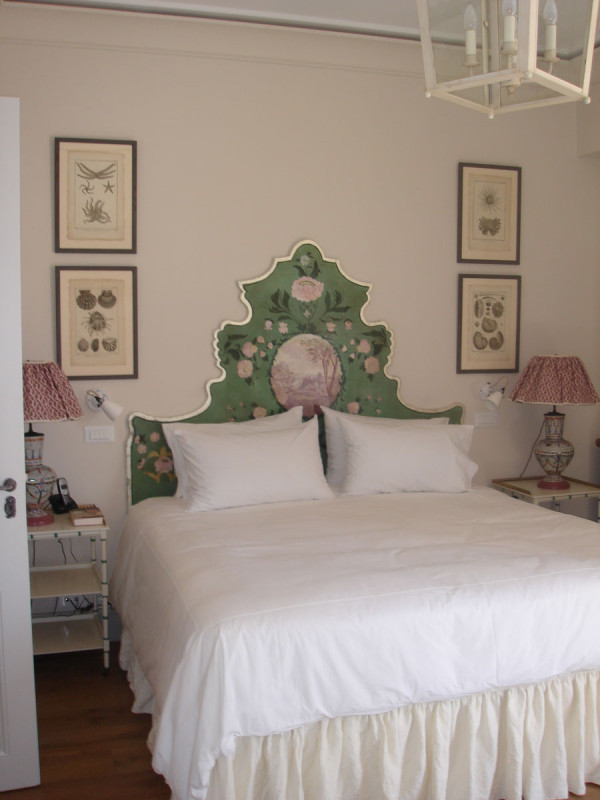 Another guest bedroom with feminine appeal. (Photo via NH Design). 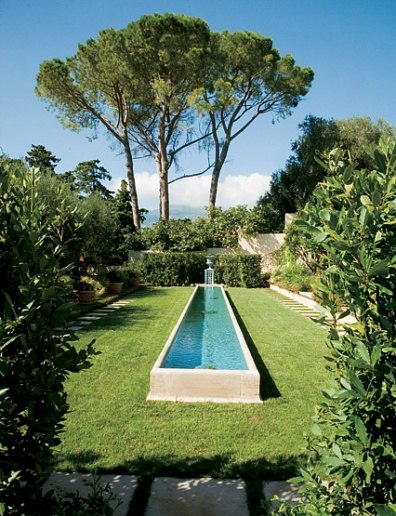 Landscaping here, on the upper terrace, and throughout by Jean Mus. (Photo by Derry Moore for AD). 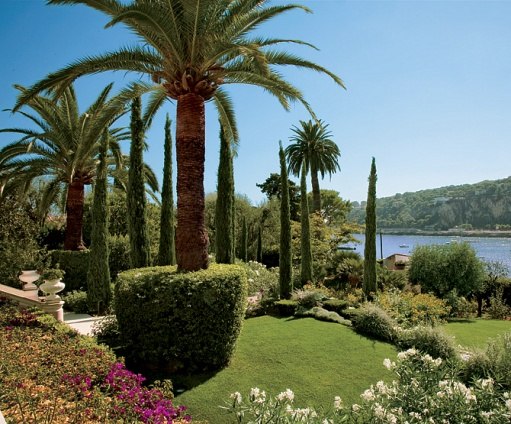 The grounds of Villa Corinne and Villa Mona leading to the bay of Saint-Jean-Cap-Ferrat.

Riviera Style will conclude with Oscar Niemeyer’s Modernist masterpiece on the Côte d’Azur brought back to life by Peter Marino.