The Toujours Provence series comes to a close with Janet de Botton’s extraordinary Provencal bastide and surrounding farmland in Les Baux, the rugged Southwest region of France, oft blogged about since its appearance in Vogue a few years back. Intent on finding a property with views – as opposed to the usual ones protected from the hot summer clime and the wrath of year-long mistrals utilizing walls of plane trees, shaded courtyards and stone houses with small windows – Janet and her late husband Gilbert discovered a vast estate with views over Les Baux’s barren, rocky landscape toward the Camargue.

With the assistance of French decorator and landscape designer Jean-Louis Raynaud and his American partner Kenyon Kramer the de Botton’s created the ne plus ultra of romanticized country life with spacious, light-filled interiors evoking simplified elegance and restraint, and expansive gardens – including an elaborate late-17th-century-style box maze, an allée of more than three-hundred plane trees, an 18th-century Romanesque temple, a grove of ancient Spanish olive trees, a lake framed by apple trees and Japanese maples, a potager and, of course, fields of brilliant lavender. 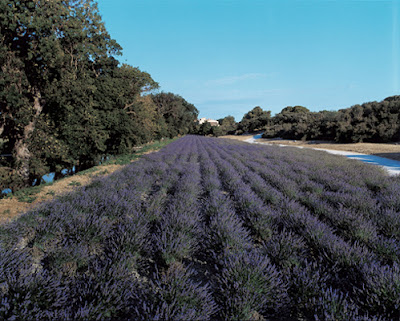 The de Botton rooms are a decorative departure from the rustic chic simplicity featured prior, yet they share the same understated sophistication. These are prettier, more romantic rooms to be certain, but they are carefully edited, subtle and refined; and the colors selected for them link to lavender in the fields, the blues of the hydrangeas in the potager, the irises lining paths, and the pinks of climbing roses. 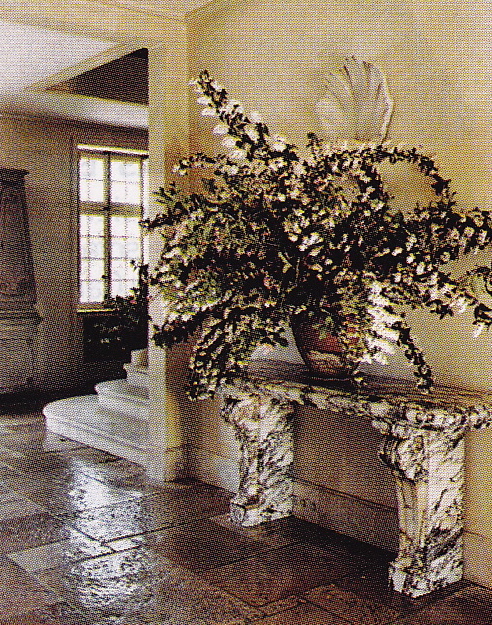 The entrance hall’s marble console is set with spring flowers from the garden. 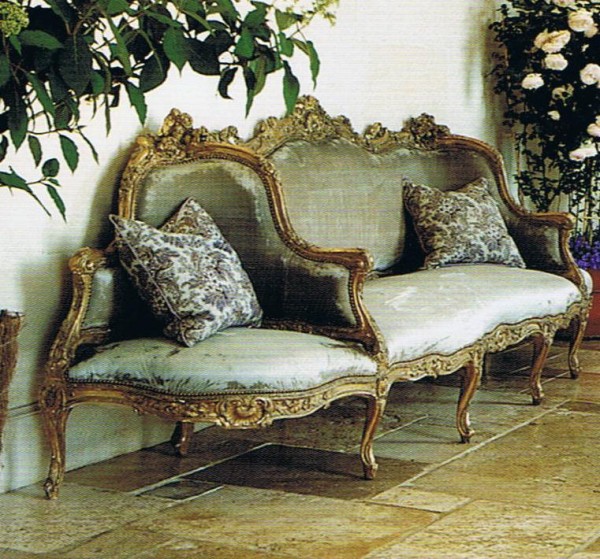 A Louis XV sofa and potted roses in the entrance hall. 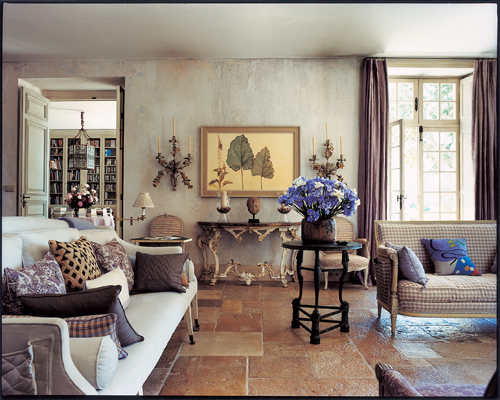 Soft mottled gray walls, earthy tile floors unadorned by a rug, and simple neutral fabrics provide a serene background for a pair of Louis XVI chairs flanking an 18th-century console table and an early 19th-century English sofa, on left, in the drawing room. The leaf painting is by Carolyn Sergeant. 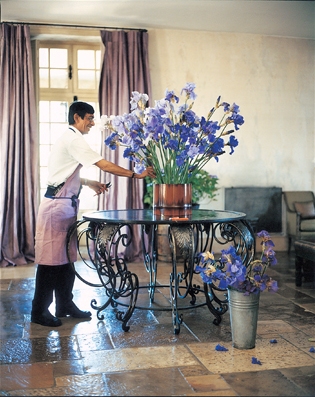 Kol, the butler, arranges irises in the drawing room.

Louis XVI marquises and a Directoire sofa in the drawing room. The mauve linen curtains are from Nicholas Haslam, London. 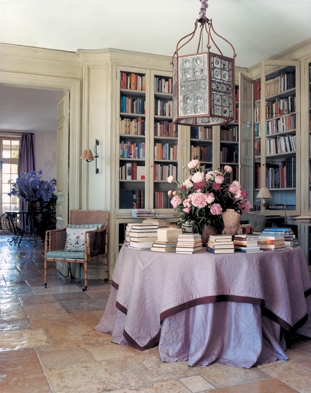 Not a fan of draped tables as side tables I am attracted to ones used as center tables. I think they work especially well in foyers where there is not often the opportunity to use upholstered pieces, which helps soften the hard surfaces and right angles. The one featured here is used in the library and accomplishes the same objective with an inviting dusky shade of lavender. The interesting lantern was found in an antiques shop in London. The pretty flowers are nice but I can’t think of anything more inviting than the adventure of leafing through stacks of books. 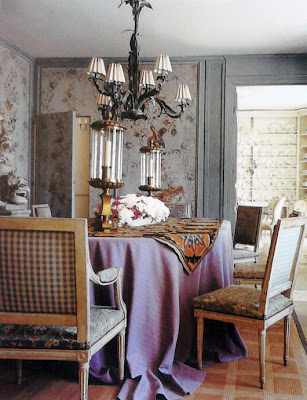 Another view of the dining room with Louis XVI chairs covered in their original Aubusson tapestry. The warm glow of the tapestry layered over the lavender draped table is a fetching nod to the past. 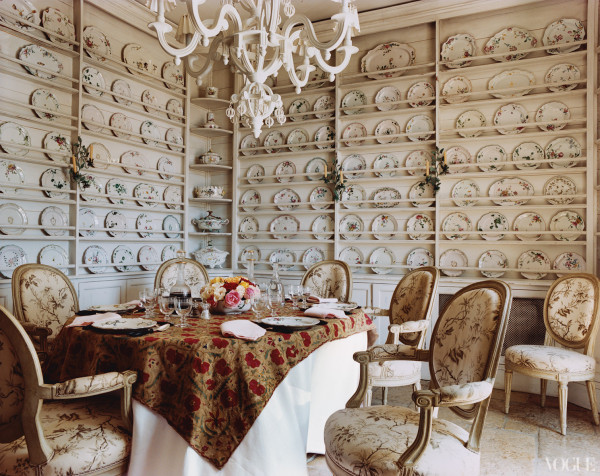 The decorating scheme for the breakfast room was inspired by a dining room Janet’s friend Susan Gutfreund had seen in Sweden lined with porcelain, which initiated a collecting spree of 18th-century Marseilles faience. What makes this room so enchanting is its soft, creamy color scheme, like butter frosting on a cake, while the layered tapestry adds a dose of vigor. The delicate open design of the candle sconces compliment the tracery of the chairs subtly patterned upholstery. 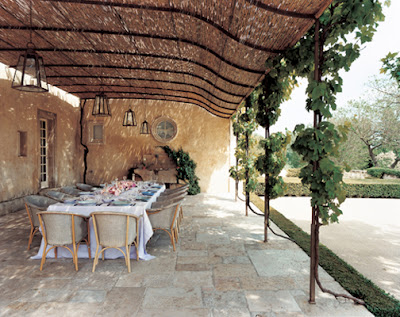 Perhaps the most inviting form of dining is alfresco, achieved beautifully here on the outdoor dining terrace, protected by a split-reed-and-grapevine slat cover, softened with climbing vines. 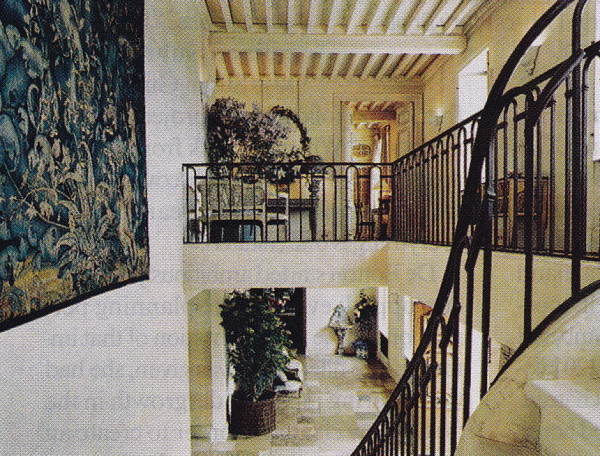 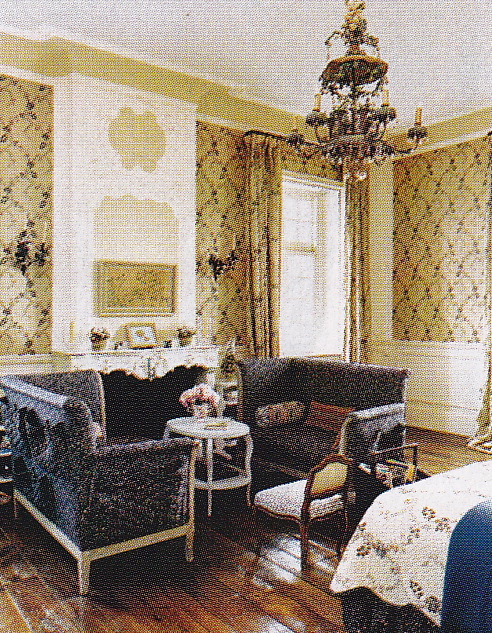 A late-19th-century fantasy chandelier hangs in the blue-and-wheat master bedroom. 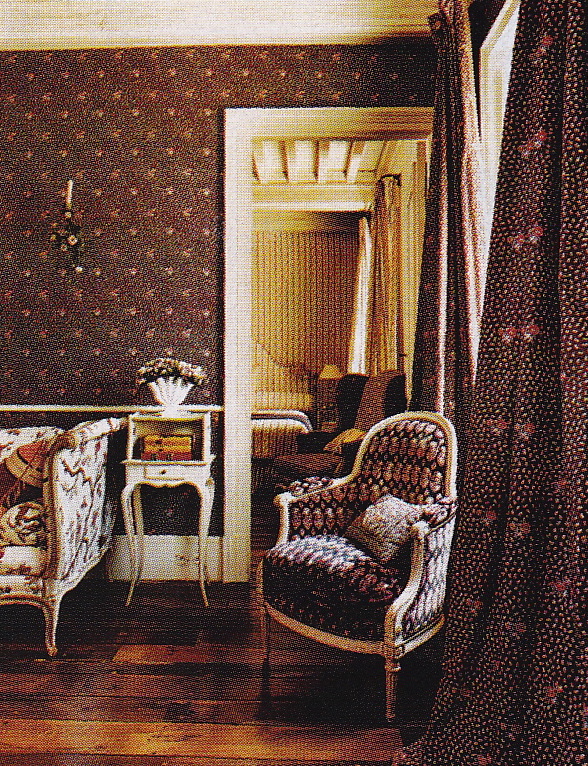 A dark color scheme of brown and brick-red with stylized floral patterns in a guest room compliments the light, creamy simplicity of the adjoining guest suite.

In Provencal tradition an all-over pattern defines this guest room with a 1940’s chair adding a note of glamour. 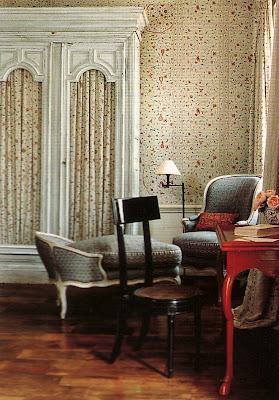 Another guest room utilizes an all-over pattern with splashes of red, accentuated by a glamorous red lacquer desk. 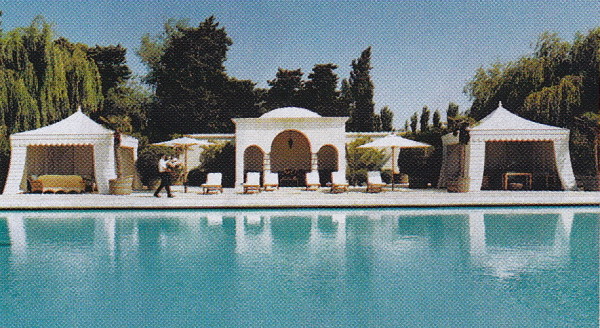 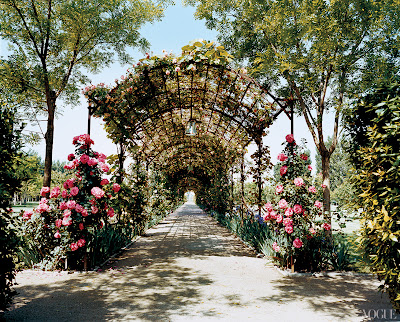 Lavinia roses flank the entrance to the main allée of the rose pergola, under-planted with irises, in the potager. 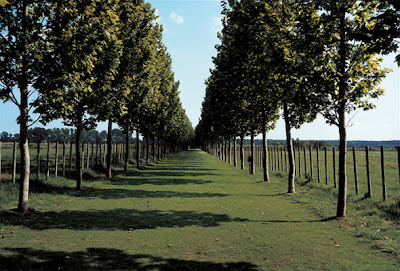 An allée of plane trees leads to the Romanesque temple. 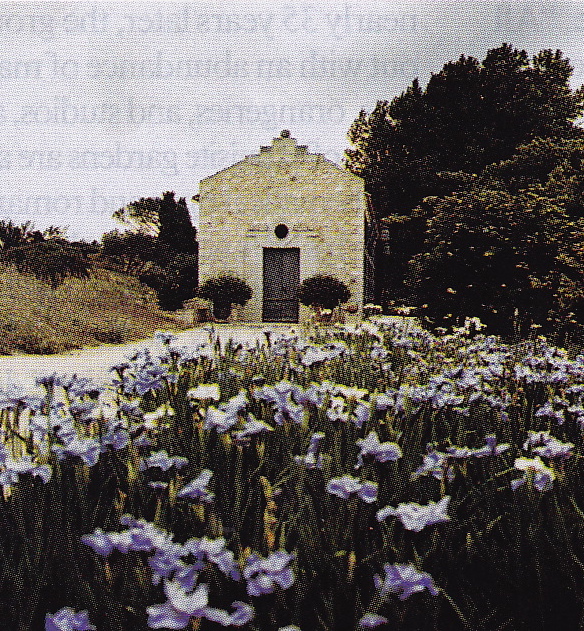 Spring irises line the path to the chapel. 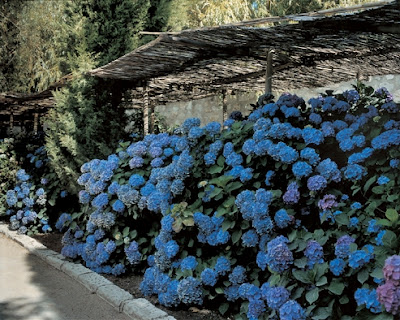 Banks of hydrangeas in the potager. 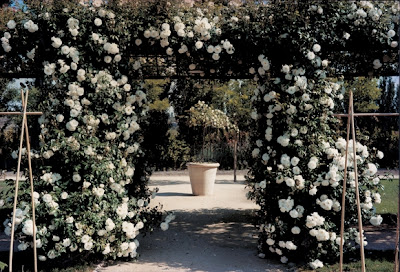 Adelaide d’Orleans roses bloom on an arbor in the potager. 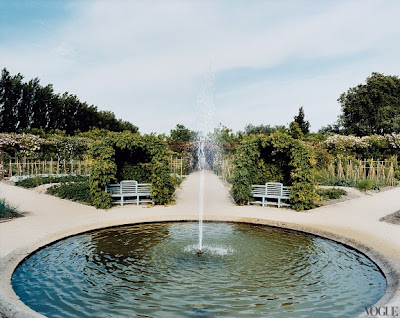 A fountain centers the elaborate potager, its layout inspired by the work of Lady Mary Keen at Lord Jacob Rothchild’s Buckinghamshire estate, who assisted with the design here as well. 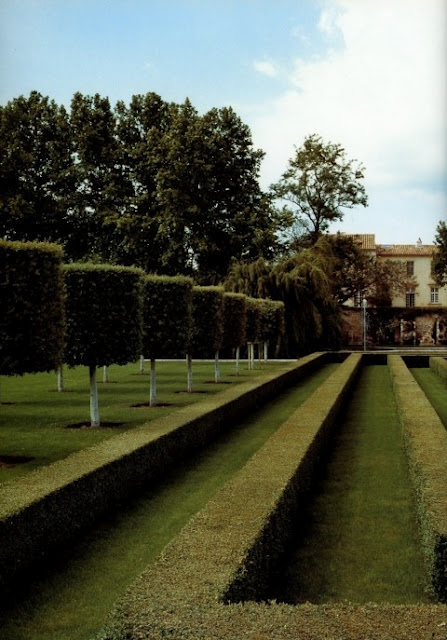 The box maze was created in the late-17th-century manner, inspired by the legend of the Minotaur in relation to the region’s tradition of bull-fighting. 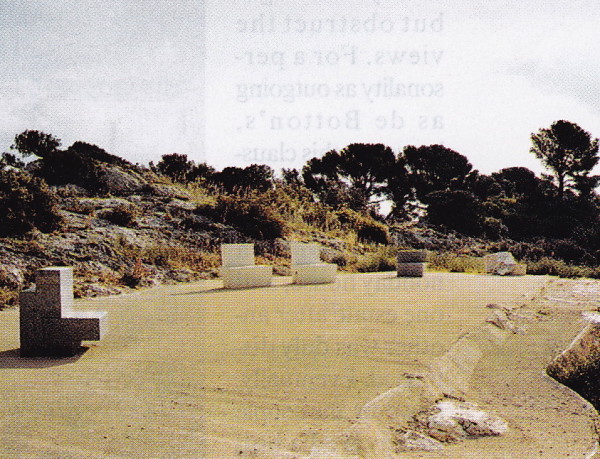 Ravanet, the stone guest house where the de Botton’s lived during renovations to the main house. 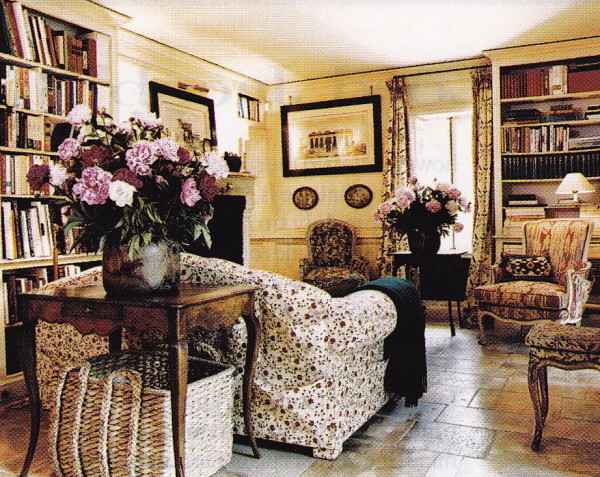 The sitting room at Ravanet has a relaxed garden theme and Provençal simplicity.