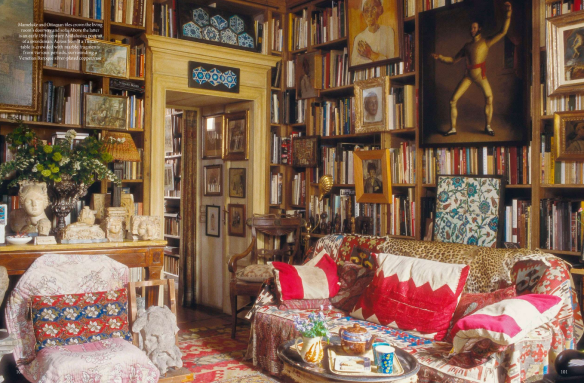 Often we sense or know when something is amiss. Sometimes it is a gut reaction, or intuition if you will. Other times the signs are there before us, but we choose not to notice them, or we put them off to a time in the future when we can better address them. Umberto Pasti knew the prognosis but put off the inevitable as long as possible. No, Pasti wasn’t dying some frightful curse. But his Milan residence was. Due to the weight of his collections, namely books, his apartment was sinking. Unless structural changes and reinforcements were made he may, on any given day, find himself falling through into the apartment below. Enter doctors of architecture and maestros of atmosphere, Roberto Peregalli and Laura Semini of Studio Peregalli.

The inviting, processional entrance hall greets visitors with a collection of Ottoman dishes on the far wall, beneath which sets an early 16th-century Lombard marble bust of a Roman emperor. An iguana rides a stuffed crocodile from a 17th-century cabinet of curiosities, which rests on a Sicilian gilt-wood banquette from the 18th-century. 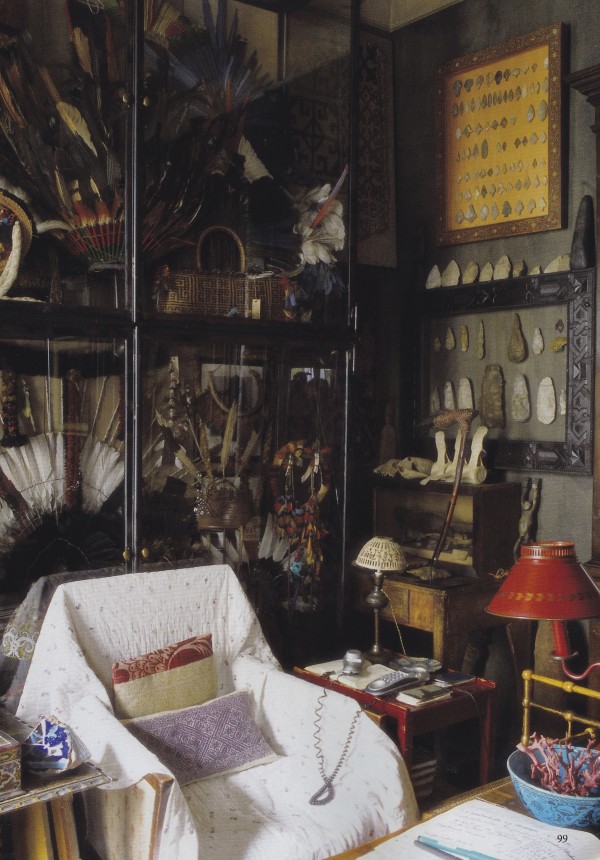 A glass vitrine in the entrance hall displays a collection of feather headdresses from Amazonia, Borneo, New Guinea, and the Plains Indians.

One can empathize with Pasti, an author, and his partner Stephan Janson. Every surface is brimming with collections and books – thousands of books. The mere thought of having to pack all of it up, place it into storage, move it into temporary arrangements, and then have to unpack and replace it all makes me terribly irritable.

In the living room, shown above, Mameluke and Ottoman tiles rest above the doorway and sofa. A Venetian Baroque silver-plated copper vase centers on the table at left which is covered with marble fragments from various periods and places. 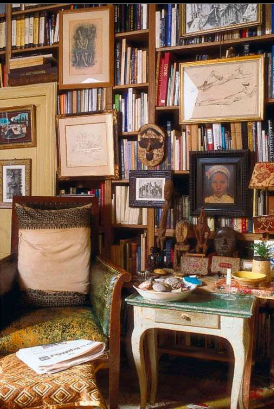 Above the painted table from Le Marche and leather chair from Lombardy hang masks and sculptures from Africa and New Guinea. The painting directly above the masks is of a Marrakesh prostitute by James McBay. 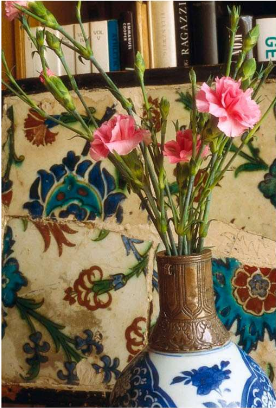 A Chinese Transition vase is set before an Iznik tile fragment.

Over the door in the living room leading to the kitchen hangs a Tuscan painting depicting a witches’ Sabath. A portrait of David Herbert painted by Nora Auric hangs to its left.

The siting of the apartment is not discussed by Pasti in the article he wrote for The World of Interiorsso I cannot say one way or another if I would simply choose to move to another location in favor of moving back to one that requires restructuring. It must be accepted that the apartment and location are worth the trouble, at least for this couple who, admittedly, do not invite change. Don’t expect drop-dead views or architectural wonders. It is not about the apartment or its amenities. It is about atmosphere. And there is no one, singular or plural, who does it better today than the team of Studio Peregalli. Protégés of Renzo Mongiardino, Roberto Peregalli and Laura Semini bring the same theatrical atmospherics to their rooms as did their mentor by romancing the past with an acute understanding of and deft skill at articulating Romantic and Classical Revival styles. In the case of this modest apartment classicism is eschewed for atmosphere by means of a decorative renovation where the partners vast collection of African sculptures, Roman marbles and Islamic ceramics take center stage, all encased in books. Many books. Now that’s my kind of atmosphere. 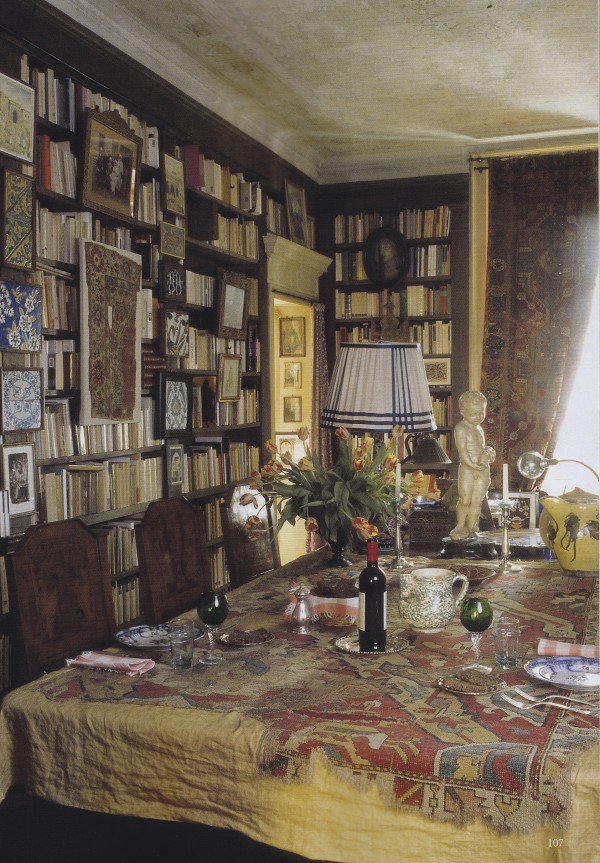 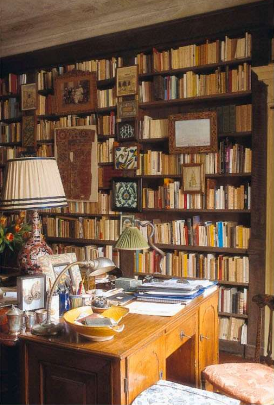 A bronze Art Nouveau lamp in the shape of a snake that once belonged to actress Eleonora Duse sits on an early 19th-century Italian desk given to Pasti by his mother.

In a bedroom an 18th-century Roman bed sets against painted walls resembling aged tile. A golden metal “rope” chair that once belonged to Stephen Tennant sits before a humble painted wood bedside table. 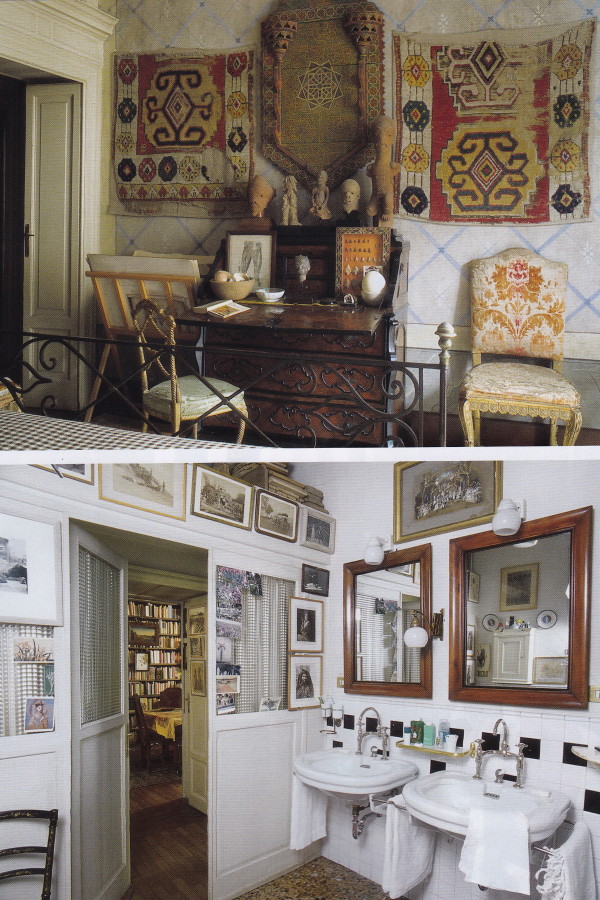 A painted wood gun holder from Tétouan flanked by fragments of a pre-18th-century carpet from Konya are hung above  an 18th-century Lombard walnut root chest displayed with African terracotta figures. In the bathroom are a pair of sinks  salvaged from a hotel in South Tyrol. Stacks of books with nowhere to live reside on a “mezzanine” above the partition between the bathroom and bedroom. 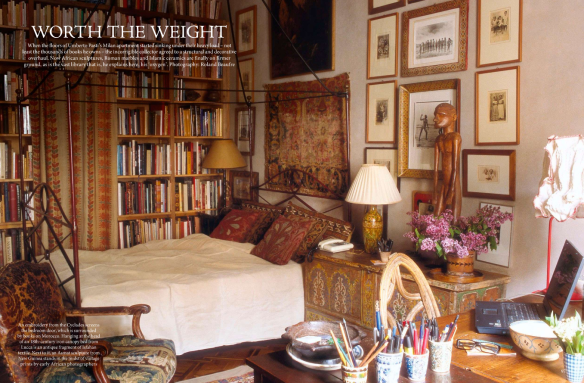 An embroidered textile from the Cyclades serves as a portière on a door set between bookcases stocked with books on Morocco, where the couple also own a villa and guesthouse. Hanging at the head of an 18th-century iron canopy bed from Lucca is an antique fragment of an Isfahan textile. An Asmat sculpture from New Guinea stands before vintage prints by early African photographers.

A remarkable sense of history pervades rooms fashioned by Studio Peregalli, alchemists at perfecting imperfection with a sense of age and patina and poetic compositions that appear more accidental than self-conscious. Layered, atmospheric, and soulful – these room are designed to grow old.

This concludes my five-part series of Cabinets of Wonder. I hope they piqued your curiosity!

Descriptive content courtesy of The World of Interiors, March, 2013. Photography by Roland Beaufre.