Lorenzo Castillo’s 11,000 square foot duplex apartment within a 17th-century neoclassical palace in Madrid (which had also served as convent and warehouse for theatrical costumes) has been featured in numerous design publications over the past few years. I recall the emotional pull of these rooms the moment I peeled a page of the U.S. edition of Elle Decor and discovered them for the first time.

There is something utterly unique and unaffected about Lorenzo Castillo’s eye for design. He is a maestro at creating collected environments where pedigreed antiques mix with vintage pieces and modern art, and sophisticated color schemes and jazzy geometric patterns are paired with time worn textiles.  His rooms feel at once classical and up to date, old world and glamorous. They are clever and innovative yet never appear artificial or contrived. They possess the soul of the Mediterranean. They are rooms to discover and rediscover. And it appears that one would be wise to come back often because from one moment to the next Castillo moves a chair from here to there, or sells a piece or two. Palacio de Castillo is, after all, his design laboratory, home and showroom gallery. 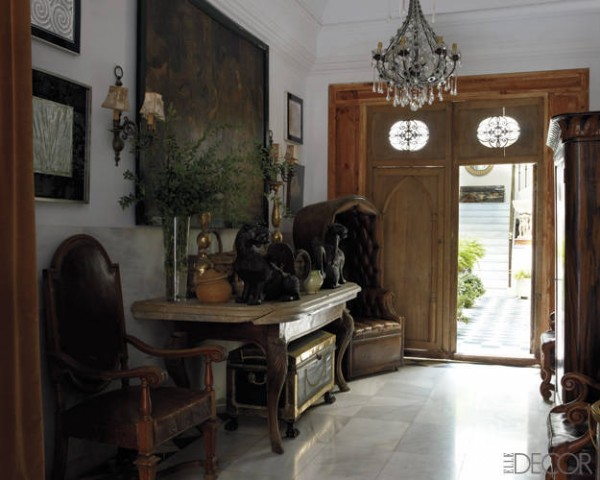 In the foyer, an 18th-century table is flanked by a Spanish 17th-century armchair and a Victorian porter’s chair; the Baguès chandelier is 1940s. 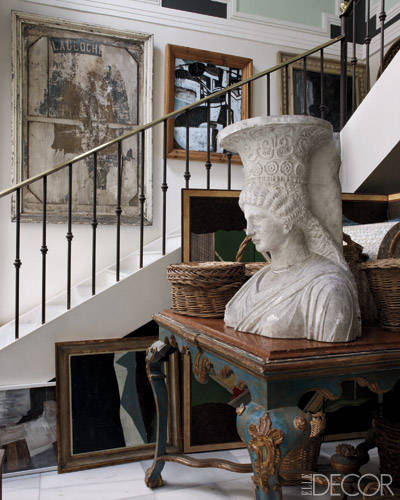 A plaster bust from the École des Beaux-Arts in Paris is displayed in the stairwell on an 18th-century table from Burgos Cathedral. 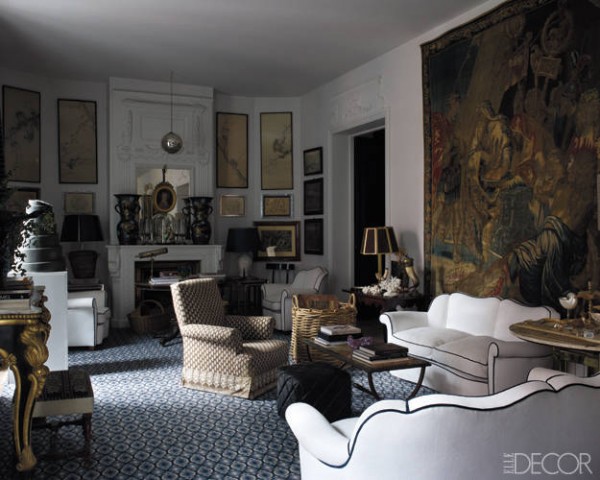 The drawing room’s tapestry is by Rubens; a pair of 1940s sofas flanks a Willy Rizzo side table, the sculpture is by Raúl Valdivieso, and the rug was inspired by a vintage design. 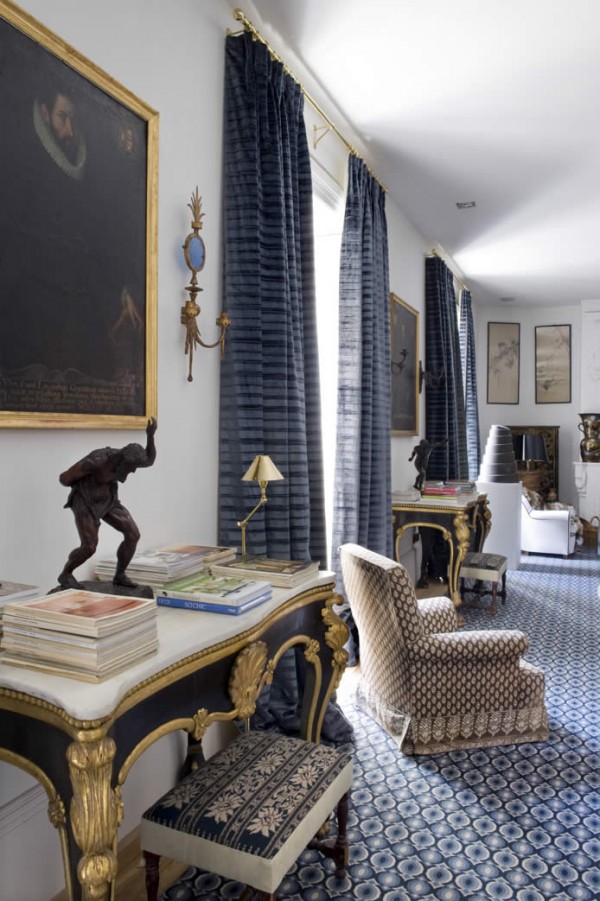 An alternate view of the drawing room showcases Castillo’s adept hand at mixing styles and pattern. He cleverly and successfully distributes color, style and form evenly throughout the composition, creating a continuous dialogue from one vignette to the next. 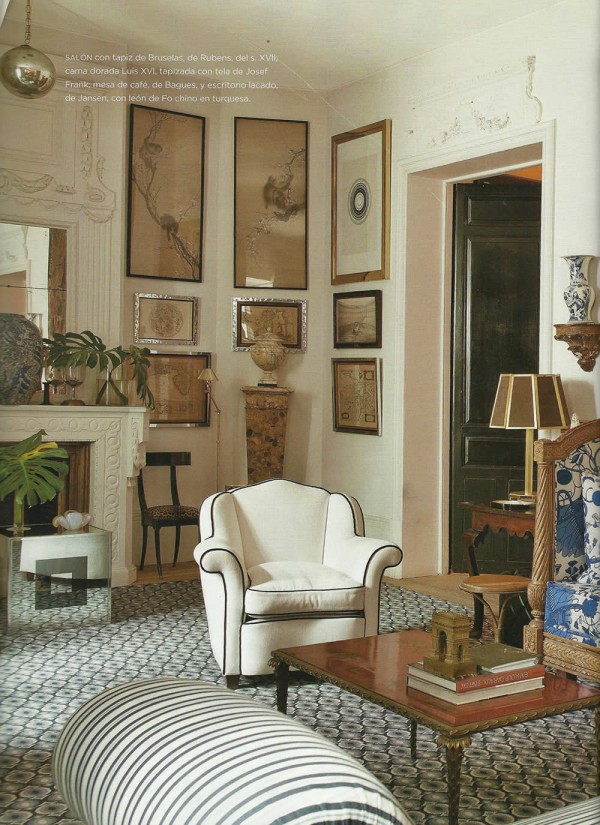 A view of the drawing room recorded at a different time reveals another arrangement of furnishings. 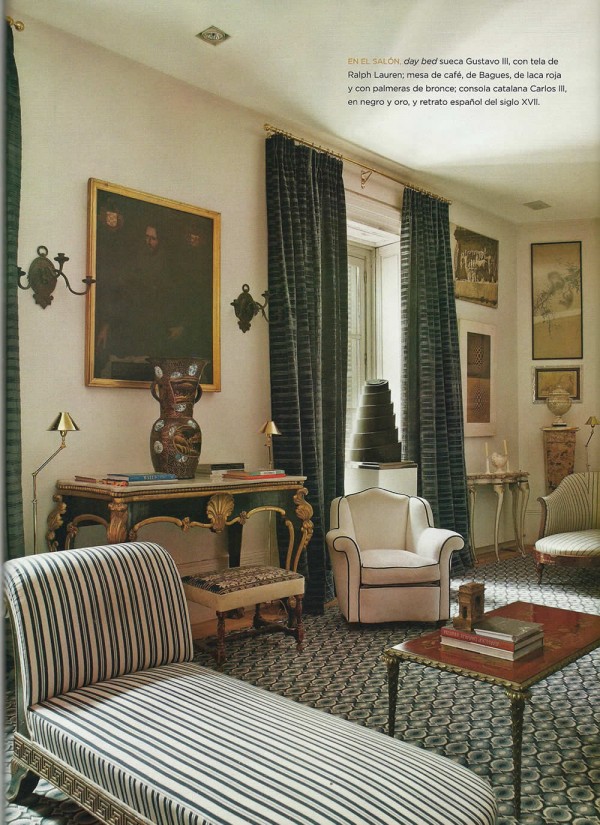 And again, from the same article, an alternate view showing a Greek revival style chaise longue. 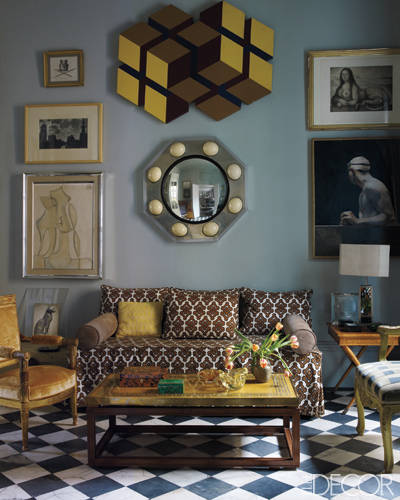 In the sitting room, a steel-and-ostrich-egg mirror hangs above a sofa upholstered in a 1960s David Hicks fabric; the Jacob Frères armchair is covered in a Rubelli velvet, and the cocktail table is from the ’70s. The artworks include paintings by Xavier Vilató, bottom left, and José María Yturralde, center, and a Josep Maria Subirachs engraving and Miguel Macaya painting, right.

An 18th-century rug covers a table in the entrance hall; the bench is in the Régence style, the desk is by Marc du Plantier, and 18th-century engravings fill the walls. 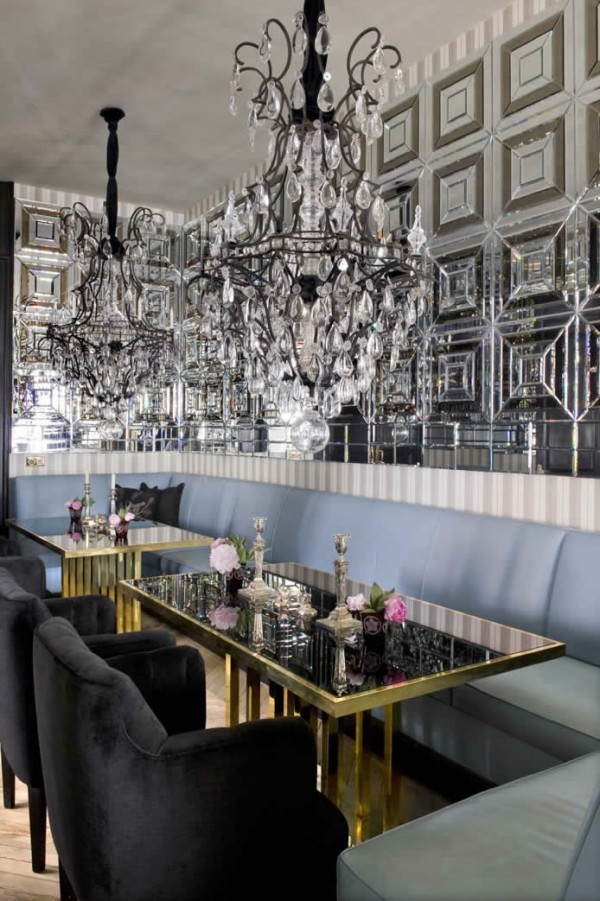 The armchairs, tables and mirrors in the glamorous dining room are by Castillo, and the light fixtures are 19th-century. 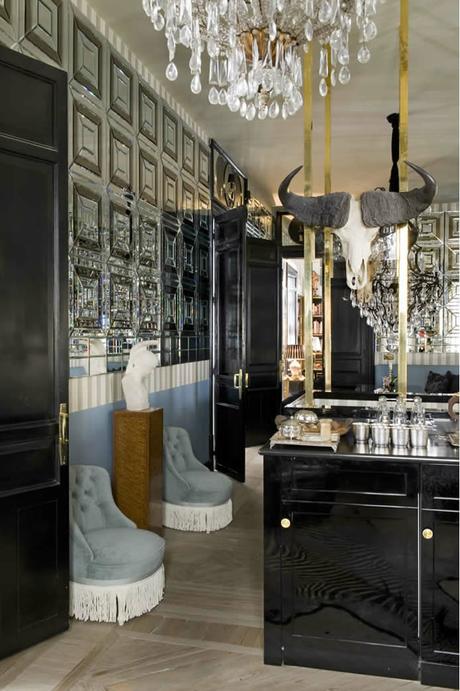 The bar service area of the dining room. 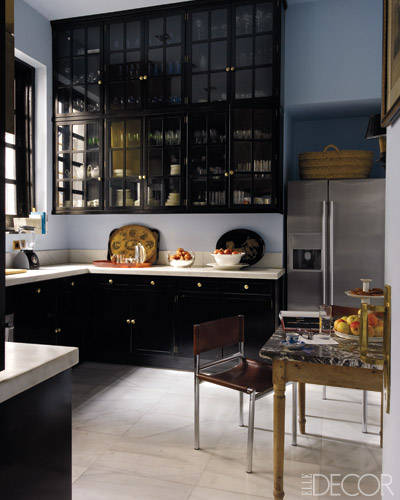 A Louis XVI marble-top table and 1970s Italian chairs in the kitchen; the lacquer cabinetry is custom made, and the walls are painted in Farrow & Ball’s Lulworth Blue. 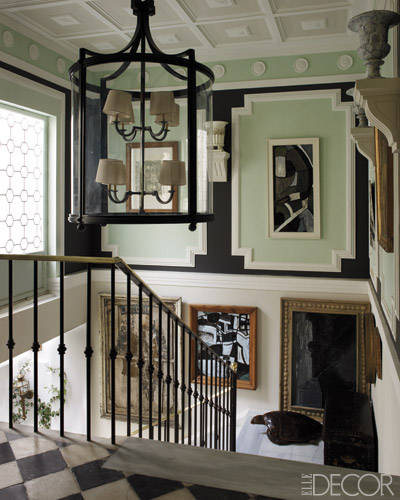 A lantern designed by Castillo hangs above the staircase leading to the gallery, and the abstract paintings are by his brother Santiago. 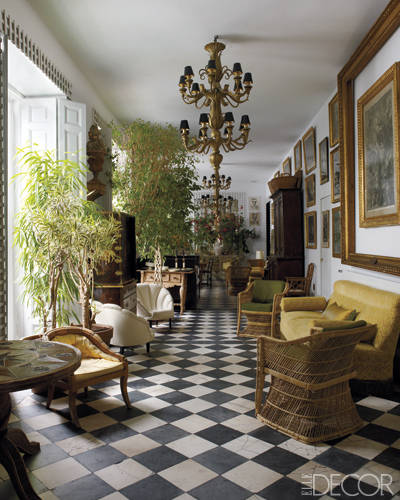 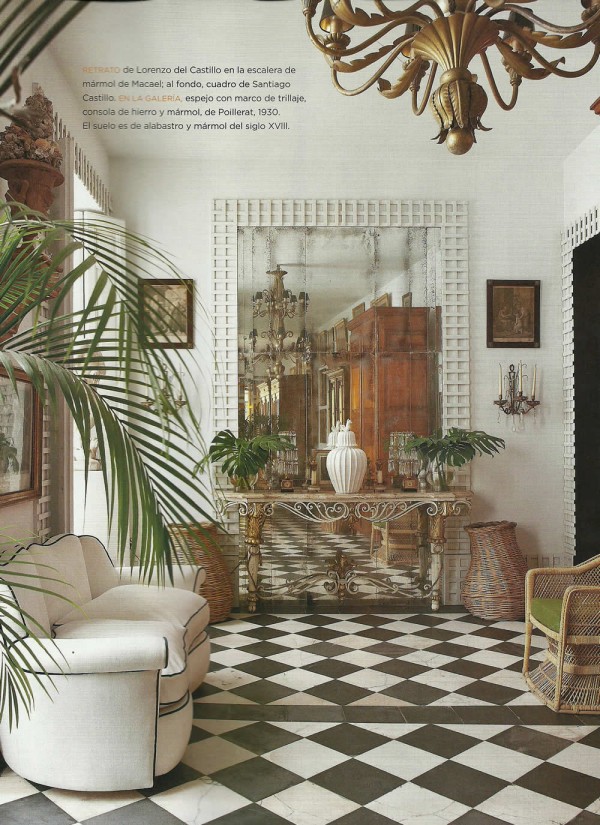 A vignette in the gallery from an earlier time. 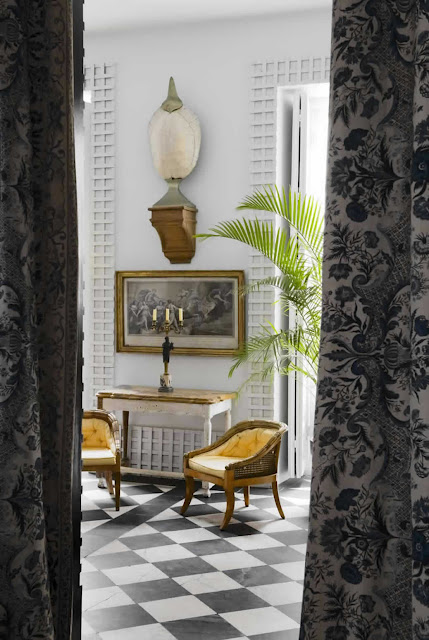 Another vignette in the long gallery. 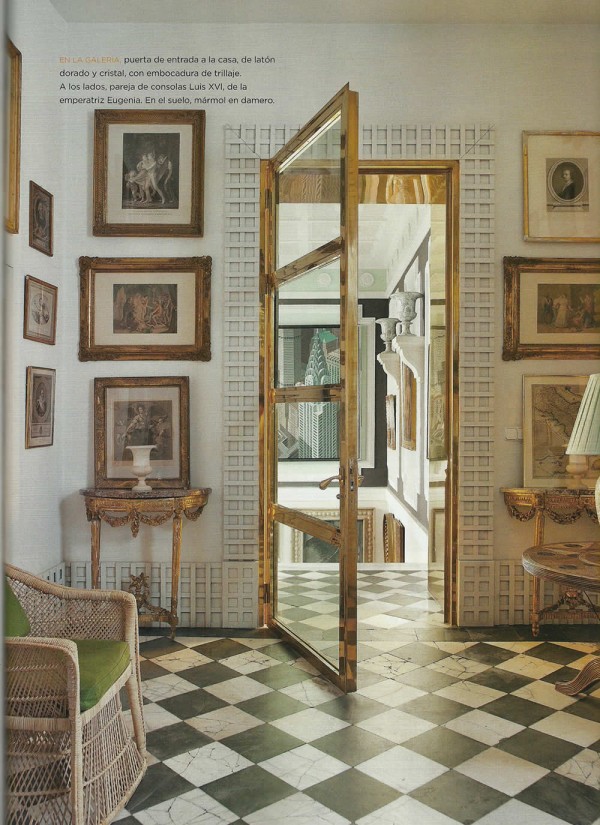 A door leading from the upstairs gallery to the stair hall. 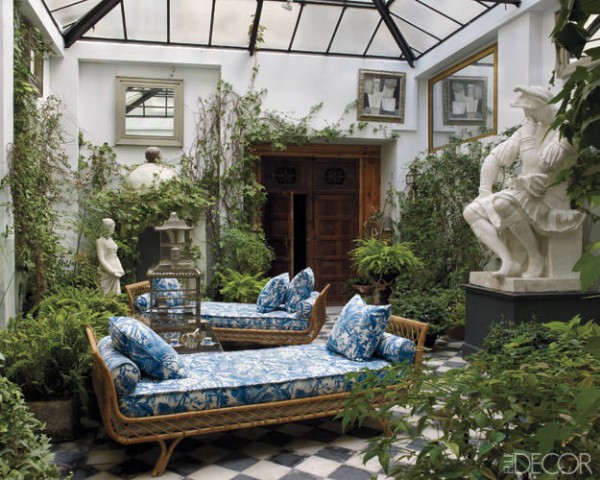 In the courtyard, 1960s Jansen daybeds are upholstered in a Madeleine Castaing fabric, the cast of a Michelangelo sculpture is from a Paris flea market, and the Gothic Revival doors are 19th-century Spanish. 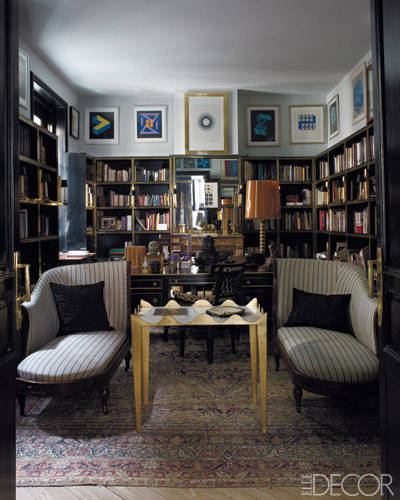 Charles X–style chaise longues from the 19th century flank a Garouste & Bonetti table in the library; Op Art prints and paintings by ­Yturralde and Victor Vasarely hang above lacquer-and-brass shelves designed by Castillo, and the Persian rug is 18th century. 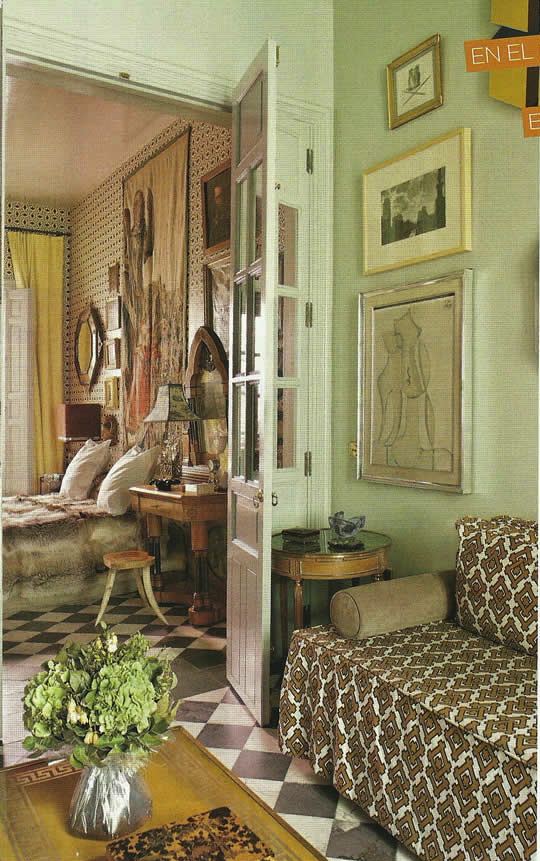 A view from the sitting room into the master bedroom. 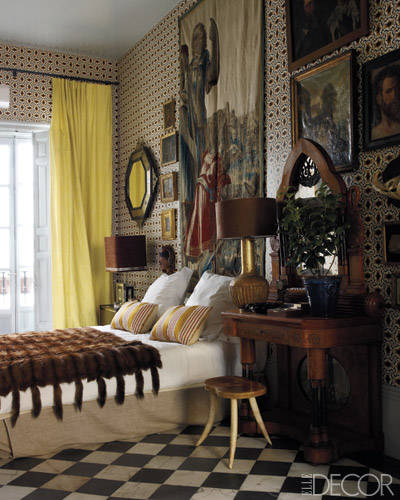 The master bedroom includes a tapestry by Rubens, a 17th-century octagonal mirror, and a 19th-century neo-Gothic dressing table; the wallpaper was designed by Castillo. 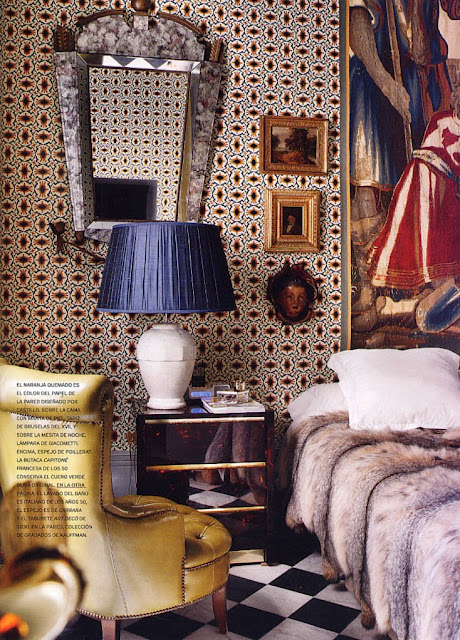 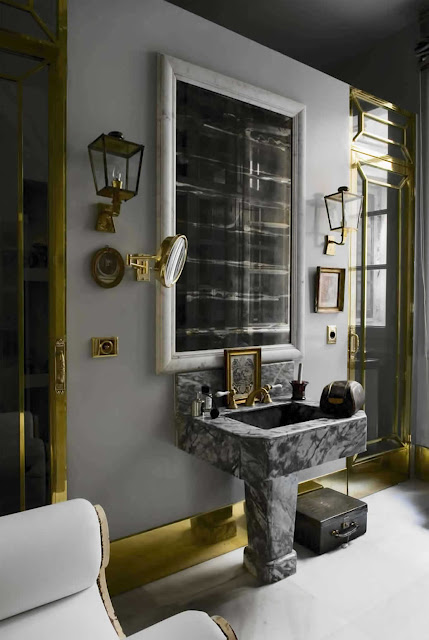 A 1950s Italian sink in the master bath; the large mirror is by Devon & Devon, and the walls are painted in Farrow & Ball’s Babouche. 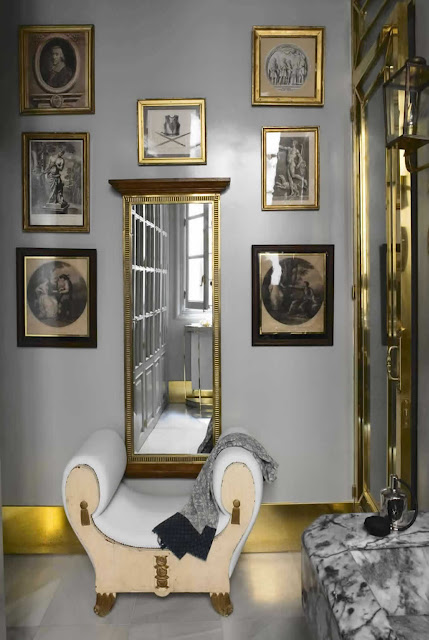 Another view of the master bathroom. 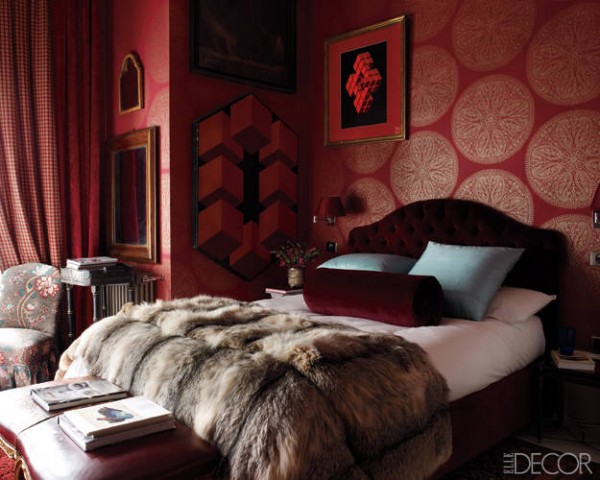 In the guest bedroom, a headboard upholstered in a Valentino velvet, a Louis XV–style bench, and 17th- and 18th-century Spanish mirrors; the paintings are by ­Yturralde, and the wallpaper is by Sanderson.

I hope you enjoyed the tour and are as captivated by chez Castillo as I have been, and remain.

All photos watermarked Elle Decor photographed by Simon Upton. All other images courtesy of Lorenzo Castillo.