Margaret Rogers came to America from Ireland to stay with relatives after the death of her half-brother’s father. Bonds were made and Margaret decided to stay on, eventually marrying Charles Whiting. Here, in New York’s Columbia County, she brought to life her dream of building an 18th-century Irish Neoclassical temple. 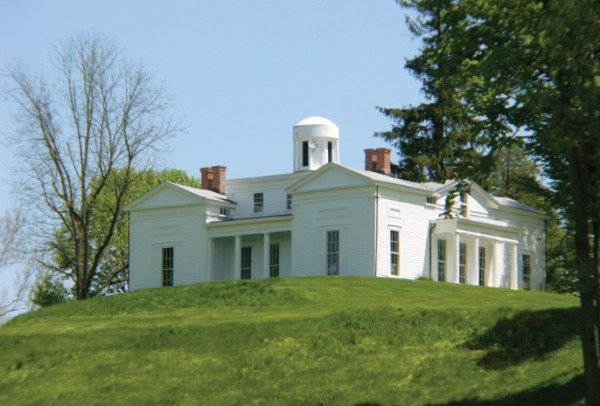 Fifteen years ago Crow Hill fell into the hands of one John Knott by chance. Yes, the same John Knott who owns Quadrille Wallpapers and Fabrics. For years he put off requests by his friend, Eric Bowman, to photograph Crow Hill. But when upkeep and maintenance proved too much he decided to list Crow Hill on the market and invited Bowman in to record what is now but a memory. The results landed on the pages of the February, 2013, issue of The World of Interiors, from which this post is based. His photographs and back story offer us a glimpse into the recent, and past, life of a Neoclassical temple on a hill that, until recently, has remained virtually unknown, certainly unseen, by many. 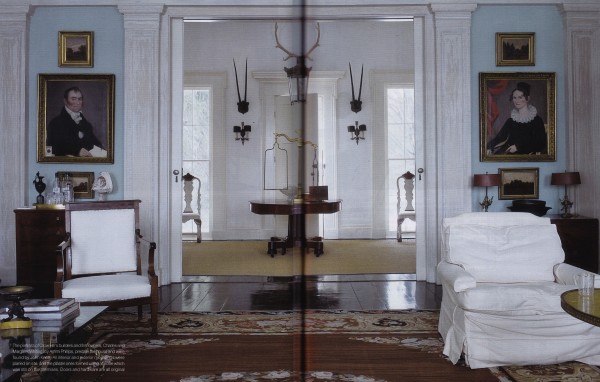 The portraits of Crow Hill’s builders and first owners, Charles and Margaret Whiting, by Ammi Philips, predate the house and were found by John Knott. All interior and exterior moldings were planed on site, and the plaster ones formed using a profile which was still on the premises. Doors and hardware are all original. (Courtesy of The World of Interiors)

The romance of the past, of a simpler time, lives on in the refined and restrained rooms at Crow Hill. There is nary a reminder that the owner of one of American’s finest fabric and wall-covering houses lives here. Aside from a faint reference to paisley – a pattern that is over-scaled and barely there – on a living room sofa, a company known for its contemporary take on Orientalist themes is absent in these rooms. Instead, they feel as though they could come from a number of places and times in the past –  from British Colonial Africa to Colonial era West Virginia; or perhaps a hunting lodge in the Irish countryside. 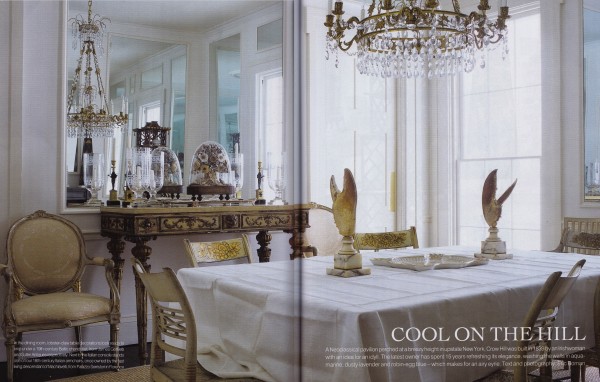 The neoclassical influenced decor of the dining room is the most elaborate in the house. The dining room was converted from two smaller bedrooms. 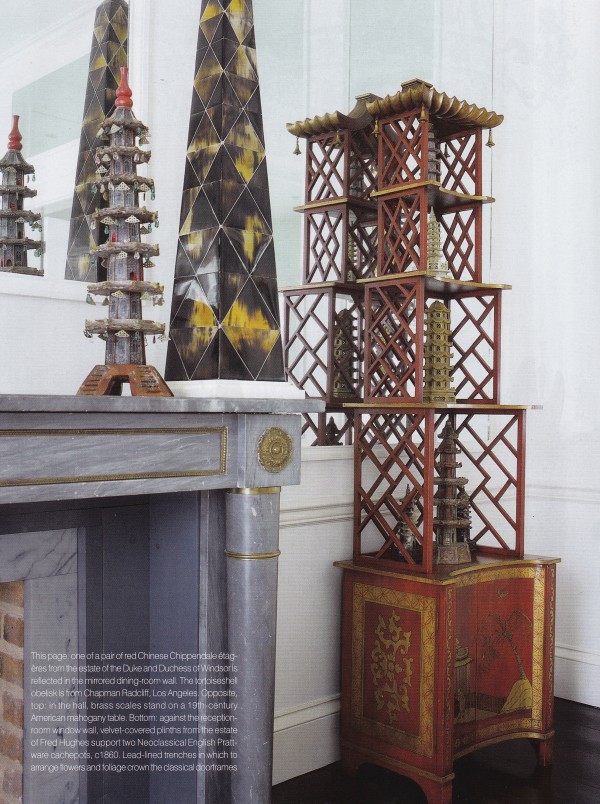 The rooms cool palette of varying shades of pale blue and Neoclassical furnishings evokes, for me, a Neoclassical pavilion in Sweden, where in the winter days are short and natural light rare. I recall walking up Store Kongensgade in Copenhagen, Denmark, on a winter’s afternoon in near darkness, mesmerized by the twinkling lights – candles mostly – in the windows of homes and shops. The magic they created turned the unfriendly cold of a northern European winter’s afternoon into a welcoming succession of warm, glowing light. I imagine that is how these rooms must have appeared in a Columbia County winter, glowing on the outside as much as inside. And how cooling these rooms must have felt, emotionally and physically, on a hot summer’s day, doors and vast Georgian windows ajar to allow soft breezes to pass through. On certain occasions over the summer months the tops of the door frames of the gallery and reception room would have been planted with moss and maidenhair fern in lead-lined top moldings, adding a touch of whimsy to the refined beauty of the whole. 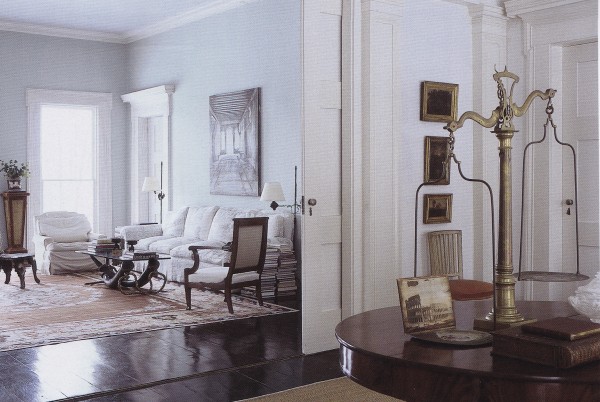 A view from the entry hall into the reception room. 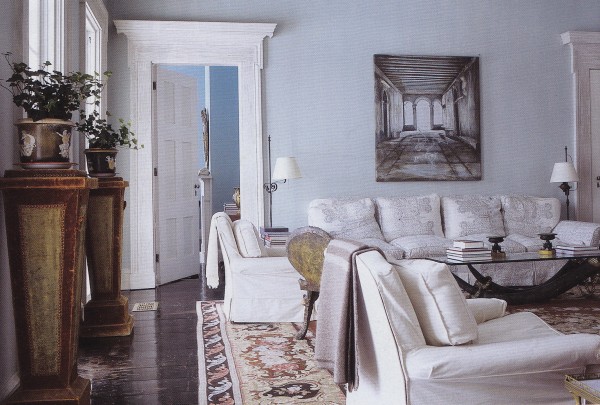 What I love about these rooms, and others like them, is their spare elegance. They stand the test of time without failing to delight or nurture. There is a comforting safety in the classical proportions of a house built upon a symmetrical Palladian plan, with rooms of both generous and cozy proportions. They speak of a well-traveled owner who is decidedly American – evidenced by a pair of red Chinese Chippendale étagère from the estate of the Duke and Duchess of Windsor, a set of four 18th-century Italian armchairs once owned by the last living descendants of Machiavelli (from the Palazzo Serristori in Florence), and a 19th-century Baltic chandelier in the dining room, to the 19th-century American mahogany center table in the gallery and American Empire furniture in the main reception room, north sitting room, and bedrooms. 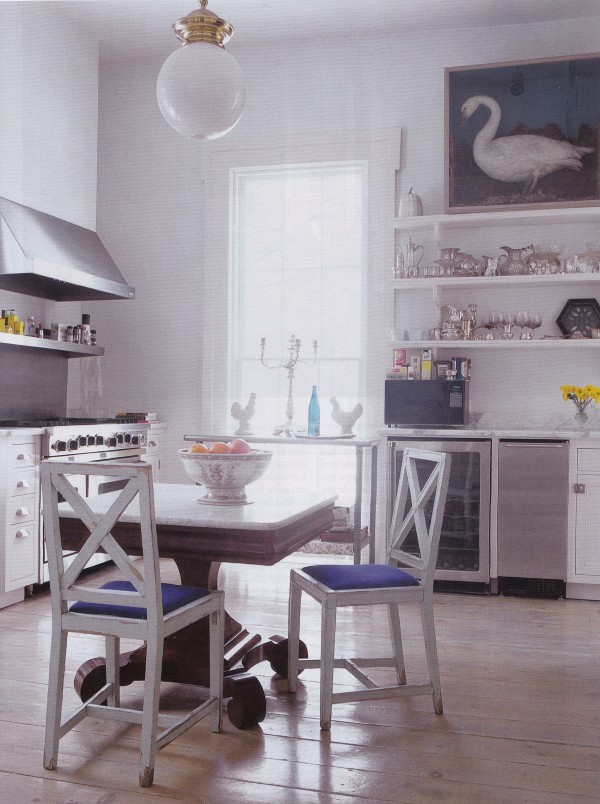 A glass-encased taxidermied swan from Norton Antiques in Chicago peers down at a marble-topped American Empire center table. The Swedish-appearing chairs are from Vince Mulford, Hudson, New York. (Courtesy The World of Interiors) 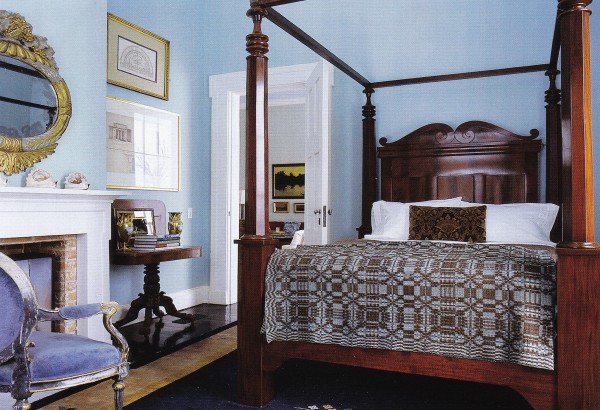 A 19th-century American Empire mahogany four-poster dominates the blue bedroom. The gilt gesso mirror above the mantel is also American, as is the carved card table. The Italian armchair is part of the Machiavelli set in the dining room. (Courtesy of The World of Interiors) 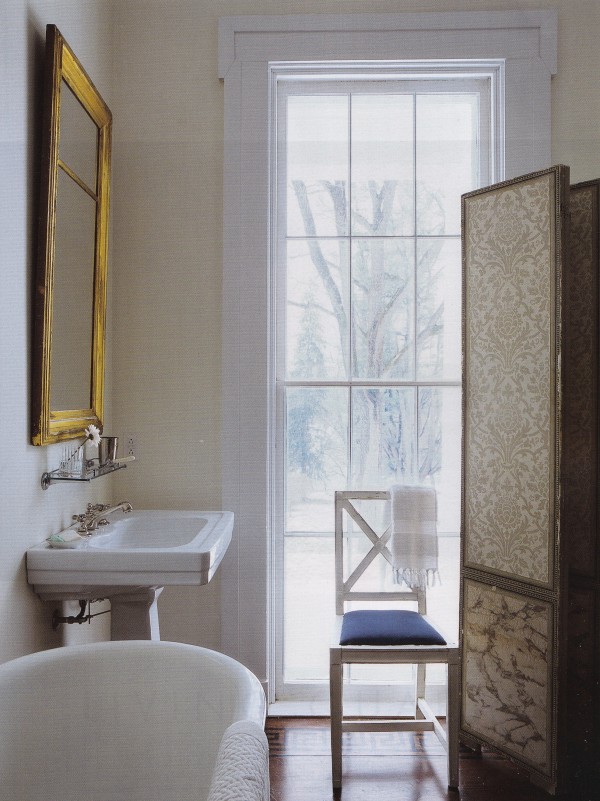 The bathroom shows one of the weighted, double-hung windows with their unique Columbia County feature: they glide into overhead pockets, allowing them to function as doors during warm weather. The privacy screen is from Angus Wilkie in New York. (Courtesy of The World of Interiors)

As is my nature, I usually do additional sleuthing on a subject in hope of discovering interesting morsels of additional insight and intrigue. While I didn’t come across anything in the way of intrigue, I thought you may be interested in the following photos I discovered on real estate agent Gary Di Mauro’s website, offering us additional vantage points from which to appreciate this fine property. Enjoy!

Previous content taken from The World of Interiors February, 2013, issue written and photographed by Eric Bowman. 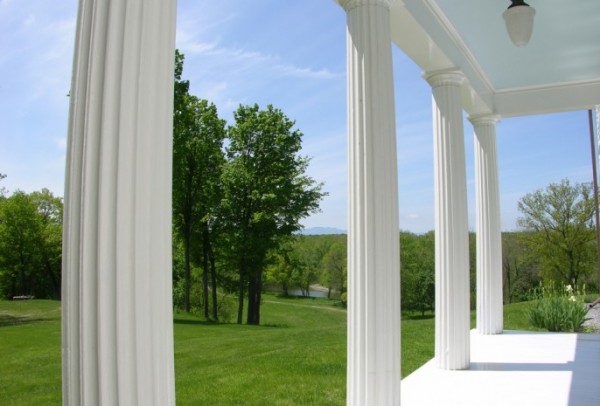 The portico at Crow Hill 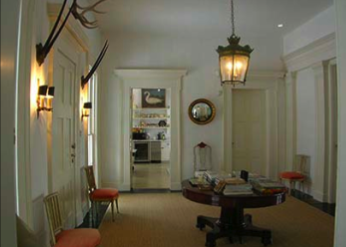 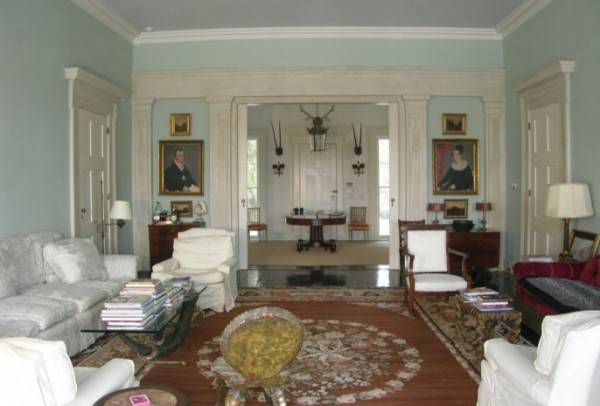 The reception room looking toward the gallery. 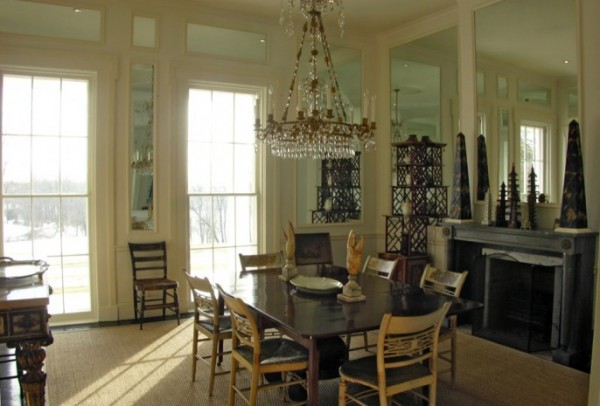 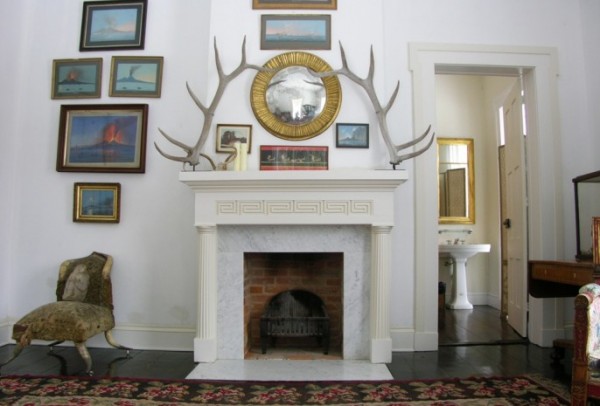 The fireplace wall in the north sitting room. 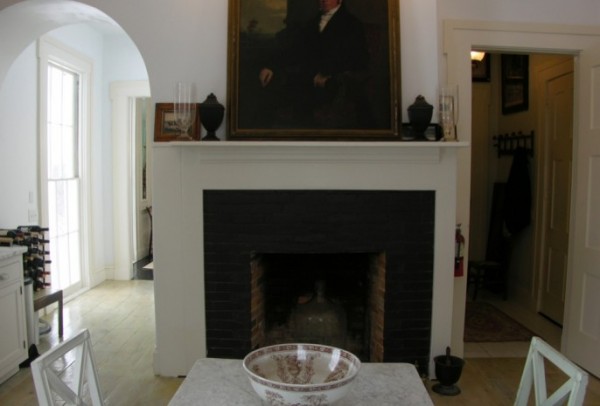 The fireplace wall in the kitchen. 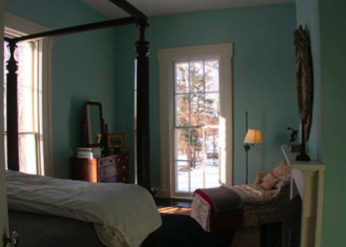 One of the five bedrooms. 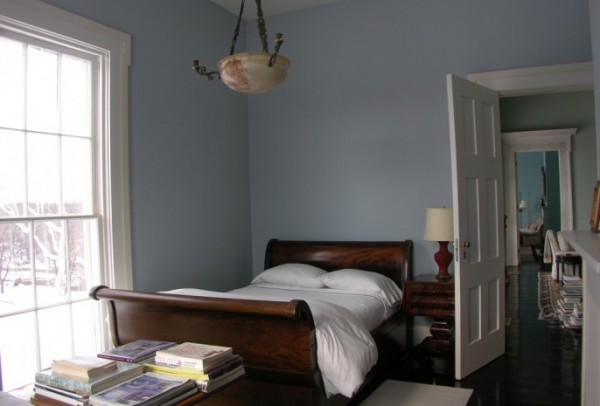 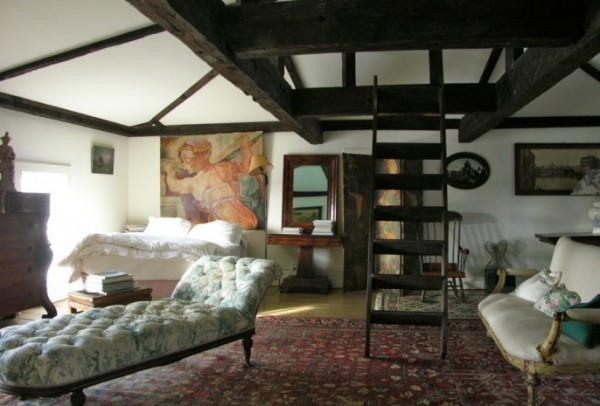