Fresh from the Caribbean and a recent lazy Sunday afternoon viewing the movie Out of Africa I’m feeling the call of expat life in a far-off exotic locale. Today’s post takes us to Tangier; specifically, to the recently renovated Villa Léon l’Africain purchased in 2007 by founder-in-part of the fashion house Yves Saint Laurent. 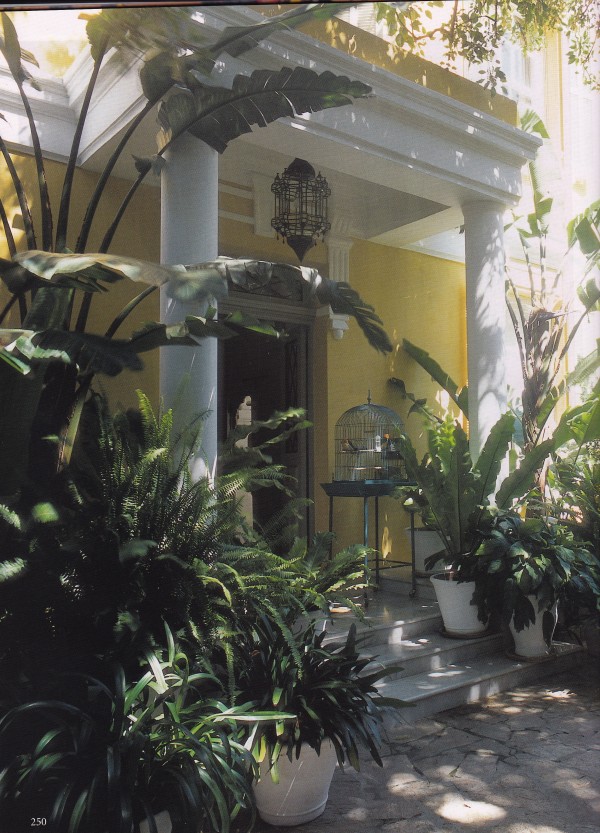 Generally recognized as the most beautiful example of French-colonial-style in Morocco, the villa Leo Africanus owes its name to Hassan al-Wazzan, born in Granada in 1490, who, in the 16th century, fled Spain during the Christian Roconquista under the auspices of Pope Leo X, and settled in Fez, where he became a diplomat and scholar. Captured by pirates in 1518 and sold into slavery, al-Wazzan was offered as a gift to Pope Leo X, who baptized him Léon l’Africain. Located in the heart of Tangier, the villa was built by a French lawyer in 1912 in the Riviera Style, who named it Villa Léon l’Africain. The aesthete and art historian Richard Timwelle came to settle in 1967 after retiring from Sotheby. He brought with him the possessions of a lifetime. In 1984 antiques dealer Christopher Gibbs acquired it. The scant few photos I could locate offers a glimpse into their world before it was recently purchased and renovated by Pierre Bergé in 2007. 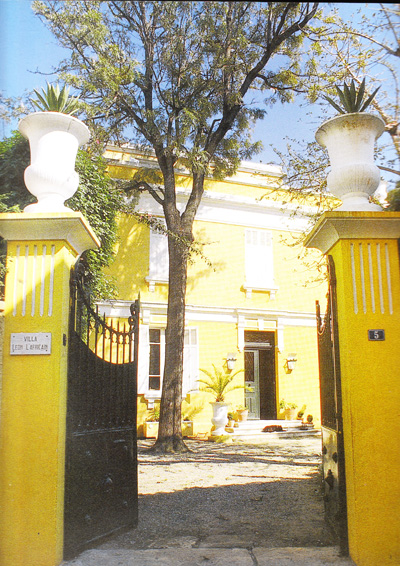 The villa prior to restoration by Studio KO and landscaping by Madison Cox. Note the absence of the portico. 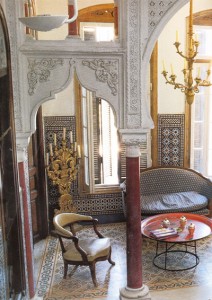 This photo is attributed to Richard Timwelle by a real-estate agency representing the property prior to Bergé’s purchase of it. However, it could be of a later time and owner, possibly that of Christopher Gibbs.

This view towards the dining room, also attributed to Richard Timwelle, could very easily be the environs of Christopher Gibbs. If viewers have greater insight into the origins of these photos I would greatly appreciate your feedback. 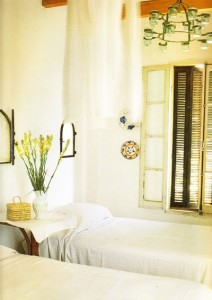 This last archival photo attributed to Timwelle reveals simplicity and calm in a guest room.

Soon after the death of Yves Saint Laurent Pierre Bergé, his partner, sold off their beloved Villa Mabrouka, also in Tangier, with the desire to downsize and simplify his life. Bergé first saw the villa in 1976, at a lunch with decorators Madeleine Castaing and Jacques Grange, who had rented it for the summer. Bergé remembers, while appearing worn and faded, it holding a magical quality. Thirty-one years later he would come to purchase it from Gibbs and set about renovating the house and gardens with the assistance of architects Olivier Marty and Karl Fournier and garden designer Madison Cox. The renovation turned into a major undertaking, creating virtually all-new spaces within the original structure. You will  be hard-pressed to uncover vestiges of its original decor in these photos. 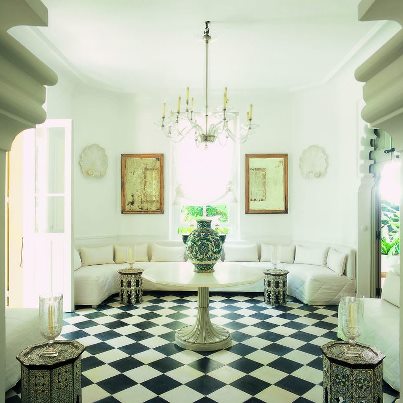 In the new house, rooms of near monastic simplicity contrast starkly with the collections-packed environments so often associated with Yves Saint Laurent and Pierre Bergé. The pristine Salon Marocain is awash in white – white plaster walls, white quilted cotton banquette covers (inspired by the Polo Bar at the Taj Rambagh hotel), diaphanous white window shades, white plaster shell sconces, and a white center table – with graphic black-and-white tinted cement tiles underfoot and an ethereal 1940’s Murano chandelier floating above. Adding to a feeling of transcendence are a pair of carved and etched late 19th-century Indian mirrors and fluted crystal hurricanes atop mother-of-pearl side tables from Syria. On the center table is a pottery jar in the Iznik taste. 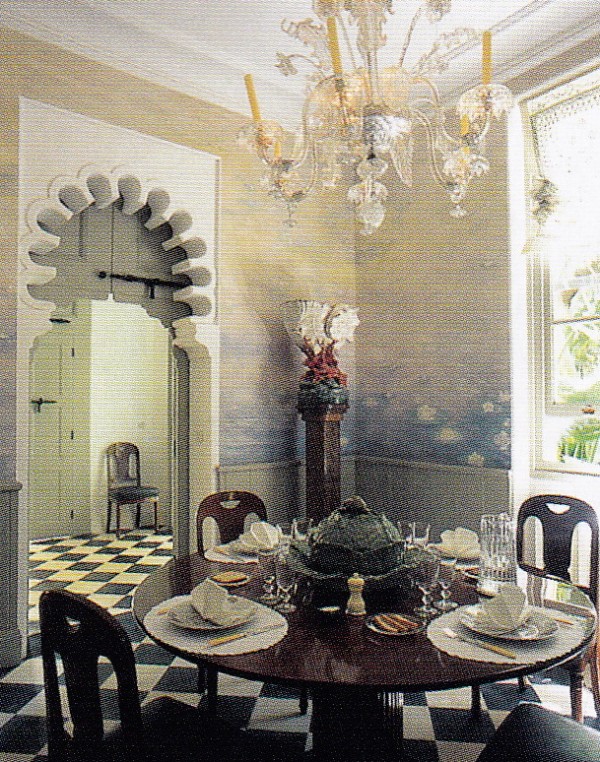 A mural of Monet-esque water lilies by Mériguet-Carrère envelops the dining room – a nostalgic reminder of the salon in their former Deauville residence. The ceramic coquillage sculpture in the corner is 19-century Minton. The crenelated arch of the doorway was added by the architects. 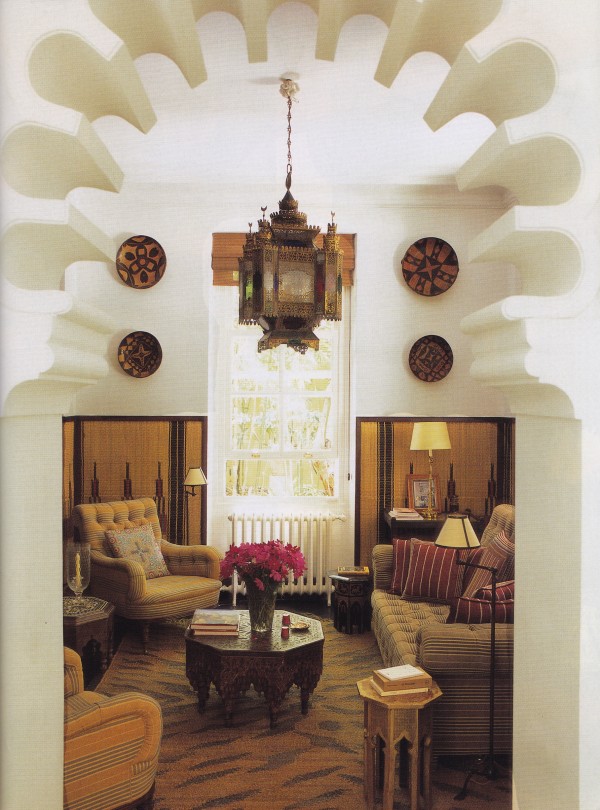 In the Petit Salon, a crenelated horseshoe arch visually frames Berber platters and a Turkish lantern. Here, aficionados of le Style YSL and Pierre Bergé a la Morocain will recognize furniture and decorative arts taken from their previous Villa Oasis and Villa Mabrouka decorated by Jacques Grange. Gone are the bibelot laden tables in favor of spare and simple elegance. A cozy and masculine cabinet of a room to escape cool weather, read, or imbibe a brandy. 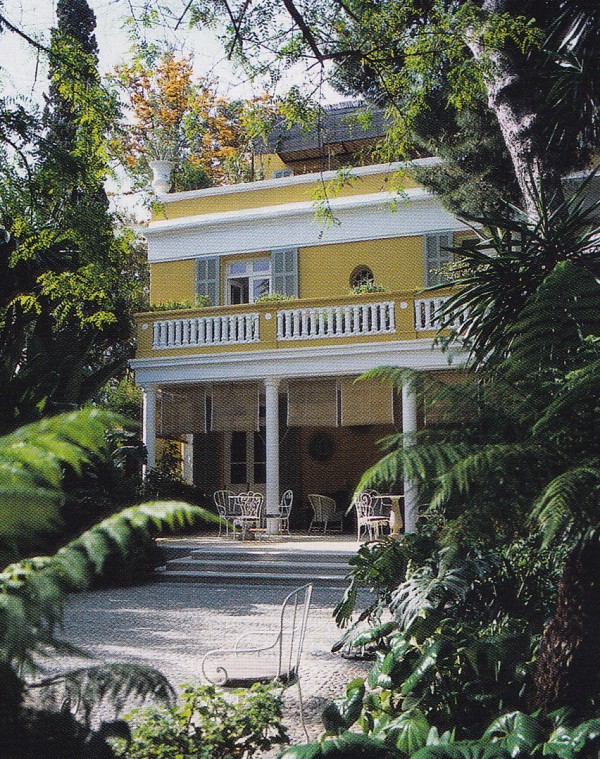 A perimeter path leads to the gardener’s cottage. 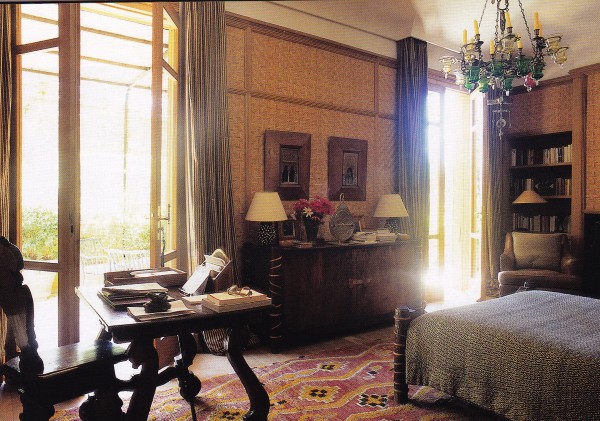 A commode by Jean Royère, and a 17-century Spanish table, grace the handsome straw-paneled master bedroom. 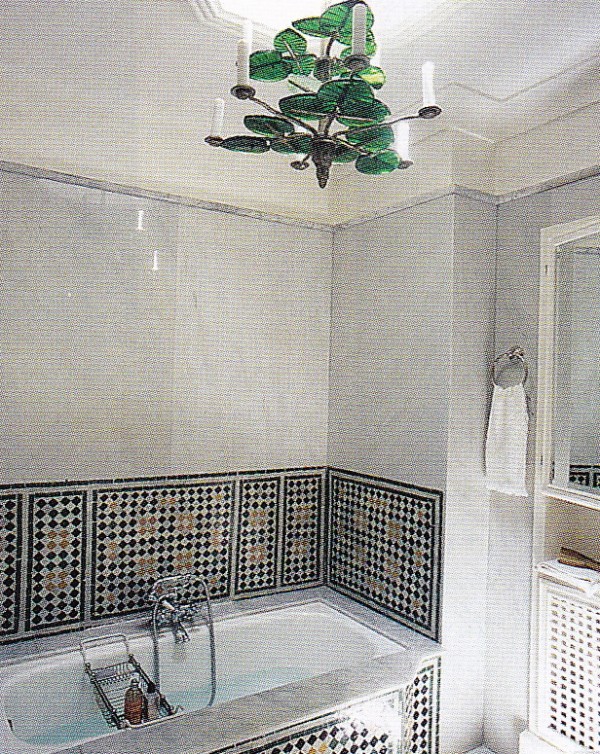 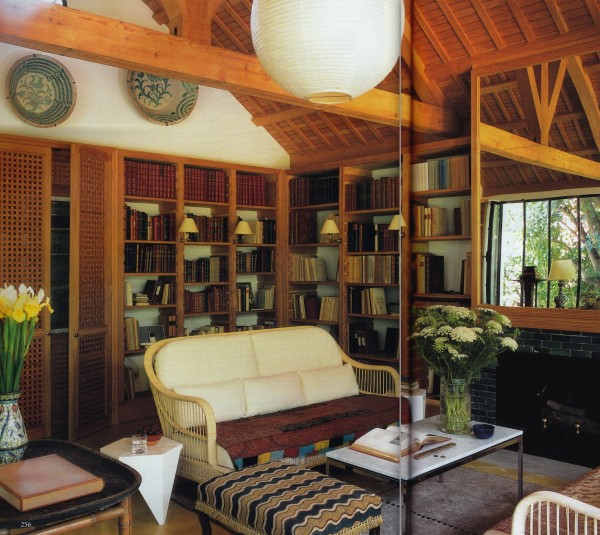 Above the garage is a newly built library with cedar shelving housing Bergé’s collection of books on North Africa. The walls are sheathed in straw matting designed by the architects. An eclectic mix of European elements (wicker furniture designed in Lake Como and a carved-wood and bamboo table to the left designed by Emile Gallé), Asian (a paper lantern and metal Prismatic side tables from the Noguchi Museum in New York) and Modernist (a Florence Knoll steel and Carrara marble topped cocktail table) is a modern departure from the rooms Pierre once inhabited. “It’s important to be one with your time. I am not someone who thinks that everything was better in the past. Léon l’Africain suits me in every way: I don’t want to be isolated behind barriers of wealth, and I don’t want to live in a ghetto of rich people. The show-off life is not for me.” It is this quality of living that will keep me coming back time and again to soak up chez Bergé. 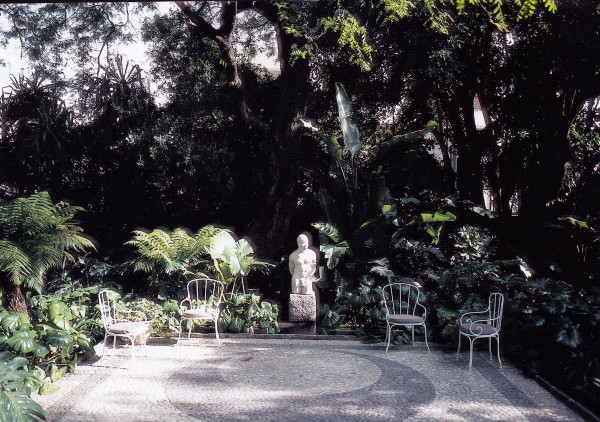