Back to Out of Africa

On this cool, rainy Sunday afternoon, fresh from viewing Out of Africa, I’m feeling a tad nostalgic, if not romantic. Perhaps it’s the weather; or, perhaps it’s the breathtaking scenery and gorgeous cinematography and period set design of this epic movie that has transformed my mood. As you may already know, the movie is set in British East Africa, now Kenya, based loosely on the autobiographical book Out of Africa written by Isaak Dinesen (the pseudonym of Danish author Karen Blixen), which was published in 1937. Karen Blixen, played by Meryl Streep, enters into a marriage of convenience before moving to Africa. Here she sets up house with a shipment of some of her most treasured possessions. Though Blixen was Danish and the house used in the movie was not the actual home of Blixen (her actual home is now a museum) the set designers gave the interiors a decidedly British Colonial style. 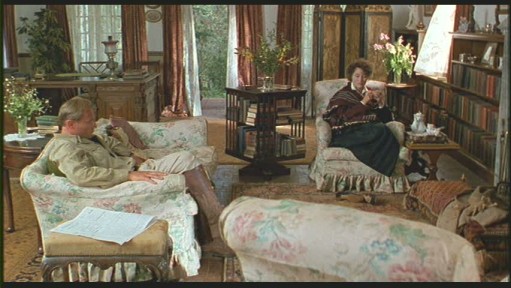 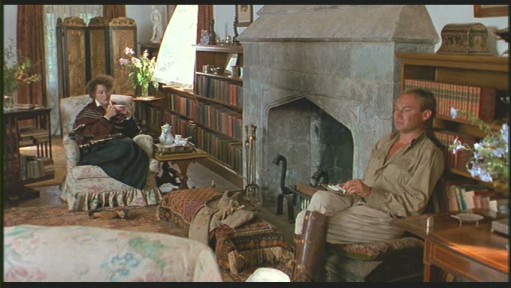 Is it nostalgia, or does this room appear just as relevant and timeless today? Certainly, there is a current craze for all things British. Yet, there is a quiet confidence to these rooms that stand the test of time. The seating appears deep and comfortable, intimately arranged around the fireplace, slip-covered in faded, washed cotton. An Arts & Crafts rotating books table offers easy access to favorite reads. Low profile bookcases line the walls, inviting learned escapism. There is a desk attractively positioned at the window to write at. Stools and small tables are at the ready for multiple usage. An Oriental rug adds a dash of subdued exoticism, and curtains the color of earth creates a warm cocoon. Plants and flowers from the garden, and afternoon tea, welcome us into their colonial fantasy. For all the furniture it doesn’t appear crowded for the use of mostly pale and painted wood finishes. 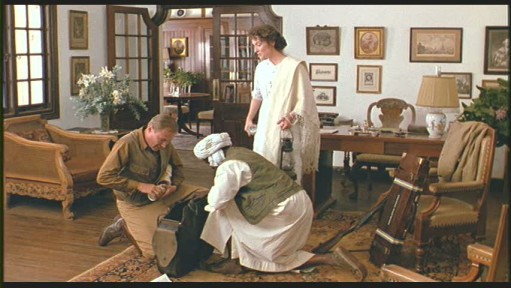 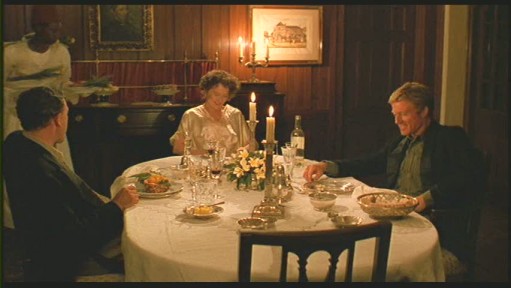 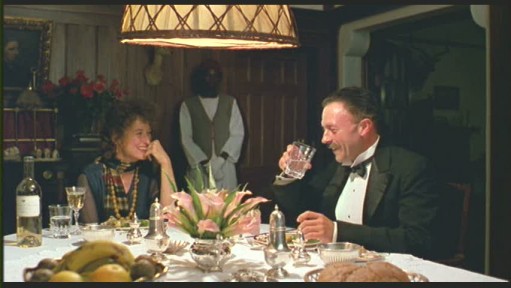 The warm glow of the paneled dining room is off-set by a table set with gleaming silver candlesticks and bowls, and a crisp white table cloth, and what appears to be a Sheraton style sideboard supporting silver candelabras and a silver or brass tiered surface shelving – although it appears to be just a decorative railing, and perhaps is just that. In the last photo daylight reflects off the polished mahogany dining table and a display shelf at door height holds a collection of black and white plates, adding and interesting graphic, almost architectural, element, like medallions. 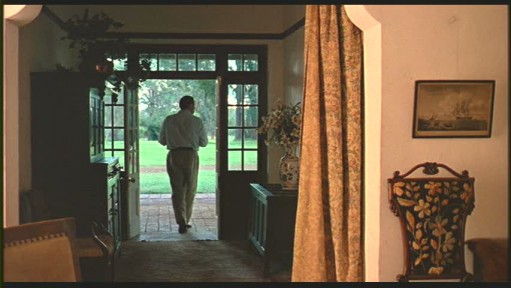 Portieres, in what appear to be heavy velvet damask, frame a passage into the front hall. At right a painted floral motif hall chair is a personal reference to the character’s Danish heritage. A warm, golden hue imbues romantic visions of quiet comfort and civility. 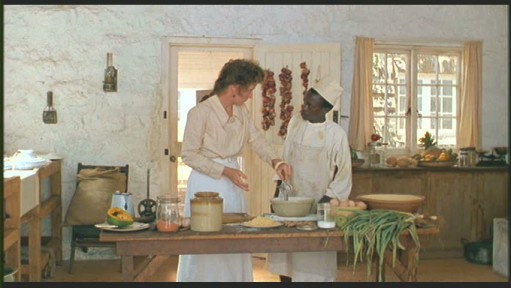 How is that Meryl Streep always gets the best houses, with the best kitchens, for the parts she plays? I think the kitchen from her movie It’s Complicated received more reviews than the movie itself! Here, in this kitchen in British East Africa, pale golden-hued farm tables and work surfaces, white plaster walls, unlined cotton curtains, and simple crockery create a timeless, easy country house aesthetic. Here, natural materials and simple lines predominate, where produce from the garden is decoration enough. 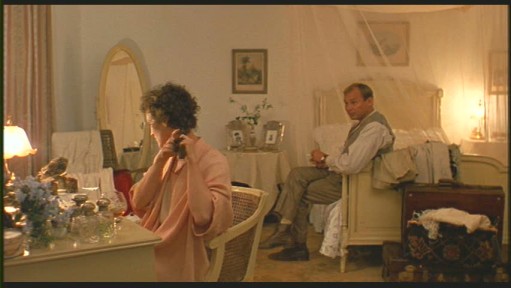 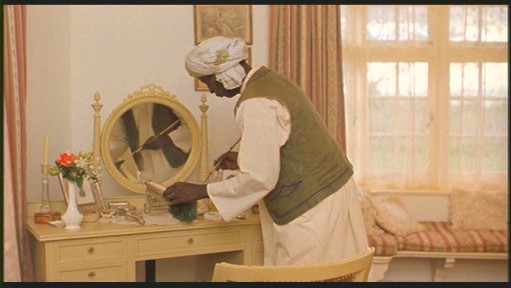 The style of furniture used in the bedroom is a departure from the darker furniture found elsewhere in the house. Here, pickled, or perhaps painted, furniture introduces a Scandinavian taste for light finishes. This, apparently, was based on actual pieces once owned by Karen Blixen. According to stories I read some of those pieces were located and used in the movie. I don’t get a particular calling to nostalgia viewing these photos of her bedroom, but I thought my viewers appetite for detail would be reason enough to include them. Photos of very few of the actual rooms are available on the Internet; what I did find were underwhelming, so decided not to include them in this post. If you decide to explore further you’ll find that the bedroom furniture is very similar to what was used in the movie. As for the other rooms there are no comparisons. 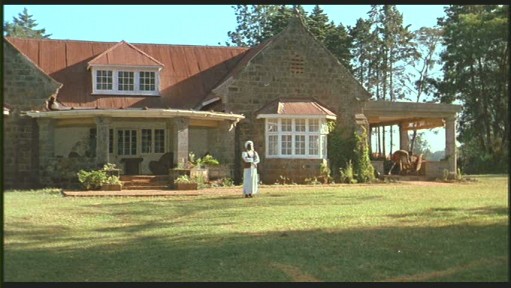 The actual house that Karen Blixen lived in was not available at the time of shooting Out of Africa. This Dutch Colonial-style house, built of mud bricks in the traditional vernacular, was mildly altered with the addition of a bay window, shown above. In true British Colonial style, a colonnaded veranda runs alongside the house instead of across the front and or the back. 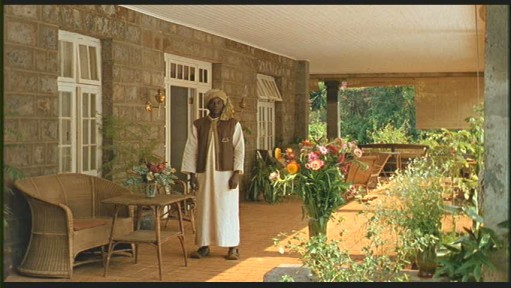 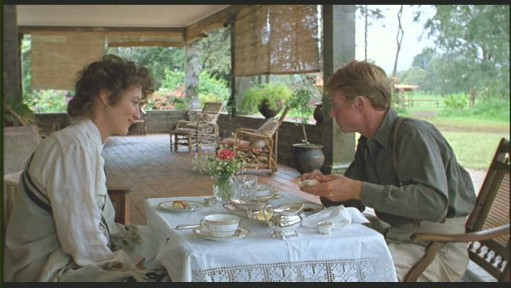 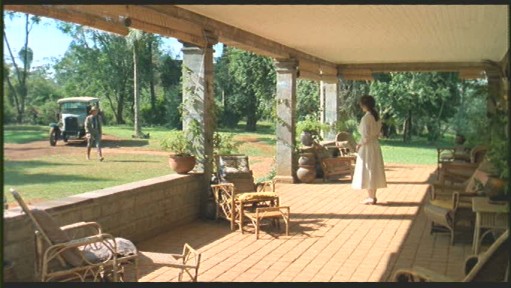 The deep, accommodating veranda provides a cool respite from the intense heat and an alternative living space. Victorian style wicker furniture, British Colonial mahogany and cane campaign-style chairs, and flowers from the garden creates a unified, relaxed atmosphere to soak in the dramatic East African landscape.

My taste for British Colonial style is sure to be fleeting. For those of you who are occasionally romantic, like myself, I hope you enjoyed this walk down memory lane. Could it be that my finger is on the pulse of the next revival style? Well … don’t make any bets just yet! Only when Out of Africa. 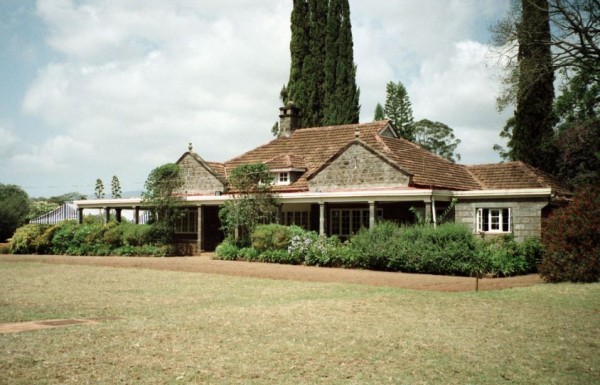 2 Responses to Back to Out of Africa