Villa Tre Ville – Then and Now

The opening introduction on Villa Tre Ville’s website – the Amalfitani home of Franco Zeffirelli until 2009 – reads:

At Villa Tre Ville, there has always been an atmosphere of art and culture. The property was bought around the 1920s by Mikhail Semenov, the Russian writer, who was the first to gather around him that cultural ferment that has always characterized Positano. With Franco Zeffirelli, the property was often visited by dancers, musicians, painters, intellectuals and artists: Liz Taylor and her husbands, Leonard Bernstein, Laurence Olivier, Maria Callas, Liza Minnelli, Elton John, Carla Fracci, to name just a few. Leonard Bernstein wrote the music for the film ‘Brother Sun, Sister Moon’ here, and it was also here that Zeffirelli conceived of his greatest theater works, as well as some of his most important screenplays. 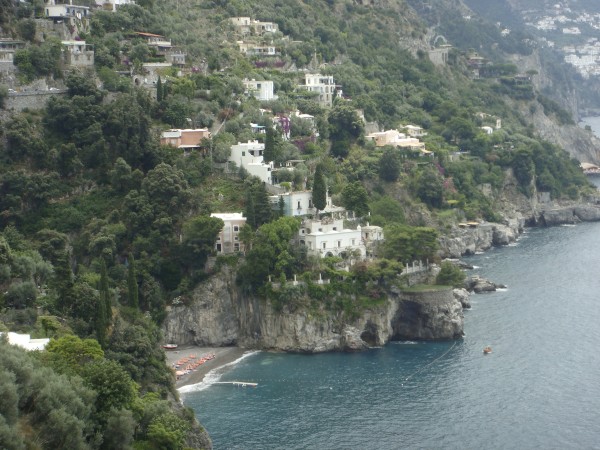 Villa Tre Ville comprises three villas on a promontory overlooking the Terranean sea and the town of Positano. Photo by Cristopher Worthland.

In  2009 my partner and I returned to Positano for the second time, renting a villa – Villa Maura – with friends, located directly behind Zeffirelli’s Tre Ville (you can read about Villa Maura here). I knew in advance from the rental agency’s description of Villa Maura that Mr. Zeffirelli’s villa was just below it. Eager to explore we set out in search of signs of Mr. Zeffirelli only to discover he had sold it and moved out. We were told “a woman” purchased Tre Ville and Le Galli – the small island off the coast that Rudolf Nureyev once owned – for $50 million. It was to become the only luxury boutique hotel on the Amalfi coast of its kind. During our week-long stay  we watched over the renovation the aged villa from above. 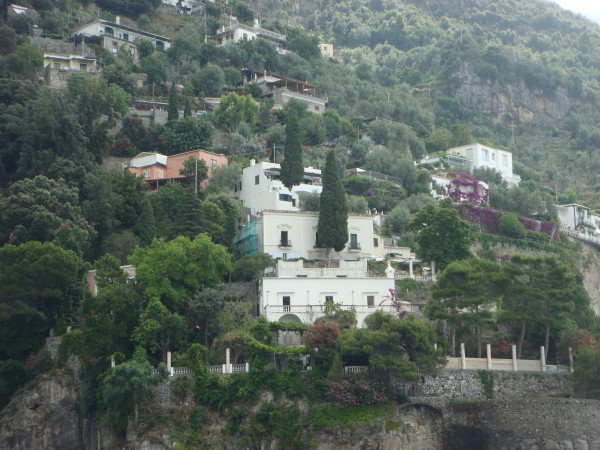 A closer view of Tre Ville while under renovation in 2009. Villa Maura sits directly above it, next to the salmon painted villa. Photo by Cristopher Worthland.

Franco Zeffirelli discovered Tre Ville in the 1960’s and purchased it as a retreat from his hectic schedule, and eventually retired there. In his later years he found the vertiginous landscape of Positano, with its many steps and elevations, difficult to navigate and decided to sell, one can imagine, reluctantly. If only these wall could talk.

Franco Zeffirelli photographed in one of Villa Tre Ville’s salons sometime in the 1980’s. Photograph by Slim Aarons. 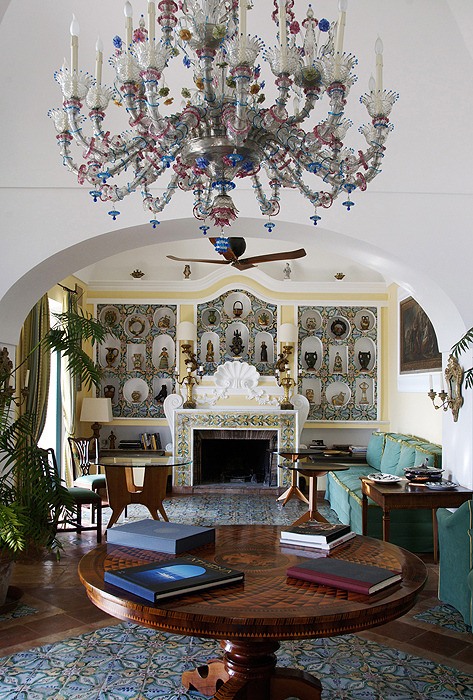 The same sitting area off the entrance hall appears much the same today as it did then. 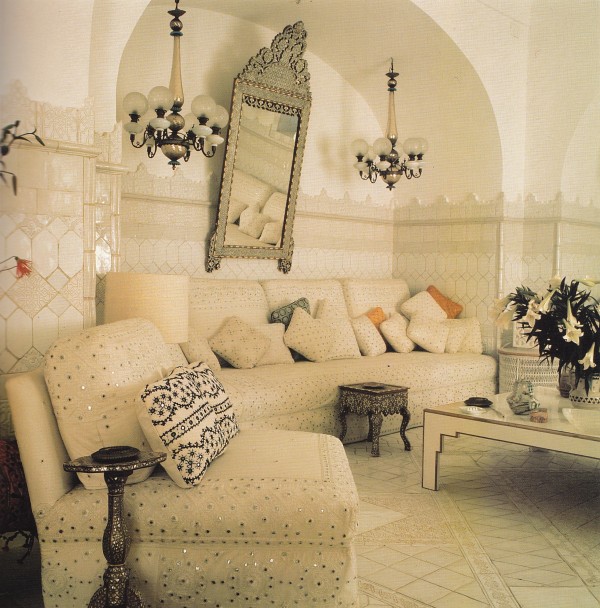 Zeffirelli hired his friend Renzo Mongiardino, who collaborated on many of his theater and opera projects, to design the interiors of Tre Ville. The arched and tiled salon evokes Moroccan exoticism in an oasis of white, featuring banquettes covered with mirrored Indian fabric and 19th-century Libyan furniture. 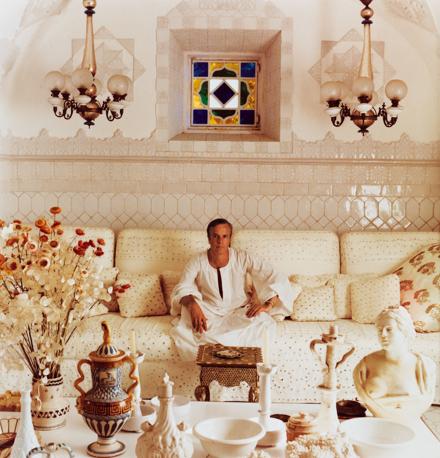 Franco Zeffirelli in the white salon, photographed in the 1980’s by Slim Aaron. 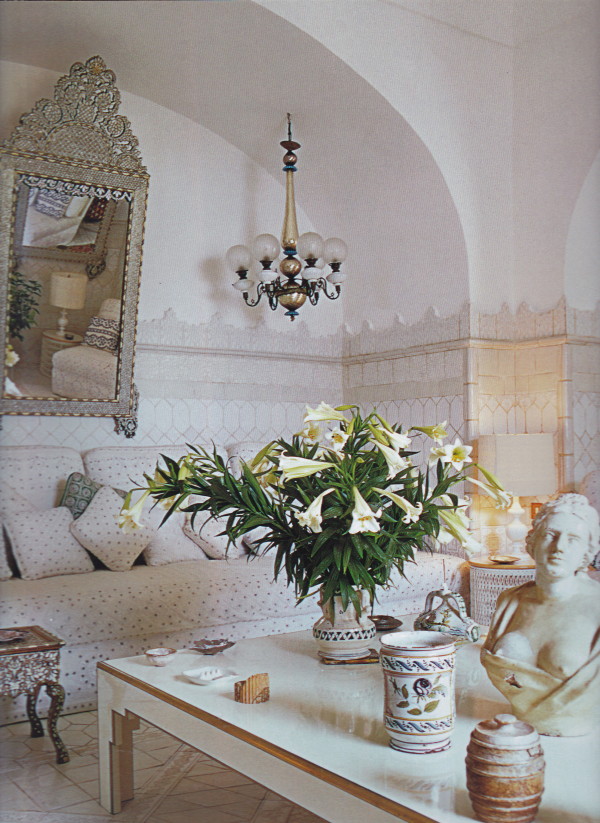 Another view of the white salon originally photographed by Horst for Vogue.

The decoration of the white salon remains virtually unchanged today since photographed by Horst in the 1970’s, utilizing the same mirrored Indian fabric on pillows, Libyanese mirror, cocktail table and antique glass chandeliers. 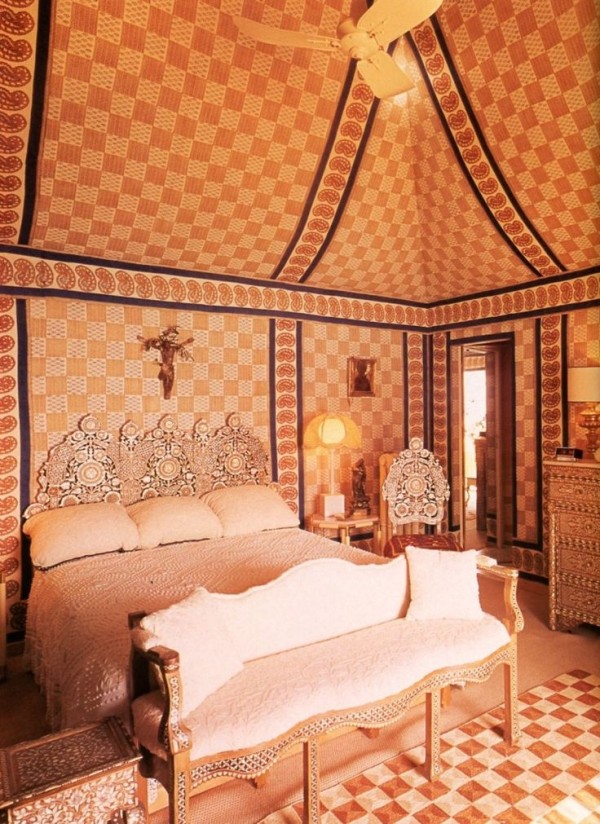 Zeffirelli’s famous bedroom was tented by Mongiardino with a checkerboard pattern from the Far East and furnished with inlaid mother-of-pearl antiques from Libya. 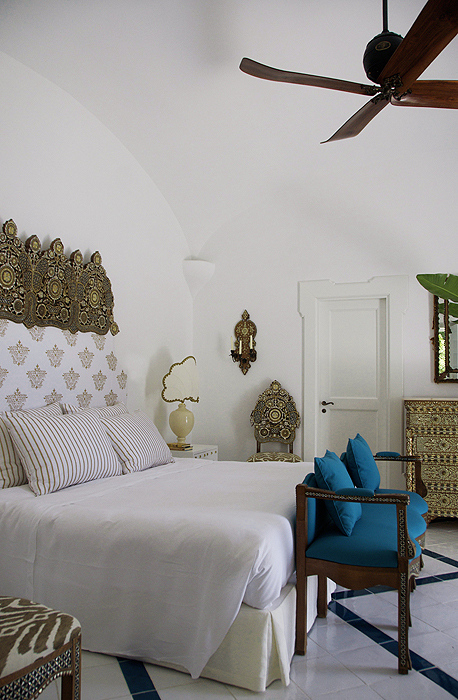 A guest suite in one of the hotel’s three villas. 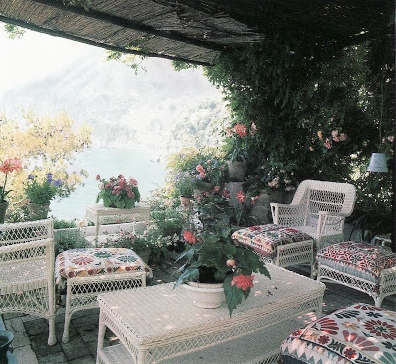 The veranda at the time of Zeffirelli was shaded with a straw roof hung with fragrant vines and furnished with old-fashioned white painted wicker furniture with brightly printed Indian cotton cushions. 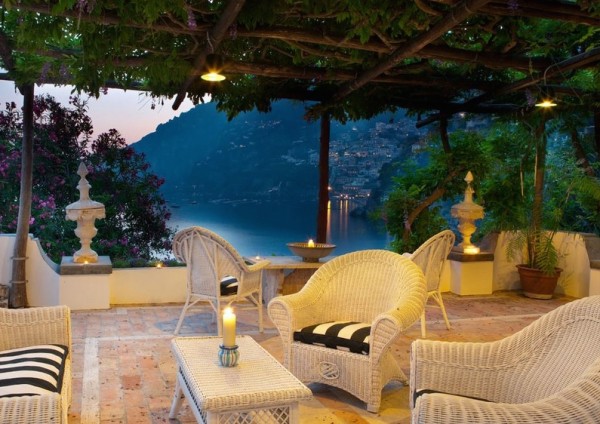 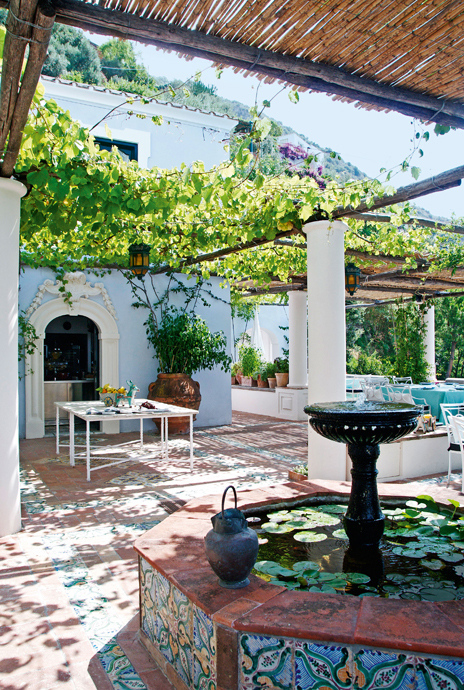 A terrace shaded by a vine-covered pergola is decorated with local Italian tiles. 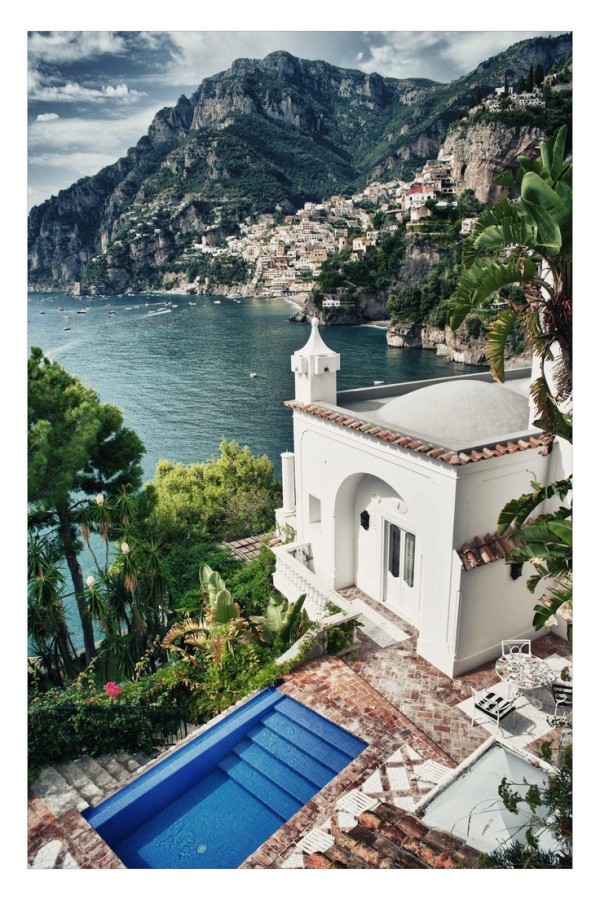 Though we were saddened to learn of Zeffirelli’s departure from his beloved Villa Tre Ville its new stewards have preserved a piece of Hollywood history with great panache and reverence for its illustrious past. Perhaps one day you and I will experience la dolce vita at Villa Tre Ville for ourselves!